Remote detection of forest disturbance remains a key area of interest for scientists and land managers. Subtle disturbances such as drought, disease, insect activity, and thinning harvests have a significant impact on carbon budgeting and forest productivity, but current change detection algorithms struggle to accurately identify them, especially over decadal timeframes. We introduce an algorithm called Edyn, which inputs a time series of residuals from harmonic regression into a control chart to signal low-magnitude, consistent deviations from the curve as disturbances. After signaling, Edyn retrains a new baseline curve. We compared Edyn with its parent algorithm (EWMACD—Exponentially Weighted Moving Average Change Detection) on over 3500 visually interpreted Landsat pixels from across the contiguous USA, with reference data for timing and type of disturbance. For disturbed forested pixels, Edyn had a mean per-pixel commission error of 31.1% and omission error of 70.0%, while commission and omission errors for EWMACD were 39.9% and 65.2%, respectively. Edyn had significantly less overall error than EWMACD (F1 = 0.19 versus F1 = 0.13). These patterns generally held for all of the reference data, including a direct comparison to other contemporary change detection algorithms, wherein Edyn and EWMACD were found to have lower omission error rates for a category of subtle changes over long periods. View Full-Text
Keywords: change detection; EWMACD; forest disturbance; Fourier; Landsat; quality control; remote sensing change detection; EWMACD; forest disturbance; Fourier; Landsat; quality control; remote sensing
►▼ Show Figures 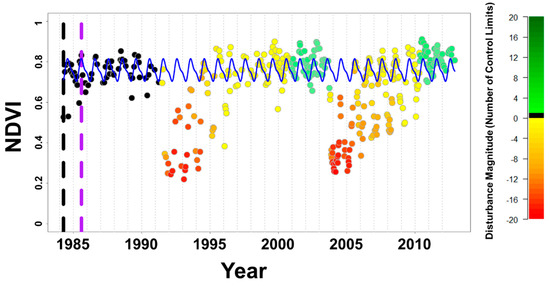