This study presents for the first time in Venezuela a joint analysis of deforestation and forest degradation processes, including its effects on carbon emissions. The Caparo Forest Reserve, located in the Western Plains ecoregion, in one of the national hot spots of deforestation, served as a case study using three different periods: 1990–2000, 2000–2010 and 2010–2015. In the context of the United Nations Framework Convention on Climate Change (UNFCCC) framework, the Practice Guidance for Land Use, Land-Use Change and Forestry from the Intergovernmental Panel on Climate Change (IPCC) was followed. These guidelines combine the activity data for the estimation of deforestation and degradation rates, in this case using open access Landsat imagery in conjunction with the TerraAmazon system with the emission factors, and these based on aboveground biomass (AGB) estimations using field data from permanent plots monitored during the study period. Deforestation was responsible of a net loss of −53,461 ha, while close to −3667 ha were classified as degraded forests during the 1990–2000 decade (−4.9% annual deforestation rate). An estimated area of −36,447 ha and −515 ha between 2000 and 2010 was affected by both processes (−4.3% annual forest loss), and −8111 ha and −737 ha between 2010 and 2015 (−3.2% per year). These processes were responsible for an estimated equivalent in carbon emissions of 2.21 ± 0.32 (SEM—Standard Error of the Mean) Mt CO2 year−1 (1990–2000), 1.56 ± 0.19 Mt CO2per year between 2000 and 2010, while 0.80 ± 0.11 Mt CO2 year−1 during the 2010–2015 period. Between 92.9% and 98.63% (mean 94.9%) of these emissions came from deforestation, and between 1.37% and 7.79% (mean 5.1%) from forest degradation. Using available data, at national scale, deforestation and forest degradation in Caparo represented, on average, 0.49% of the total CO2 emissions and about 1.79% of land use change related emissions for the same period in Venezuela. Finally, we briefly outline a set of elements so these results can serve as a baseline for the potential establishment of a Reducing Emissions from Deforestation and Forest Degradation (REDD+) strategy in the area. View Full-Text
Keywords: carbon; climate change; CO2 emissions; deforestation; forest degradation; REDD+; TerraAmazon carbon; climate change; CO2 emissions; deforestation; forest degradation; REDD+; TerraAmazon
►▼ Show Figures 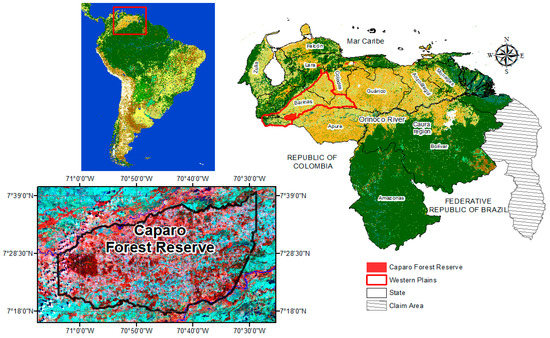