Teams at Their Core: Implementing an “All LANDS Approach to Conservation” Requires Focusing on Relationships, Teamwork Process, and Communications
Next Article in Special Issue

Predation on Early Recruitment in Mediterranean Forests after Prescribed Fires

Wildfires play a significant role in many different elements of Mediterranean forest ecosystems. In recent years, prescribed fires have started being used more often as a fuel reduction tool, and also as silvicultural treatment to help the regeneration and health improvement of stands. Apart from the fact that fire may alter microsite conditions, very little is known about the impact of prescribed burning on natural regeneration or plant species renewal in Mediterranean pine forests. Likewise, knowledge about the influence of seedling predators on post-fire regeneration is still scarce. In this study, we aimed to compare the effects of seedling predation on recruitment in earlier stages after prescribed burnings in three pine stands in Central Spain: a pure stand of Pinus nigra; a mixed stand of Pinus halepensis and Pinus pinaster and a mixed stand P. nigra with P. pinaster. In situ we superficially sowed seeds from two different species. In the sowing experiment, we tested two different seed provenances (drier and more humid spanish regions) for each species. In all, 60 plots (30 burned, 30 unburned) per site, with 10 seeding units per plot and more than 20,000 seeds, were used in the whole study. Seedling predation was evaluated by replicating the seeding units inside and outside a wire cage as protection for rodents and birds. Our results showed that prescribed fires alter initial seedling predation intensity: predation was significantly higher in the seedlings grown in the plots affected by prescribed fire. The individuals sown before the fire passed showed slightly more predation than those sown after fire passage. Provenances did not appear as an important predation drive. Understanding the role of the predation associated with these treatments can help improve Mediterranean pine forest management. View Full-Text
Keywords: seed emergence; seedling survival; Mediterranean forest; prescribed fires; ecological restoration seed emergence; seedling survival; Mediterranean forest; prescribed fires; ecological restoration
►▼ Show Figures 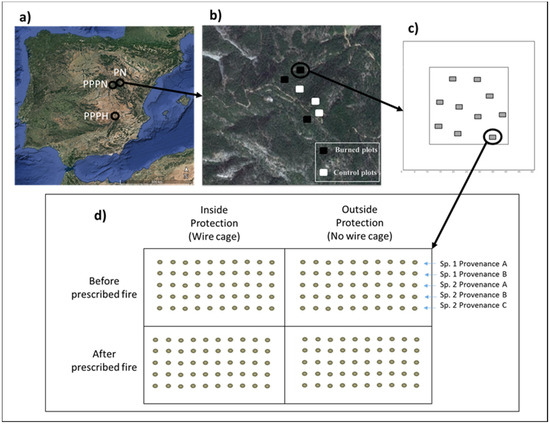