Livelihoods and Land Uses in Environmental Policy Approaches: The Case of PES and REDD+ in the Lam Dong Province of Vietnam

Forest resource information has a hierarchical structure: individual tree attributes are summed at the plot level and then in turn, plot-level estimates are used to derive stand or large-area estimates of forest resources. Due to this hierarchy, it is imperative that individual tree attributes are measured with accuracy and precision. With the widespread use of different measurement tools, it is also important to understand the expected degree of precision associated with these measurements. The most prevalent tree attributes measured in the field are tree species, stem diameter-at-breast-height (dbh), and tree height. For dbh and height, the most commonly used measuring devices are calipers and clinometers, respectively. The aim of our study was to characterize the precision of individual tree dbh and height measurements in boreal forest conditions when using calipers and clinometers. The data consisted of 319 sample trees at a study area in Evo, southern Finland. The sample trees were measured independently by four trained mensurationists. The standard deviation in tree dbh and height measurements was 0.3 cm (1.5%) and 0.5 m (2.9%), respectively. Precision was also assessed by tree species and tree size classes; however, there were no statistically significant differences between the mensurationists for dbh or height measurements. Our study offers insights into the expected precision of tree dbh and height as measured with the most commonly used devices. These results are important when using sample plot data in forest inventory applications, especially now, at a time when new tree attribute measurement techniques based on remote sensing are being developed and compared to the conventional caliper and clinometer measurements.
Keywords: precision; accuracy; diameter-at-breast-height; dbh; tree height; forest mensuration; clinometers; calipers; hypsometers; forest inventory precision; accuracy; diameter-at-breast-height; dbh; tree height; forest mensuration; clinometers; calipers; hypsometers; forest inventory

The study area is located in Evo, southern Finland (61.19° N, 25.11° E) approximately 100 km north of Helsinki. The area consists of ~2000 ha of forest land with a range of stand conditions from intensively managed to natural southern boreal forests. The average stand size is a little less than 1 ha and the stands are mainly even-aged and single layer. The elevation in the area varies from 125 m to 185 m above the sea level. The dominant tree species in the area are Scots Pine (Pinus sylvestris, L.) and Norway spruce (Picea Abies (L.) H. Karst.), covering 44.7% and 33.5% of the total stem volume, respectively. From the total stem volume, 21.8% are deciduous species. The site type varies from groves to barren heaths.

2.2. Workflow for Sampling of the Trees to Be Measured

Field measurements were carried out in the study area during the summer of 2014. In total, 120 field sample plots (32 m × 32 m) were mapped and measured. The aim of the field measurements was to provide reference data for many remote sensing focused research activities slated for implementation. The locations of the field sample plots were selected based on canopy density and height information derived from airborne laser scanning (ALS) data. Finally, field crews measured individual tree attributes for all the trees inside the selected 120 field sample plots (n = 9435). For this specific study, we selected a sub-sample of trees out of these 120 sample plots. Sample trees (n = 319) were selected based on tree attribute measurements to retain the maximal variation in dbh (range between 5.6 cm and 46.6 cm) and height (range between 5.0 m and 33.1 m). These steps are described in detail in the following subsections.

The sampling of the field sample plots was based on forest height- and canopy-density metrics derived from ALS-data; e.g., [44]. First, a systematic grid (32 m × 32 m) was placed over the study area and ALS metrics describing forest height and density were calculated for each grid cell from a canopy height model (CHM). ALS metrics included mean height of vegetation and proportional vegetation cover at the height of 2 m. Then, 120 field sample plots were selected to represent the entire height–density variation within the study area (Figure 1) excluding sapling stands and very sparse seed-tree locations. The sample plots were square, with dimensions of 32 m × 32 m and an area of 1024 m2.
A preliminary stem map from the plot was used as guidance for the field measurements of tree attributes. The methods for producing the stem maps, based on terrestrial laser scanning (TLS) measurements, are described in more detail in [45,46]. The following variables were measured for all trees with a dbh larger than 5 cm within the field sample plots: tree species, dbhobs, and height. A Haglöf Mantax Blue calipers and a Haglöf Vertex IV Ultrasonic (Haglöf Sweden AB, Långsele, Sweden) clinometer were used for measuring dbhobs and height, respectively. The identity of the person doing the measurements was also recorded. The values for dbhobs were obtained in millimetre scale using cross measurements with calipers. The mensurationist determined the height of 1.3 m above the base of the tree with a standardized 1.3 m long measure and then measured dbh from two directions perpendicular to each other on two sides of the tree (i.e., cross measurement) without any predetermined directions. Before tree height measurements, the clinometer was calibrated to current weather conditions using a measuring tape to measure the distance between the transponder and the clinometer. The clinometer was always calibrated when the mensurationist moved to a new plot or if the weather conditions changed.
First, the transponder was fastened at the stem of the tree that was the subject of the measurement at the height of 1.3 m. Then, the mensurationist selected the position of the measurement with distance to the tree being approximately the same as the tree height for optimal view of the whole tree. The mensurationist had to also pay attention to the visibility of the tree top when selecting the measurement position in a dense forest. After finding a suitable position, the mensurationist aimed the device first at the transponder and then to the tree top. The tree height was given by the device as a result of these distance and angle measurements. The average dbhobs and height for all the trees on the sample plots was 19.1 cm (range between 5.0 cm and 73.1 cm) and 17.6 m (range between 1.4 m and 37.5 m), respectively.

2.3. Evaluation of the Variance in the Field Measurements

Four individual mensurationists each measured the same 319 trees in different plots using calipers and clinometers in order to characterize the precision of traditional field measurements of dbh and height. We found no statistically significant differences between independent measures of dbh or height. Overall, the standard deviation for dbh was 1.5%, whilst the standard deviation of measured height measures was 2.9%. It was possible to obtain greater precision in dbh than height measurements, while Norway spruce was measured with greater precision than Scots pine or birch. There were no clear differences in the precision of dbh or height measurements for different dbh- or height-based size classes. Based on the results presented herein, it can be stated that the traditional field-based methods tested in the study for tree dbh and height measurements provide precise and reliable information from forests. However, precision should be a stated objective, and must be explicitly considered when planning and implementing a field campaign. For example, in this study, we demonstrated that the use of dbh cross-measurements, instead of single dbh measurements, notably improved the precision of dbh measurements.
In addition, the low variation between repeated measurements from sample trees demonstrated that calipers and clinometers are not prone to outliers, which further supports the use of these traditional measuring tools as a useful benchmark for modern automatic or semi-automatic forest measurement applications and techniques. Calipers and clinometers remain an important source of forest measurement data and can be used to benchmark accuracy of the new forest measurement techniques, such as terrestrial laser scanning.

The study was funded by the Academy of Finland through the Centre of Excellence in Laser scanning research (project number 272195). The research leading to these results has also received funding from the European Community's Seventh Framework Programme ([FP7/2007-2013]) under grant agreement no. 606971. The authors would also like to thank Häme University of Applied Science for supporting our research activities at Evo study site. 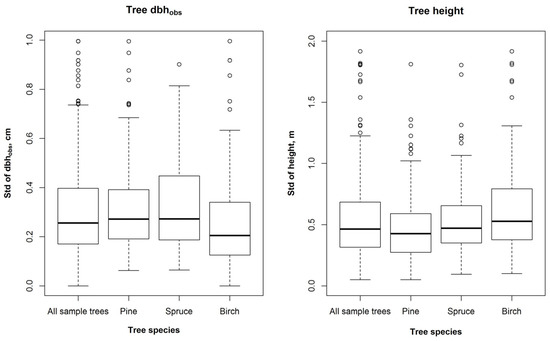 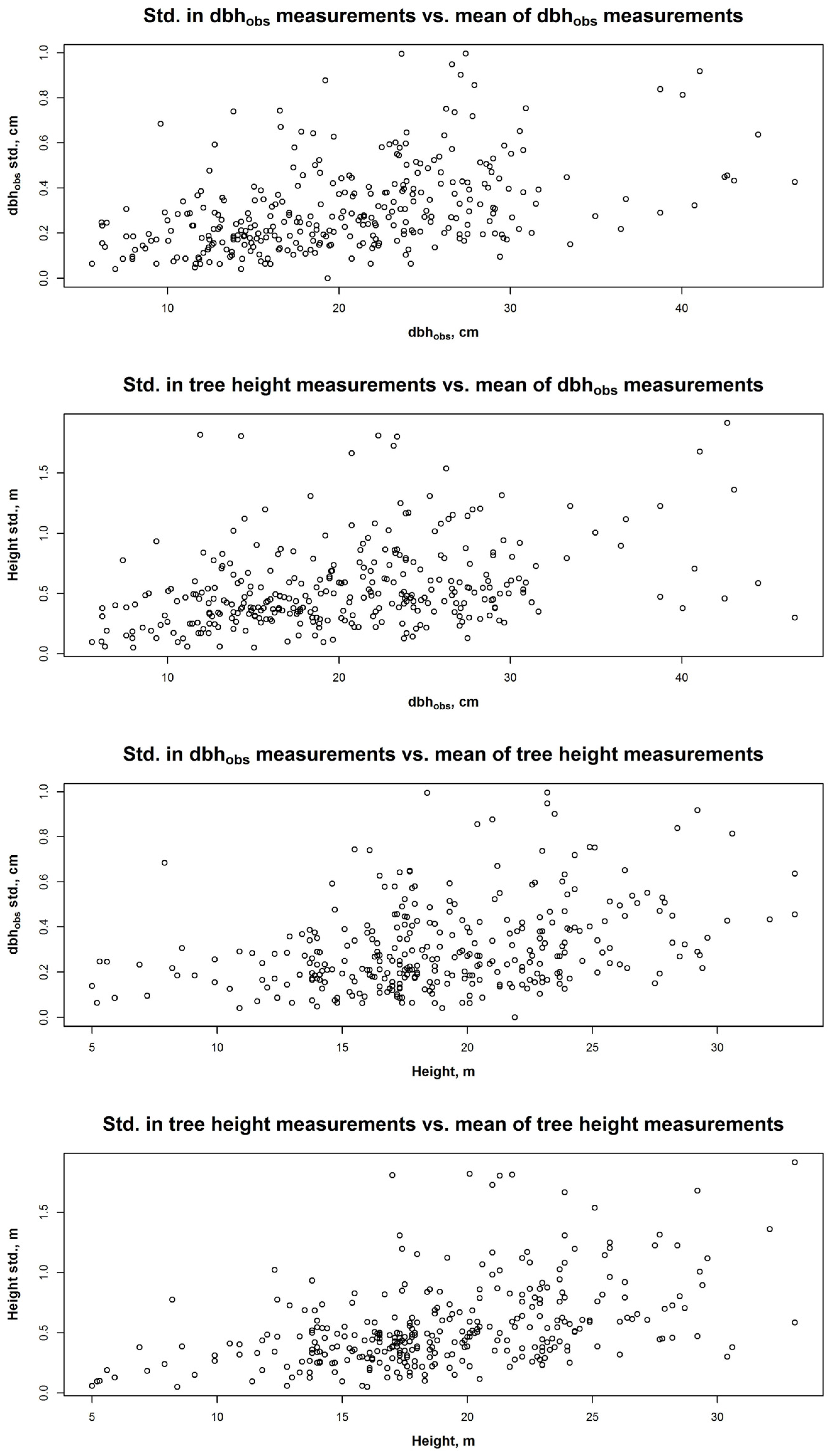 Table 2. The results of ANOVA analysis for dbhobs measurements for all sample trees as well as for different tree species with degrees of freedom (Df), sum of squares (Sum Sq), mean squared error (Mean Sq), F-value and p-value.

Table 3. The results of ANOVA analysis for tree height measurements for all sample trees as well as for different tree species with degrees of freedom (Df), sum of squares (Sum Sq), mean squared error (Mean Sq), F-value and p-value.

Table 5. The species specific means of the standard deviations (std) calculated from the four independent dbhobs (diameter-at-breast-height) and h (height) observations from each of the sample trees.

Table 6. The mean dbhobs (mean of cross measurements) and h (height) of the five tree size classes that are based on the dbh, as well as the class-wise means of standard deviations (stdobs) calculated from the four observations of dbhobs and h.

Table 7. The mean dbhobs (mean of cross measurements) and h (height) of five tree size classes that are based on tree height, as well as the class-wise means of standard deviations (stdobs) calculated from the four measurements of dbhobs and h.