Estimates of Wildfire Emissions in Boreal Forests of China

Wildfire emissions in the boreal forests yield an important contribution to the chemical budget of the troposphere. To assess the contribution of wildfire to the emissions of atmospheric trace species in the Great Xing’an Mountains (GXM), which is also the most severe fire-prone boreal forest region in China, we estimated various wildfire activities by combining explicit spatio-temporal remote sensing data with fire-induced emission models. We observed 9998 fire scars with 46,096 km2 in the GXM between the years 1986 and 2010. The years 1987 and 2003 contributed 33.2% and 22.9%, respectively, in burned area during the 25 years. Fire activity is the strongest in May. Most large fires occurred in the north region of the GXM between 50° N and 54° N latitude due to much drier weather and higher fire danger in the northern region than in the southern region of the study domain. Evergreen and deciduous needleleaf forest and deciduous broadleaf forest are the main sources of emissions, accounting for 84%, 81%, 84%, 87%, 89%, 86%, 85% and 74% of the total annual CO2, CH4, CO, PM10, PM2.5, SO2, BC and NOx emissions, respectively. Wildfire emissions from shrub, grassland and cropland only account for a small fraction of the total emissions level (approximately 4%–11%). Comparisons of our results with other published estimates of wildfire emissions show reasonable agreement. View Full-Text
Keywords: wildfire; emissions; satellite; China; burned area wildfire; emissions; satellite; China; burned area
►▼ Show Figures 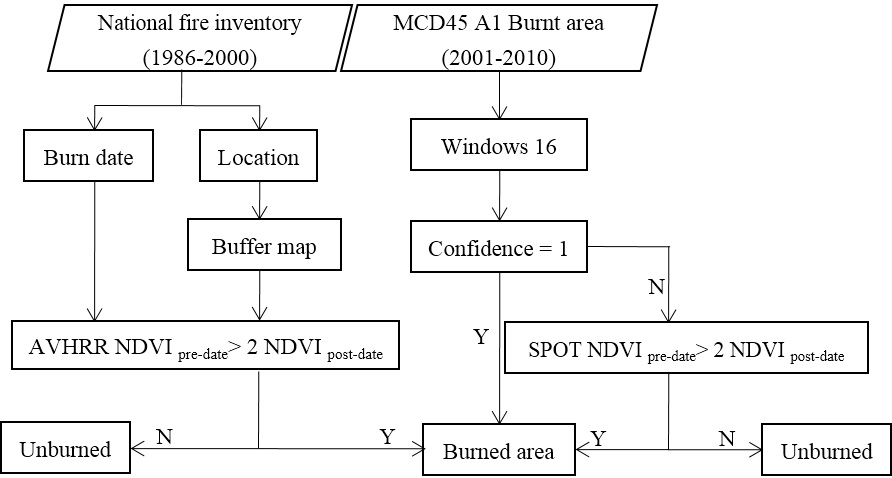