Chinese fir (Cunninghamia lanceolata (Lamb.) Hook) is one of the major commercial conifer species in China. The present study concentrated on the assessment of growth, wood property traits, and strobili number in a 12-year grafted clone test of 62 Chinese fir breeding parents, aiming to describe the variation and correlations between these traits and to identify parent clones with the highest potential for future breeding. The results indicate that all of the growth (height, diameter at breast height, stem volume, crown-width) and wood property (wood basic density and hygroscopicity) traits varied significantly (p < 0.01) among clones, with coefficients of variation ranging from 7.6% to 30.6%. Furthermore, these traits consistently had a moderate to high (0.39–0.87) repeatability estimate (broad-sense heritability). Remarkable clonal differences were also observed for the production of male and female strobili. Phenotypic correlations among growth traits were strong (p < 0.01) and positive. Significantly negative correlations (p < 0.01 or 0.05) were found between wood basic density and growth (except for height) and hygroscopicity. The production of male and female strobili appeared to be significantly (p < 0.01) positively correlated with each other. A notable number of faster-growing parent clones were identified (n = 30); 11 of these had higher density wood with an average realized gain of 10.5% in diameter, and a 5.4% gain in wood basic density. When selection was made for growth and strobili, 10 faster-growing parent clones with medium to high production of female strobili were identified.
Keywords: Cunninghamia lanceolata; clone test; repeatability; correlation; realized gain Cunninghamia lanceolata; clone test; repeatability; correlation; realized gain

Conifers dominate approximately 39% of world forests and play an important role in forestry-dependent economics and global ecosystems (e.g., carbon capture, the diversity of native habitat, and erosion control/water quality) [1,2]. They comprise 69 genera, representing approximately 614 known species [3,4,5]. A subset of conifers has been used as breeding subjects with a goal to enhance useful traits, such as rapid growth, high wood quality, and biotic and/or abiotic resistance. Representatives of these breeding subjects include loblolly pine (Pinus taeda L.) [6], radiata pine (Pinus radiata D. Don) [7], Norway spruce (Picea abies (L.) Karst.) [8], and Douglas fir (Pseudotsuga menziesii (Mirb.) Franco) [9], etc. Chinese fir (Cunninghamia lanceolata (Lamb.) Hook), an evergreen coniferous tree that occupies approximately 25% of plantations in southern China, has received a considerable breeding effort over the past 50 years, largely due to its great afforestation values and ecological contributions [10,11].
Similar to other conifer breeding programs around the world, the improvement of Chinese fir mainly emphasizes the enhancement of growth and adaptability with the following activities: provenance testing, plus-tree selection, establishment of breeding garden/gene bank, family/progeny (half-sib and full-sib) and clonal testing, parent tree (plus-tree clone) reselection, clonal seed orchard establishment, and so forth [12]. Wood quality traits were recently targeted as a breeding objective due to increasing demands for high-quality timber in the last 10 years. To advance the multi-trait breeding process, it is essential to profile the breeding parents/materials using either clonal testing or progeny trials, of which, clonal testing has proven to be a straightforward and effective strategy [13,14,15,16]. In the present study, to identify the variation and correlation in growth, wood property traits, and strobili number, 62 Chinese fir breeding parents were subjected to a 12-year grafted clone test with an eventual goal to select the best potential parent clones for future breeding programs.

Differences in growth and wood property traits (p < 0.01) were observed for the Chinese fir parent clones (n = 62) at age 6 and/or 12 (Table 1). Six-year-old clones displayed a substantial variation in stem volume (V) with more than 2 times the coefficient of variation (CV) of the other growth traits (height, diameter at breast height (DBH) and crown-width (CW)); while the estimated CVs for wood properties (wood basic density (WBD) and hygroscopicity (Hy)) appeared to be higher than that of DBH at age 12. Further estimation revealed that all of the examined traits had moderate to high (0.39–0.87) repeatability (broad-sense heritability), indicating the possibility of selection of the varieties in clones. 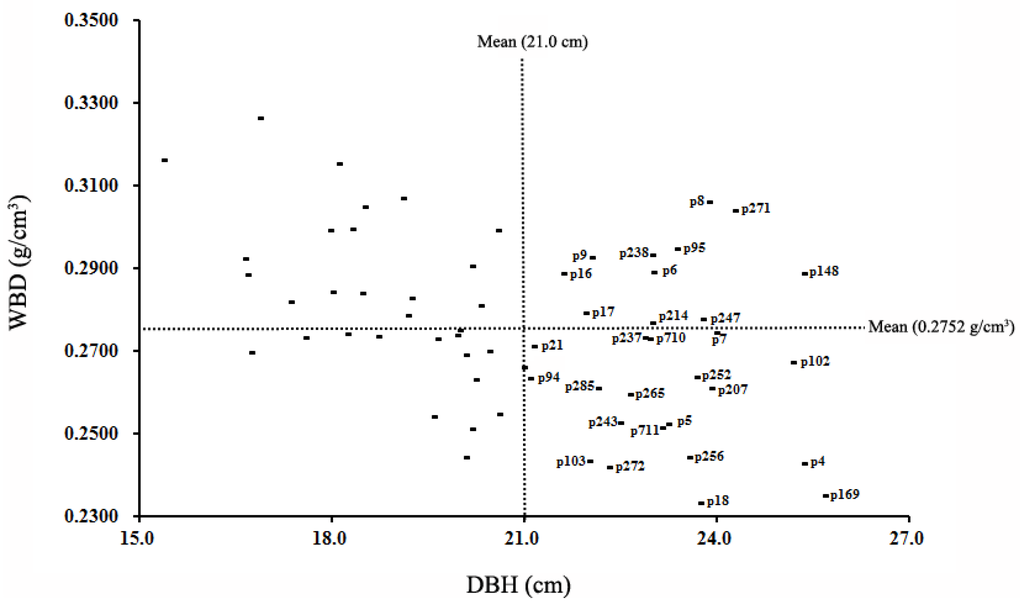 Table 4. Responses in DBH, WBD and Hy when different selection criteria were used for the 62 Chinese fir breeding parents at age 12. DBH, diameter at breast height; WBD, wood basic density; Hy, wood hygroscopicity; G, realized gain. * Selection was carried out in the 62 Chinese fir breeding parents using the overall mean of DBH and/or WBD as a threshold; production of female strobili was at medium to high levels.

Regardless of the stringency of selection of plus-trees (parent tree) for advanced breeding programs, it is still necessary to employ field trials to evaluate performance superiority. Based on a 12-year grafted clone trial, variations in growth, wood properties, and flowering traits were characterized in 62 Chinese fir parent clones, and significant correlations were identified between specific traits (Table 3). Of note, this study led to the identification of a set of faster-growing parent clones, some with high density wood, and some with medium to high production of female strobili.
Grafting is the most practical way to produce elite tree clones for conservation and breeding. It is also employed as a straightforward method to obtain a recurring tree phenotype, thereby providing evidence for a genetic effect in traits [19]. Unfortunately, rootstock and graft compatibility effects on growth can be detrimental. It is worth mentioning that the grafting success in this experiment was high (>90%), and graft incompatibility was not observed in Chinese fir. Furthermore, most of the ramets remained vigorous throughout the entire study.
Genetic parameters vary with different populations, environments, and ages [20]. Bian et al. [12] reported that the Chinese fir repeatability of H, DBH and WBD traits in clonal tests ranged from 0.63–0.79, 0.49–0.78, and 0.51–0.75, respectively. Our report showed a high estimated repeatability for these traits (Table 1). Moderate to high repeatability indicates that selection was effective and influenced by the environment to a lesser extent [21]. Compared with the repeatability of the growth traits at age 6 (0.53–0.70), the repeatability estimate for DBH (0.87) was higher at age 12. Additionally, 12-year DBH appeared to be significantly (p < 0.01, df = 184) correlated with growth traits at the 6-year stage. These findings suggest that 12-year DBH could be used as a reliable criterion for the selection of faster-growing clones.
Basic density (WBD) is the most important wood property that affects nearly all wood end-product quality [22,23]. Rapid growth with higher WBD seems to be a more attractive feature for both breeders and stakeholders, as it increases the wood yield and the value for all applications [24]. Unfortunately, in most cases, correlations between WBD and growth traits appear to be negative [12], implying that increasing the WBD may, to a certain extent, result in losses in growth traits. In this study, we also found negative correlations between WBD and growth traits, and in addition, strong negative relationships between WBD, DBH and V were in agreement with the investigations reported by Li et al. [25] and Hu et al. [26,27]. Thus, care should be taken regarding selection for growth and WBD among the present parent clones. Using the overall means of 12-year DBH and WBD as a threshold, 11 faster-growing parent clones with a higher density wood were identified. They gained 10.5% in DBH and 5.4% in WBD, suggesting that these clones could be prioritized for further breeding projects.
Hygroscopicity (Hy) was another wood trait tested in this experiment because it affected multiple agent treatments on end-products [28]. Although this trait was not included in the selection criteria, it was measured throughout the selection process. When DBH was selected as a single trait or combined with female strobili, 3.1% and 6.6% gains, respectively, were observed in Hy, but reductions (−6.4%) were seen when DBH and WBD were selected together. These responses may be due to the positive correlation between Hy and growth, and the negative relationship between Hy and WBD (Table 3).
In this report, most of the studied parent clones produced a limited number of male and female strobili. One possible reason is that these parent clones originated from plus-trees selected for phenotypic vigor and adaptability, not for flower abundance. Interestingly, Nikkanen et al. [29] showed a significant positive relationship between strobili number and growth traits among 67 Norway spruce (P. abies) parent clones. Similarly, Sivacioglu et al. [30] reported that strobili number had a significant positive association with growth traits among 30 Scots pine (P. sylvestris) clones. In this study, a positive correlation between strobili number and growth traits in 62 Chinese fir parent clones was also observed, but at a nonsignificant level (except for female strobili number with 6-year DBH). However, larger testing populations are required to address the relationship between flowering and other traits. Since one of the main objectives of selection in trees is to establish seed orchards for the production of genetically improved seeds, it is of interest to select for faster-growing parent clones together with flowering. It is promising that a set of parent clones yielded medium to high numbers of female strobili, 10 of which (p4, p5, p6, p7, p18, p237, p238, p243, p272, and p285) were part of the faster-growing set. These parent clones in particular provide a significant advancement in breeding of Chinese fir, and should be prioritized for use in the production of a seed orchard.

This research was supported by the Special Fund for Forest Scientific Research in the Public Welfare (No. 201404127), the Special Plan for the Cultivation of High-level Talents of Guangdong (No. 2014TQ01N140) and the Specific Programs in Forestry Science and Technology Innovation of Guangdong (No. 2012KJCX010-01, 2014KJCX012-01). We gratefully thank the staff of Longshan Forest Farm (Lechang, Guangdong, China), in particular Mr. Jun Lin, Engxu Lai and Wenjiang Deng, for their assistance in the establishment of the breeding garden and subsequent investigation of the trees.

Huiquan Zheng is the lead author. He conducted most of the field trial work and statistical analyses and wrote the manuscript. Dehuo Hu designed the experiments, and directed the estimation of the breeding garden. Runhui Wang, Ruping Wei and Shu Yan participated in the investigation of the trees.