Urbanization has led to the continuous expansion of built-up areas and the ever-growing urban population, threatening the quantity and quality of urban green space (UGS). Exploring the spatiotemporal variations of UGS is substantially conducive to the formulation of land-use policies to protect the ecosystems. As one of the largest megacities all around the world, Shanghai has experienced rapid urbanization in the past three decades. Insights into how UGS changes in response to urbanization and greening policies are essential for guiding sustainable urban development. This paper employed integrated approaches to characterize the changing patterns and intensities of green space in Shanghai, China from 1990 to 2015. The spatiotemporal dynamics of the UGS pattern were derived through four main methods: green space ratio, dynamic change degree (DCD), transition matrix and landscape metrics. The results showed that Shanghai’s green space decreased from 84.8% in 1990 to 61.9% in 2015 while the built-up areas increased from 15.0% to 36.5%. Among the green space sub-types, farmland was largely encroached and fragmented by urban sprawl, especially in the Outer Ring Expressway and Suburban Ring Expressway belts of the city. About 1522 km2 of the green space has transferred into built-up areas, followed by farmland, waterbody, forest, and grassland in descending order. The 2000–2010 period witnessed the strong urban expansion and dramatic changes in UGS, but then the change around 2015 turned down and stable. The landscape pattern metrics showed that the entire green space in Shanghai was growingly fragmented and isolated during the past 25 years. Combined with the green space-related planning and policies issued in 1990–2015, the results revealed that both rapid urbanization and greening policies accounted for the spatiotemporal dynamics of UGS. Based on the results, some implicants to new urban planning and policies of Shanghai were highlighted. View Full-Text
Keywords: driving factors; green space; land use policies; spatiotemporal dynamics; Shanghai; urbanization driving factors; green space; land use policies; spatiotemporal dynamics; Shanghai; urbanization
►▼ Show Figures 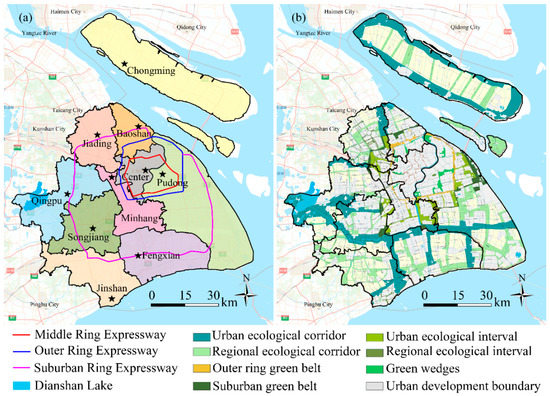