Environmental contamination caused by uranium mining is becoming a worldwide issue due to its negative impact on the environment. The aim of this study is to evaluate the contamination levels of riparian forest stands and their interaction with pollutants on the example of two localities with long and short-term uranium mining closure. Notably high Cu content, which exceeded the lower range of the toxicity limit in 50–75% of the cases, was detected in the leaves. Increased U content also represents a potential risk. As both of the elements have a negative effect particularly on the root system, it can be assumed that the soil-stabilizing and water erosion-reducing functions of the stands may be reduced. Extremely high U content (51.8 mg/kg DA) in the leaves of Aesculus hippocastanum L. indicates its potential for phytoremediation. Significantly higher U content determined at the locality with the long-term closure of mining was probably caused by the instauration of the shallow hydrogeological circulation after mine inundation. Strong correlation between U and Pb suggests identical trend of their uptake and accumulation by plants. A significant dependence of the level of contamination on the distance from its source was not demonstrated. Therefore, the management of mining areas should focus on the protection of riparian forest, which can through its stabilizing and erosion-reducing functions and through suitable species composition effectively prevent spreading of contamination. View Full-Text
Keywords: bioaccumulation; riparian forest; uranium mining; Aesculus hippocastanum; phytoremediation; forest functions bioaccumulation; riparian forest; uranium mining; Aesculus hippocastanum; phytoremediation; forest functions
►▼ Show Figures 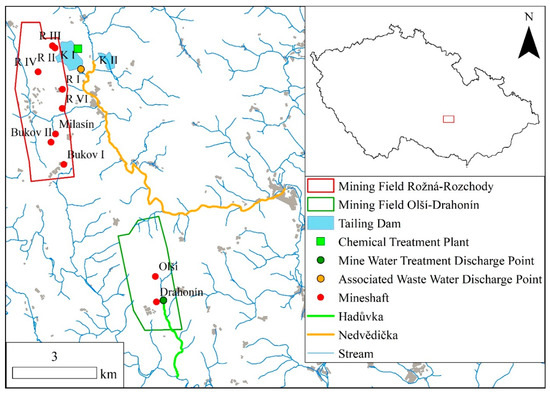