The plant hormone gibberellin (GA) is known to regulate elongating growth, seed germination, and the initiation of flower bud formation, and it has been postulated that GAs originally had functions in reproductive processes. Studies on the mechanism of induction of flowering by GA have been performed in Arabidopsis and other model plants. In coniferous trees, reproductive organ induction by GAs is known to occur, but there are few reports on the molecular mechanism in this system. To clarify the gene expression dynamics of the GA induction of the male strobilus in Cryptomeria japonica, we performed comprehensive gene expression analysis using a microarray. A GA-treated group and a nontreated group were allowed to set, and individual trees were sampled over a 6-week time course. A total of 881 genes exhibiting changed expression was identified. In the GA-treated group, genes related to ‘stress response’ and to ‘cell wall’ were initially enriched, and genes related to ‘transcription’ and ‘transcription factor activity’ were enriched at later stages. This analysis also clarified the dynamics of the expression of genes related to GA signaling transduction following GA treatment, permitting us to compare and contrast with the expression dynamics of genes implicated in signal transduction responses to other plant hormones. These results suggested that various plant hormones have complex influences on the male strobilus induction. Additionally, principal component analysis (PCA) using expression patterns of the genes that exhibited sequence similarity with flower bud or floral organ formation-related genes of Arabidopsis was performed. PCA suggested that gene expression leading to male strobilus formation in C. japonica became conspicuous within one week of GA treatment. Together, these findings help to clarify the evolution of the mechanism of induction of reproductive organs by GA. View Full-Text
Keywords: gibberellin; male strobilus induction; transcriptome; conifer; Cryptomeria japonica gibberellin; male strobilus induction; transcriptome; conifer; Cryptomeria japonica
►▼ Show Figures 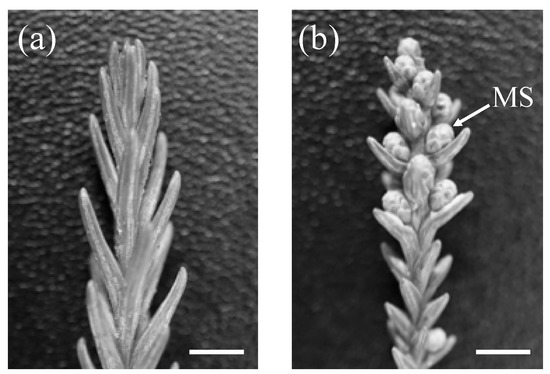