Biotic stresses on forest trees are caused by various pest insects and plant pathogens. Attack by these parasites is known to induce the emissions of various biogenic volatile organic compounds (BVOCs), and the profile of these emissions often differs between infested and healthy plants. This difference in emission profile can be used for the non-destructive early-stage diagnosis of the stressor organism. We studied how phloem feeding by a large pine aphid (Cinara pinea Mordvilko) on the branch bark of Scots pine (Pinus sylvestris L.) affects BVOC emissions compared to those of healthy plants in two experiments. We found that in aphid-infested plants, methyl salicylate (MeSA) emissions significantly increased, and the emission rates were dependent on aphid density on the studied branch. Aphid infestation did not significantly affect total monoterpene emission, while the emissions of total sesquiterpenes were substantially higher in aphid-infested saplings than in uninfested plants. Sesquiterpene (E, E)-α-farnesene was emitted at increased rates in both experiments, and the aphid alarm pheromone sesquiterpene (E)-β-farnesene, only in the experiment with higher aphid pressure. We conclude that the rapid increase in MeSA emissions is the most reliable indicator of aphid infestation in pine trees together with (E, E)-α-farnesene.
Keywords: conifer aphids; plant volatiles; BVOC emissions; terpenes; methylsalicylate; forest ecosystem; pest management; air quality conifer aphids; plant volatiles; BVOC emissions; terpenes; methylsalicylate; forest ecosystem; pest management; air quality

The non-destructive early-stage diagnosis of plant pathogen and insect pest infestations is important for successful plant protection in agriculture and horticulture [1,2]. Plant volatiles form the majority of the biogenic volatile organic compounds (BVOCs) emitted to the atmosphere, and their composition and ratio in the emission bouquet contain valuable information about the physiological and pathological status of the emitting plant [1,2,3,4]. Forests are one of the most significant sources of BVOCs [5,6,7,8], and the emissions are sensitive to abiotic and biotic stresses [9,10,11,12,13]. BVOCs emitted to the atmosphere from the forests have also an important role in secondary aerosol formation and in the control of atmospheric processes such as cloud formation [10,14].
In addition to traditional gas-chromatography mass-spectrometry (GC-MS) analysis and fast on-line proton-transfer-reaction mass spectrometry (PTR-MS) analysis with leaf and shoot enclosures [7,15], various portable [2] and aerial monitoring systems have been recently developed for the detection of BVOC emissions indicating plant stress [16,17]. For some BVOCs, the remote sensing of emissions from larger forested areas by satellite applications is under development [18]. A prerequisite for the use of BVOCs for diagnostic purposes is the proper knowledge of the volatile profiles induced by the attack of a specific insect species or plant pathogenic organism [1]. Furthermore, the effects of the progress of the attack on the BVOC profile needs to be analysed, because the emitted profile has distinctive variation based on the duration and age of the attack [19].
Aphids are a crucial part of functional forest ecosystems e.g., by providing aphid honeydew as an important carbohydrate source for many pollinators and for insects (e.g., ants) that are the natural enemies of defoliating insects [20,21,22,23,24,25]. Being phloem-sap feeders, aphids are extremely sensitive to variation in the nutrient content of the phloem sap; thus, aphid population growth easily responds to the various stresses affecting the nutritional status of the host plant [26,27,28,29,30,31]. Mass outbreaks of aphids lead to various responses in host trees including reduced photosynthesis [32], needle and leaf chlorosis and defoliation [33,34], and long-term aphid pressure can result in reduced timber yield [35]. However, in actively growing conifer forests, aphid–plant mutualism may improve tree growth when the ant communities maintained by aphid honeydew remove other, more serious insect defoliators from the foliage [36].
The induction of plant volatile emissions by aphids have been studied on crop plants, e.g., for diagnostic purposes [37], for the development of biological control for aphids [38,39,40] and for the control of aphid-transmitted plant viruses [41,42]. On deciduous trees, studies on aphid infection’s effects on BVOC emissions have indicated that methyl salicylate (MeSA) [43,44] and sesquiterpenes [43,45] are among the most inducible compounds during aphid infestation. The knowledge of aphid-induced volatile compounds for conifer trees is less, but some evidence of increased sesquiterpene and MeSA emissions from infected trees is available [12,46,47,48].
We wanted to know how the population growth and colonization of the large pine aphid Cinara pinea Mordvilko (Hemiptera: Aphididae), a common phloem-feeding stressor, on the branch bark of Scots pine (Pinus sylvestris) affect the BVOC emission profiles of current and previous year shoots. This species is a relatively large spider-like aphid species, commonly feeding on the bark of the current and previous year growth of Pinus spp. twigs, forming small colonies on elongating current year shoots and nymphs feeding close to the base of needles [49]. It is widely distributed in Europe and Asia, introduced to North America [49] and known to be relatively tolerant to the environmental stresses of the host tree [29,50]. C. pinea is a significant producer of honeydew (forest honey), actively attended by ants, and thus has an important role in the function of boreal conifer forest ecosystems [22,51,52]. Our aim was to find out how the bark-phloem sucking aphid C. pinea affects the BVOC bouquet of Scots pine. We performed two experiments in subsequent growing seasons. The aim of Experiment 1 was to monitor BVOC emission rates along with the change in the aphid population over time. The aim of Experiment 2 was to create higher aphid pressure than in Experiment 1 and confirm the results of Experiment 1. Our aim was also to provide information that could be used to develop BVOC-based tools as early-stage diagnostic indicators of aphid infestation in pine forest and forest tree nurseries.

Experiment 1: Twelve seven-year old saplings were randomly selected from our outdoor stock of pine saplings with a seed origin of central Finland (produced by Taimityllilä Forest Nursery Oy, Mäntyharju, Finland) in 2015. Each of the saplings was repotted from 5 L plastic pots into 7.5 L plastic pots in a 1:1 mixture of garden soil (pH 6.2; Kekkilä Oy, Vantaa, Finland) and natural peat (pH 4.2; Kekkilä Oy, Vantaa, Finland). Prior to the experiment, the selected Scots pine saplings were screened for the proportion of Δ-3-carene in the BVOC emission blend (see Section 2.3 for the methods) to secure an even distribution of the common low and high Δ-3-carene chemotypes [53,54] to both treatments and to reduce chemotype-based variation in the BVOC data. Six saplings were grouped into control and aphid exposure treatments based on the proportion of Δ-3-carene in the BVOC emissions. This initiated collection of BVOCs from a designated branch tip (one randomly chosen branch tip from a randomly chosen branch in the second whorl from the top) of the saplings (see Section 2.3).
The saplings were fertilized with 0.5 L of 0.1% fertilizer (Turve-superex; N/P/K, 12:5:27; Kekkilä Oy, Vantaa, Finland) once a week for 8 weeks. They were nurtured under outdoor conditions with natural rainfall and watered when required.
Experiment 2: The same tree material (different saplings, now 8 years old) was used in another experiment in 2016. Four saplings were grouped to control and eight to aphid infestation treatment. A higher number of saplings was allocated to the infestation treatment in order to reduce the high variation in the BVOC emissions of the aphid-infested samples observed in Experiment 1. The maintenance of the seedlings was the same as in Experiment 1.

Experiment 1: Nymphs and mature fundatrix females (all hatched and developed from over-wintered eggs in early May) of the large pine aphid C. pinea were collected from naturally infested Scots pine trees on 24 May 2015 and reared on young Scots pine branches in insect cages until their parthenogenetic nymphs were used in the experiment.
Six Scots pine saplings were infested by nine aphids per sapling. Viviparous aphid nymphs represented late instar (3rd and 4th) and were transferred on 25 June 2015 on one experimental branch tip (with 2 needle generations and developing needles) per sapling. The branch tip with aphids was enclosed in mesh sleeves attached to the basal part of the branch tip. This was to ensure the aphids fed only on the designated branch tip. Similar branch tips of the control saplings were also enclosed in mesh sleeves to ensure that the studied branch tips of both the controls and infested saplings were exposed to the same condition of reduced sunlight. Aphids were counted seven times during the 40 day monitoring period by opening the mesh sleeves carefully, keeping escaping aphids inside the sleeves by gently sweeping with a small soft brush.
Experiment 2: In 2016, one branch tip per sapling was infested on 22 May using 15 late instar C. pinea nymphs. The nymphs were reared from over-wintering eggs on pine seedlings in growth chambers at 20 °C/12 °C (day/night), with a 18/6 (day/night) light rhythm simulating typical mid-May conditions in Finland. Aphids were also added to a few branch tips during two first weeks of the 5-week infestation period to replace dead aphids.

Experiment 1: The effects of aphid infestation on BVOC emissions were studied by t-tests (normally distributed data, studied by Shapiro–Wilk test) or the Mann–Whitney tests (data not normally distributed even after data transformations) on each sampling time separately. T-tests or the Mann–Whitney tests were also used to test the differences between treatments in systemic emission rates. The Spearman correlation test was used for aphid-infested saplings to study the relationship between the daily averages of aphid numbers and BVOCs from infested branch tips. Only those BVOCs significantly affected by aphid infestation were studied by correlation tests.
Experiment 2: T-tests or the Mann–Whitney tests were used to test differences in BVOC emission rates between uninfested and aphid-infested plants. The Spearman correlation test was run between aphid numbers and BVOC emission rates (those significantly affected by aphid infestation) from the branch tips of the aphid-infested samplings.
In the results, untransformed values are shown. IBM SPSS Statistics for Windows (version 25.0, IBM Corp., Armonk, NY, USA) was used for all statistical tests.

Experiment 1: In 2015, the number of aphids occurring on aphid-infested plants increased over time since the beginning of the experimental trial, reaching an average of 77 ± 27 aphids per sapling 33 days after artificial infestation (Figure 1). In particular, the maximum number of aphids observed on an individual sapling was 188. Some winged aphids (alate) were observed to be produced 17 days after aphid infestation. The accumulation of honeydew on bark and needle surfaces was observed on Day 26 after aphid infestation.
In Experiment 2, aphids were counted on 27 June, 5 weeks from the beginning of the experiment, from the branch tips used for BVOC collection. The average number of living aphids was 138 ± 20 on the branch tips of the aphid-infested saplings and 0 on those of controls. Honeydew was abundant in the aphid-infested branch tips.

The induction of MeSA emission together with sesquiterpene farnesenes appeared to be indicative of aphid infestation on Scots pine. Our results suggest that a specific BVOC emission profile having these induced compounds has the potential to be used for the diagnosis of severe aphid infestations in conifers, and the profile differs from that in infestation by chewing needle and bark herbivores, characterized by a substantial increase in MTs and SQTs, although MeSA emission is also indicative of phytopathogen and spider mite attack. Our results are not only interesting from an indicator point of view, but they have importance for the understanding of the function of conifer forest ecosystems and can be applied in the development of sustainable biocontrol, forest nursery practices and forest management strategies.

Conceptualization and methodology, M.K., J.J. and J.K.H.; data collection and analysis, M.K. and A.B.B.; original draft preparation M.K. and J.K.H; writing—review and editing M.K., J.J., A.B.B.: and J.K.H.; funding acquisition, J.J. and J.K.H. All authors have read and agreed to the published version of the manuscript.

This research was funded by the UEF International Top-Level Research Areas BORFOR and Aerosols, Climate Change and Human Health and the Academy of Finland (grant no. 252908 for J.J. and grant no. 278424 for J.K.H). 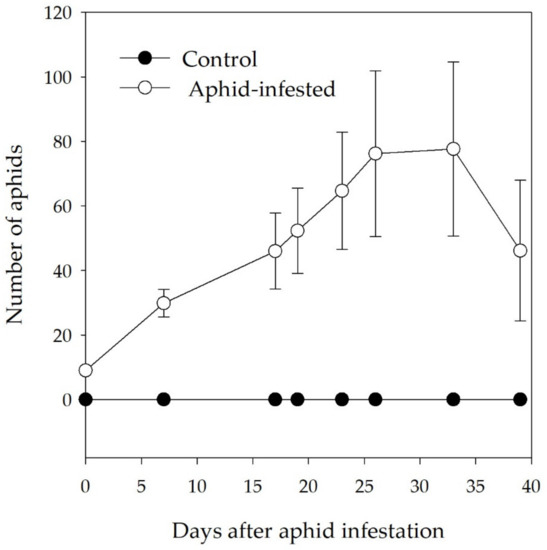 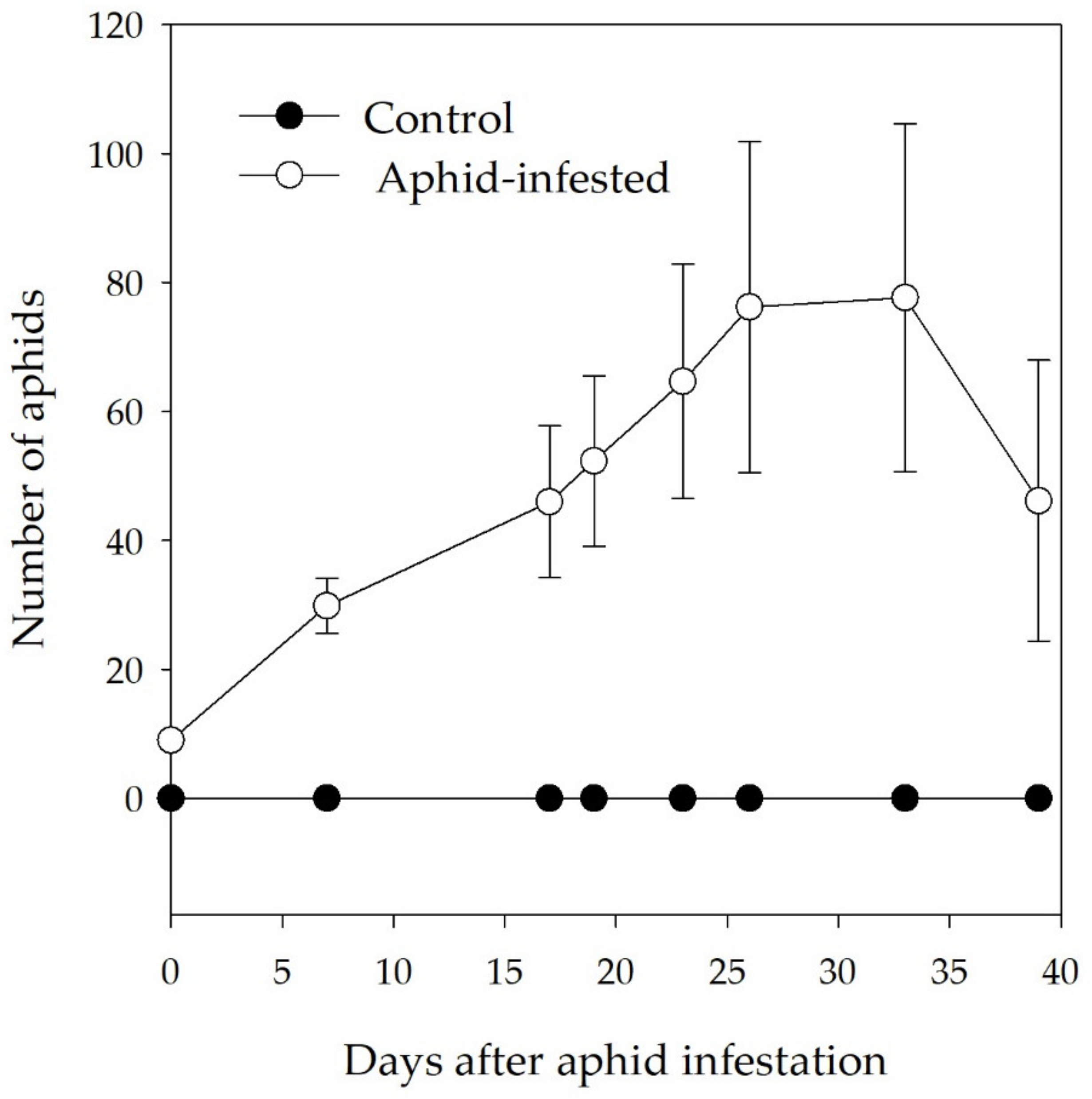 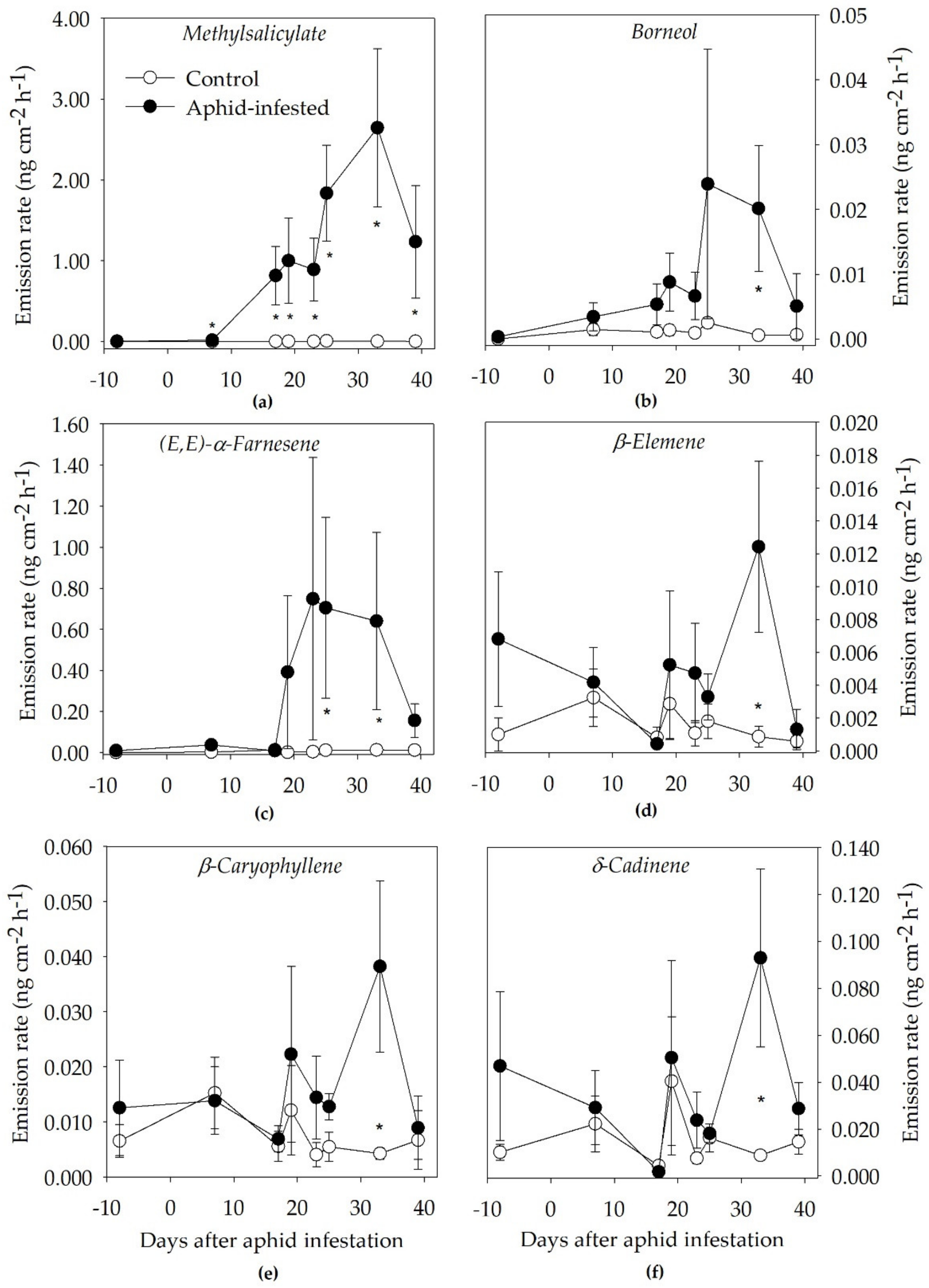