Xylem Plasticity in Pinus pinaster and Quercus ilex Growing at Sites with Different Water Availability in the Mediterranean Region: Relations between Intra-Annual Density Fluctuations and Environmental Conditions
Next Article in Special Issue

State-of-the-art forest management requires an adequate opening-up in terms of forest roads. In addition to the increased efficiency of harvesting operations, a higher road density may trigger other positive and negative side-effects. Austria has a long tradition of forestry, and also of monitoring the economic performance of forest enterprises by means of forest accountancy data networks. Using these almost unique preconditions, this research paper approaches the topic of forest roads from a managerial accounting perspective. Based on a specially designed report, the results for the fiscal years 2008–2017 were investigated. On average, Austrian forest enterprises larger than 500 ha report a road density of 50.5 m/ha. The yearly net cost of forest roads, including depreciation and reduction of revenue, is 32.4 €/ha. The pure maintenance cost amounts to 27.9 €/ha on average. The annual investment in forest roads accounts for 9.4 €/ha. Whereas the enterprises’ average annual cost of maintenance is 0.63 €/m, the actual maintenance cost of forest roads is 5.6 €/m. To cover the ongoing costs of maintenance, 12.1% of the allowable annual cut is needed. Grouping the analyzed enterprises according to different attributes, namely size of forest land, production conditions, coherence of estate, average slope, and share of forest land requiring cable yarding, showed some statistically significant differences in the maintenance costs of forest roads. In almost all of the tested groupings, significant differences of maintenance costs (expressed as €/ha, €/m3 felling volume, or €/m) were found. However, an initially expected significant correlation between road density and harvesting cost could not be established. The challenges brought about by the trend towards a bioeconomy on the one hand and climate change on the other most likely further enhance the significance of the opening-up of forests and the efficiency of road maintenance. View Full-Text
Keywords: forest roads; harvesting cost; maintenance cost; contribution margin; forest accountancy data network forest roads; harvesting cost; maintenance cost; contribution margin; forest accountancy data network
►▼ Show Figures 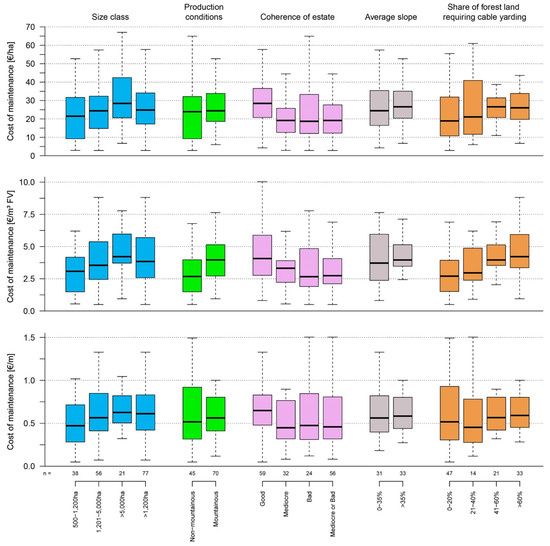