Research Highlights: The invasive species Pinus contorta, has become a new component of the vegetation in the Patagonian Steppe, invading the complex matrix of bare ground, tussock grasses and cushion plants. At a microsite scale, the type of native vegetation is one of the multiple factors determining the establishment of P. contorta and in some cases, increasing its survival, and as a result, the invasion of the species. Background and Objectives: The presence of trees, particularly pines, where they are naturally absent, represents a clear threat to Patagonian steppe ecosystems. Thus, understanding the interaction between pines and native plant species may be the key to understanding the invasion and applying management actions. Pinus contorta is considered one of the most aggressive among the pines species, with recognized impacts on regions in the southern hemisphere and Europe, and it is one of the main invaders in the Patagonian steppe. Our aim in this study is to determine the influence of surrounding vegetation on P. contorta spatial distribution, its establishment and future development in the Chilean Patagonia. Materials and Methods: We used point pattern analysis to determine the existence of spatial associations between P. contorta and the resident vegetation of the Patagonian steppe. Further, a seeding experiment was carried out to assess the influence of the surrounding vegetation during P. contorta establishment and first growing season. Results: We found that young P. contorta individuals are positively associated with the native cushion plant B. magellanica and also to tussock grasses. Seeding experiments showed that P. contorta is influenced by resident plant species during establishment and is able to establish on any ground cover type in the Patagonian steppe, but some resident plant species increase P. contorta survival chances. Conclusions: Pinus contorta is interacting with native vegetation and becoming an active component of the Patagonian steppe mosaic. Although pines can establish in any type of vegetation in the Patagonian steppe mosaics, native cushion and tussock grasses may be facilitating the process and promoting pine survival, allowing it to survive and thrive in this stressful environment. View Full-Text
Keywords: Pinus contorta; invasion; facilitation; Patagonia; steppe Pinus contorta; invasion; facilitation; Patagonia; steppe
►▼ Show Figures 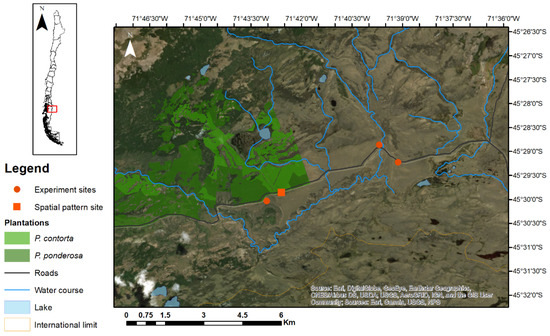