In the 1980s, the Western Sudety Mountains were affected by a forest dieback process, resulting in large-scale deforestation covering an area of about 15,000 ha. A similar phenomenon is presently being observed in the Western Beskidy and Eastern Sudety Mountains, where the course of the process and the final effects are similar. The presented study analyzed the relationships between forest dieback processes today and in the past. Among others, the impact of the following factors was examined: exposure, slope, altitude, and topographic index, which was generated based on the airborne LIDAR (also airborne laser scanning abbreviated as ALS) data. The identification of forest dieback areas in the past was carried out based on the archived Landsat satellite imagery, as well as data obtained from the Polish State Forests. The identification of forest dieback areas at present was carried out based on the ALS data (single-tree detection approach) and color infrared aerial images. In the study, inter-dependencies between forest dieback today and in the past were compared. The performed analyses show significant differences between forests’ dieback specifics in all three areas. The process first occurred at 800–900 m a.s.l., and afterwards at over 900 m. Mortality was especially intensive on the western and southwestern slopes. Below 700 m a.s.l., forests survived quite well. In the 1980s, significantly higher concentrations of hazardous chemical compounds were noted, which resulted in respectively greater deforestations on aspects open to the operation of prevailing winds (mainly west). Nowadays, a proportionately higher number of trees die on the southern aspects, which is particularly visible in the Western Sudety Mountains. View Full-Text
Keywords: deforestation; Norway spruce; topography; GIS; spruce dieback; comparison; remote sensing deforestation; Norway spruce; topography; GIS; spruce dieback; comparison; remote sensing
►▼ Show Figures 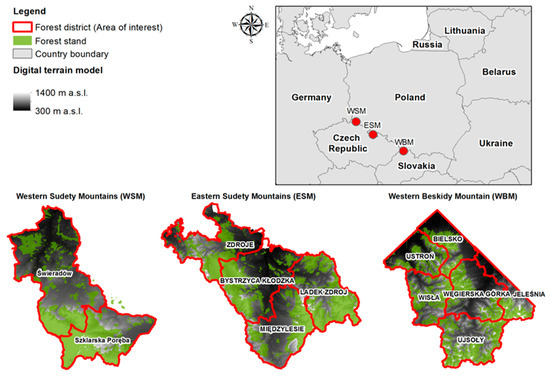