Photosynthetic Performance in Pinus canariensis at Semiarid Treeline: Phenotype Variability to Cope with Stressful Environment
Next Article in Special Issue

In the last decades, eucalypt plantations are expanding across the Brazilian savanna, one of the most frequently burned ecosystems in the world. Wildfires are one of the main threats to forest plantations, causing economic and environmental loss. Modeling wildfire occurrence provides a better understanding of the processes that drive fire activity. Furthermore, the use of spatially explicit models may promote more effective management strategies and support fire prevention policies. In this work, we assessed wildfire occurrence combining Random Forest (RF) algorithms and cluster analysis to predict and detect changes in the spatial pattern of ignition probability over time. The model was trained using several explanatory drivers related to fire ignition: accessibility, proximity to agricultural lands or human activities, among others. Specifically, we introduced the progression of eucalypt plantations on a two-year basis to capture the influence of land cover changes over fire likelihood consistently. Fire occurrences in the period 2010–2016 were retrieved from the Brazilian Institute of Space Research (INPE) database. In terms of the AUC (area under the Receiver Operating Characteristic curve), the model denoted fairly good predictive accuracy (AUC ≈ 0.72). Results suggested that fire occurrence was mainly linked to proximity agricultural and to urban interfaces. Eucalypt plantation contributed to increased wildfire likelihood and denoted fairly high importance as an explanatory variable (17% increase of Mean Square Error [MSE]). Nevertheless, agriculture and urban interfaces proved to be the main drivers, contributing to decreasing the RF’s MSE in 42% and 38%, respectively. Furthermore, eucalypt plantations expansion is progressing over clusters of high wildfire likelihood, thus increasing the exposure to wildfire events for young eucalypt plantations and nearby areas. Protective measures should be focus on in the mapped Hot Spot zones in order to mitigate the exposure to fire events and to contribute for an efficient initial suppression rather than costly firefighting. View Full-Text
Keywords: modeling; wildfire occurrence; eucalypt plantation; machine learning; spatial pattern; Brazilian savanna modeling; wildfire occurrence; eucalypt plantation; machine learning; spatial pattern; Brazilian savanna
►▼ Show Figures 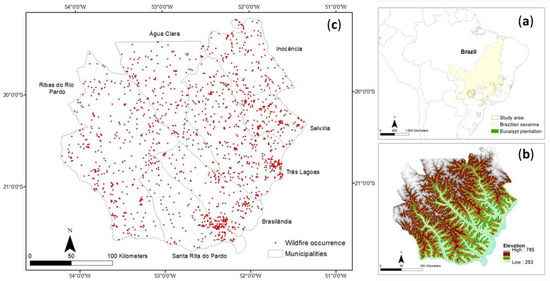