The Behaviour of Small Investors in the Hong Kong Derivatives Markets: A Factor Analysis

The world population in 2000 was more than 6 billion, and is expected to reach 8 billion in 2025, based on projections by United Nation Population Division. The increase in global population, combined with economic development, will place increasing demand on agricultural food products, especially grains, rice, soybeans, and sugarcane. The derived demand for energy crops has been increased significantly due to the development of bio-fuel. Such development can lead to food shortages and increasing international food prices, which will encourage farmers to expand planted acreage. This predicament has increased the derived demand for global fertilizers and increased fertilizer prices.
Fertilizers are combinations of nutrients that enable plants to grow. The essential elements of fertilizers are nitrogen, phosphorus, and potassium. Urea fertilizer is the major fertilizer that provides the element of nitrogen, and is produced through converting atmospheric nitrogen using natural gas. Ammonia and phosphoric acid (hereafter ACID) are also produced using energy. Thus, prices for urea, ammonia, and ACID will be affected by crude oil prices. Monoammonium phosphate (hereafter MAP) and muriate of potash (hereafter MOP) are two other important fertilizers that are sources of phosphorus and potassium. As most of the world’s phosphate for fertilizer is mined, and hence is non-renewable, over the last decade the prices of phosphate and potash fertilizers have risen more steeply than the price of nitrogen-based urea.
Figure 1 shows the trends in six fertilizer prices and Dubai crude oil price during the period 2003-2008. It is clear that most of these prices changed dramatically in 2007 and 2008. Figure 2 shows the trends in the prices of the main fertilizers, including MAP, MOP and urea, and Dubai crude oil weekly prices, from 2003-2008. This figure shows that fertilizers and Dubai crude oil price exhibit positive trends. Moreover, MAP and MOP prices had upsurge in early 2008. These figures show there is a clear positive relationship between global fertilizer prices and crude oil price. Therefore, the main purpose of this paper is to investigate the relationship between crude oil price and global fertilizer prices, in both the mean and volatility. As volatility invokes financial risk, such empirical results should provide useful information regarding the risks associated with variations in global fertilizer prices due to variations in oil price, with significant implications for optimal energy use, global agricultural production, and financial integration.
The remainder of the paper is organized as follows. Section 2 introduces the data, the empirical models are discussed in Section 3, and the empirical results are analyzed in Section 4. Some concluding remarks related to the energy policy implications of the volatility of global fertilizer prices are given in the final section.

The source of the data is divided into two parts. The weekly global fertilizer supply prices are obtained from the Fertilizer Market Bulletin (hereafter FMB) weekly fertilizer report, while the weekly Dubai crude oil prices are obtained from the database in the Bureau of Energy during the period 2003-2008. Table 1 gives the descriptive statistics of six fertilizer prices, including MAP, urea, ammonia, ACID, phosphate rock (hereafter ROCK), and MOP, and Dubai crude oil prices. The MAP prices show a steady upward trend, but have a sharp price spike in February 2008, as shown in Figure 1. The prices of urea and ammonia vary considerably, with steady increases over time. The ACID, ROCK, and MOP supply prices do not fluctuate significantly, but generally have upward trends. The trend in crude oil prices is relatively stable.

Fertilizer can be divided into organic fertilizer and chemical fertilizer, with the latter being a high user of energy. For instance, nitrogen fertilizer production relies mainly on coal and natural gas, so that a causal relationship might be deemed to exist between crude oil and fertilizers prices. Such a relationship may be determined by a Granger Causality test and the autoregressive distributed lag (hereafter ARDL) model. The ARDL model, in which the data determine the short-run dynamics, would seem to be one of the most widely used models for estimating time series energy demand relationships (Jones, 1993; Benten and Engsted, 2001; Jones,1993; Benten and Engsted,2001; Dimitropoulos et al., 2005; Hunt et al., 2005; Hunt and Ninomiya, 2003; Chen et al.,2010).
Hendry(2005) indicates that the ARDL model merges dynamics and interdependence with different illustrations grounded by linear relationships. In this model, the price of a specific fertilizer is interpreted by the lags of itself price and crude oil prices. A general ARDL model for the global fertilizer price can be shown as bellow: where is the global fertilizer price at time t, and is the price of crude oil at time t.
The coefficient means the effect of the j-period lagged crude oil price on the fertilizer price, which implies that the fertilizer price can be predicted by the crude oil price. A test of the null hypothesis that each = 0 is a test of Granger non-causality.
All the variables included in the price should be stationary series to avoid spurious regression results, whereby the asymptotic standard normal results no longer hold. For this reason, the structural breakpoints of the crude oil price are estimated using the two-break minimum Lagrange Multiplier (LM) unit root test of Lee and Strazicich (2003). If and when the appropriate structural breakpoints are found, the fertilizer price equations will be estimated for different periods.

4.1 Minimum LM unit root test with one and two breaks

The empirical results for the unit root tests, which are given in Table 2, generally indicate that the ADF test does not reject the null hypothesis of a unit root. However, MAP, Urea, and ROCK reject the null hypothesis at the 1% significance level, which is consistent with no unit root for these prices, as shown in Table 3, for the minimum LM unit root test with two breaks (see Lee and Strazicich (2003)). The price series for ammonia are tested using the minimum LM test unit root with one breakpoint as two breakpoints were not detected.

As the results for testing the stationarity of the seven series indicate that all are stationary, we examine the relationships between the six fertilizer prices and the price of crude oil using the Granger Causality test (1969). From Table 4, the crude oil price (given as Poil) is found to Granger-cause five fertilizer prices, namely MAP, urea, ammonia, ACID, and MOP, in each period, which indicates that oil prices can be used to predict these five fertilizer prices. However, the crude oil price does not Granger-cause the ROCK price at the 5% level of significance, which may not be so surprising as ROCK is a raw material used to produce phostate fertilizer, and hence does not use considerable energy. Thus, the oil price is not able to predict the ROCK price. 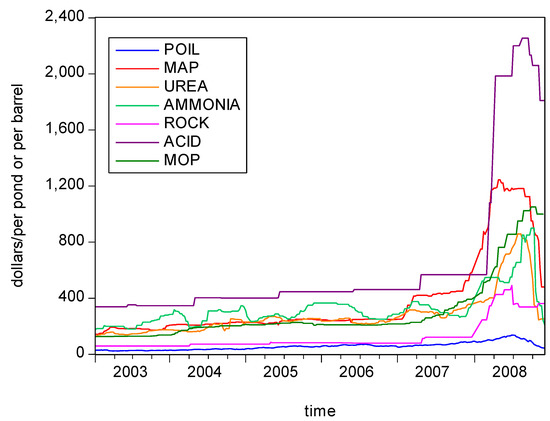 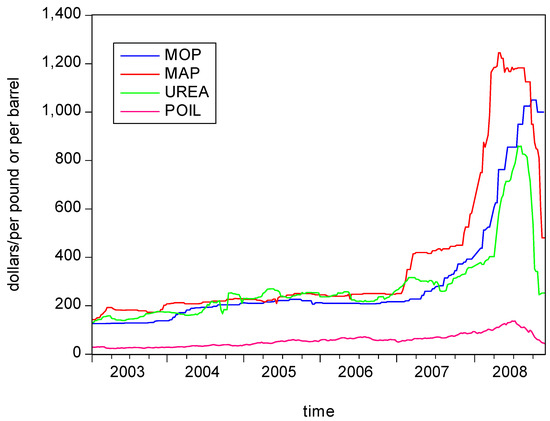 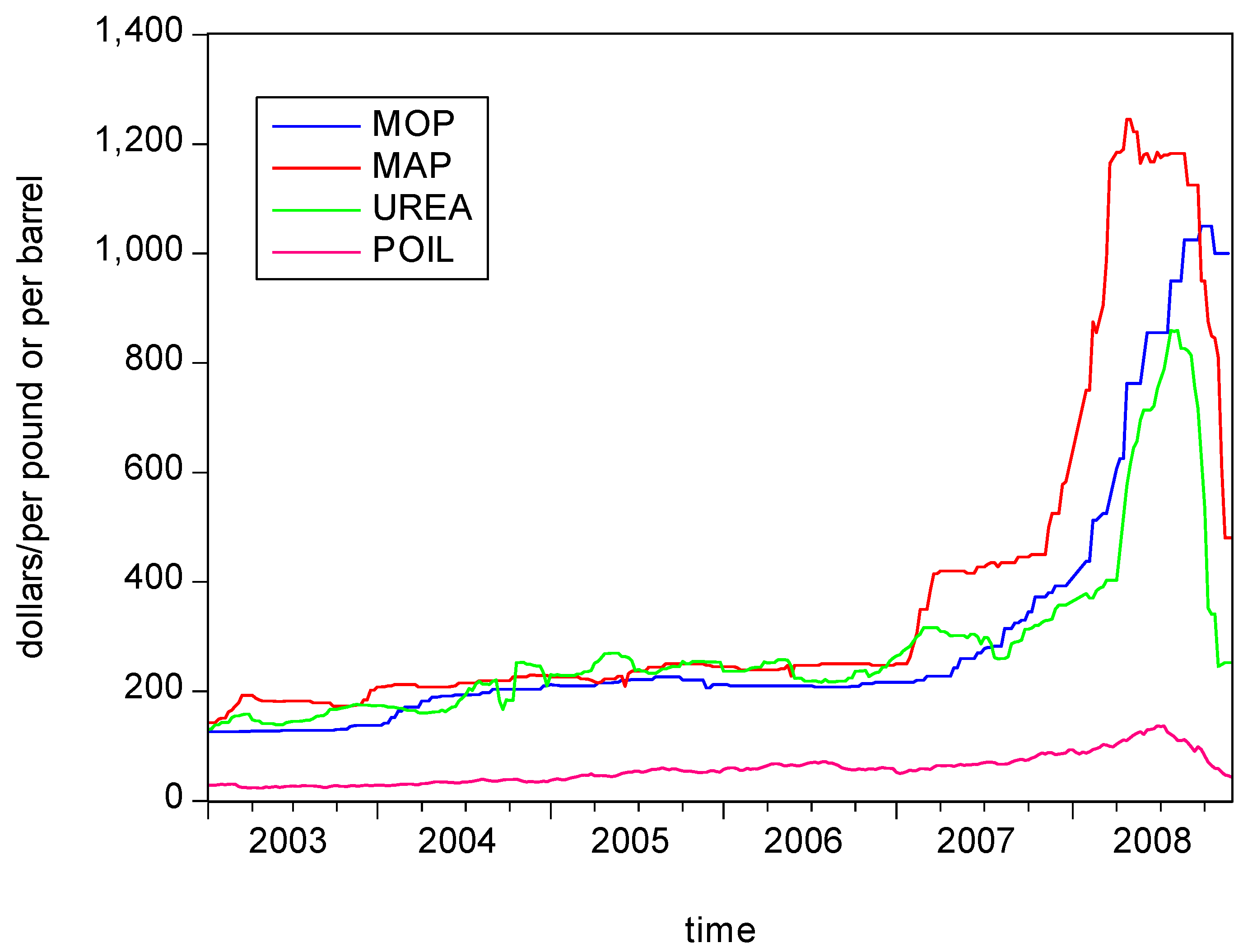 Table 4. The Granger Causality test for six fertilizer prices with crude oil price
Note: The value in table 4 belongs to F-Statistics. * and ** denote significance at the 5% and 1% levels, respectively.

Table 12. The Elasticity of Fertilizer Price with Respect to Crude Oil Price
We use cookies on our website to ensure you get the best experience. Read more about our cookies here.
Accept
We have just recently launched a new version of our website. Help us to further improve by taking part in this short 5 minute survey here. here.
Never show this again