The Impact of Tax Preferences on the Investment Attractiveness of Bonds for Retail Investors: The Case of Russia

For this paper, we dynamically analysed the comovements between three major stock markets—Germany, the UK, and the US—and the countries of the European Union, divided into two groups: Eurozone and non-Eurozone. Correlation coefficients based on a detrended cross-correlation analysis (DCCA) were used, and the respective temporal variation was evaluated. Given the objective of performing a dynamic analysis, sliding windows were used in an attempt to represent short and long-term analyses. Critical moments in financial markets worldwide were also taken into account, namely the subprime debt crisis, the sovereign debt crisis, and Brexit. The results suggest that Germany and other Eurozone countries generally share high levels of comovements, although the Brexit decision reduced those connections. The subprime crisis also increases comovements among markets. View Full-Text
Keywords: comovements; correlation coefficient; DCCA; European Union; stock market integration comovements; correlation coefficient; DCCA; European Union; stock market integration
►▼ Show Figures 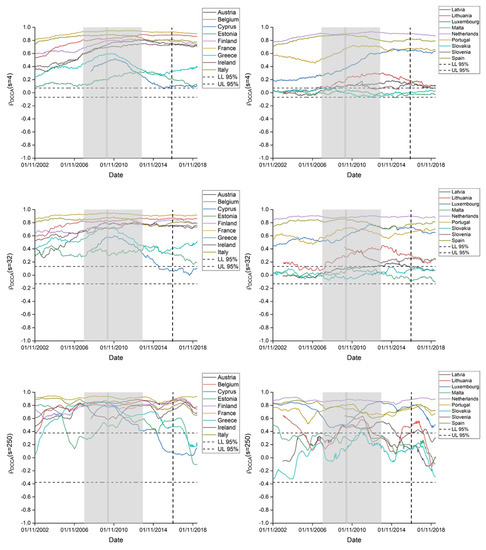