Life-long Programming Implications of Exposure to Tobacco Smoking and Nicotine Before and Soon After Birth: Evidence for Altered Lung Development

In the diagnosis of asbestosis, it is considered to be most important to know about the presence of asbestos dust exposure in the occupational history, but it is not always easy to distinguish asbestosis from chronic interstitial pneumonia or other pneumoconiosis cases. In regard to the asbestosis cases diagnosed with the ILO International classification of Radiographs of pneumoconiosis (profusion rate (PR) of 1/1) or higher, we investigated the number of intrapulmonary asbestos bodies in addition to the occupational history, chest radiological findings, and pathological findings. Previously, while receiving cases as asbestosis in the ILO International classification of Radiographs of pneumoconiosis, we reported that there were cases in which asbestosis could not be diagnosed based on radiological or pathological/histological findings [1]
This time, for a total of 38 surgical and autopsy lung cancer cases that were diagnosed as asbestosis, we added clinical, radiological, and pathological investigations and report on definitive diagnoses of asbestosis from a comprehensive viewpoint.

We targeted 38 cases diagnosed as asbestosis {PR 1/0 or higher} with the ILO International classification of Radiographs of pneumoconiosis in which lung parenchyma tissue was obtained through surgery or autopsy. Among the target cases 3 (7.9%) were asbestosis with lung cancer cases that underwent surgery and 35 (92.1%) were autopsy cases. There were 17 cases (44.7%) of death due to respiratory failure from asbestosis, 20 cases (52.6%) of asbestosis complicated with lung cancer, and 1 case (2.7%) of asbestosis complicated with pleural mesothelioma.
We examined characteristics such as gender, age, asbestos exposure in the occupational history, period of asbestos exposure, and clinical data in the pneumoconiosis management section PR classification. Since we needed to judge the presence of mixed dust pneumoconiosis, because workers in the construction and dismantling industries are often faced with instances in which they may inhale multiple types of inorganic substances, we carefully performed interviews and obtained pathological results [2].
In regard to the image findings for asbestosis, a representative system consisting of three respiratory radiologists and a pulmonologist consulted on the results of the chest x-ray and CT (including HRCT) imaging for the diagnosis. Furthermore, four respiratory pathologists performed histopathological diagnosis. We investigated whether or not asbestosis was present based on radiological or histopathological results, and selected cases that could be definitively diagnosed as asbestosis based on radiological and pathological results. The characteristics of the radiology that show asbestosis are defined as a fibrous change directly underneath the pleura such as subpleural dots, subpleural curvilinear lines, branching opacities, interlobular septum hyperplasia, etc. based on HRCT [3] and there are few images showing typical honeycomb lung and tractional bronchiectasis [4]. The presence of pleural plaque is a good indicator of asbestos exposure, but since pleural plaque is present even in cases of low exposure, this investigation withheld it as a reference observation [5]. Furthermore, pathological characteristics of asbestosis are centrilobular fibrosis developing at the periphery, and fibroblastic foci characteristic of chronic interstitial pneumonia are not often observed. More than 2 asbestos bodies/cm2 of lung tissues are observed by light microscopy. Based on these criteria pathological discrimination from other disease was made [6].
Lung parenchyma tissue that is free of carcinomatous infiltration, acute pneumonia, etc. is dissolved based on the Kohyama method [7], and the number of asbestos bodies is estimated per gram of dry weight lung tissue. It was reported that for asbestosis to develop a level of asbestos exposure exceeding 25 fibers/mL of air X year is required [8], and we judged that less than 5,000 bodies/g dry weight lung tissue indicated a low probability of asbestosis.

Among the target cases, there were 37 male cases and only 1 female case. In regard to the age distribution, the largest group was 70 or younger consisting of 17 cases (44.7%), the majority was 71 or older, and the average was 71.6 ± 9.3 years (median age was 72 years). In terms of the occupational history, the largest group consisted of 19 people (50%) who worked in the dockyards and among them those working with the rigging of ships represented a majority of 10 cases (52.6%) who were exposed to comparatively high concentrations of asbestos. On the other hand, there were a total of 8 cases (Table 1) from other occupations exposed to high concentrations of asbestos: 5 cases of spraying of asbestos, 2 cases of insulation work, and 1 case of asbestos product manufacturing work.
There were 31 cases (81.6%) representing a majority who were exposed to asbestos for over 20 years, and the average was 30.3 ± 12.52 years (mean value of 32.5 years). In the previously mentioned 8 cases who were exposed to high concentrations of asbestos in their work, 5 cases who were involved with asbestos spraying work were exposed for a relatively short number of years of 7–22.2 years (mean value of 18 years). There were 5 cases that did not indicate pneumoconiosis findings of PR1/1 classification or greater at the time of diagnosis. These 5 cases, although the chest CT showed fibrosis indicating asbestosis, the chest x-ray findings indicated a classification of PR1/1. Furthermore, there were 11 cases categorized as PR1, 13 cases categorized as PR2, and 9 cases categorized as PR3. The majority of the cases were classified as PR2 or higher.
There were 13 cases in which asbestosis characteristics which included subpleural dots, curvilinear lines, branching opacities etc show the centrilobular fibrosis were manifested in the images including High Resolution CT (HRCT). There were 4 cases that showed subpleural dots, subpleural curvilinear lines, branching opacities, and interlobular septum hyperplasia [3] in the HRCT which indicated asbestosis. These 17 cases (44.7%) of diagnosed asbestosis were based on radiology. The PR classifications for the 17 cases were 2 cases of PR1, 10 cases of PR2, and 5 cases of PR3.
On the other hand, there were 11 cases in which there were fibrosis findings in the chest x-ray, and it was judged there was the possibility of asbestosis in these cases. Furthermore, there were 6 cases diagnosed with classical asbestosis (Figure 1). There was only one case of atelectasis hardening which is the most typical type of asbestosis. However, there were 6 cases in which there were only findings of pulmonary emphysema (Figure 2) or where the presence of fibrosis could not be clarified based on chest x-ray.
In terms of pleural lesions, there were 30 cases (78.9%) with medical findings of asbestos exposure such as pleural plaque, and only 4 cases of diffuse pleural thickening were found. Namely, the presence of pleural plaque could not be confirmed in 8 cases. Among the 17 cases of diagnosed asbestosis based on radiology, there were 3 cases (17.3%) in which pleural plaque was not confirmed.
There were 17 cases (44.7%) that indicated histopathologically bronchial wall fibrosis, peripheral fibrosis, or fibrosis that was non-contradictory to asbestosis. Although pathologically it is characteristic of asbestosis that asbestos bodies are present on the bronchial wall or there is peripheral fibrosis, there were 3 cases (7.9%) in which chest x-ray did not indicate fibrosis. Furthermore, there were 21 cases of honeycomb lungs and almost the same number of cases (17 cases) without it (Table 2). There were also 12 cases (Figure 3) in which asbestos bodies were not present in histopathological specimens (Table 2). Among all of these cases, there were only 10 cases (26.3%) in which both the radiological and histopathological examinations indicated asbestosis (Table 3). In the occupational histories, there were 5 cases of asbestos spraying work, 4 cases of dockyard rigging work, and 1 case of asbestos product manufacturing work (Table 3). Furthermore, these 10 cases were exposed to extremely high concentrations of asbestos in which the average concentration of asbestos bodies in the lung was 1,434,594 ± 901,861 (mean value of 1,379,827) (Figure 4). The pneumoconiosis classification for these cases was 1 case of PR1/0, 1 case of PR1/1, 3 cases of PR2/2, 1 case of PR2/3, 3 cases of PR3/2, and 1 case of PR3/3.
The concentration of asbestos bodies in the lung for the cases where asbestosis could be diagnosed based on radiology was the average of 873,978 ± 966,829 (mean value of 451,323) and that for cases where asbestosis could be diagnosed based on pathology was the average of 965,387 ± 945,259 (mean value of 657,727). For the 6 cases in which we find typical asbestosis based on radiological and histopathological findings there were the average of 2,068,255 ± 568,089 bodies (mean value of 2,133,255) and all cases exceed 1,000,000 bodies/g of dry lung tissue (Figure 5). There were also 6 cases in which there were 5,000 bodies or less. In the occupational histories of these 6 cases, there were 2 cases each in which they worked in construction and ironworks, and there was 1 case each in which the patient worked in brick production and hoisting (crane) work in a dockyard. In these cases, based on radiology and pathology they were diagnosed not as asbestosis, but instead as emphysema accompanied by fibrosis.
As above, although pathologically asbestosis is indicated, in 5 cases based on radiology we did not find more than 1 type of results for asbestosis and 6 other cases were thought not to be asbestosis when taking into account all radiological results, pathological findings, asbestos particle concentration, and occupational history. For the total of these 11 cases, we conclude that comprehensively that these were not asbestosis and other 4 cases were possible asbestosis.

The authors express their gratitude to Kouichi Honma, Department of Pathology Dokkyo Medical School and Kenzou Okamoto, Pathology Hokkaido Chuo Rosai Hospital for providing the asbestosis cases for this research project and for their detailed consultation on the pathological findings. And authors also express their gratitude to Masaaki Fujiki and Sumie Senoo for the counting asbestos bodies in the lung tissue. Financial/nonfinancial disclosures: This research is supported by Research on Occupational Safety and Health from Health and Labour Sciences Research Grants. 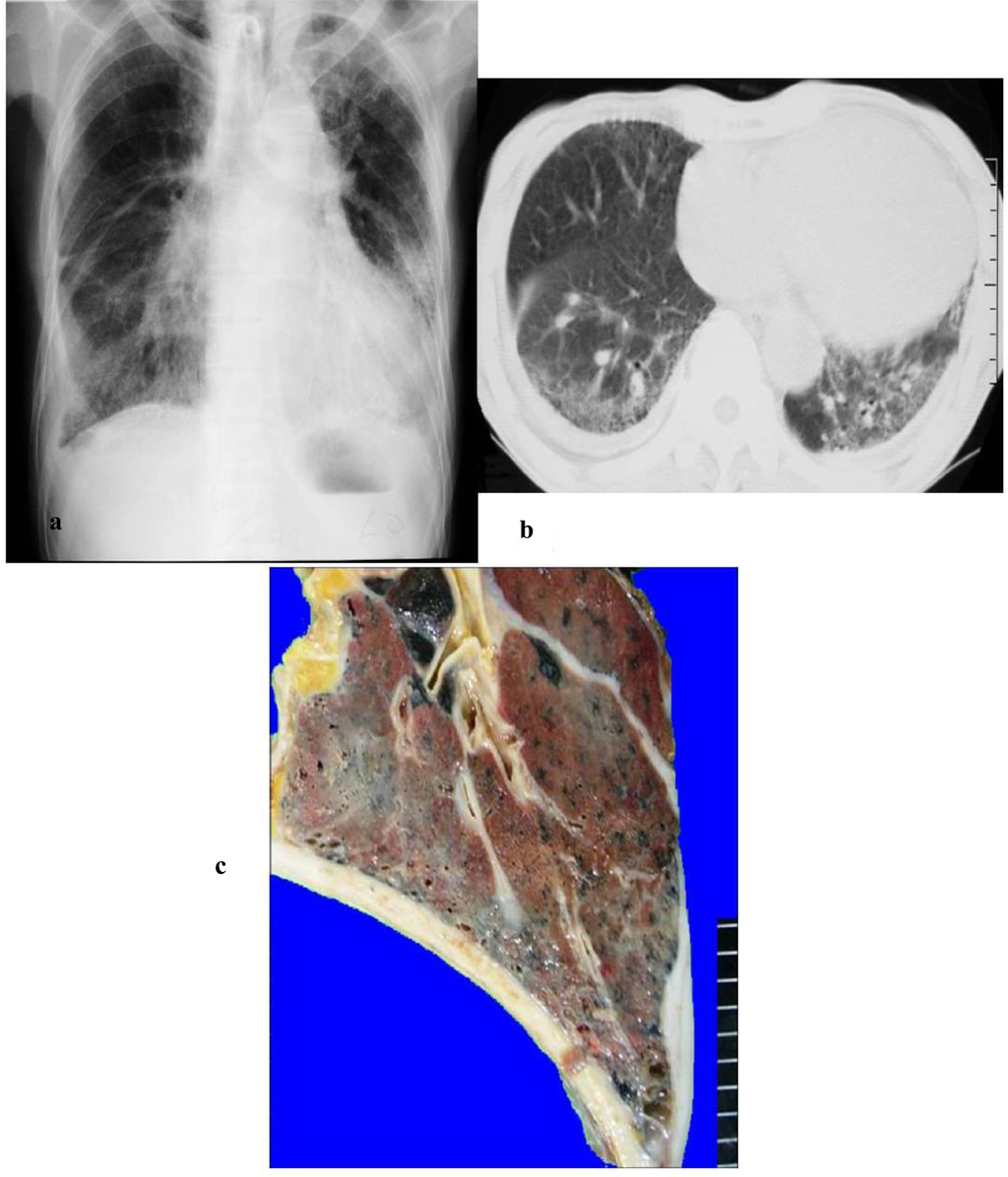 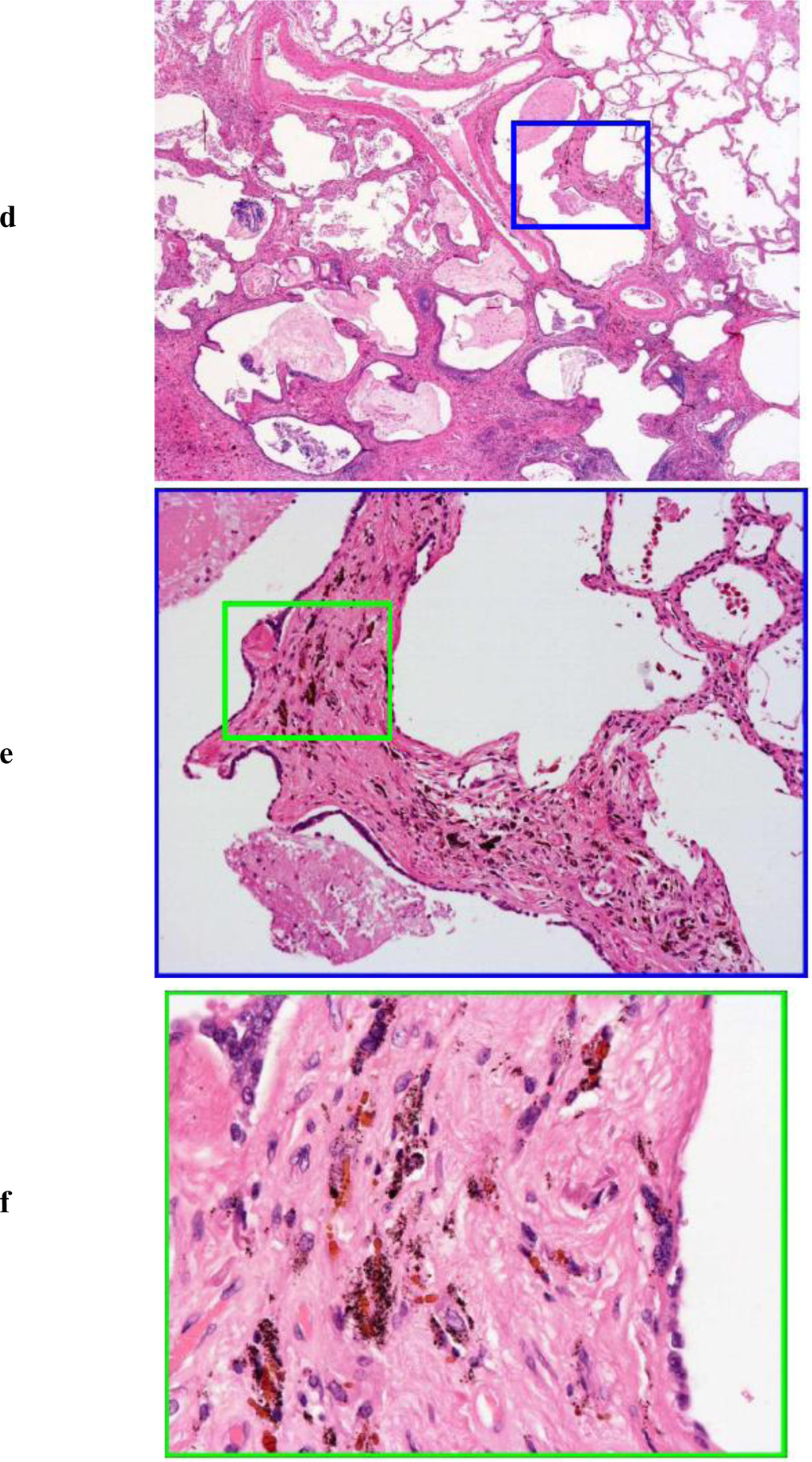 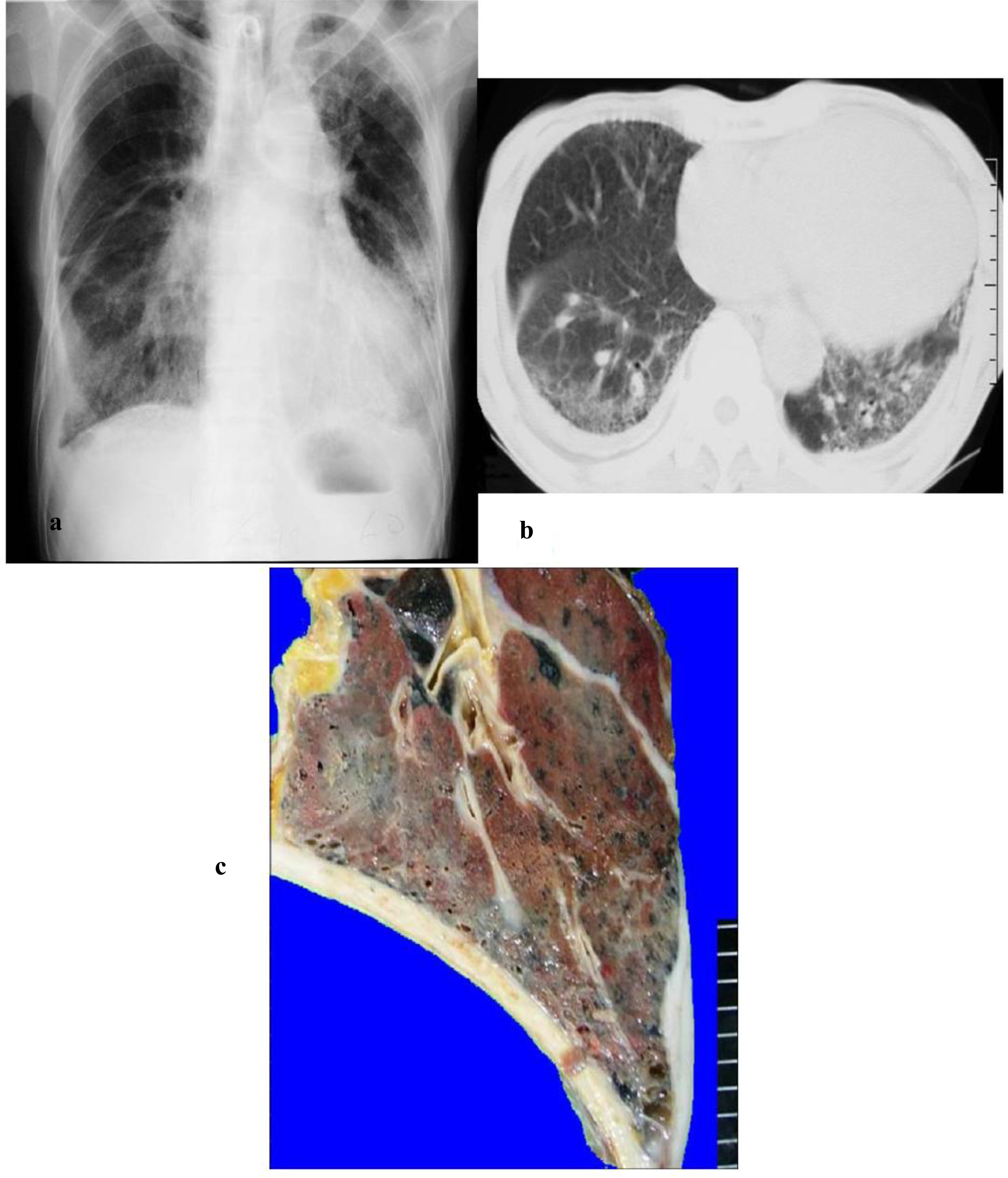 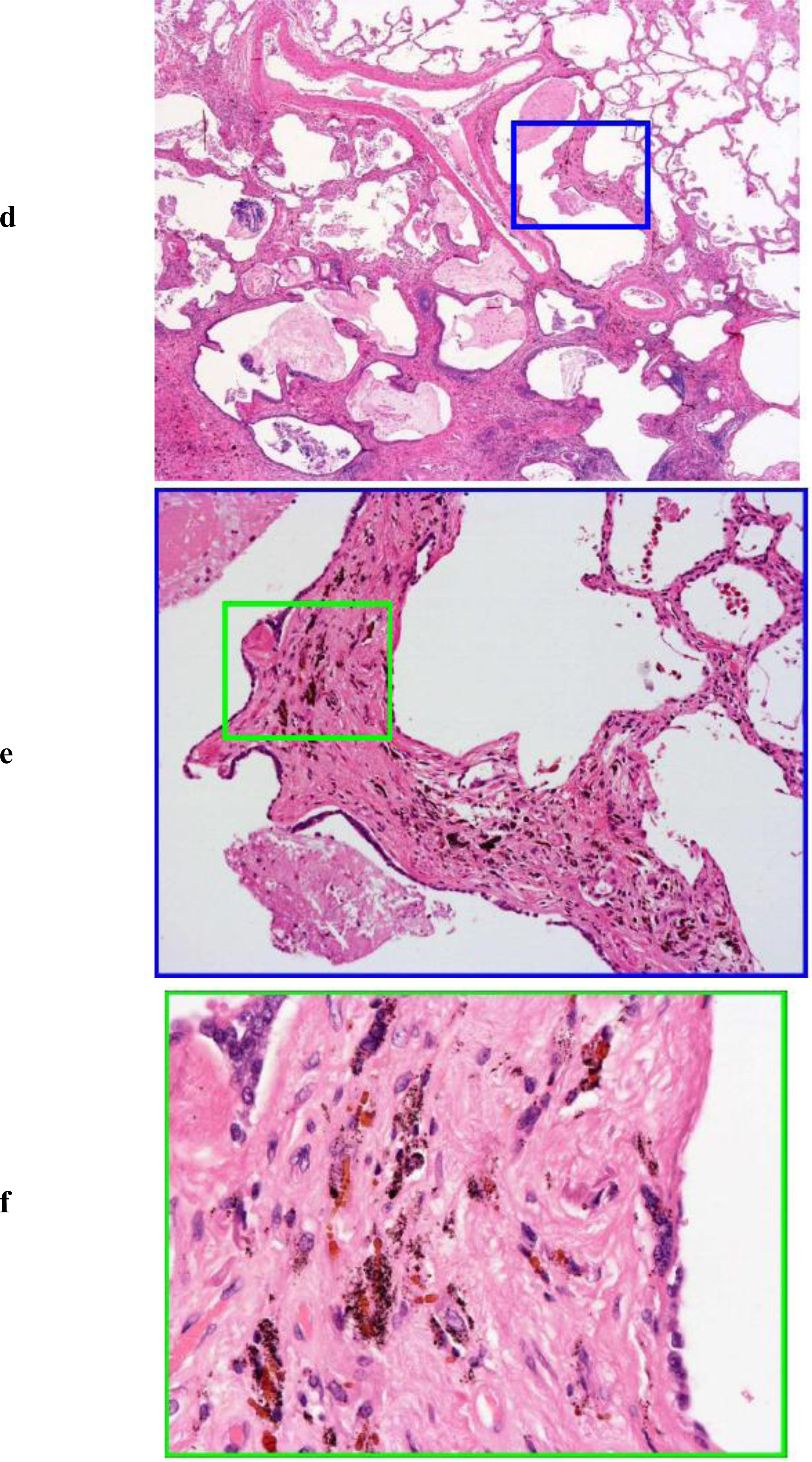 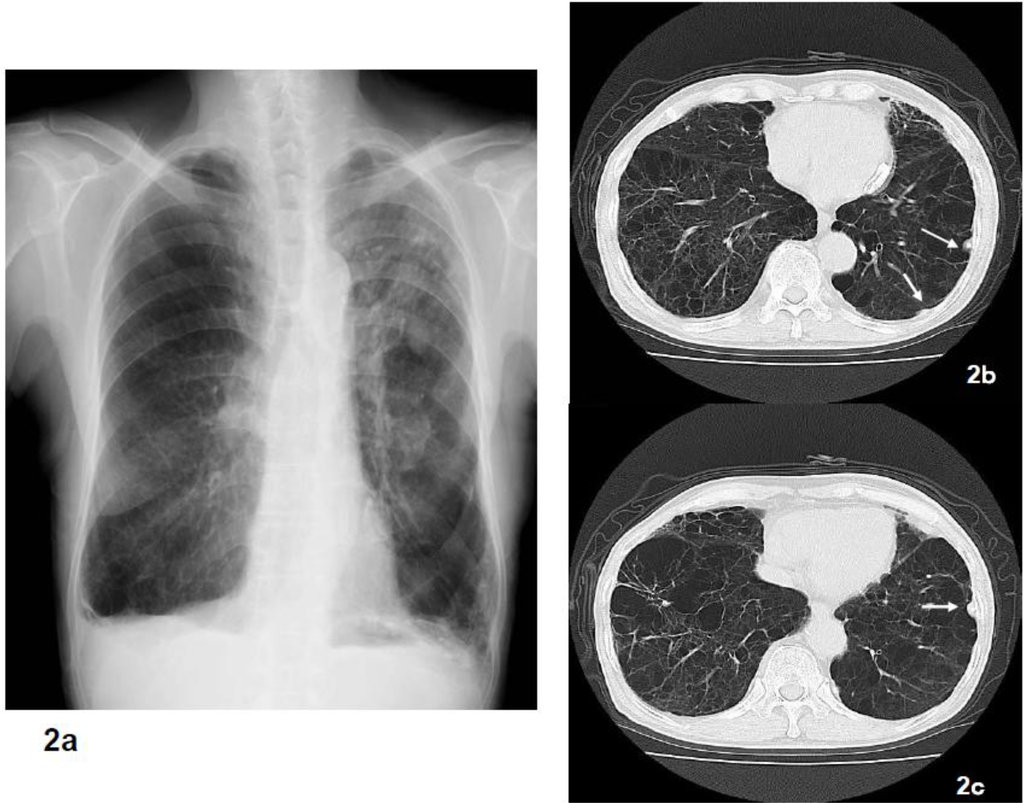 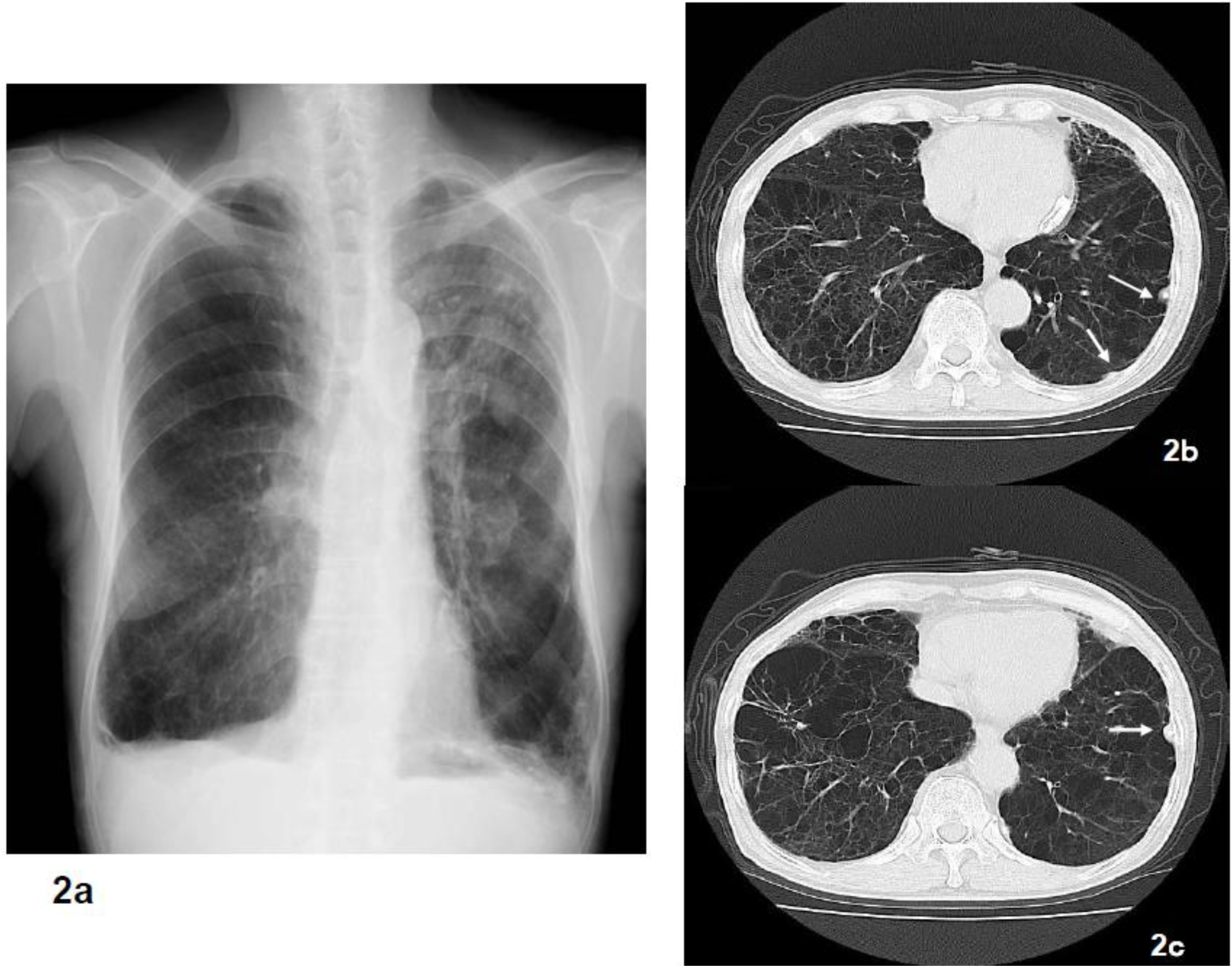 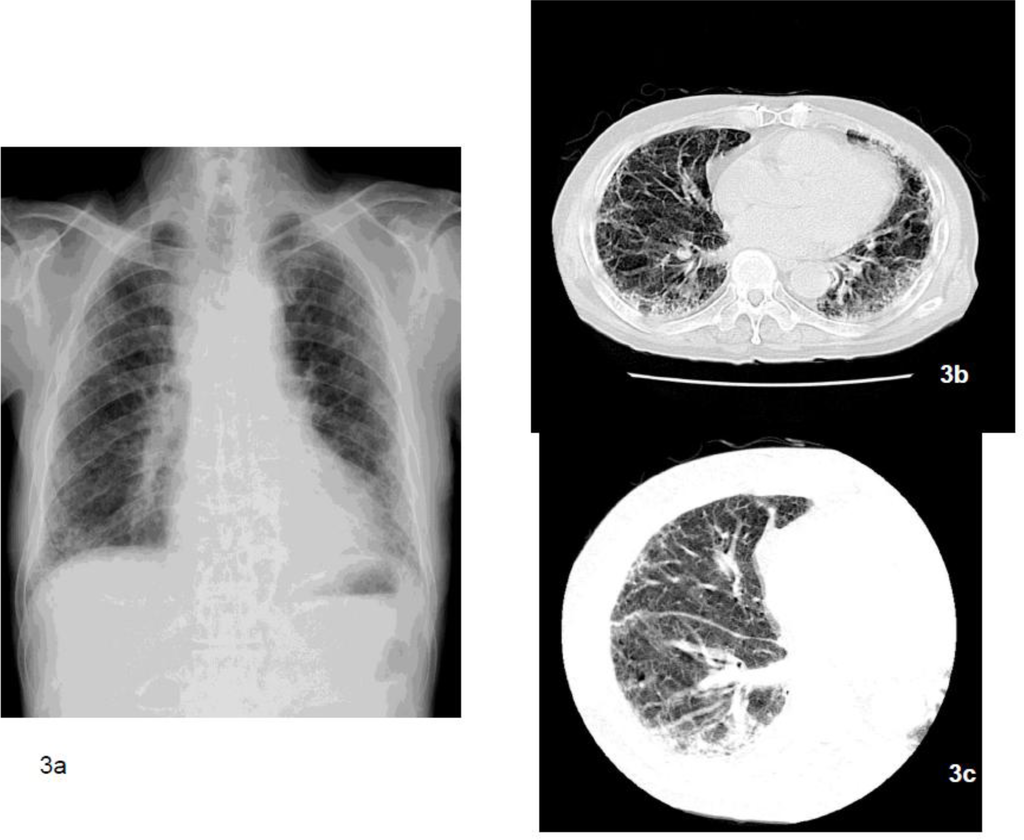 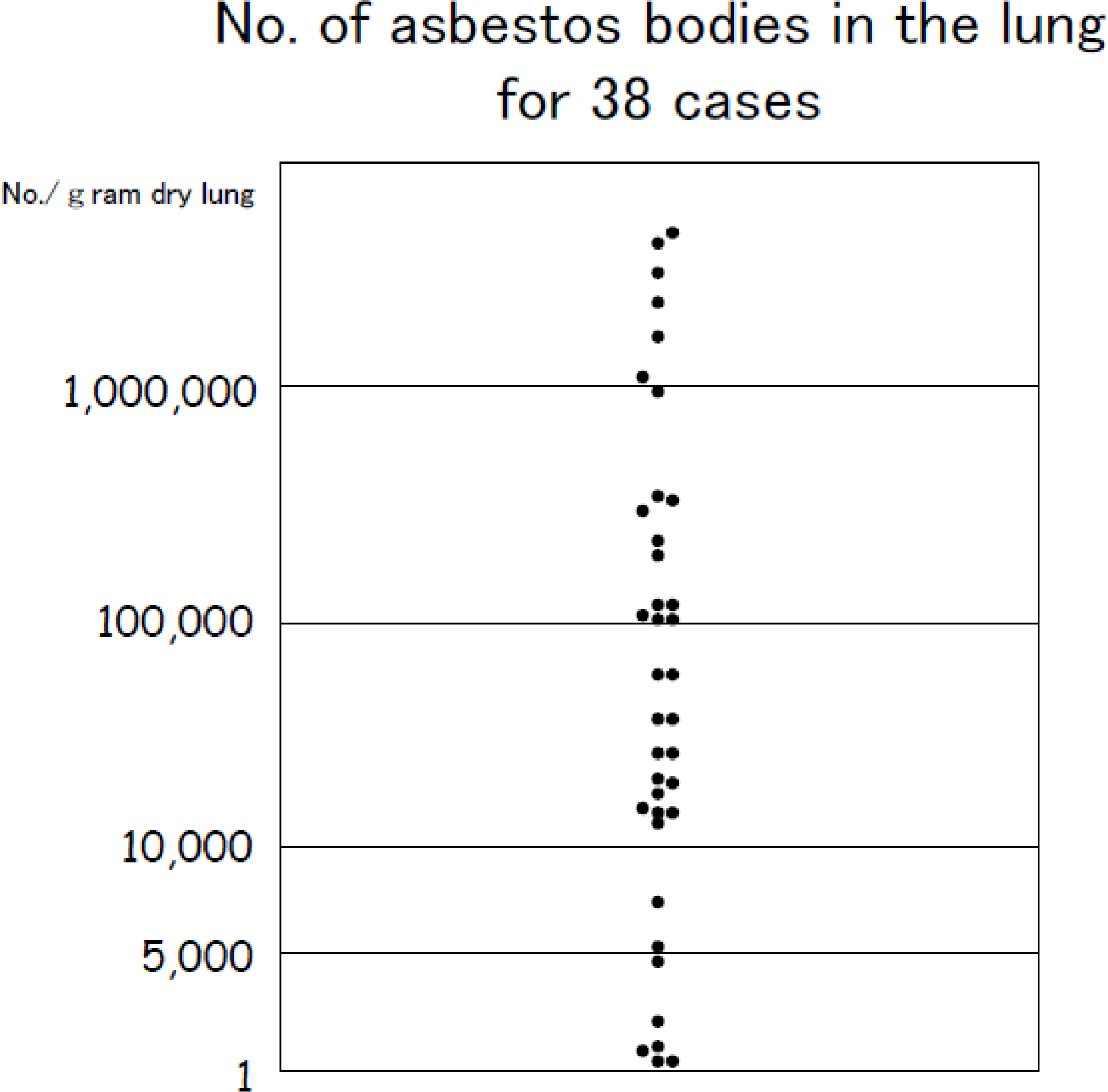 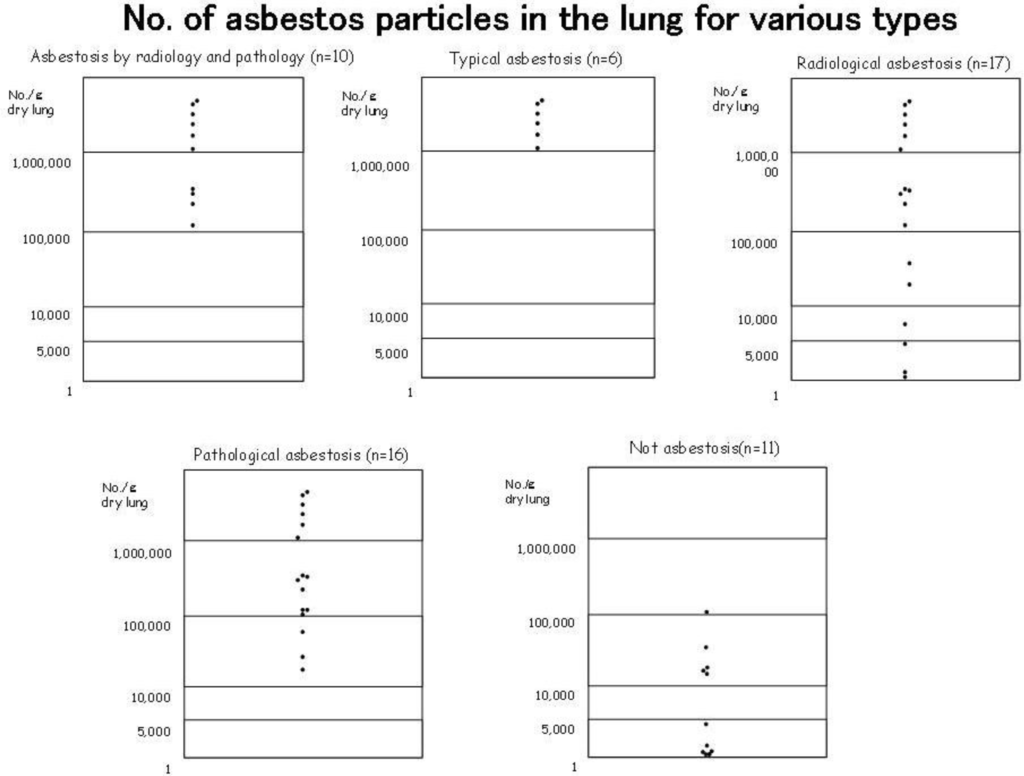 Table 2. Honey combing and asbestos bodies in the histology.

Table 3. Cases of asbestosis by radiological and pathological findings.

© 2011 by the authors; licensee MDPI, Basel, Switzerland This article is an open-access article distributed under the terms and conditions of the Creative Commons Attribution license (http://creativecommons.org/licenses/by/3.0/).