Since 2003, congenital malformations have increased to account for 15% of all births in Fallujah, Iraq. Congenital heart defects have the highest incidence, followed by neural tube defects. Similar birth defects were reported in other populations exposed to war contaminants. While the causes of increased prevalence of birth defects are under investigation, we opted to release this communication to contribute to exploration of these issues. By using a questionnaire, containing residential history and activities that may have led to exposure to war contaminants, retrospective reproductive history of four polygamous Fallujah families were documented. Our findings point to sporadic, untargeted events, with different phenotypes in each family and increased recurrence. The prevalence of familial birth defects after 2003 highlights the relevance of epigenetic mechanisms and offers insights to focus research, with the aim of reducing further damage to people’s health.
Keywords: Iraq; birth defects; war contaminants; epigenetics Iraq; birth defects; war contaminants; epigenetics

In Fallujah (Iraq), birth defects, with prevalence of congenital heart defects (CHD) and neural tube defects (NTD), have reached in 2010 unprecedented numbers, above the World average [1]. Lack of a comprehensive birth registry has made it difficult to make an accurate comparison with the pre war period and to understand modalities and dimension of this unusual occurrence in Fallujah. We thus introduced a protocol allowing for reconstruction of the reproductive history of families with birth defects in Fallujah that allows to see the pattern of their presentation in time. We present here the analysis of four cases of fathers with two lineages of progeny, chosen among more than 50 cases under study. Birth defects presented here are classified according to the primary defect as NTD (neural tube defects), CHD (cardiac birth defects), SK (skeletal defects), even when they have additional phenotypes, or O (others). Modalities of presentation within each family suggest that epigenetic factors may be at the origin of the mechanisms responsible for these defects. The timing of the birth defect occurrences suggests that they may be related to war-associated long-term exposure to contamination.
The epigenetic origin of many birth defects is extensively supported by the existing literature [2]. Neural tube defects are rarely due to traceable genomic changes. The high rate of recurrence of anencephaly in siblings (6.3%) is understood as due to environmental factors and maternal effects. Studies of NTD in mice indicate that anencephaly may be due to multifactorial combinations of hypomorphs and low-penetrance heterozygotes. It is not known how many genes may contribute to anencephaly in humans.
Congenital heart defects have various phenotypes and can be compounded by different cardiac-unrelated features. Approximately 30% of CHD and tetralogy of Fallot (TOF) have been shown to be associated with wide genomic rearrangements. Only in a very small fraction of the cases investigated have cohort studies detected mutations in single genes which are putatively involved (e.g., Holt-Oram syndrome). Environmental factors are implied in the induction of most CHD phenotypes, through epigenetic mechanisms.
In mice, cleft lip is caused by epistatic interactions in the context of genetic maternal effects. Cleft lip and palate inheritance patterns suggest that the causes are combinations of genetic and nongenetic factors. Also in mice, synpolydactyly is linked to Hoxd13 mutations and its manifestation is dependent upon environmental factors.
Tumorigenesis is a multistep process involving mutations and epigenetic changes [2]. Repeated cases of infant leukemia in families are due to genetic predisposition and epigenetic changes that can occur in-utero by epigenetic modifiers. Transplacental effector-molecules and epigenetic trans-generational mechanisms are implied in the manifestation of infant leukemia.
Thus, although in teratogenesis and infant leukemia can occur through genomic rearrangements or concurrence of multiple single mutational events, they are most often described and understood to be due to pleiotropic epigenetic changes which affect more than one function, or to a combination of these three mechanisms.
Many known war contaminants have the potential to interfere with normal embryonic and fetal development. The devastating reproductive health effects of dioxins (the major contaminant of Agent Orange) on the Vietnamese people is well known. Data is also accumulating on increased rates of reproductive diseases in veterans of U.S. and U.K. wars during the last 20 years. As environmental effectors, metals are potential good candidates to cause birth defects. Metals are also integral to modern “augmented” and “targeted” weapons [3]. Metals, which are toxicants at relatively low concentrations, are highly persistent in the environment and in the body of exposed individuals, where they accumulate. Metals can disrupt events associated with embryo/fetal development and can act synergistically with other metals and/or with other environmental toxicants to induce phenotypic changes at the level of the cell, and to disrupt tissue homeostasis [4]. Many metals are weak mutagens but strong carcinogens, which implies that metals act more commonly at the epigenetic level leading to changes that are inherited by the progeny of cells.
The analysis of four cases of fathers with two lineages of progeny is presented here. In each case, we discuss what can be deduced from the family’s reproductive history, from the phenotypes of their offspring and from the modality of birth defects’ chronological occurrence. We discuss the compatibility of occurrence of birth defects with the actions of potential effectors, with the demographic of the families, and with the exposure of the parents to war-related events. We have put our evaluation into the context of mechanisms of actions for teratogens. The timing of presentation of birth defects in these families shows that they mostly occurred after 2003.

We developed an ad hoc questionnaire to collect the retrospective reproductive history of families that had come to Fallujah General Hospital for childbirth and treatment. Questions about history of residence, demographic characteristics and lifestyle habits of the parents, and activities that may have led to their exposure to war-contaminants, were included.

We conclude that the high prevalence of birth defects in Fallujah is impairing the population’s health and its capacity to care for the surviving children. These defects could be due to environmental contaminants which are known components of modern weaponry. Investigations of metal contaminants, and elucidation of the types and body burden of metals, combined with simultaneous registry of the population’s reproductive history, will allow the identification of families at high risk and will facilitate therapeutic measures to remediate the damages.

Thanks are due to S. Allawi for her suggestions and problem solving, and to E. Burgio for critical reading of the manuscript. We further thank Blaine Coleman for technical support and language editing of this work. We also recognize “Kuala Lumpur Foundation to Criminalize War” for funding. 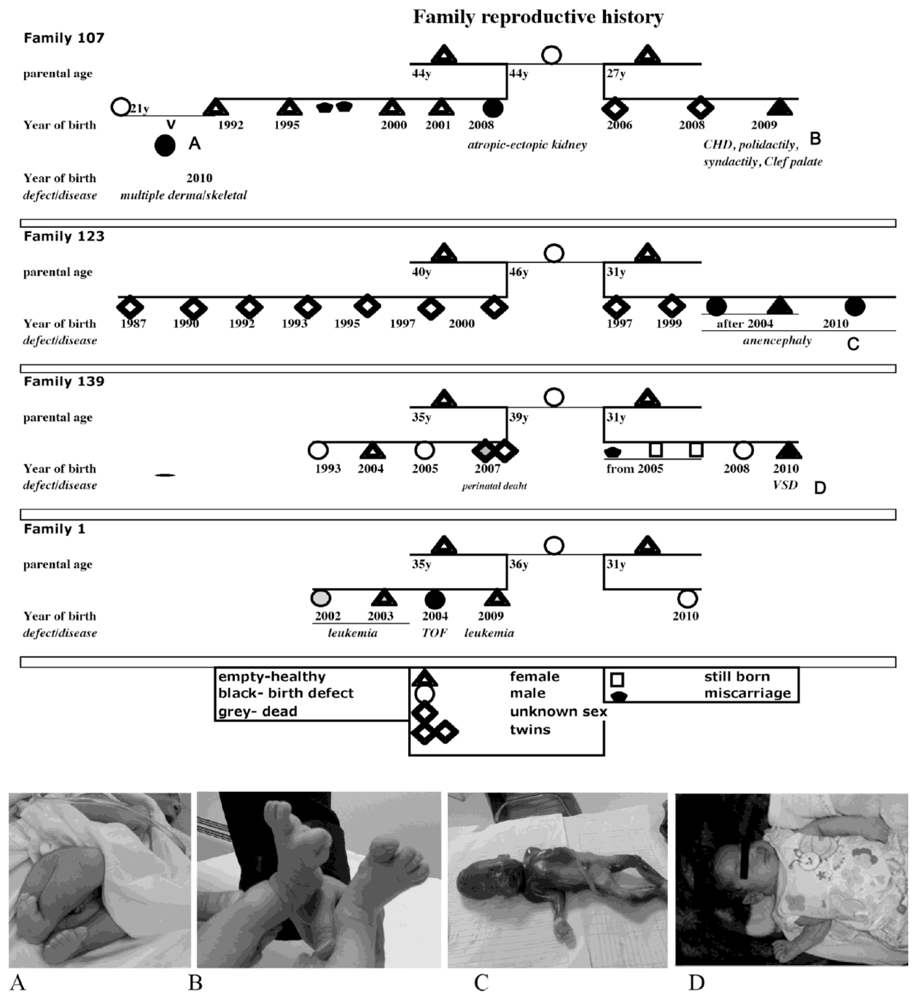