Typhoid continues to be a concern in developing nations especially in South-East Asia, due to unsafe water, contaminated food and lack of basic sanitation measures across large numbers of the population [1]. Salmonella enterica serovar Typhi causes Typhoid fever in humans [2] with infants, children and adolescents being most strongly affected [3]. In addition, an annual estimate of 800,000 to 4,000,000 of non-typhoidal infections [4] with approximately 1.3 billion cases of Salmonella related human gastroenteritis are reported [5]. Salmonella enterica serovar Typhimurium is widespread in its environmental distribution in many parts of South-East Asia, as evidenced from its isolation from rivers, sewage and other waterbodies [6] and infections are mostly associated with consumption of water and food items that have been contaminated, often due to improper handling/storage [7].
The most common causes of human salmonellosis are reported to be serovars Typhimurium and Enteritidis accounting for 57–67% of total isolates annually [7]. Salmonella Typhimurium is the most common non-typhoidal serovar isolated in India [8] and has the potential to cause systemic infections in humans, leading to medical complications as it can survive in different reservoirs and is easily transmitted through water and poultry to humans [9]. Infection of mice with Salmonella Typhimurium causes a disease similar to the one caused by Salmonella Typhi in humans [10]. Salmonella Typhi though a major cause of morbidity and mortality in humans is avirulent in animals, including mice [11].
Storage of drinking water is a common practice in rural homes in developing nations such as India [12] and studies have demonstrated the spread of Salmonella Typhimurium through contamination of stored water [13]. A number of point-of-use disinfection methods have been used to combat such waterborne infectious bacterial diseases in stored water and these include boiling [14], biosand filters [15] and chlorination [16].
More recently, the antibacterial potential of water storage in copper and brass vessels against common waterborne pathogens such as Escherichia coli, Enterococcus faecalis [17–18], Salmonella and Vibrio cholerae [19] has been studied. Short-term storage of E. coli and E. faecalis for up to 48 h in a brass water storage vessel caused sub-lethal injury to the bacteria [17] as demonstrated by a higher bacterial count under enumeration conditions designed to neutralise the damaging effects of reactive oxygen species [20]. Equivalent studies on effect of solar disinfection on infectivity of Salmonella Typhimurium in mice demonstrated that bacterial cells exposed to irradiation for 1.5 h were less infective than their non-irradiated counterparts and did not pose a potential infection hazard [21].
The present study was conducted to observe the effect of storing water containing Salmonella Typhimurium in a copper water storage vessel when compared with Salmonella Typhimurium not exposed to such copper stress, by elucidating various host and bacterial mechanisms operative in pathogenesis of the bacterium.

Salmonella Typhimurium strain 1,251 was obtained from the Institute of Microbial Technology, Chandigarh. The strain was studied at Panjab University, Chandigarh, India. Stocks were maintained by sub-culturing every 15–20 days on nutrient agar (HiMedia, Mumbai, India). For experimental procedures, a single colony of the bacterial strain was inoculated into 100 mL of nutrient broth and incubated overnight at 37 °C without shaking. The overnight culture was then centrifuged at 5,300 g for 5 min at 5 °C and rinsed twice with 0.85% NaCl to remove all traces of growth medium and the count was adjusted to approximately 2.2 × 107 CFU. To obtain copper-stressed bacteria, the pellet was suspended in the same volume of sterile distilled water and then diluted to 1:100, i.e., 100 mL of bacterial suspension was added to 10 L of sterile distilled water, pH 7.0. This bacterial suspension was stored in the copper vessel for 6 h, the time of storage being standardized from preliminary experiments conducted in our laboratory wherein, it was observed that 6 h storage of water containing E. coli in a copper vessel resulted in an increased injured bacterial count without completely inactivating the cells as demonstrated by a higher count under reactive oxygen species neutralised conditions (ROS-neutralised) as compared with normal aerobic conditions [20]. The suspension was then centrifuged at 5,300 g for 5 min at 5 °C, rinsed twice with 0.85% NaCl and finally suspended in 0.85% NaCl and enumerated under normal aerobic conditions and under ROS-neutralised conditions. The final inoculum thus contained approximately 1.6 × 107 CFU mL−1 of healthy uninjured bacterial cells and 4.7 × 107 CFU mL−1 of injured bacterial cells (6.3 × 107 CFU mL−1 ROS-neutralised count— 1.6 × 107 CFU mL−1 healthy cell count).

Sterile distilled water adjusted to pH 7.0 was used. Copper vessels (12 L capacity), obtained from the local market in Chandigarh were disinfected, scrubbed and rinsed thoroughly to remove any adherent contamination/dust from the inner surface. Glass flasks of equivalent volume were used as controls. The mouths of all vessels were kept covered with sterile paper during the test procedure, to prevent airborne contamination of the water stored within.

Outbred female LACA mice, 6−8 weeks old, weighing 20−25 g were used in the present study. The animals were obtained from The Central Animal House, Panjab University, Chandigarh, India. The present study was designed with an outbred strain of mice as the research required a vigorous supply of mice that could be obtained in reasonable numbers without large expense, and therefore specific considerations of genotypes were less important. All the animals were given an antibiotic-free diet and were provided with water ad libitum. For each experiment, two groups of 18 mice per group (2 mice per time point sample) were used; one group was administered unstressed Salmonella Typhimurium and the second group of mice was administered copper-stressed Salmonella Typhimurium. Each experiment was conducted in triplicate. All of the experiments were carried out strictly according to the guidelines and under the approval of the Animal Ethical Committee, Panjab University, Chandigarh.

Two groups of 18 mice each were deprived of food overnight. They were then fed with 100 μL of sodium bicarbonate, followed by infection using a gavage needle with (i) unstressed Salmonella Typhimurium and (ii) copper-stressed Salmonella Typhimurium. To determine bacterial loads in ileum, blood, liver and spleen, mice were sacrificed by rapid cervical dislocation at 0, 6, 24, 48, 72, 96, 120, 144 and 168 h post-infection. Organs were homogenized in 3 mL of 0.85% NaCl, serially diluted in 0.85% NaCl and then plated on nutrient agar plates. In case of blood counts, blood was extracted from the mice using cardiac puncture, appropriately diluted in 0.85% NaCl and plated onto nutrient agar plates and incubated under aerobic conditions.

The bactericidal action of serum against (i) unstressed Salmonella Typhimurium and (ii) copper-stressed Salmonella Typhimurium was tested according to the method of Taylor and Kroll (1983) [22]. 250 μL of either of the bacterial suspensions was incubated with 500 μL of pre-warmed pooled normal mice serum, then 10-fold dilutions were made in 0.85% NaCl at 0, 1, 2 and 3 h and 20 μL of each dilution was plated onto sterile, dry nutrient agar plates using the Miles and Misra surface droplet method [18]. The plates were then incubated overnight at 37 °C under aerobic conditions and the colony count was expressed as CFU mL−1 by adjusting for volume and dilution.

The phagocytic potential of peritoneal macrophages was assessed according to the method of Allen et al. (1987) [23]. Isolation of peritoneal macrophages was carried out using peritoneal lavage fluid of mice infected orally with unstressed as well as copper-stressed Salmonella Typhimurium. To obtain peritoneal lavage fluid, the mice peritoneal cavities were carefully exposed by surgically removing the skin layer of the abdomen using sterile scissors and forceps without disrupting the blood vessels. A volume of 8−10 mL RPMI-1640 medium was injected into the cavity and the abdomen was massaged for 1−2 min. The peritoneal lavage was sucked back using a syringe and added to a sterile glass Petri dish. The Petri dish was incubated at 37 °C for 1 h in a CO2 incubator to allow adherence of the macrophages to the surface of the dish. The supernatant was then removed and the layer of adherent cells was detached from the surface of glass using a rubber-covered glass rod. The macrophages were washed twice with RPMI-1640 after centrifuging at 102 g for 5 min.
Bacterial uptake by peritoneal macrophages was observed by adding 0.4 mL of mouse serum to 0.5 mL of a macrophage cell suspension (108 cells mL−1) and 0.1 mL of (i) unstressed and (ii) copper-stressed bacterial suspension in separate sterile microcentrifuge tubes. The microcentrifuge tubes were then incubated at 37 °C under 5% CO2 atmosphere. After 0, 30, 60 and 90 min, a 20 μL aliquot of the cell suspension was withdrawn and added to 2 mL of ice cold RPMI-1640 medium, centrifuged at 330 g for 10 min and the bacterial count in the supernatant was determined by spreading 20 μL of serial 10-fold dilutions onto nutrient agar plates, incubated at 37 °C under aerobic conditions. The bacterial counts were expressed as the percentage of the initial inoculum taken up by peritoneal macrophages at the respective sampling times.
To determine intracellular inactivation of bacteria by peritoneal macrophages, bacterial opsonization was carried out by adding 4.5 mL of (i) unstressed and (ii) copper-stressed bacterial suspension to 0.5 mL of mouse serum and then incubating at 37 °C for 30 min under a 5% CO2 atmosphere. The cell suspensions were then washed twice with 2.5 mL of 0.85% NaCl. These opsonised bacterial suspensions were then added to 0.5 mL of macrophage cell suspension (108 cells mL−1) in endotoxin-free RPMI 1640 medium-supplemented with 5% foetal calf serum containing no antibiotic. The suspensions were incubated for 20 min at 37 °C under a 5% CO2 atmosphere to allow bacterial inactivation to take place within peritoneal macrophages. Removal of non-phagocytosed bacteria was carried out by centrifuging the suspensions at 330 g for 5 min at room temperature and washing the pellets twice with 0.85% NaCl. The pellets thus obtained were suspended in 2 mL RPMI-1640 medium containing 5% foetal calf serum and 50 μg mL−1 of gentamycin and then incubated at 37 °C under a 5% CO2 atmosphere. The cells were lysed at 0, 1, 2, and 3 h post-incubation by suspending 1 mL aliquots in 0.85% NaCl containing 0.5% sodium deoxycholate. Subsequently, 20 μL aliquots of serial 10-fold dilutions of the cell suspensions were spread onto nutrient agar plates as before. Colony counts were carried out after overnight incubation at 37 °C under standard aerobic conditions and expressed as percentage of bacteria in peritoneal macrophages at each sampling time interval compared to the initial value.

The ileum of two groups of mice infected orally with (i) unstressed (ii) and copper-stressed Salmonella Typhimurium was subjected to histopathological analysis. The ileum of experimental mice was excised at pre-determined time intervals post-infection and was fixed in 10% v/v formalin. Histological examination was then carried out by dehydrating, paraffin embedding, blocking, sectioning and staining with a standard hematoxylin eosin technique [26]. The sections were mounted in DPX.

Copper stress achieved by short term storage (6 h) in a copper water storage vessel conferred a decrease in infectivity of Salmonella Typhimurium in normal mice as demonstrated by the decreased pathogenicity in colonizing organs such as ileum, liver and spleen. Though the stressed bacteria were able to circulate systemically by surviving in blood for a short time period, the lytic action of serum coupled with phagocytosis by peritoneal macrophages caused a complete clearance and subsequent recovery from this initial mild infection. Further studies are now required to understand the detailed mechanisms of action of copper stress on individual virulence factors of Salmonella Typhimurium in vivo and to develop a more comprehensive understanding of the inactivation phenomenon and its implication in a suitable host.

The authors would like to thank Harold Michels for providing the funding support for the present study. 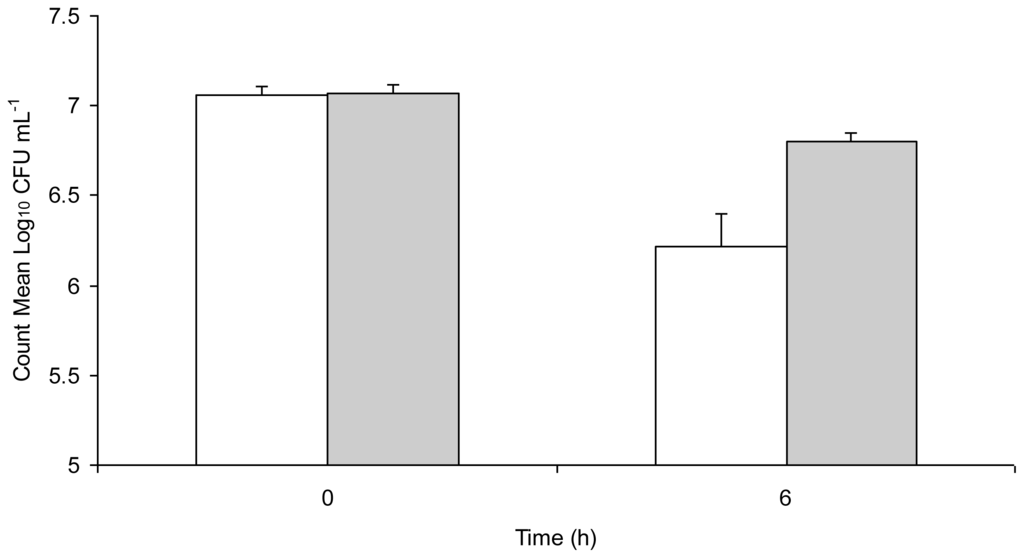 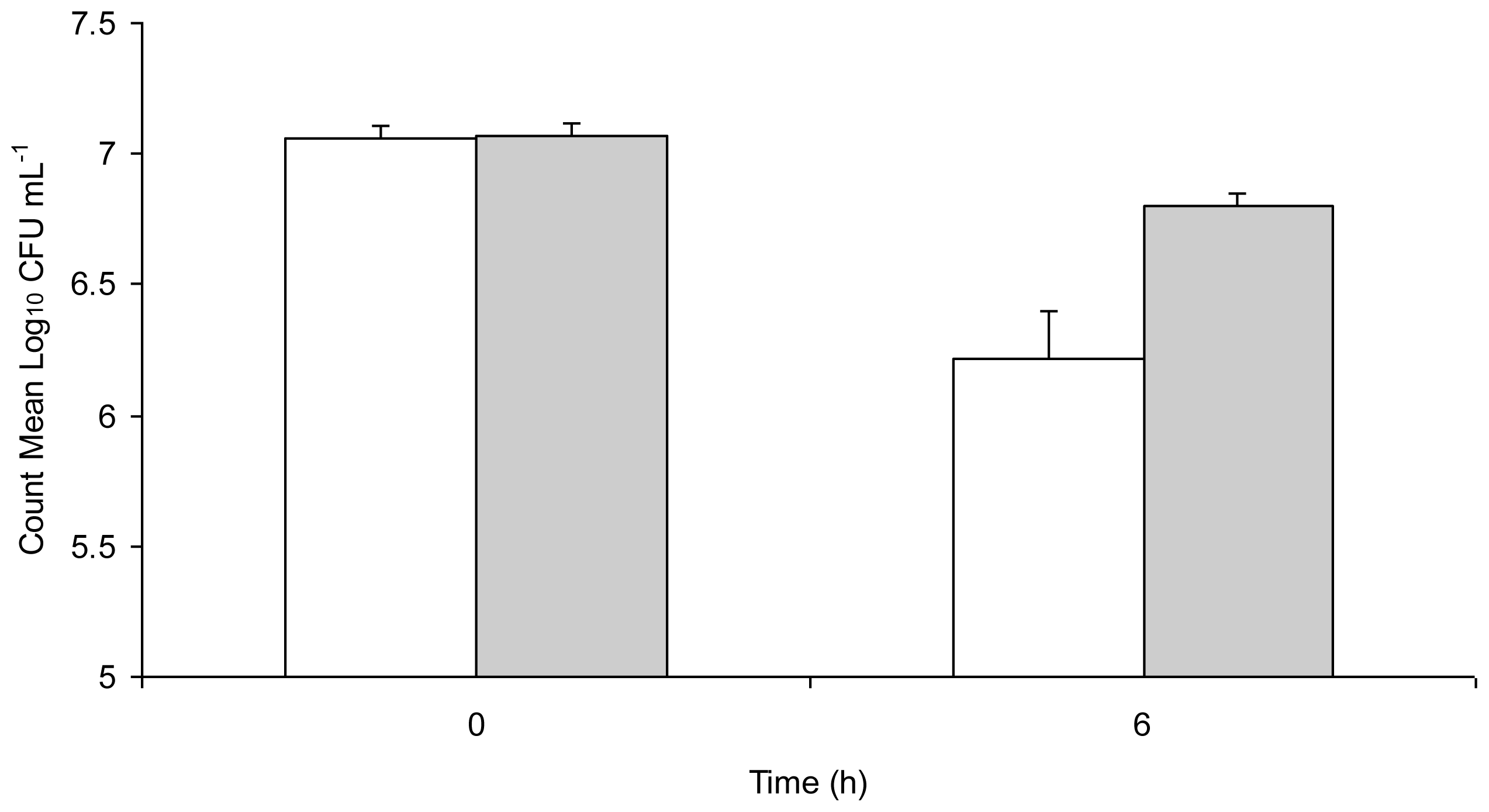 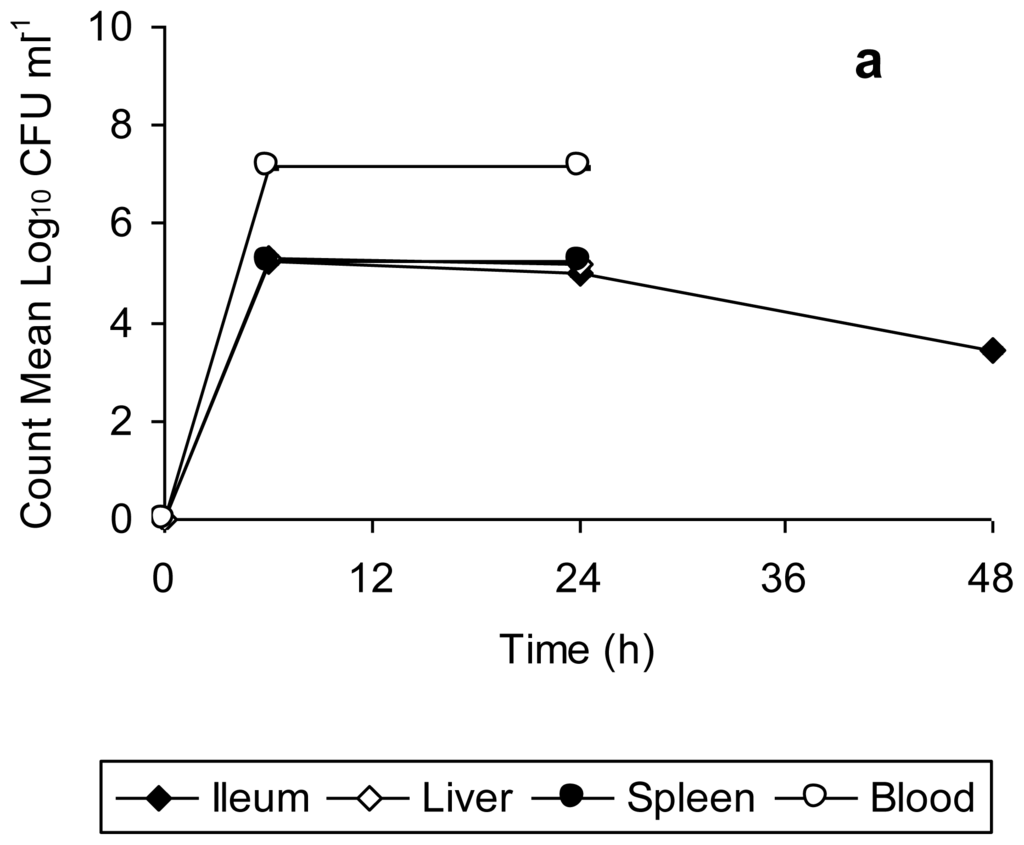 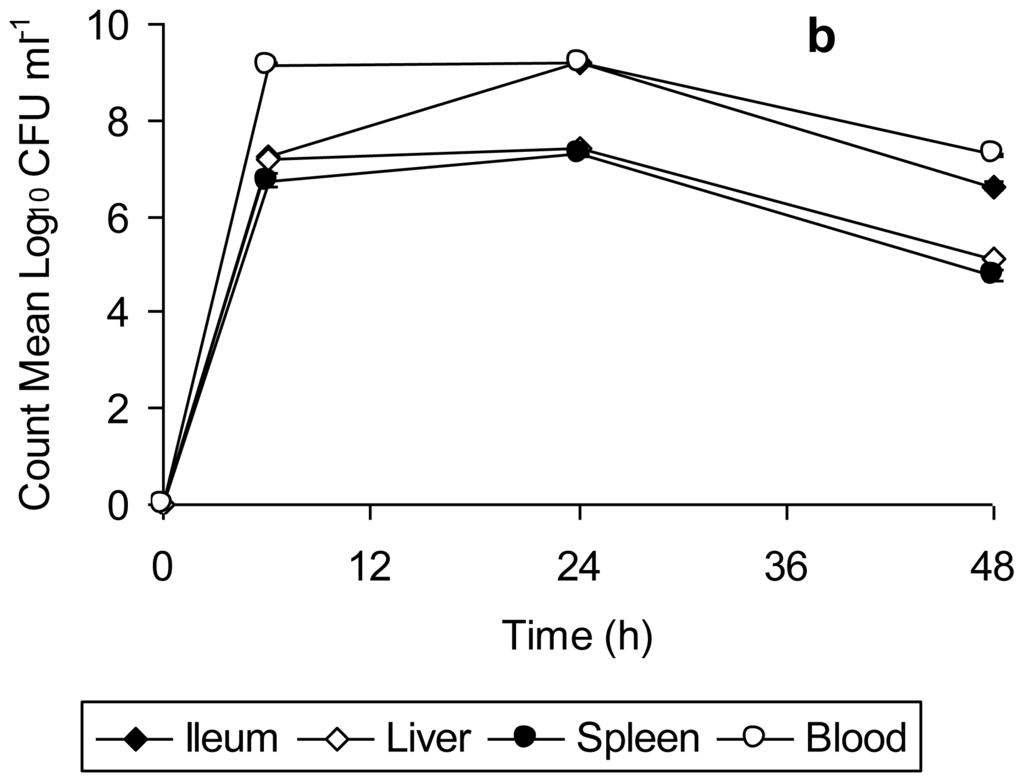 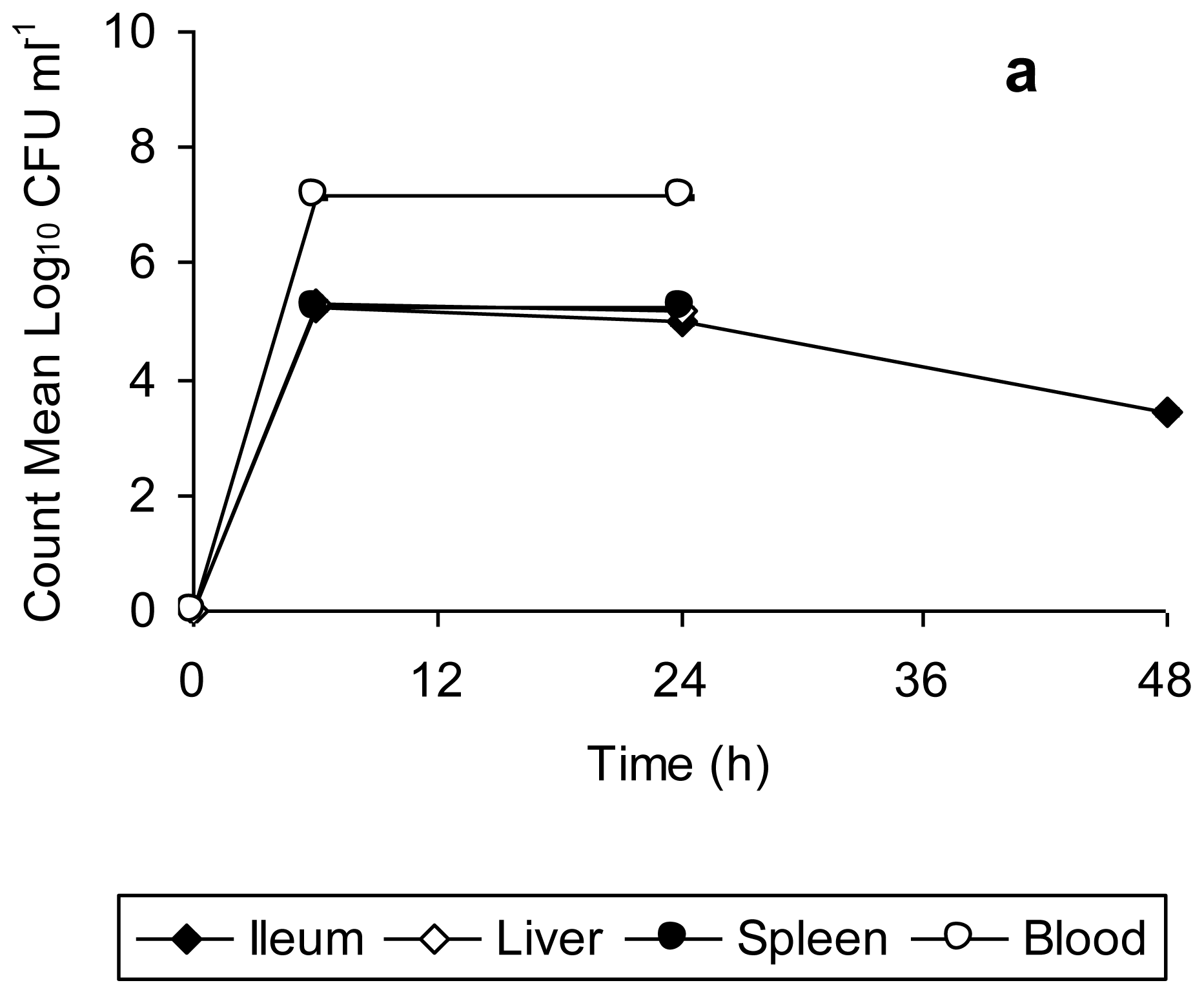 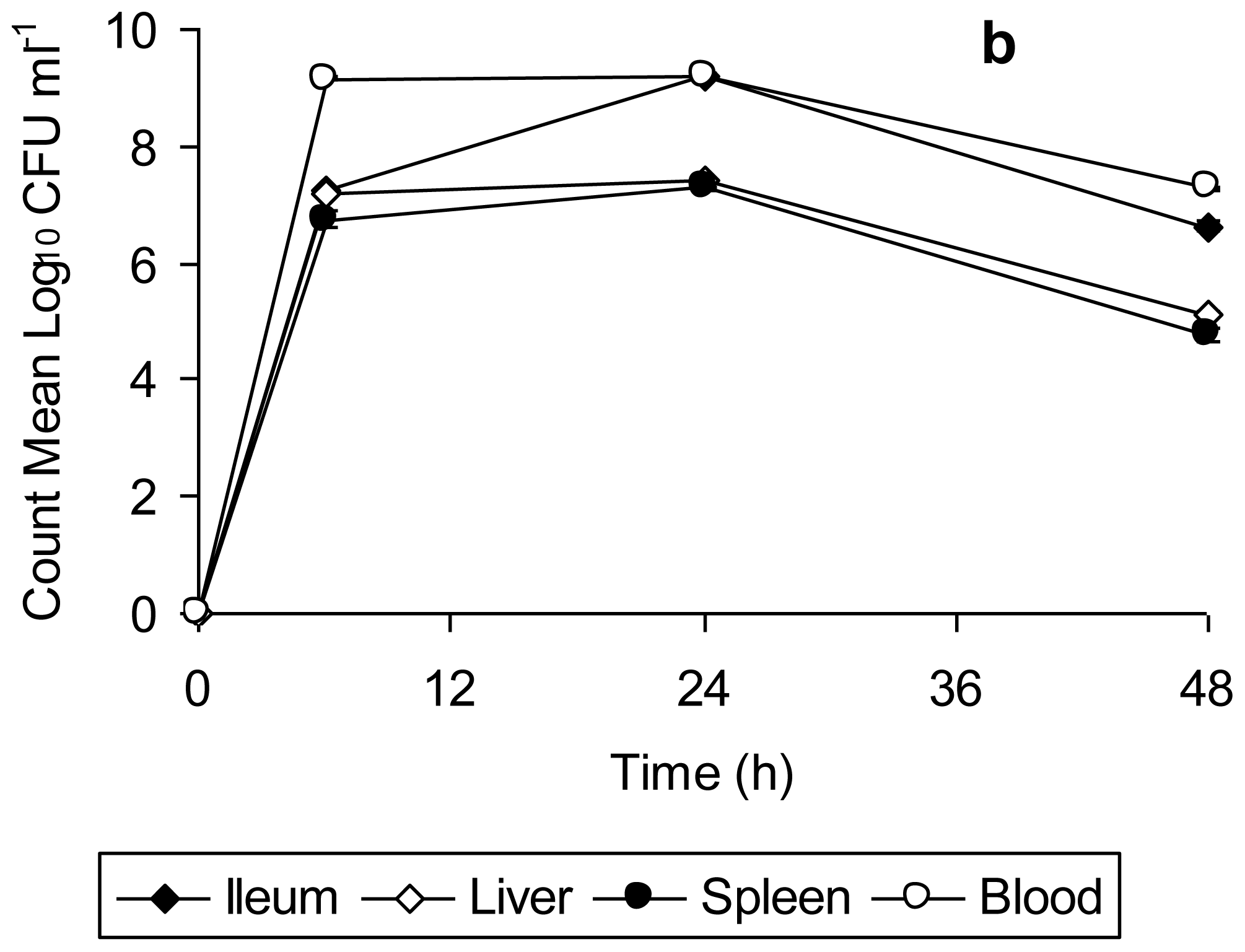 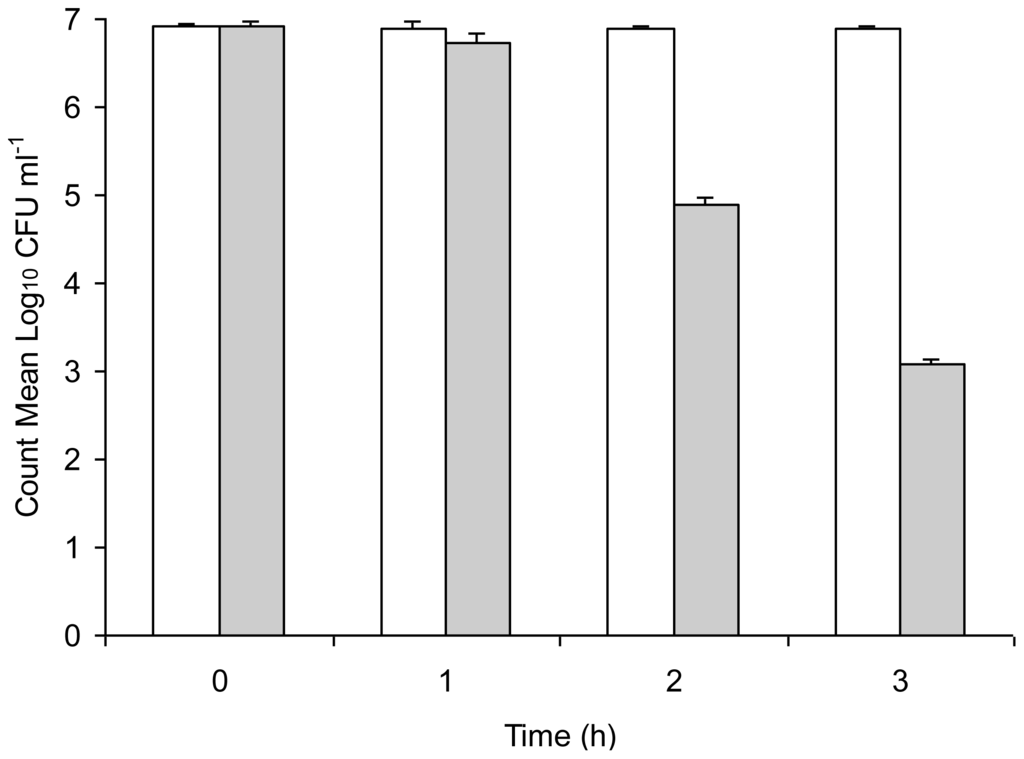 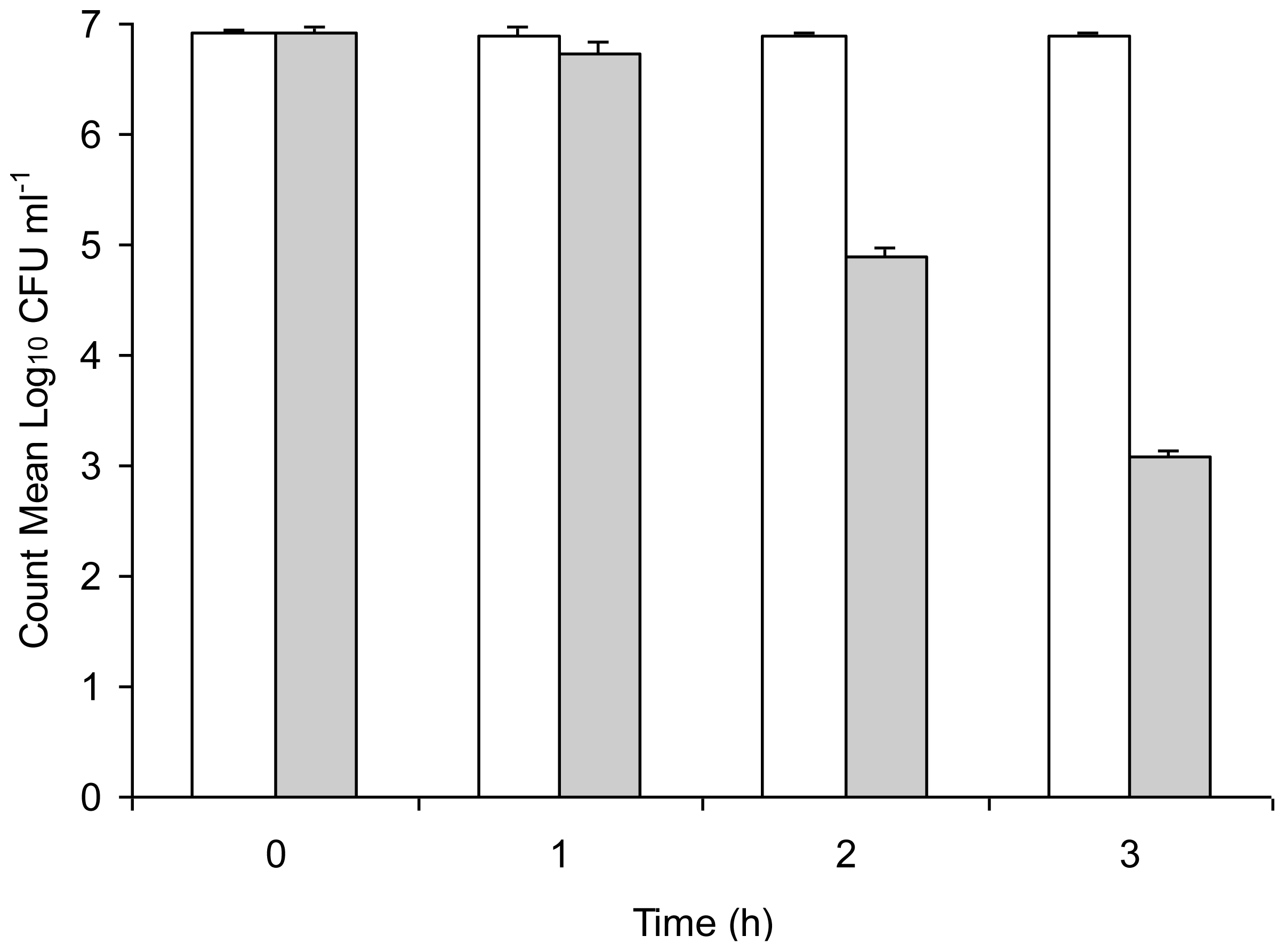 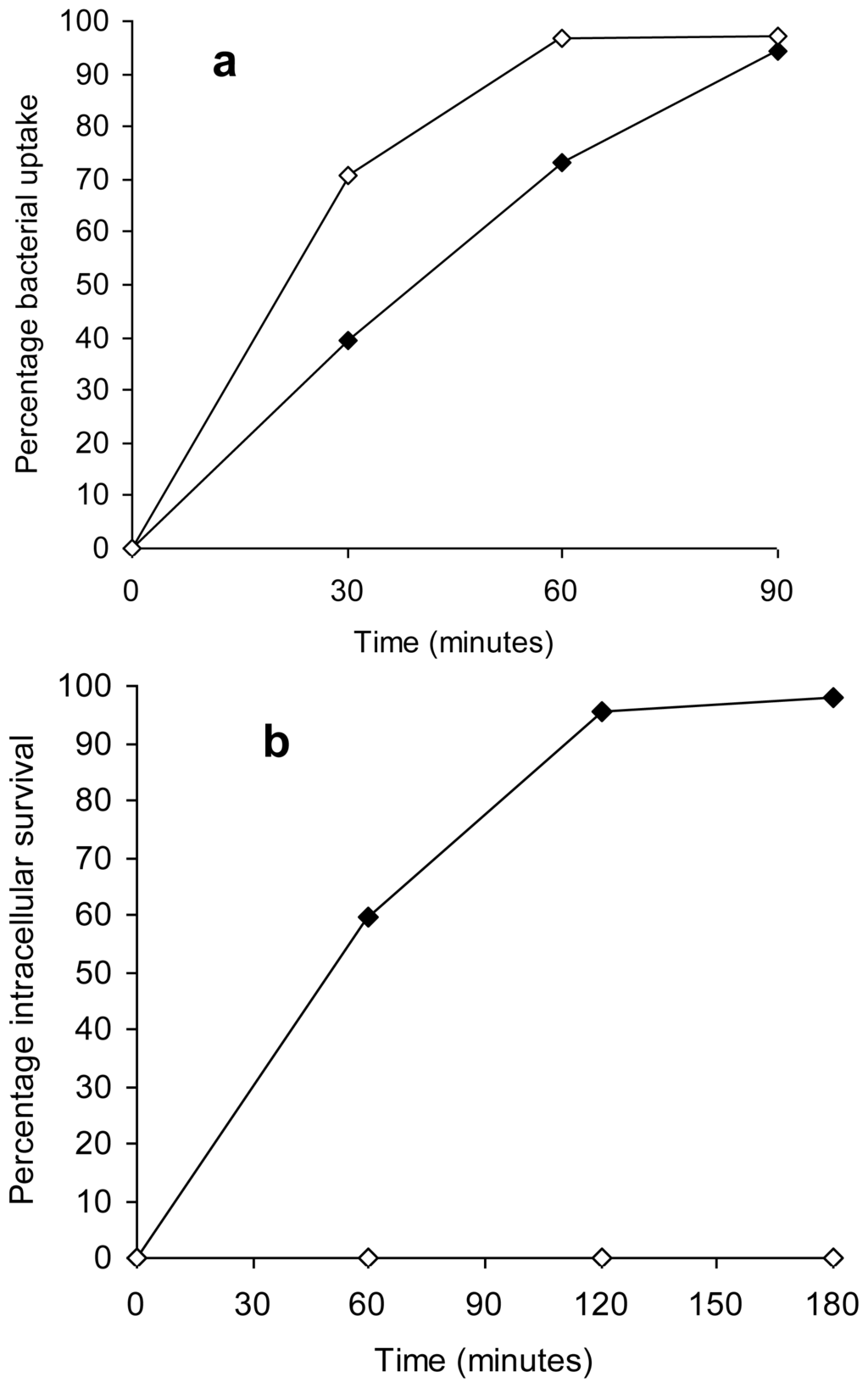 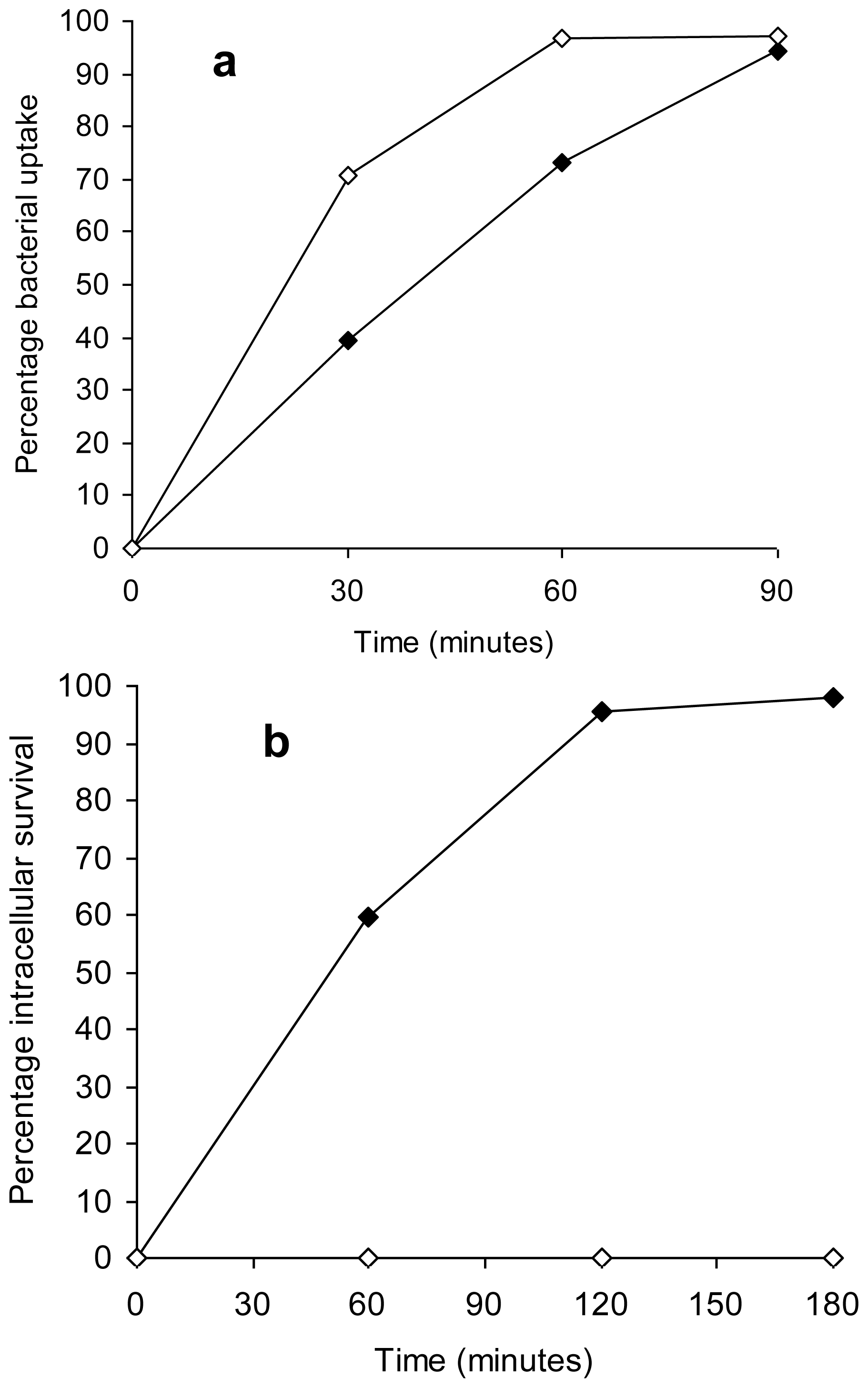 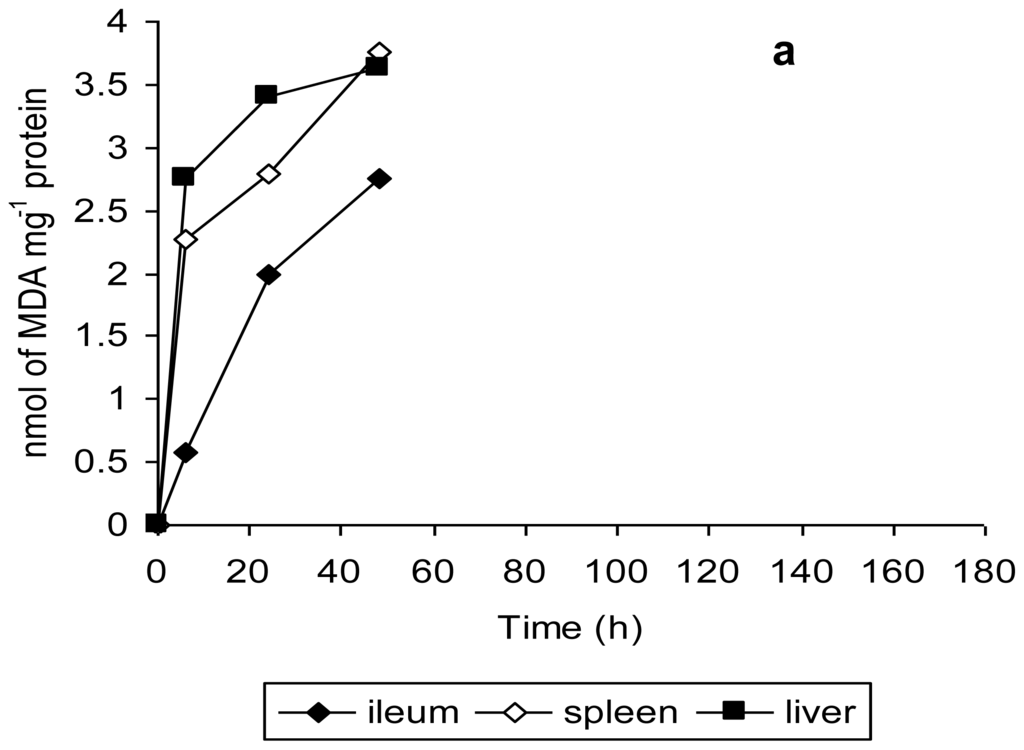 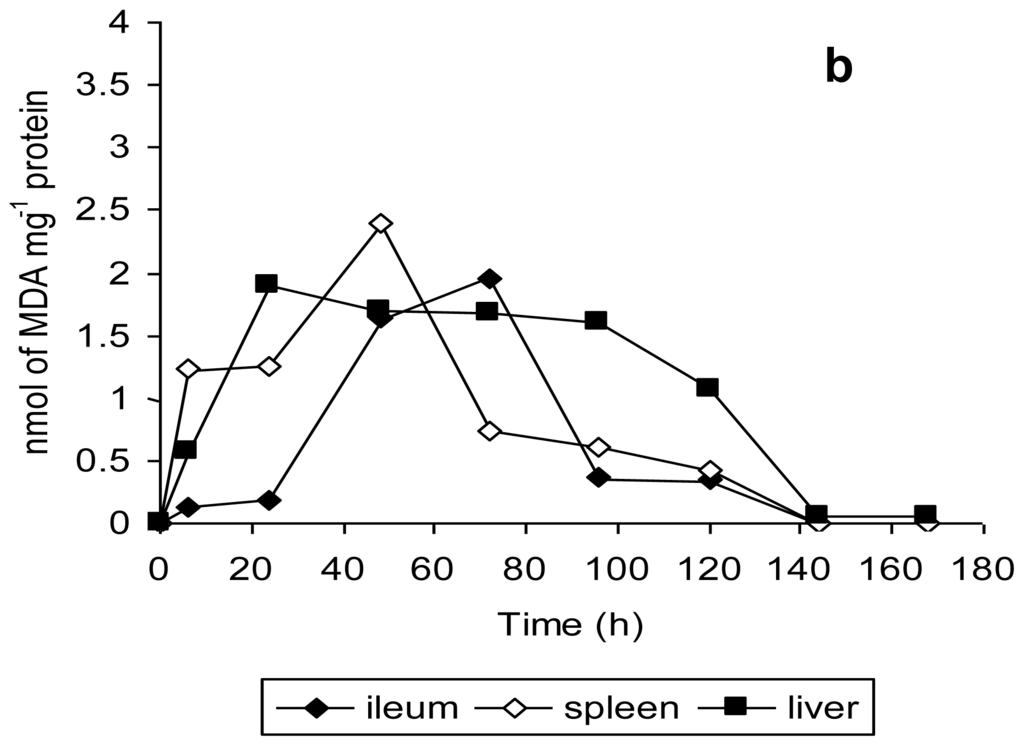 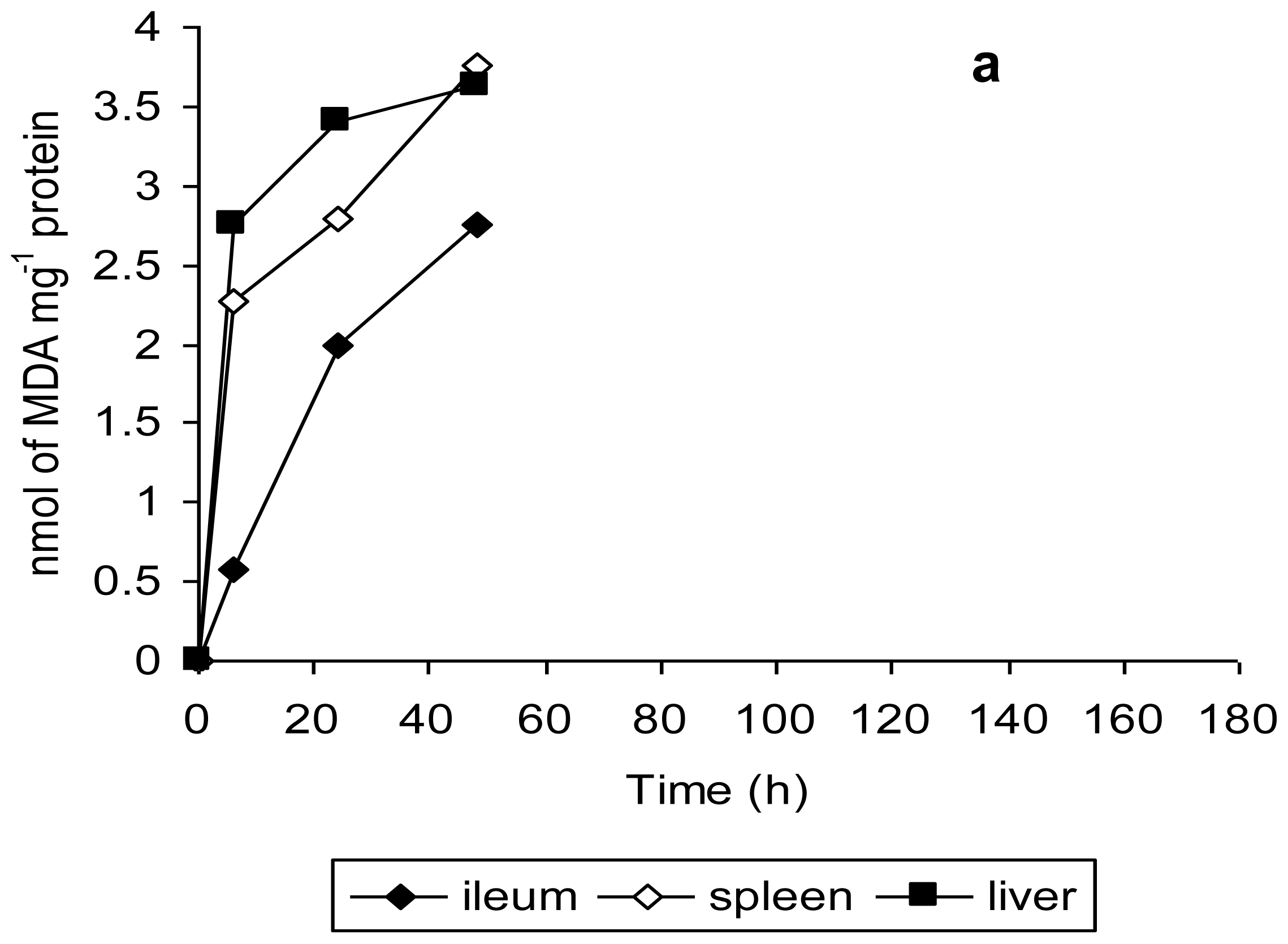 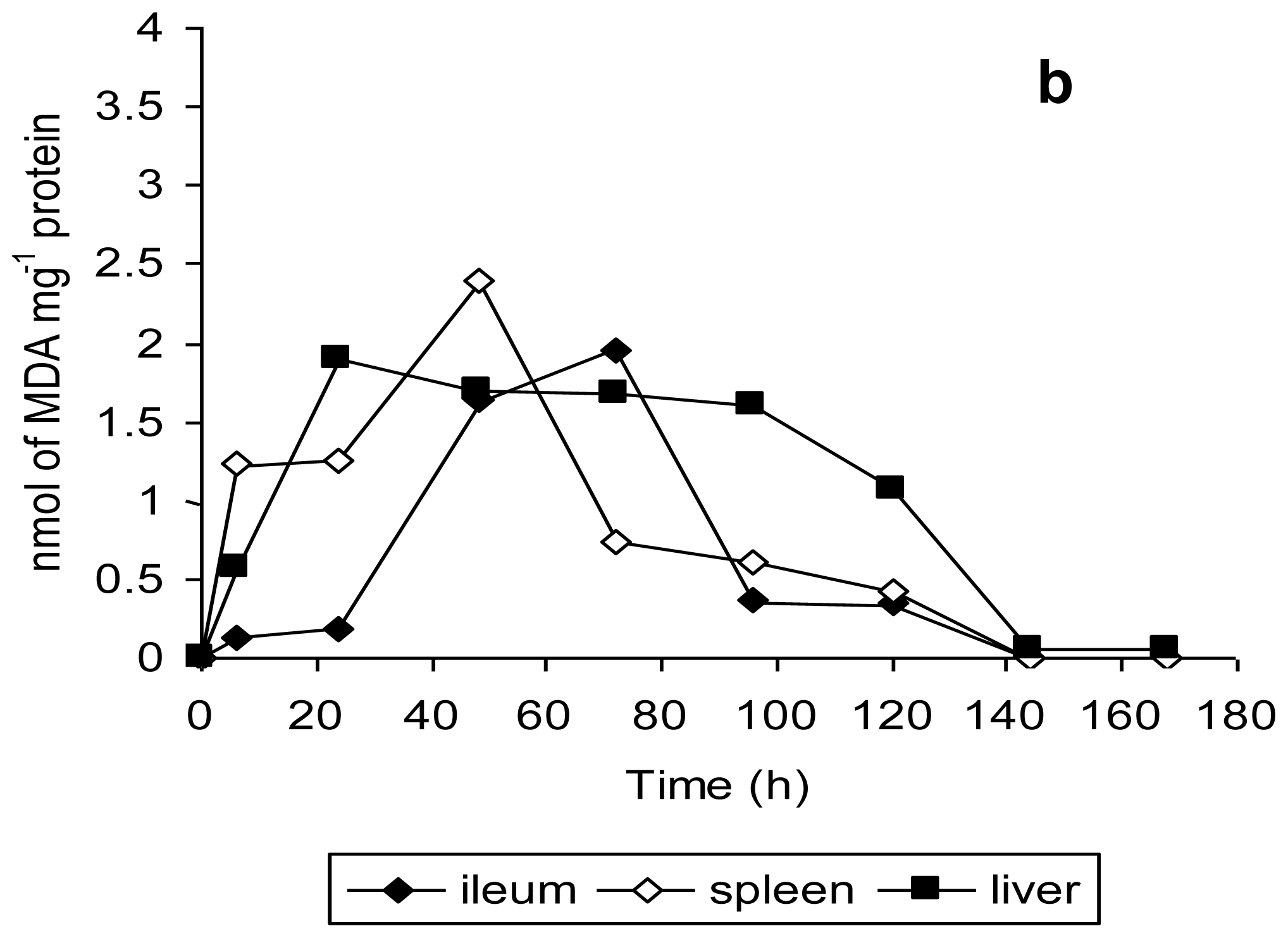 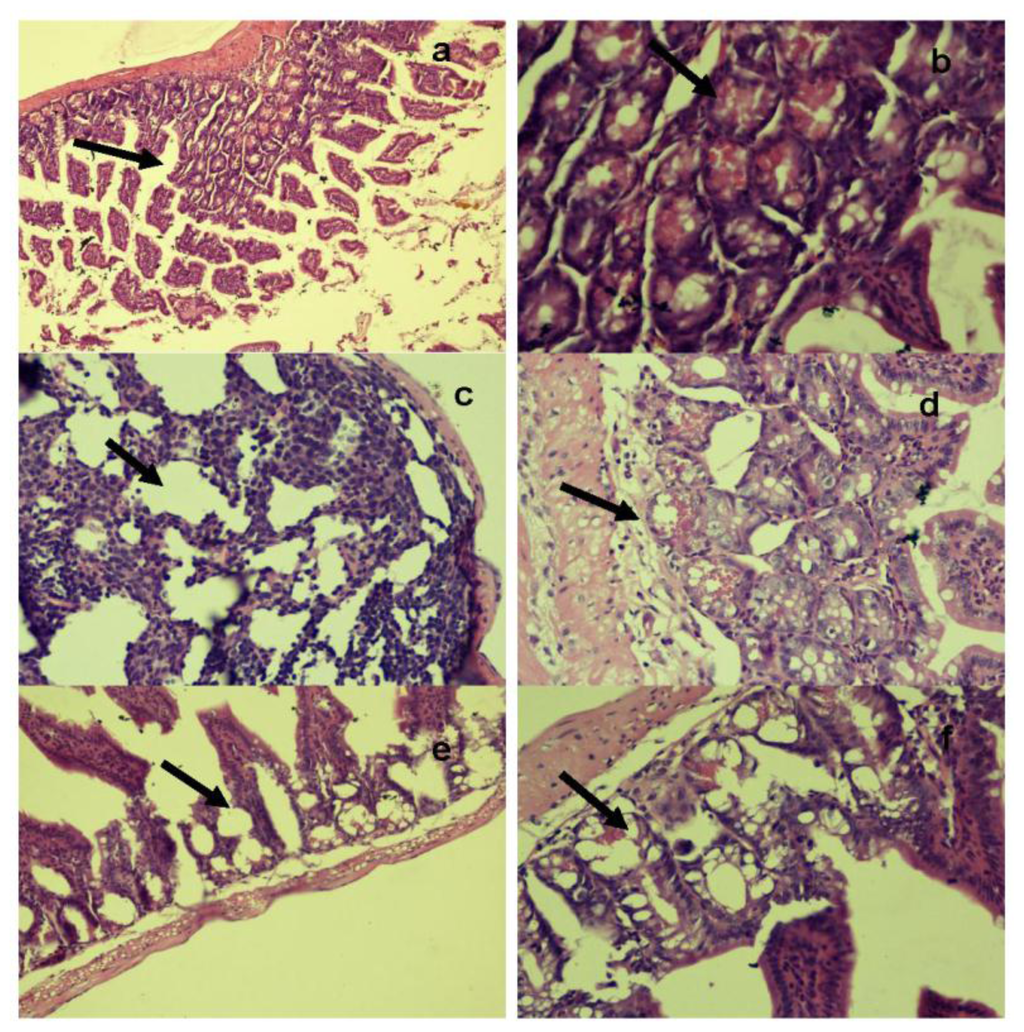 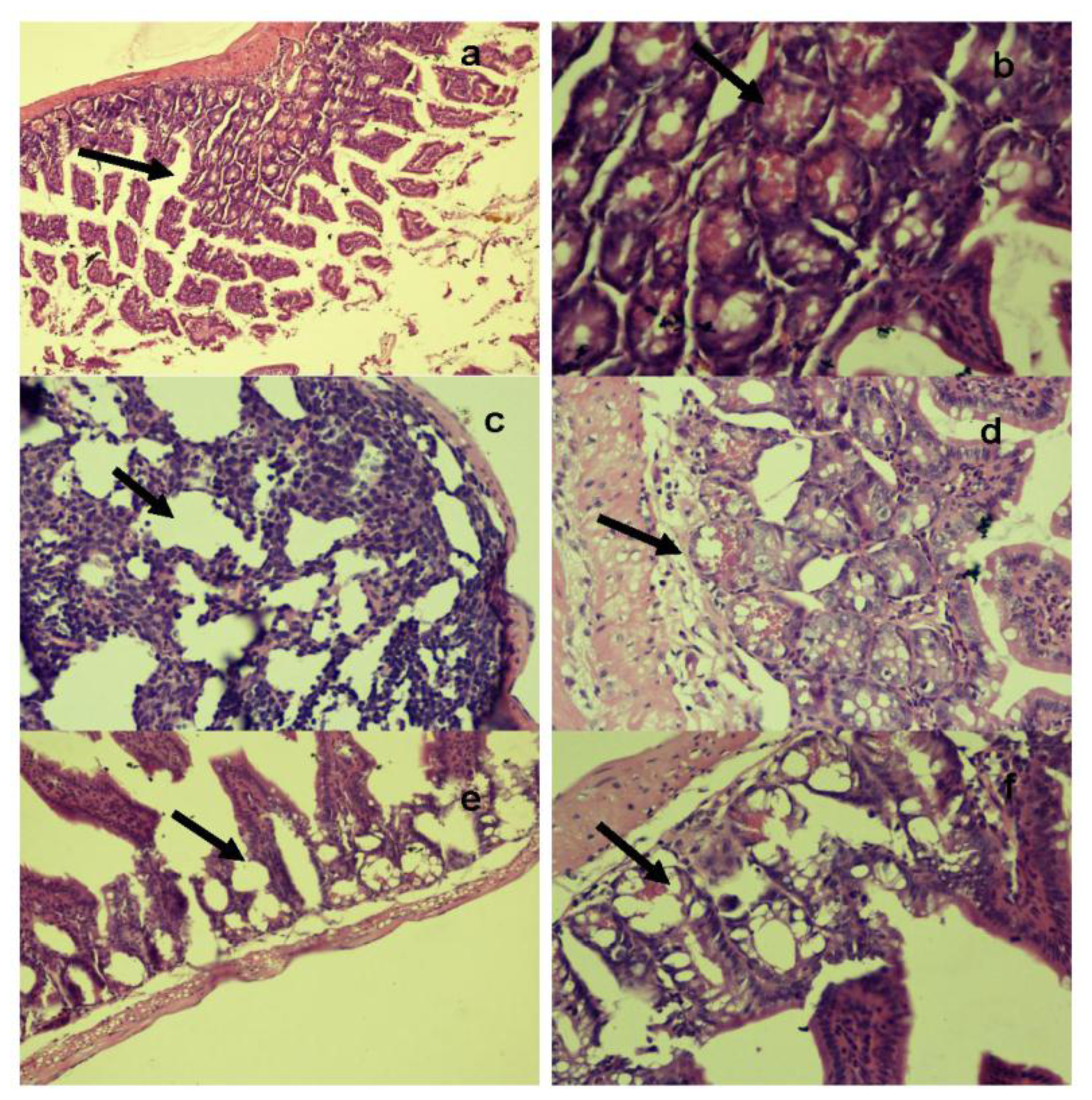 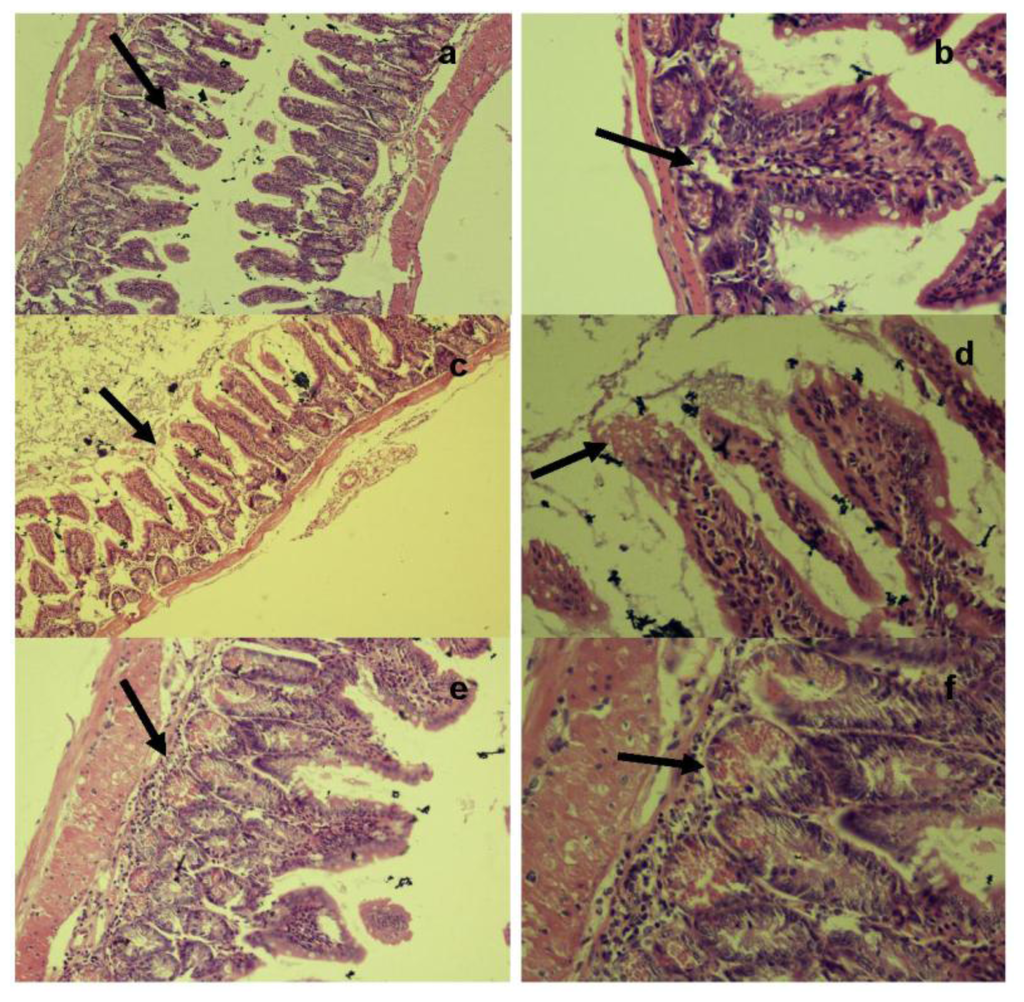 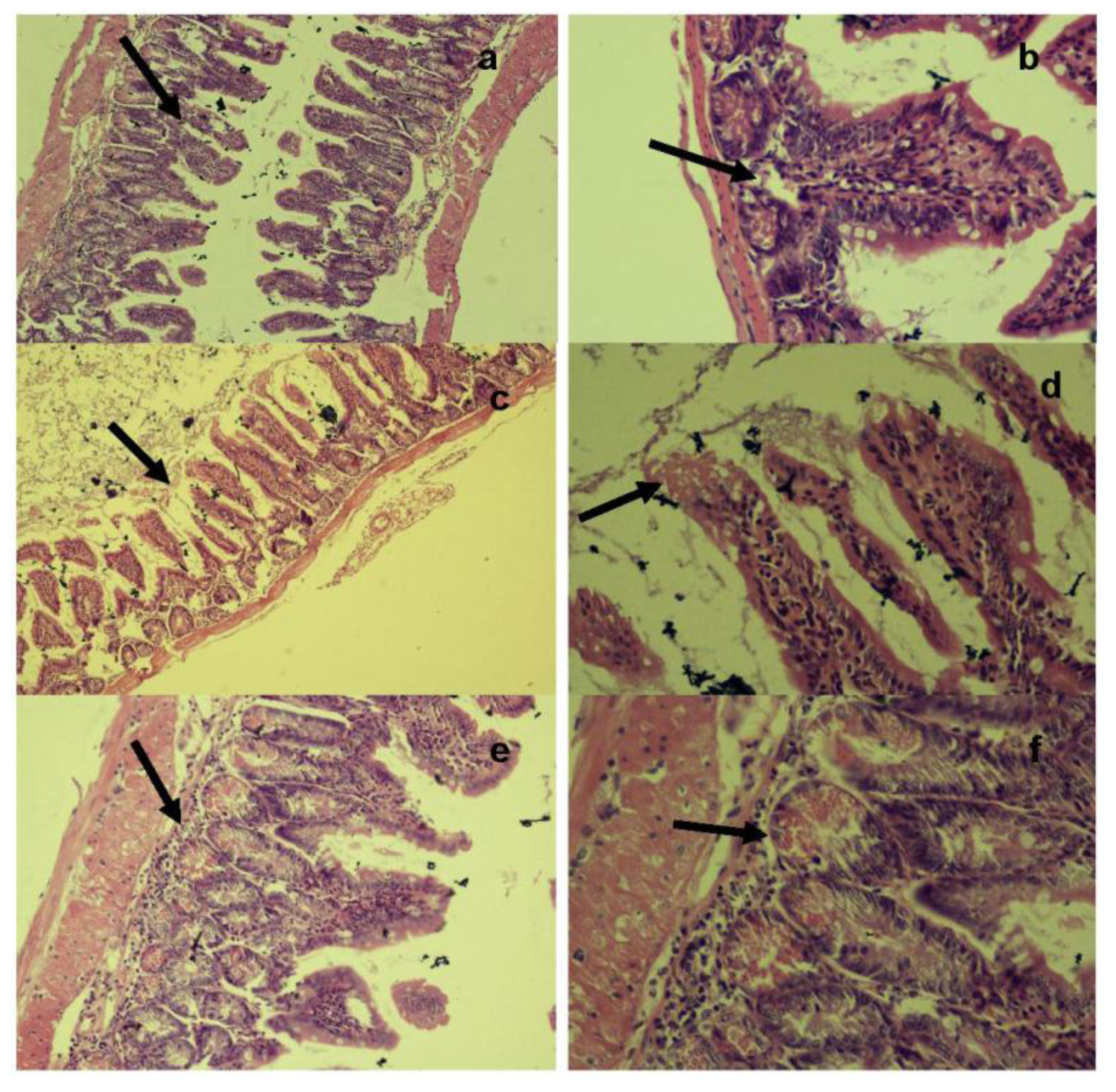