Noise and Quality of Life
Previous Article in Journal

Exploring the Relationship between Noise Sensitivity, Annoyance and Health-Related Quality of Life in a Sample of Adults Exposed to Environmental Noise

In developed nations, approximately half of household environments contain pets. Studies of Human-Animal Interaction (HAI) have proposed that there are health benefits and risks associated with pet ownership. However, accurately demonstrating and understanding these relationships first requires a better knowledge of factors associated with ownership of different pet types. A UK birth cohort, the Avon Longitudinal Study of Parents and Children (ALSPAC), were used to collect pet ownership data from the mothers, from gestation to child age 10 years old. 14,663 children were included in the study, of which mothers of 13,557 reported pet information at gestation, and 7,800 by age 10. Pet types recorded include cat, dog, rabbit, rodent, bird, fish and tortoise/turtle. The dataset also contains a number of demographic, socioeconomic and behavioural variables relevant to human health behaviour. Logistic regression was used to build multivariable models for ownership of each pet type at age 7 years. Family pet ownership increased during childhood, in particular rabbits, rodents and fish. A number of socioeconomic and demographic factors were associated with ownership of different pet types and the effects differed depending on the pet type studied. Variables which require consideration by researchers include gender, presence of older siblings, ethnicity, maternal and paternal education, maternal and paternal social class, maternal age, number of people in the household, house type, and concurrent ownership of other pets. Whether the mother had pets during her childhood was a strong predictor of pet ownership in all models. In HAI studies, care should be taken to control for confounding factors, and to treat each pet type individually. ALSPAC and other similar birth cohorts can be considered a potential resource for research into the effects of pet ownership during childhood. View Full-Text
Keywords: ALSPAC; pet; dog; cat; child ALSPAC; pet; dog; cat; child
►▼ Show Figures 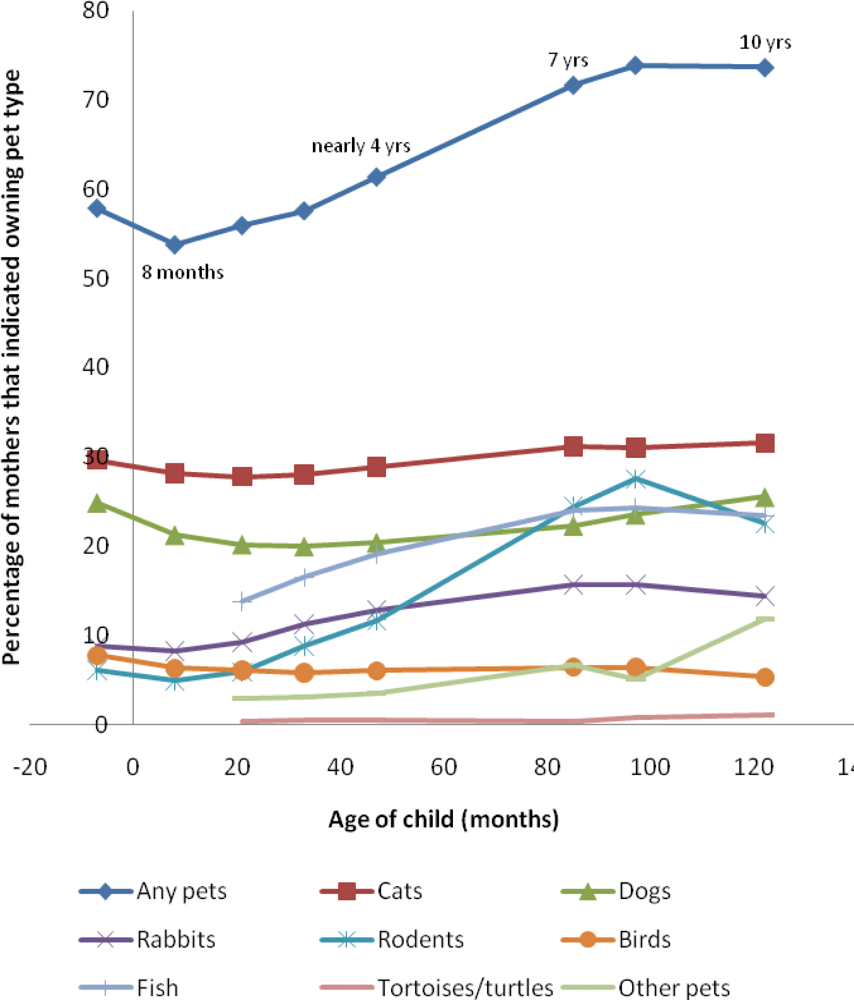