Polycyclic aromatic hydrocarbons (PAHs) are widespread genotoxic environmental pollutants and potentially pose a health risk to humans. Although the biological and toxicological activities, including metabolism, mutagenicity, and carcinogenicity, of PAHs have been thoroughly studied, their phototoxicity and photo-induced biological activity have not been well examined. We have long been interested in phototoxicity of PAHs and their derivatives induced by irradiation with UV light. In this paper we report the photoirradiation of a series of oxygenated benz[a]anthracene (BA) and 3-methylcholanthene (3-MC) by UVA light in the presence of a lipid, methyl linoleate. The studied PAHs include 2-hydroxy-BA (2-OH-BA), 3-hydroxy-BA (3-OH-BA), 5-hydroxymethyl-BA (5-CH2OH-BA), 7-hydroxymethyl-BA (7-CH2OH-BA), 12-hydroxymethyl-BA (12-CH2OH-BA), 7-hydroxymethyl-12-methyl-BA (7-CH2OH-12-MBA), 5-formyl-BA (5-CHO-BA), BA 5,6-cis-dihydrodiol (BA 5,6-cis-diol), 1-hydroxy-3- methylcholanthene (1-OH-3-MC), 1-keto-3-methylcholanthene (1-keto-3-MC), and 3-MC 1,2-diol. The results indicate that upon photoirradiation by UVA at 7 and 21 J/cm2, respectively all these compounds induced lipid peroxidation and exhibited a relationship between the dose of the light and the level of lipid peroxidation induced. To determine whether or not photoirradiation of these compounds by UVA light produces ROS, an ESR spin-trap technique was employed to provide direct evidence. Photoirradiation of 3-keto-3-MC by UVA (at 389 nm) in the presence of 2,2,6,6-tetramethylpiperidine (TEMP), a specific probe for singlet oxygen, resulted in the formation of TEMPO, indicating that singlet oxygen was generated. These overall results suggest that UVA photoirradiation of oxygenated BA and 3-methylcholanthrene generates singlet oxygen, one of the reactive oxygen species (ROS), which induce lipid peroxidation.

Polycyclic aromatic hydrocarbons (PAHs) are a class of carcinogenic environmental contaminants [1–3]. Since PAHs require metabolic activation in order to exert biological activities, including carcinogenicity [2], study of the mechanisms by which PAHs induce tumors in experimental animals has been one of the most extensively investigated areas of chemical carcinogenesis for the past several decades [1–3]. Three metabolic activation pathways in vivo have been determined, metabolism into bay-region diolepoxides [1], radical-cation intermediates [4], and ortho-quinones [5]. All these pathways result in binding of the ultimate metabolites with cellular DNA to form DNA adducts leading to cancer formation.

Following light irradiation, PAHs are also phototoxic [6], and are known to induce skin cancer in experimental animals [7–9]. PAHs also play an important role on human skin cancer since exposure of skin to terrestrial light is inevitable [10–13]. For example, it is known that coal tar topically applied on the skin followed by UV light irradiation for psoriasis treatment has an increased risk of developing cutaneous cancer [14]. Another example is that roofers and highway asphalt workers have a high risk to be exposed to both PAHs and light [15]. However, while people expose to the environmental PAHs on the skin are unavoidably exposed to sunlight, it is not known whether contact of PAHs with concomitant exposure to sunlight would result in any deleterious effects.

We have been interested in determining whether or not photoirradiation of environmental PAHs and their metabolites by UVA light in the presence of a lipid, methyl linoleate, can induce lipid peroxidation [16–21]. As a continuation of our research, in this study, we investigate the photoirradiation of a series of oxygenated benz[a]anthracene (BA) and 3-methylcholanthrene (3-MC) with UVA light in the presence of methyl linoleate. The structures and abbreviations of the compounds used in this study are given in Figure 1, which include 2-hydroxy-BA (2-OH-BA), 3-hydroxy-BA (3-OH-BA), 5-hydroxymethyl-BA (5-CH2OH-BA), 7-hydroxymethyl-BA (7-CH2OH-BA), 12-hydroxymethyl-BA (12-CH2OH-BA), 7-hydroxymethyl-12-methyl-BA (7-CH2OH-12-MBA), 5-formyl-BA (5-CHO-BA), BA 5,6-cis-dihydrodiol (BA 5,6-cis-diol), 1-hydroxy-3-methylcholanthene (1-OH-3-MC), 1-keto-3-methylcholanthene (1-keto-3-MC), and 3-methylcholanthene 1,2-cis-dihydrodiol (3-MC 1,2-cis-diol). It was found that all the photoirradiation resulted in lipid peroxide (methyl linoleate hydroperoxides) formation. For electron spin resonance (ESR) study, photoirradiation of 3-keto-3-MC by UVA (at 389 nm) in the presence of 2,2,6,6-tetramethylpiperidine (TEMP), a specific probe for singlet oxygen, resulted in the formation of TEMPO, indicating that singlet oxygen was generated.

The UVA light box was custom made with a 4-lamp unit using UVA lamps (National Biologics, Twinsburg, OH). The irradiance of light was determined using an Optronics OL754 Spectroradiometer (Optronics Laboratories, Orlando, FL), and the light dose was routinely measured using a Solar Light PMA-2110 UVA detector (Solar Light Inc., Philadelphia, PA). The maximum emission of the UVA is between 340–355 nm. The light intensities at wavelengths below 320 nm (UVB light) and above 400 nm (visible light) are about two orders of magnitude lower than the maximum at 340–355 nm.

Experiments were conducted with a solution of 100 mM methyl linoleate and 1.0 mM substrate in methanol. Samples were placed in a UV-transparent cuvette and irradiated with 0, 7, and 21 J/cm2 of UVA light. After irradiation, the methyl linoleate hydroperoxide products were separated by HPLC using a Prodigy 5 m ODS column (4.6 x 250 mm, Phenomenex, Torrance, CA) eluted isocratically with 10% water in methanol (v/v) at 1 mL/min. The extent of lipid peroxides formed by the photo-irradiation of methyl linoleate in the absence and presence of a substrate (Figure 1) was determined by calculating the amount of methyl linoleate-hydroperoxides detected in resolved HPLC peak areas detected at 235 nm as previously described [25–28].

Singlet oxygen generated from the photoirradiation of 1-keto-3-MC with UVA light was detected by the ERS spin trapping detection method using the spin trap TEMP as described by Rinalducci et al. [29]. 1-Keto-3-MC was dissolved in 80% acetonitrile in water. Two 50 μL quartz capillaries were used. The UVA light was provided by a Schoeffel 1000 W Xenon lamp coupled with a Schoeffel grating monochromator. The excitation light had a maximum centered at 389 nm. All experiments were performed in duplicate. The data were obtained with error of less than 10%.

Conventional ESR spectra were obtained with a Varian E-109 X-band spectrometer. ESR signals were recorded with 15 mW incident microwave and 100 kHz field modulation of 1G. The scan width was 100 G for TEMP experiments. All measurements were performed at room temperature.

In this study, there is no correlation between the level of lipid peroxidation induction and the tumorigenic potency of the parent PAHs. For example, while 7-CH2OH-12-MBA is carcinogenic [34], it induced lipid peroxidation less than 3-OH-BA which is not carcinogenic [34]. This finding is consistent with the results we previously reported on the UVA photoirradiation of PAHs and their derivatives [18–21].

The ESR spin trap study suggests that the photoinduced lipid peroxidation by PAHs is mediated by reactive oxygen species (ROS), specifically singlet oxygen, which is generated during the photoirradiation of PAHs. Lipid peroxidation produces aldehyde products that can bind covalently with cellular DNA, form DNA adducts, and induce tumors in experimental animals [27, 28]. Singlet oxygen itself can react with amino acid, proteins, lipids, and DNA resulting in cell damage and diseases [35], and can also damage DNA and proteins leading to aging, inflammation, cardiovascular diseases, cancer and other age-related diseases [36]. PAHs are potential environmental contaminants [1,34] and, as shown in our study, can induce lipid peroxidation. Since the majority of the PAHs and derivatives that we have studied can induce lipid peroxidation upon UVA light exposure, it is of particular importance and significance to investigate human health risks posed to the combination of PAHs and light.

Figure 1:. Structures of oxygenated benz[a]anthracene (BA) and 3-methylcholanthene (3-MC) used in this study.

Figure 1:. Structures of oxygenated benz[a]anthracene (BA) and 3-methylcholanthene (3-MC) used in this study. 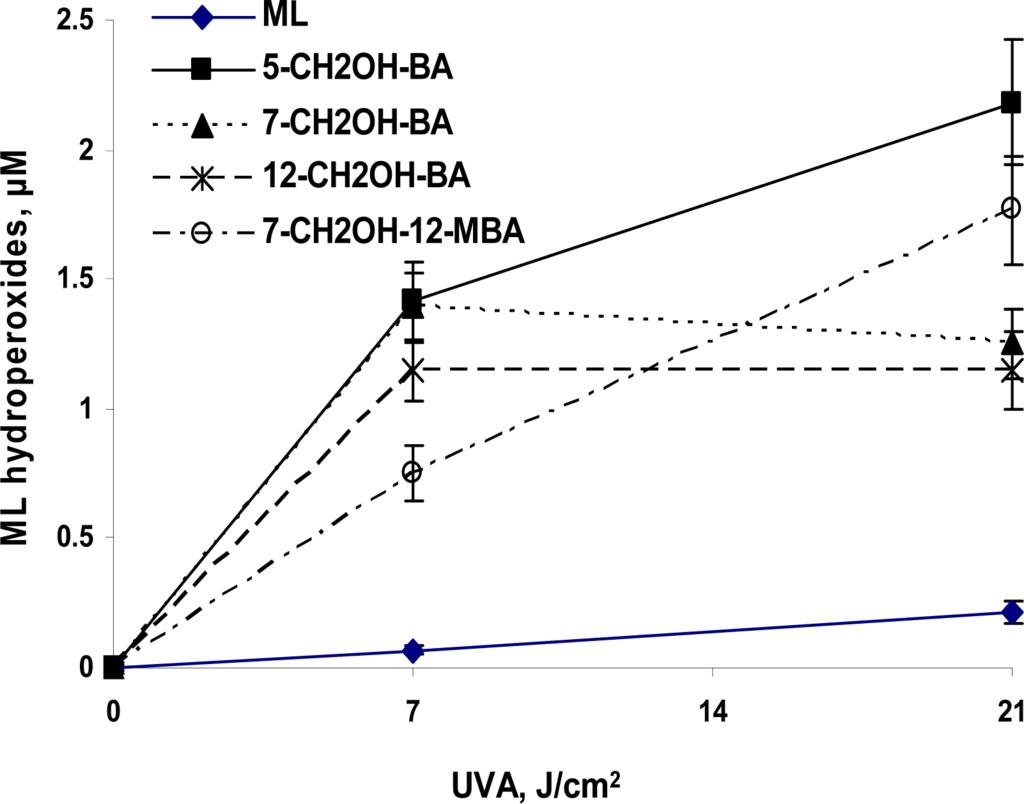 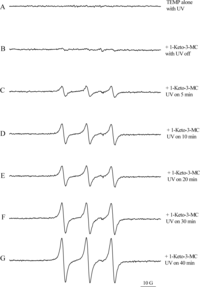 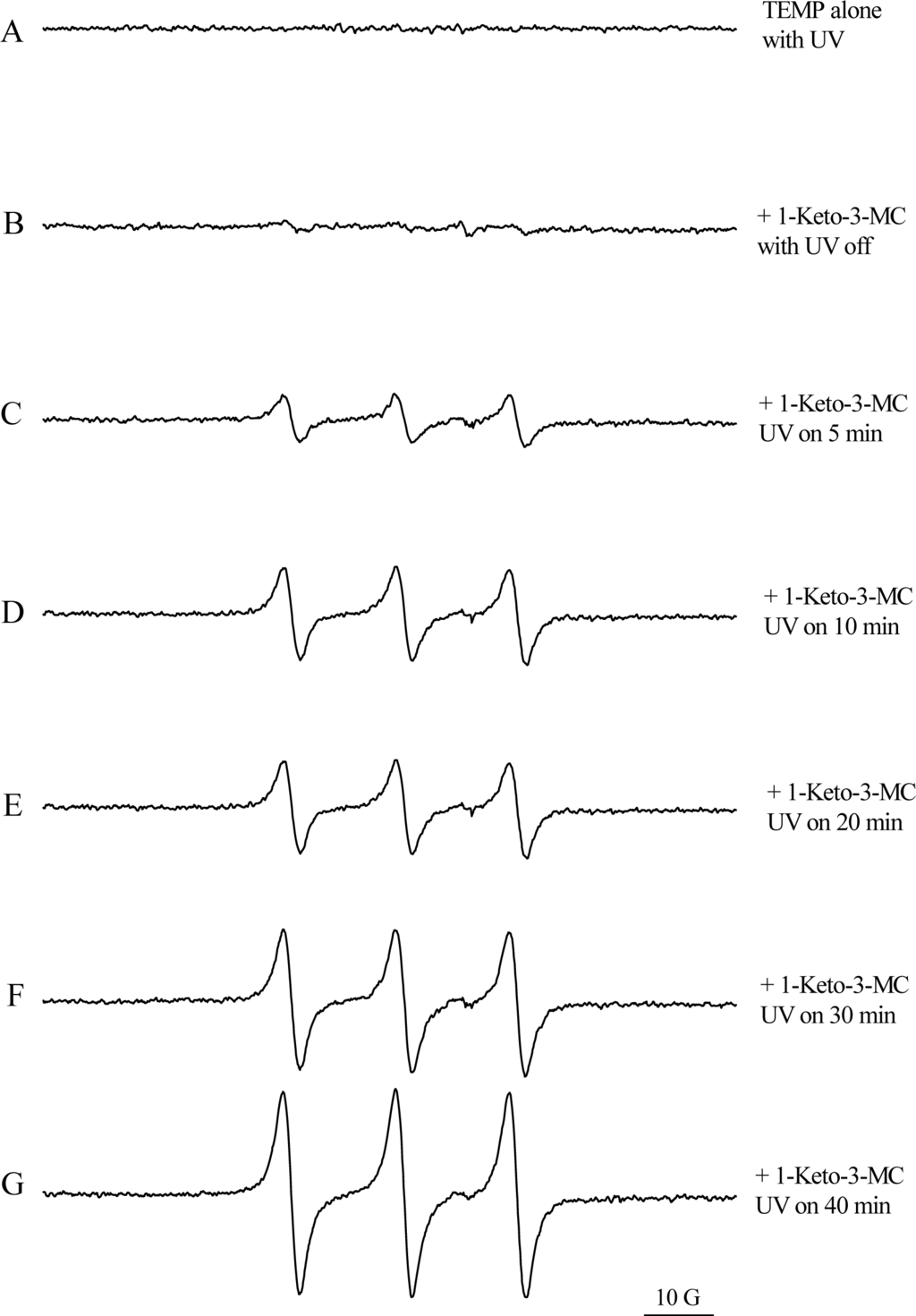 aData based on HPLC peak area of ML hydroperoxides measured at 235 nm.bAverage of two experiments/standard deviation