What Are the Characteristics of User Texts and Behaviors in Chinese Depression Posts?

Social media platforms provide unique insights into mental health issues, but a large number of related studies have focused on English text information. The purpose of this paper is to identify the posting content and posting behaviors of users with depression on Chinese social media. These clues may suggest signs of depression. We created two data sets consisting of 130 users with diagnosed depression and 320 other users that were randomly selected. By comparing and analyzing the two data sets, we can observe more closely how users reveal their signs of depression on Chinese social platforms. The results show that the distribution of some Chinese speech users with depression is significantly different from that of other users. Emotional sadness, fear and disgust are more common in the depression class. For personal pronouns, negative words and interrogative words, there are also great differences between the two data sets. Using topic modeling, we found that patients mainly discussed seven topics: negative emotion fluctuation, disease treatment and somatic responses, sleep disorders, sense of worthlessness, suicidal extreme behavior, seeking emotional support and interpersonal communication. The depression class post negative polarity posts much more frequently than other users. The frequency and characteristics of posts also reveal certain characteristics, such as sleep problems and reduced self-disclosure. In this study, we used Chinese microblog data to conduct a detailed analysis of the users showing depression signs, which helps to identify more patients with depression. At the same time, the study can provide a further theoretical basis for cross-cultural research of different language groups in the field of psychology. View Full-Text
Keywords: online social media; depression; natural language processing; text analysis online social media; depression; natural language processing; text analysis
►▼ Show Figures 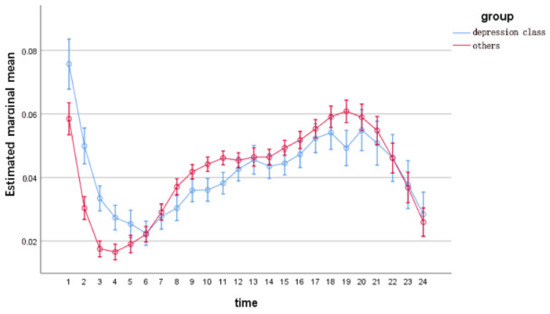