Influences of Climate Change and Variability on Estuarine Ecosystems: An Impact Study in Selected European, South American and Asian Countries

Miguel A. Pardal
4 and

It is well-known that climate change significantly impacts ecosystems (at the macro-level) and individual species (at the micro-level). Among the former, estuaries are the most vulnerable and affected ecosystems. However, despite the strong relations between climate change and estuaries, there is a gap in the literature regarding international studies across different regions investigating the impacts of climate change and variability on estuaries in different geographical zones. This paper addresses this need and reviews the impacts of climate change, variability and extreme weather on estuaries. It emphasises the following: (i) a set of climate parameters governing estuarine hydrology and processes; and (ii) a sample of countries in Asia (Bangladesh), Europe (Portugal) and South America (Uruguay). We reviewed the influences of the climatic drivers of the estuarine hydrology, ecological processes and specific species in estuarine communities across the selected geographical regions, along with an analysis of their long-term implications. The key results from the three estuaries are as following: (i) Hilsa fish, of which the catches contribute to 10% of the total earnings of the fishery sector (1% of GDP), are affected by climate-forced hydrological and productivity changes in the Meghna; (ii) extreme droughts and short-term severe precipitation have driven the long-term abundance and spatial distribution of both fish larvae and juveniles/adults in the Mondego; and (iii) the river inflow and fluctuations increases since the early 1970s have contributed to variations in the salinity, the stratification, the oxygen, nutrient and trophic levels and the spatial pattern for the life stages of planktonic species, fish biomass and captures in the Rio de la Plata. The results suggested that immediate action is needed to reduce the vulnerability of estuaries to climate stressors, mainly the changing river flows, storms and sea-level rise. As a contribution to addressing current problems, we described a set of adaptation strategies to foster climate resilience and adaptive capacity (e.g., early-warning systems, dam management to prevent overflows and adaptive fisheries management). The implications of this paper are two-fold. Firstly, it showcases a variety of problems that estuaries face from changing climate conditions. Secondly, the paper outlines the need for suitable adaptive management strategies to safeguard the integrity of such vital ecosystems. View Full-Text
Keywords: climate threats; species distribution; adaptation measures; estuaries climate threats; species distribution; adaptation measures; estuaries
►▼ Show Figures 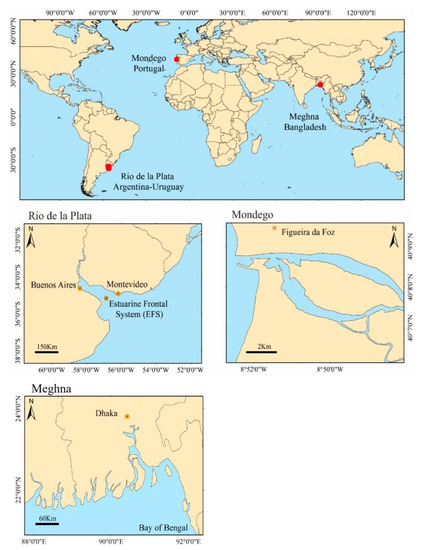