The Association of Bisphenol A and Phthalates with Risk of Breast Cancer: A Meta-Analysis
Previous Article in Journal

The links of air pollutants to health hazards have been revealed in literature and inflammation responses might play key roles in the processes of diseases. WBC count is one of the indexes of inflammation, however the l iterature reveals inconsistent opinions on the relationship between WBC counts and exposure to air pollutants. The goal of this population-based observational study was to examine the associations between multiple air pollutants and WBC counts. This study recruited community subjects from Kaohsiung city. WBC count, demographic and health hazard habit data were collected. Meanwhile, air pollutants data (SO2, NO2, CO, PM10, and O3) were also obtained. Both datasets were merged for statistical analysis. Single- and multiple-pollutants models were adopted for the analysis. A total of 10,140 adults (43.2% males; age range, 33~86 years old) were recruited. Effects of short-term ambient concentrations (within one week) of CO could increase counts of WBC, neutrophils, monocytes, and lymphocytes. However, SO2 could decrease counts of WBC, neutrophils, and monocytes. Gender, BMI, and smoking could also contribute to WBC count increases, though their effects are minor when compared to CO. Air pollutants, particularly SO2, NO2 and CO, may thus be related to alterations of WBC counts, and this would imply air pollution has an impact on human systematic inflammation. View Full-Text
Keywords: air pollutants; white blood cell count air pollutants; white blood cell count
►▼ Show Figures 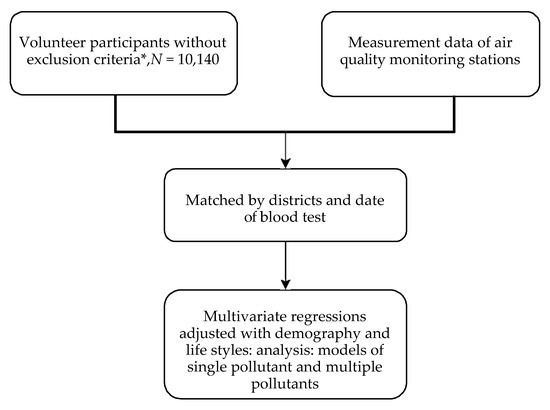