Parental Perceptions and Exposure to Advertising of Toddler Milk: A Pilot Study with Latino Parents

Influenza is a serious global public health burden, which causes substantial morbidity and mortality ranging from mild symptoms to fatal illness worldwide each year [1,2]. It is estimated that 291,000 to 645,000 deaths are attributable to influenza annually [3]. Adults over 65 years are disproportionately affected by influenza and account for approximately 90% of all influenza-associated deaths [4]. In 2018 alone, 109.5 million influenza virus episodes and up to 34,800 overall influenza-virus-associated acute lower respiratory infection deaths were estimated to have affected children under the age of five, worldwide [5]. Annual influenza vaccination is the primary means of preventing influenza and its complications [6,7] and is recommended by the World Health Organization [8] for those most at risk of serious illness or death from influenza. Approximately 10–20% of the global population is infected with influenza viruses annually, resulting in a considerable burden on the healthcare system [9]. The burden of influenza in primary care within England [1,10,11,12] and globally [13,14] is substantial. The National Health Service (NHS) England commissions the seasonal influenza immunisation programme in England to offer protection to patients in target groups at higher risk of severe disease following infection. This includes people in a clinical at-risk group, pregnant women, children, carers, and the elderly [15]. The policy for influenza vaccination coverage is set by Public Health England prior to commencement of each influenza season and generally ranges from 50% to 75% across age and risk groups. Although the annual influenza vaccination programme is free, the uptake of vaccination has most recently fallen 3–10% [16] short of uptake ambition. In the current context of the COVID-19 pandemic, increasing vaccine uptake to reduce the impact and burden of flu illnesses on healthcare systems is vital.
Vaccine hesitancy, defined by the World Health Organization (WHO) as a “delay in acceptance or refusal of vaccines, despite availability of vaccination services” [17], is increasingly becoming a global problem. Barriers to influenza vaccination include scepticism about effectiveness, fear of side effects, and misinformation. This is particularly evident amongst healthcare personnel [18,19,20].
One prevalent misconception is that influenza vaccinations can cause the flu [21,22,23]. In England, general practitioners (GPs) provide most healthcare. For these healthcare professionals, workload is increasing [24]. Patients with flu-like symptoms seek treatment from their GP in the first instance, occurring more frequently in midwinter, at a time when the impact of other respiratory tract infections is surging [1]. There is some evidence to suggest that where people have received an influenza vaccination, the rate of GP visits is lower [1], reducing the burden on Primary Health. This is important since the impact of increasing workload on GPs can lead to health issues such as burnout [25]. It is known that the rates of burnout in GPs in the United Kingdom are higher than those in other European countries, exacerbating a healthcare system under stress [26]. To our knowledge, however, there is only a small number of studies examining the correlation between the number of people vaccinated and the rate of GP consultations. Therefore, this study has been carried out to determine whether people undertaking influenza vaccination presented less with acute respiratory tract infection (ARTI) and influenza-like-illness (ILI) following vaccination.

All patients who received the influenza vaccination during influenza season between 1 September 2014 and 31 August 2019 were identified from the Oxford RCGP RSC database. We included in this analysis cases of influenza vaccination that occurred between 1st September and 30th April of 2014–2019, which correspond to the 2014/2015, 2015/2016, 2016/2017, 2017/2018, and 2018/2019 influenza seasons. For these cases, details of valency and route of vaccination, vaccine administration date, age, and sex were extracted. Prescription data and data entered as a clinical event were used to determine valency and route of administration.
In addition, we identified primary care consultations where the presenting complaint was either ARTI or ILI using our validated case definitions and associated SNOMED CT concept lists for each. These case definitions have been utilised in several previous studies monitoring incidence of ILI/ARTI within the sentinel network [28,29,30] and underpin weekly surveillance reporting by RCGP RSC and Public Health England [31]. Dates, types, and counts of these primary care consultations were extracted into the dataset for analysis.
General practices which did not meet quality measures, patients who had chosen to “opt out” of data sharing, people not registered as permanent patients with the same practice for the entire study period or those who had died within the study period were not included. Patients who had primary care consultation date identical to vaccination date, who recorded more than one dose of influenza vaccine within the same influenza season, or who did not record vaccine valency and route were excluded.

SCCS methodology was used to investigate the association between influenza vaccination and primary care consultations for respiratory infections. This case-only design yields within-person comparison, allowing each person to act as their own control [32]. The observation period of each subject is divided into risk periods, a defined time period after an exposure, and control periods, defined as time periods outside of the risk period [33,34].
Influenza vaccinations are cautioned in patients who are acutely unwell and should be postponed until the patient has fully recovered and returned to normal [35]. As it is extremely unlikely for ILI or ARTI consultation to take place immediately prior to vaccine administration, a pre-exposure risk period of 2 weeks was used. Risk period duration was determined based on existing literature on the protective effect of the influenza vaccination. A decrease in vaccine protection with increasing time since vaccination across influenza types has been observed [36]. Maximum protection has been shown 2–4 weeks after vaccination [37] followed by a significant decline around the 6-month period [36,38,39]. As such, three post-vaccination risk periods were defined [40,41].
Vaccination exposure periods, the dynamic period of interest relative to vaccination day (day 0), were defined a priori: pre-vaccination period as −1 to −14 days, post-vaccination risk period 1 as 0–14 days, risk period 2 as 15–90 days, and risk period 3 as 91–180 days (Supplementary Figure S1). Baseline period was determined by the UK influenza season, thus from 1 September to 30 April. The time period between influenza seasons, where people are not considered to be at risk of ILI or ARTI due to seasonal influenza, was defined as the washout period.
To assess seasonal effect, a 30-day rolling stratum was incorporated into the model from the 1st of October across the entire influenza season at 0–30, 31–60, 61–90, 91–120, 121–150, and 151–180 days.
We calculated the relative incidence (RI) of ARTI and ILI primary care consultations following vaccination for the different exposure periods and for the 30-day rolling stratum.
Unadjusted odds ratio (OR) was also calculated to assess the risk of respiratory consultation between live attenuated influenza vaccine (LAIV) and inactivated influenza vaccine (IIV) recipients.
All statistical analyses were performed using R Version: 3.5.3 (3 November 2019) (R Core Team (2017). F: A language and environment for statistical computing. R Foundation for Statistical Computing, Vienna, Austria. URL https://www.R-project.org/.) and SCCS package version 1.1.

A total of 1,410,764 individuals who received influenza vaccination during the influenza seasons of 2014 to 2019 were identified. Between them, they received 3,841,700 seasonal influenza vaccinations. There was a higher prevalence of females across all five years of the study period, accounting for 54.4% in the pooled data (n = 2,088,730). Baseline demographic characteristics are shown in Table 1.
The age–sex profile (Supplementary Figure S2) showed a peak at 2 years with proportionally higher vaccinations up to 10 years. An increase in female vaccination between 18 and 40 years and a distinct increase at 65 years and over were also observed. This reflects the national flu immunisation programme, which provides free vaccination for eligible groups including children, pregnant women, and people over the age of 65, respectively.

Main types of vaccines identified across 2014/2015–2017/2018 influenza seasons were trivalent (TRI) IIV, quadrivalent (QUAD) live attenuated influenza vaccine, and QUAD IIV (Table 2). In 2018/2019, TRI IIV count dropped (n = 1655) as the adjuvanted trivalent inactivated influenza vaccine (aTIV) accounted for 62% (n = 497,758). This reflects the introduction of this new vaccine, by the Joint Committee on Vaccination and Immunisation, to the UK national flu immunisation programme as the preferred vaccine for those aged 65 years and over.

Modelling showed a significant reduction in the fourteen days prior to vaccination for ARTI (combined RI = 0.81, 95% CI 0.77–0.84, p < 0.001) and ILI (combined RI = 0.76, 95% CI 0.66–0.88, p < 0.001), consistent with the healthy-vaccinee effect, across all five years. After vaccination, a significant increase in the RI of ARTI consultation rates (combined RI = 1.28, 95% CI 1.24–1.31, p < 0.001) within fourteen days was observed across all five years (Table 4). A similar pattern was observed for ILI consultations. Following this, RI dropped close to baseline in post-vaccination risk period 2 and was sustained for the remainder of the influenza season in post-vaccination risk period 3 (Figure 1).
A seasonal trend was observed in both groups of consultations (Figure 2). The RI of ARTI consultations gradually increased and peaked in December, with the exception of the 2018/2019 season, in which RI peaked in January. The RI of ILI consultations consistently peaked in January across all five years. This was most pronounced in 2017/2018, where ILI consultations were nearly thirteen times higher compared to baseline (RI = 13.96, 95% CI 11.01–17.7, p < 0.001).

The relative incidence of ARTI and ILI primary care consultations was elevated during the two-week period following influenza vaccination. Despite this, a large proportion of influenza vaccine recipients did not return to primary care with a presenting complaint of ARTI or ILI within 6 months of vaccination. These findings, if confirmed in other studies, might be a positive factor to help to reduce vaccine hesitancy and considered when educating and treating vaccine recipients, as well as informing vaccination policy. Reduction in consultations for ARTI and ILI may reduce the chance of cross-infection between patients. Further research is required to confirm our findings that influenza vaccination may reduce the consultation burden from acute reception on general practice and primary care.

The following are available online at https://www.mdpi.com/1660-4601/18/2/523/s1, Figure S1: Influenza season (1 September to 30 April) divided into baseline, pre-vaccination, and post-vaccination risk periods. Baseline extended from 1 September to 15 days pre-vaccination and from 180 days postvaccination to 30 April. Washout period (non-influenza season) extended from 1st May to 31st of August, Figure S2: Age-sex profile for seasonal influenza vaccine recipients in the Oxford RCGP RSC network between 2014/2015 to 2018/2019, Figure S3: Vaccine type by respiratory consultation (2-by-2 table). Table S1: Total number of reported ARTI and ILI events within influenza season between 2014/15 to 2018/19. Table S2: Total count of consultations by consultation type across all influenza seasons for 2014 to 2019. Table S3: Vaccination and respiratory consultations, stratified by age.

This study was approved by the Oxford RCGP RSC Study Approval Committee—reference RSC_CLIN_0320. Ethical review and approval by the Research Ethics Committee were waived for this study, as it was judged by the UK Research and Innovation decision tool [60], ‘Is my study research’, to be a service evaluation.

Patient consent was waived since pseudonymised data was used retrospectively. The Research Group is compliant with Article 6 of the EU General Data Protection Regulation 2016/679 (GDPR) in the use of personal data, and Article 9 in the use of special category sensitive data (such as health data).

Oxford-RCGP RSC data are available for independent scientific research. Applications for data access are made via www.rcgp.org.uk/rsc.

Thanks to the patients for allowing data sharing and practices of the Oxford RCGP RSC for agreeing to contribute pseudonymised data used for this work.

Simon de Lusignan is the Director of the RCGP RSC and has received funding through his University for studies from Eli Lilly, AstraZeneca, Sanofi, GSK, Seqirus, and Takeda; he has also been a member of advisory boards for influenza for Seqirus and Sanofi. These funders had no role in the design of the study; in the collection, analyses, or interpretation of data; in the writing of the manuscript, or in the decision to publish the results. 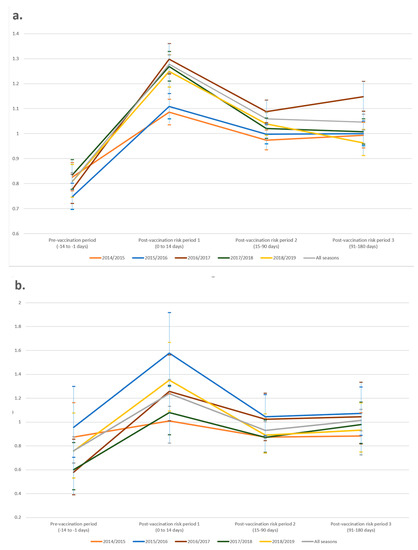 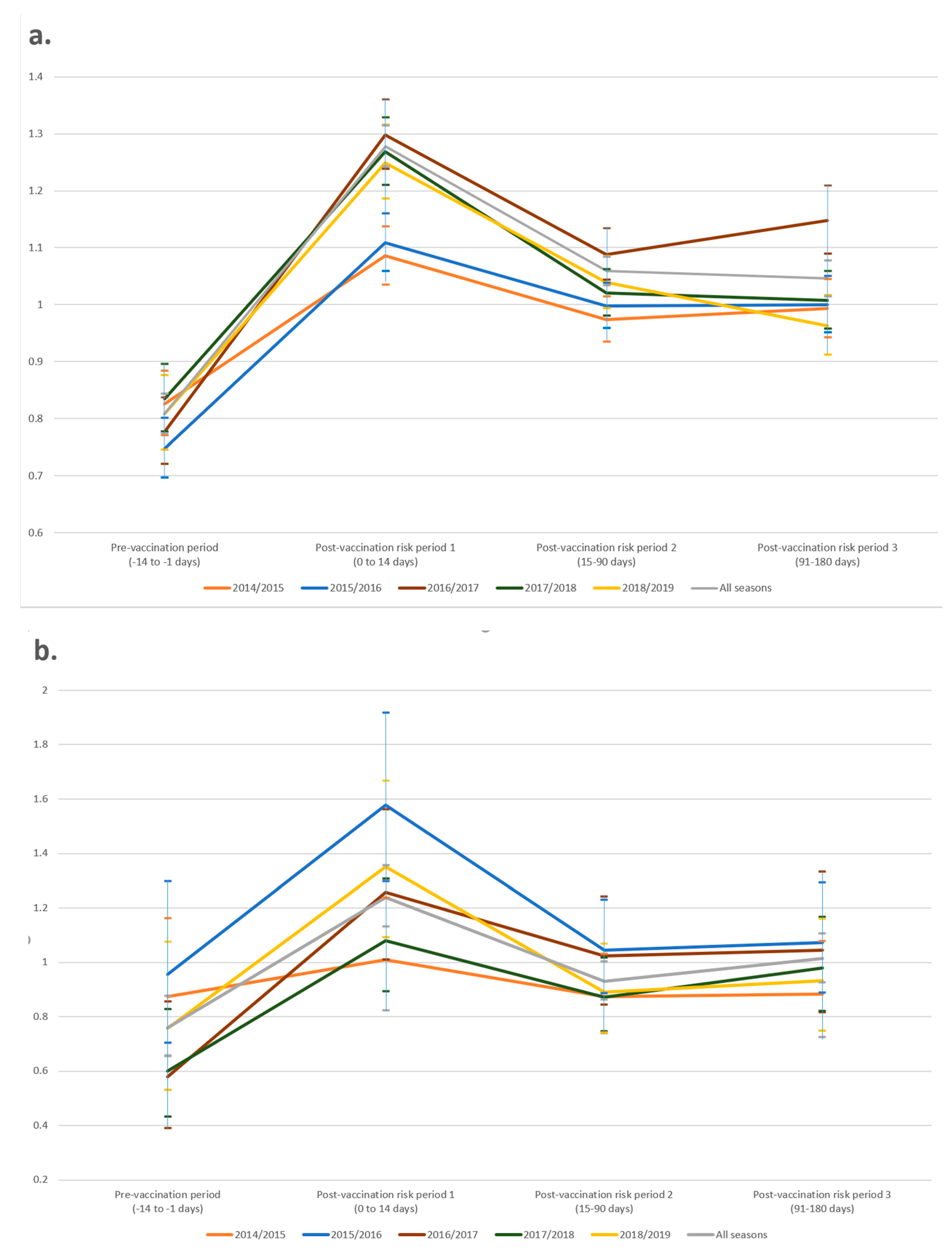 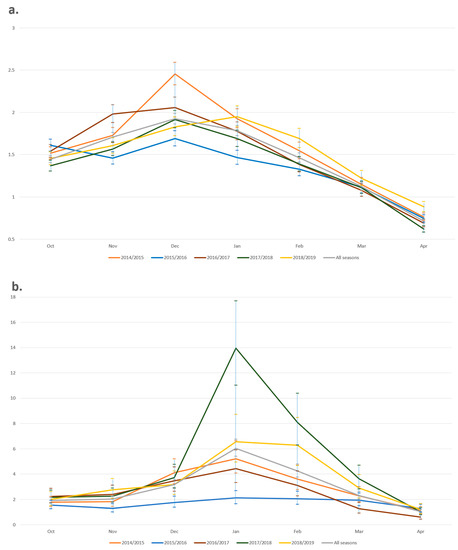 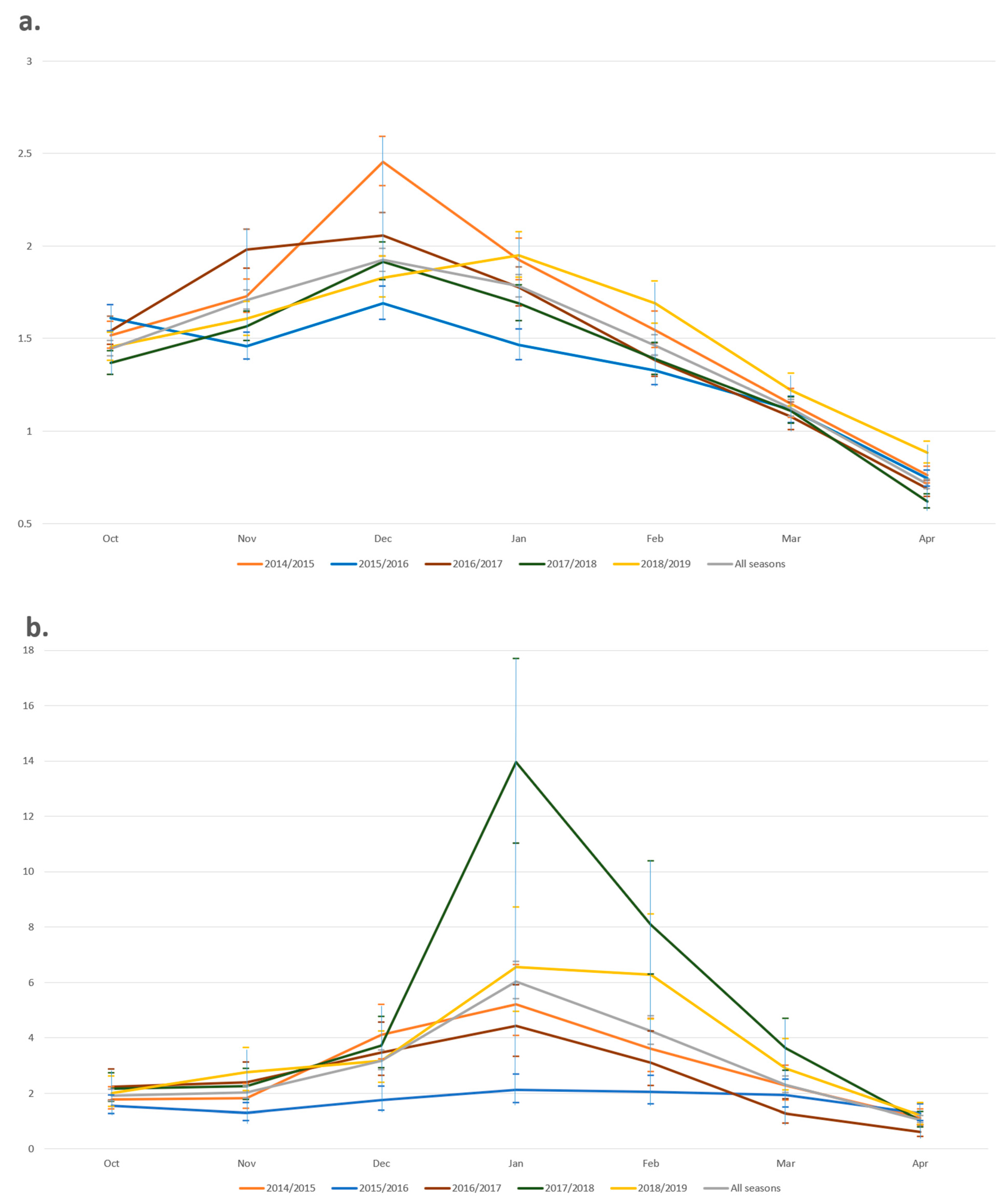