Cultural Considerations for the Adaptation of a Diabetes Self-Management Education Program in Cotonou, Benin: Lessons Learned from a Qualitative Study
Next Article in Special Issue

Identification of Network Promoters in a Regional and Intersectoral Health Promotion Network: A Qualitative Social Network Analysis in Southern Germany

Pickleball for Inactive Mid-Life and Older Adults in Rural Utah: A Feasibility Study

Many diseases, disabilities, and mental health conditions associated with aging can be delayed or prevented through regular exercise. Several barriers to exercise, many of which are exacerbated in rural communities, prevent mid-life and older adults from accessing its benefits. However, recently, a racquet sport named pickleball has become popular among older adults, and it appears to overcome some of these barriers. We conducted a feasibility study to evaluate the impact of a six-week pickleball intervention on measures of muscle function, cognitive function, perceived pain, and cardio-metabolic risk, as well as several psychosocial factors contributing to adherence in sedentary rural participants. Participants improved their vertical jump, cognitive performance, and reported a decrease in self-reported pain, suggesting improved physical and cognitive health across the sample. Participants also reported high levels of satisfaction and demonstrated good adherence over the duration of the study. Perhaps of greatest value was the overwhelmingly positive response from participants to the intervention and follow-up interviews reporting a desire to continue pickleball play beyond the study period. Overall, pickleball appears to be a promising intervention to, (1) elicit functional- and cognitive-related improvements, and (2) motivate mid-life and older adults to adhere to exercise sufficiently long to benefit their health. View Full-Text
Keywords: pickleball; older adults; mid-life adults; exercise adherence pickleball; older adults; mid-life adults; exercise adherence
►▼ Show Figures 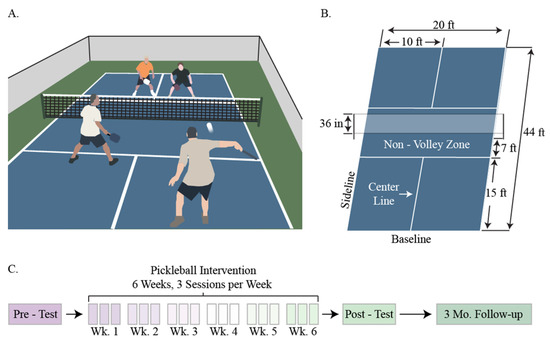