A Biomechanical Comparison of the Safety-Bar, High-Bar and Low-Bar Squat around the Sticking Region among Recreationally Resistance-Trained Men and Women
Next Article in Special Issue

Analysis of Incident Reports of a Dental University Hospital

:
Incident reports are important for improving the quality and safety of medical care. Healthcare workers with less than one year of work experience have been reported to cause the most incidents, and the most common incident is “drug-related”. However, few studies have comprehensively analyzed incidents in dentistry, and the characteristics of dental incidents have not been understood. In this study, to understand the characteristics of dental incidents, we comprehensively analyzed 1291 incident reports submitted to the Tokyo Medical and Dental University Dental Hospital from April 2014 to March 2019. As a result, dental outpatient and dental wards had different types of incidents. In outpatient wards, incidents included many dentistry-specific incidents related to “procedures”. Among them, “poor physical condition of the patient during dental treatment” was the most common incident. In contrast, the most common incident from subjects with less than one year of work experience was “damage to soft tissues around the teeth”. Thus, to improve the quality and safety in dentistry, it is was considered necessary to analyze and understand the characteristics of dentistry-specific incidents and to take appropriate measures and educate dental professionals.
Keywords:
dentistry; medical safety; incident reporting

In 1999, “To Err is Human” [1], reported by the US Institute of Medicine’s (IOM), revealed the current number of deaths due to medical errors and stated that this number can be reduced by taking appropriate measures. This has increased the world’s awareness of medical safety. Similarly due to multiple serious medical accidents in 1999 in Japan, social interest in medical safety has increased, and the country began to work on improving the quality of medical care. At each medical institution, the establishment of a system to prevent serious medical accidents was promoted. In 2004, the World Health Organization (WHO) launched the World Alliance for Patient Safety [2]. Reducing medical errors is now a major international concern.
In hospitals, incident reporting systems are used to collect information about incidents that have or are likely to affect patients, such as patient injuries, equipment failures, and near misses. Incident reports are important for improving the quality and safety of medical care. Incident reporting systems have been introduced in many Japanese hospitals [3,4]. To promote medical safety countermeasures in dentistry, it is necessary to collect and analyze incidents occurring in dental medical institutions. However, at present, few reports have comprehensively analyzed incidents in dentistry, and the characteristics of these dental incidents have not been understood. Therefore, current dental safety only depends on the experience of each dentist, and systematic dental safety education has not been established.
Healthcare professionals with less than one year of work experience tend to cause the most incidents, [5,6] with “drug-related” incidents being the most common [6,7,8]. However, whether there is a similar tendency in dentistry is uncertain. The purpose of this study is to analyze the characteristics of dental incidents. For that, in this study, we comprehensively analyzed incident reports submitted to our dental university hospital from the past five years, and assessed differences due to years of occupational experience.

We assessed 1291 incident reports submitted to the Dental Hospital, Tokyo Medical, and Dental University, from 2014 of Japanese fiscal year (hereafter, FY) to FY2019. Approximately 1600 to 1800 patients visit the dental hospital each day. All the incidents happened in the management area in the dental hospital. An existing incident collection system was used for data collection. In this system, hospital staff voluntarily describe incidents encountered in their working hours. Convenience sampling was employed; that is, all the data in the incident collection system were used for analysis, and any randomization was not conducted. The subject of this survey is completely anonymous, and there is no personally identifiable information. Therefore, the University Ethics Review Committee had stated that ethics review was not required.

The subjects were analyzed, focusing on the reporter, content, location, cause, and degree of impact to the patient. In this study, “incidents” were defined as the occurrence of actions or situations that deviate from normal during dental treatment. This includes incidents with and without injury to the patient, and those with and without the negligence of the dental healthcare workers.

2.2.1. Classification by Occupation and Department of Reporter

2.2.2. Classification by the Work Experience

2.2.3. Classification by the Contents of the Incidents

2.2.4. Classification by the Causes of the Incidents

Based on the classification by Watanabe et al. [9], the subjects were classified according to the cause of incidents into the following eight groups: “confirmation” (lack of confirmation, lack of observation, etc.), “knowledge/experience” (lack of knowledge, lack of technology, unfamiliarity with instruments, etc.), “cognition” (belief, forgetfulness, etc.), “cooperation/information transmission” (insufficient explanation, communication, etc.), “working status” (I was in a hurry, etc.), “judgment” (inappropriate judgment, etc.), “patient” (patient and family factors), and “other” (impossible, depending on medical equipment).

We comprehensively analyzed 5-year incident reports submitted to our dental university hospital. Dental outpatient and dental wards had different types of incidents. There were many “drug-related” incidents reports in the dental ward; conversely, in the dental outpatient department, incident reports in dentistry included many dentistry-specific incidents related to “procedures” such as “poor physical condition of the patient during dental treatment”. Most dental incident reporters had less than one year of work experience. The tendency of incidents to occur differed depending on the years of work experience. It was considered necessary to educate dentists with less than one year of work experience on incident examples and recurrence prevention measures.

This research was supported by JSPS Grant-in-Aid for Scientific Research (20K18825).

This research was funded by JSPS Grant-in-Aid for Scientific Research grant number 20K18825.

The data presented in this study are available from the corresponding author, Y.K., upon reasonable request.

The authors thank all the members of the Medical Safety Management Office in Dental hospital at Tokyo Medical and Dental University. 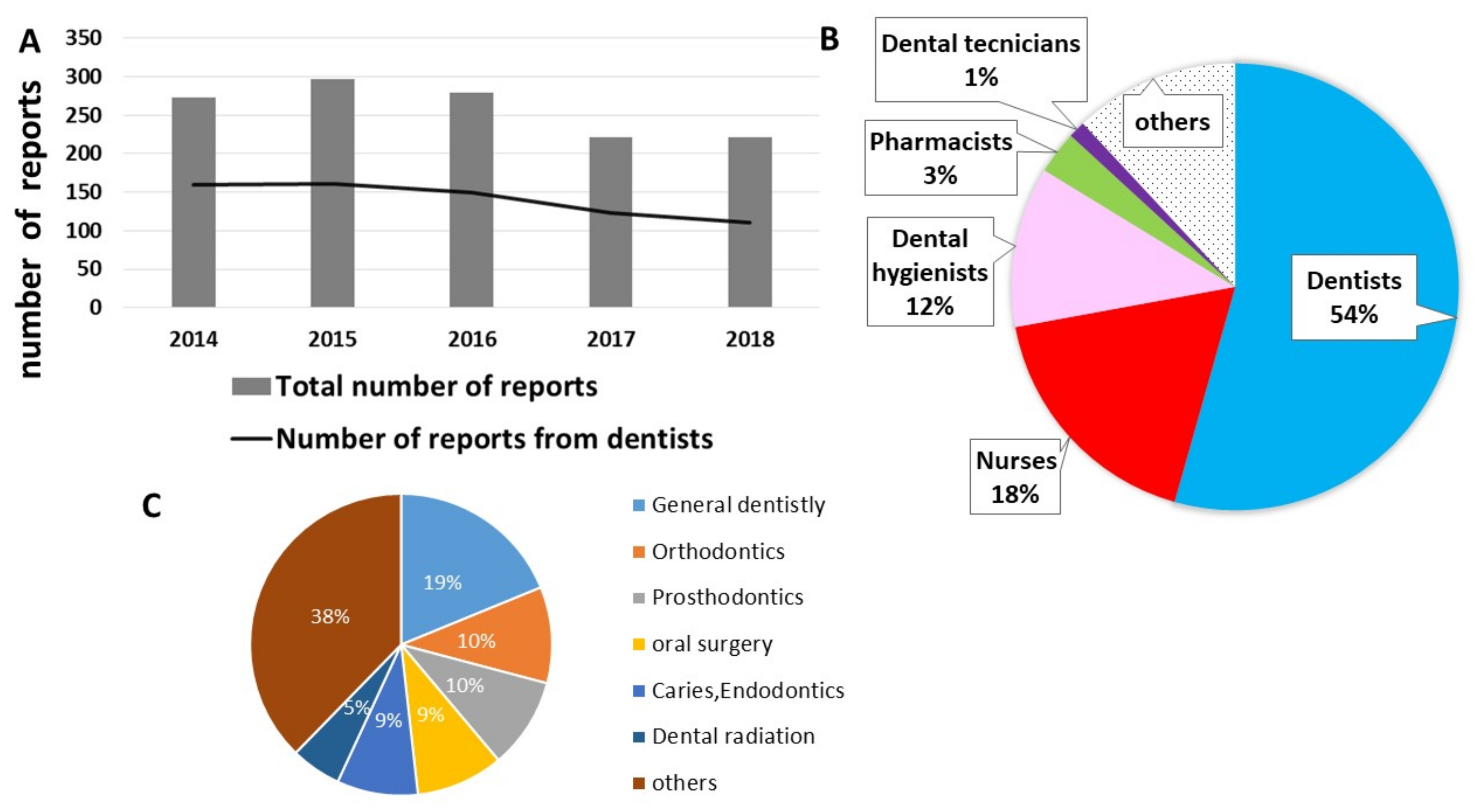 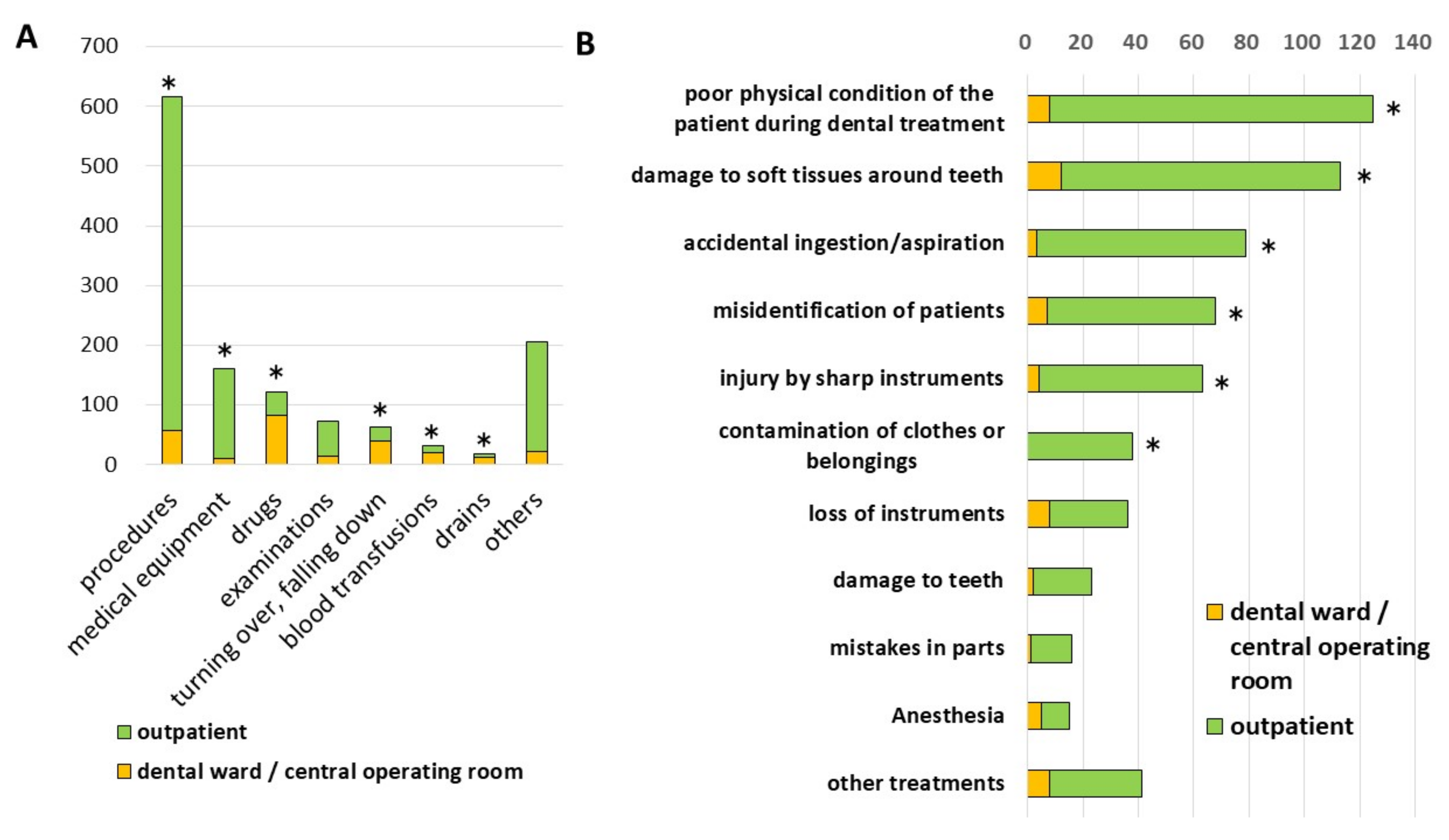 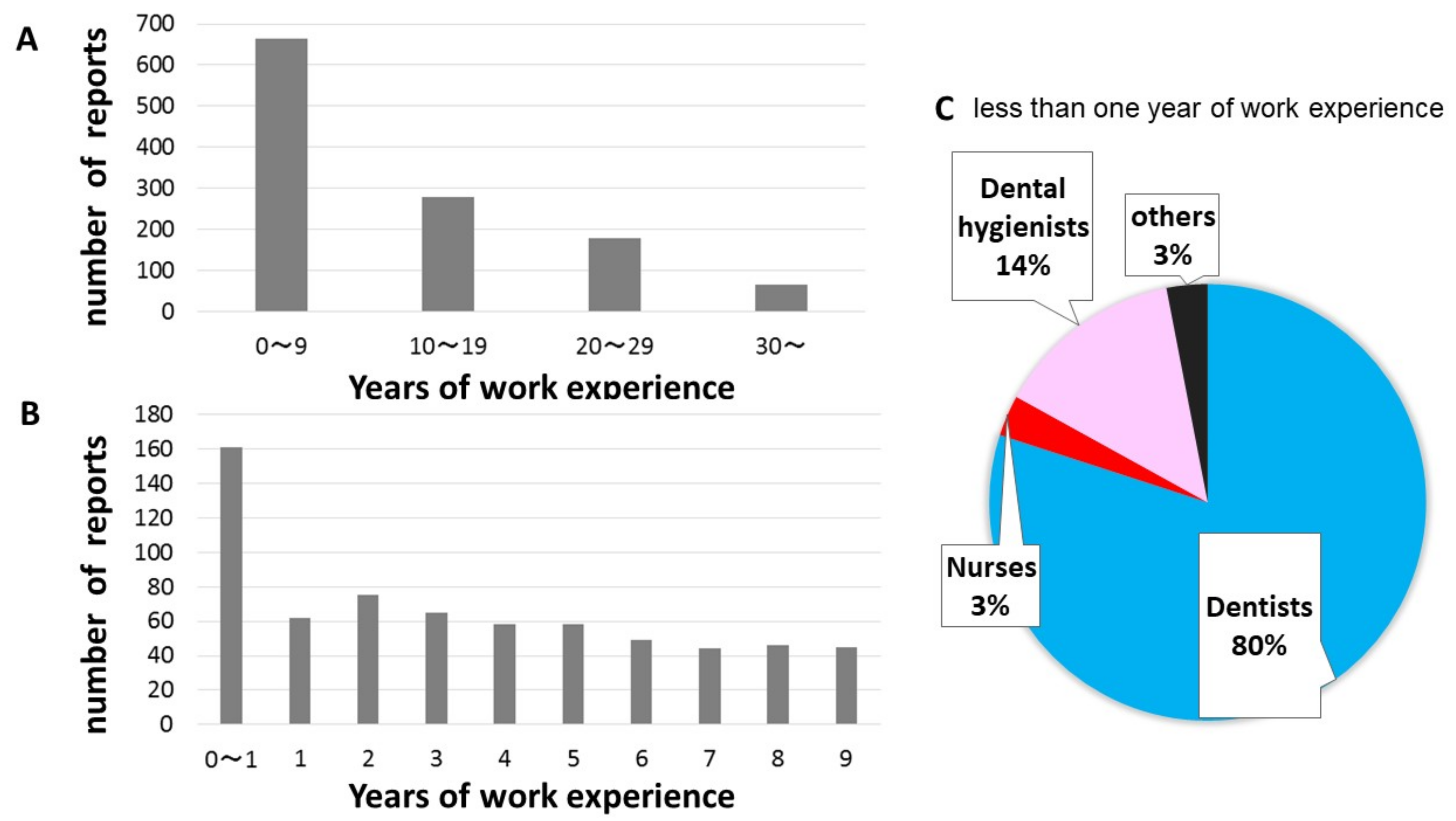 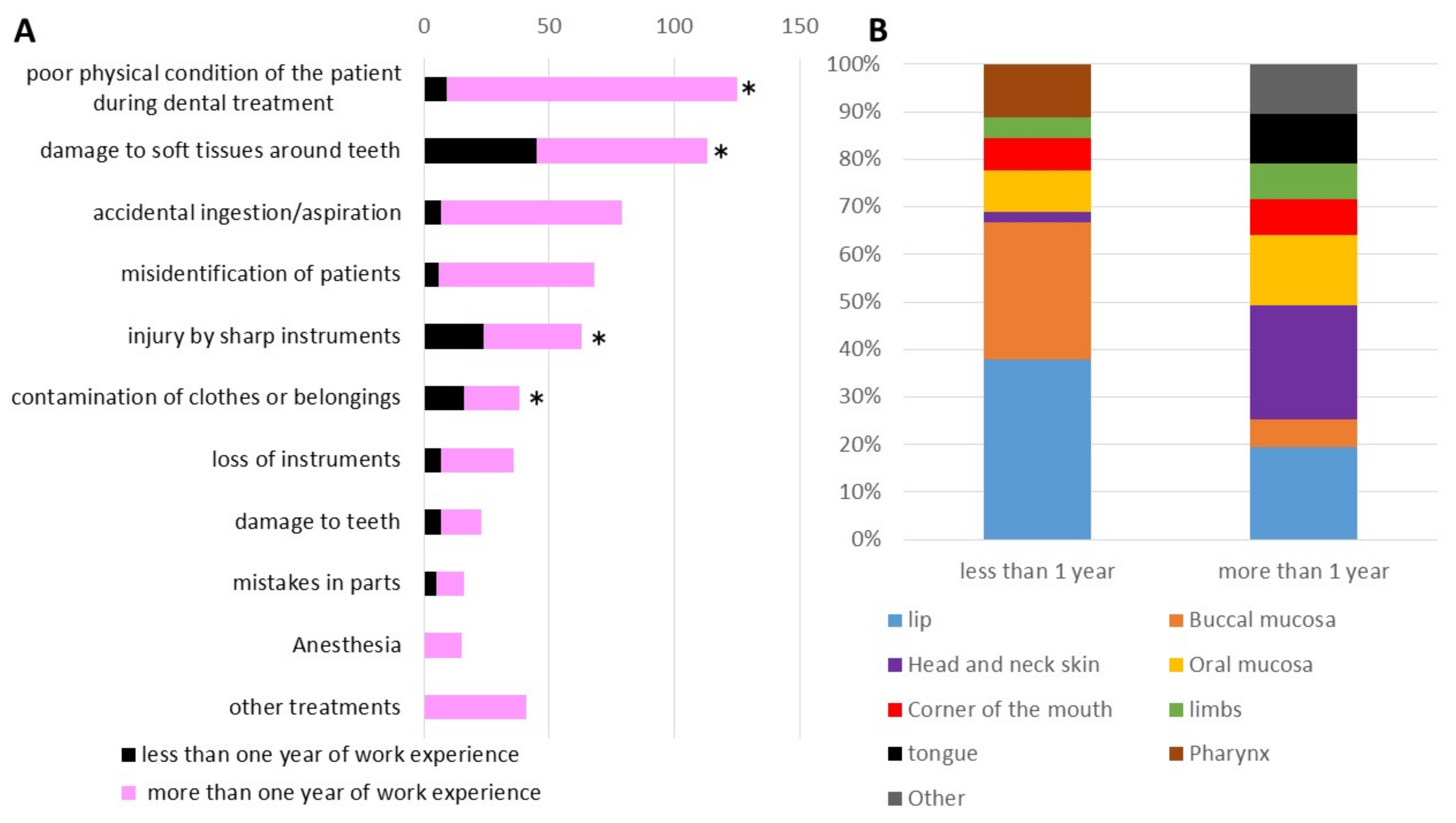 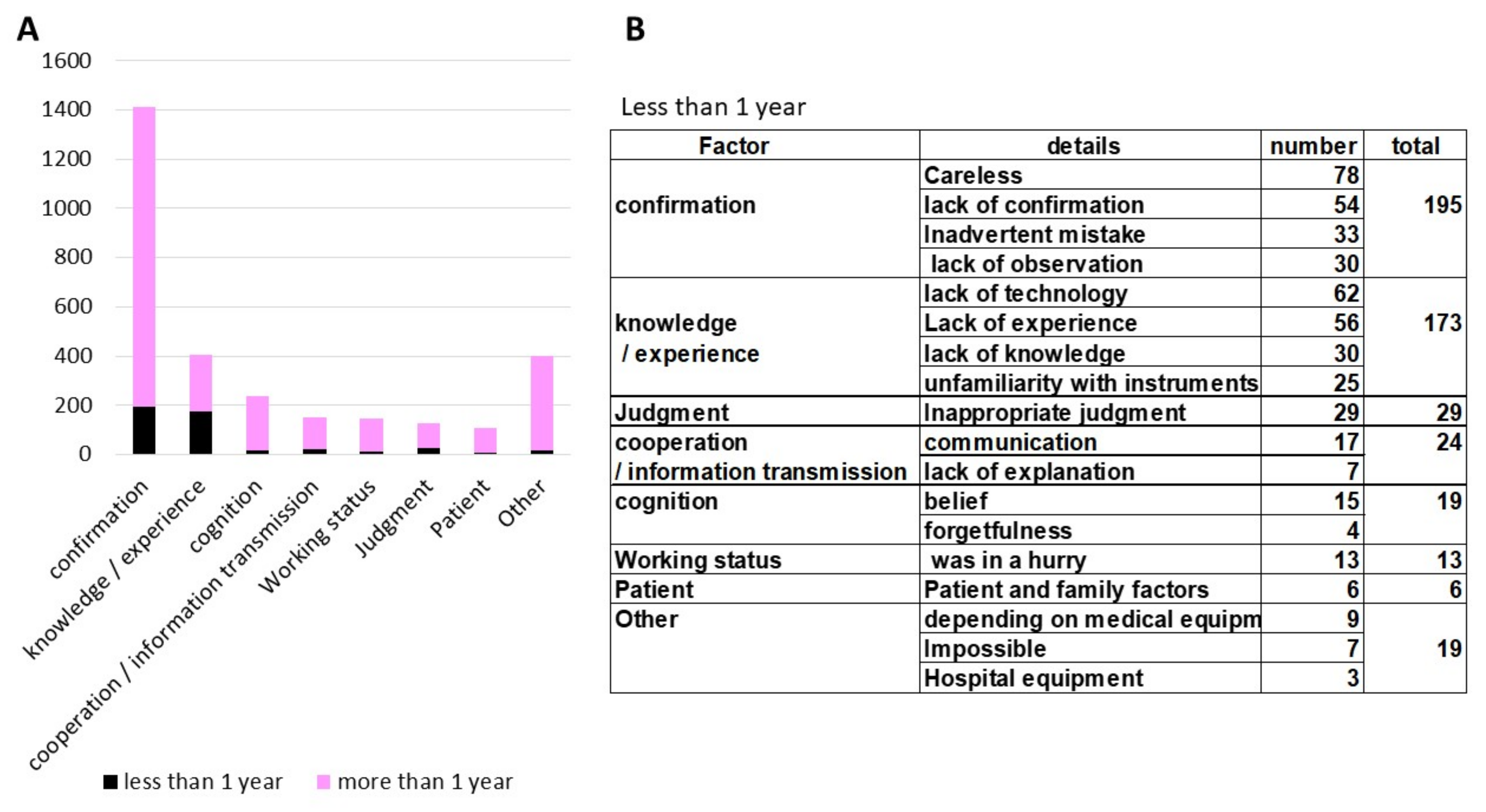