Suicidal Ideation and Mental Health: The Moderating Effect of Coping Strategies in the Police Force
Next Article in Special Issue

Relationship between Reactive Strength and Leg Stiffness at Submaximal Velocity: Effects of Age on Distance Runners

Differences in Visuospatial Expertise between Skeet Shooting Athletes and Non-Athletes

Background: Sports vision is a specialisation of optometry whose objective is to improve and preserve visual function to increase sports performance. The main objective of the present study was to compare the visual expertise of non-athletes to skeet shooting athletes. Methods: Participants underwent an optometric assessment in which all those with severe deviations from normal vision, after compensating for visual abnormalities, were eliminated. After that, the following six visuospatial components were measured: hand–eye coordination, peripheral awareness, fixation disparity, saccadic eye movements, speed of recognition and visual memory. To measure the aforementioned components, the following tests were used: directional arrows, similar and different characters, the dichromatic disparity test, character marking, a tachistoscopic test and tic-tac-toe using COI-vision software. Results: Skeet shooting athletes performed significatively better (p ≤ 0.05) in two out of the six tests: hand–eye coordination and visual memory. Conclusions: Although this study does not support the theory that athletes—in this case, skeet shooting athletes—perform significantly better in most components of the visuospatial tests, visual memory and hand–eye coordination are exceptions. To be more accurate in distinguishing between athletes and non-athletes, specific testing methods that can be used by a wide variety of disciplines should be developed. Training the weakest aspects of athletes can improve their sports performance. View Full-Text
Keywords: visual performance; sports vision; visuospatial expertise visual performance; sports vision; visuospatial expertise
►▼ Show Figures 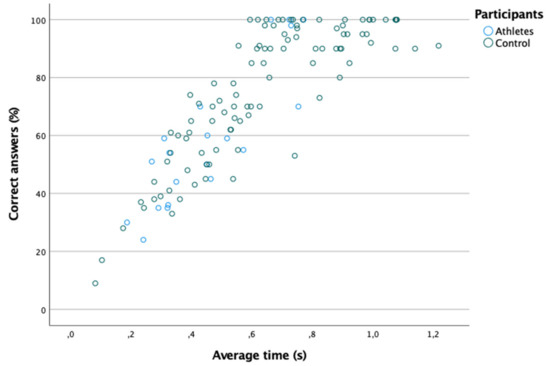