Understanding the Relationship between Situational Strength and Burnout: A Multi-Sample Analysis
Previous Article in Journal

Comparison of Subjective Responses of Low Back Pain Patients and Asymptomatic Controls to Use of Spinal Exoskeleton during Simple Load Lifting Tasks: A Pilot Study
Previous Article in Special Issue

Which Occupation is Highly Associated with Cognitive Impairment? A Gender-Specific Longitudinal Study of Paid and Unpaid Occupations in South Korea

The use of technology has been suggested as a means of allowing continued autonomous living for older adults, while reducing the burden on caregivers and aiding decision-making relating to healthcare. However, more clarity is needed relating to the Activities of Daily Living (ADL) recognised, and the types of technology included within current monitoring approaches. This review aims to identify these differences and highlight the current gaps in these systems. A scoping review was conducted in accordance with PRISMA-ScR, drawing on PubMed, Scopus, and Google Scholar. Articles and commercially available systems were selected if they focused on ADL recognition of older adults within their home environment. Thirty-nine ADL recognition systems were identified, nine of which were commercially available. One system incorporated environmental and wearable technology, two used only wearable technology, and 34 used only environmental technologies. Overall, 14 ADL were identified but there was variation in the specific ADL recognised by each system. Although the use of technology to monitor ADL of older adults is becoming more prevalent, there is a large variation in the ADL recognised, how ADL are defined, and the types of technology used within monitoring systems. Key stakeholders, such as older adults and healthcare workers, should be consulted in future work to ensure that future developments are functional and useable. View Full-Text
Keywords: wearable technology; environmental sensors; autonomous living wearable technology; environmental sensors; autonomous living
►▼ Show Figures 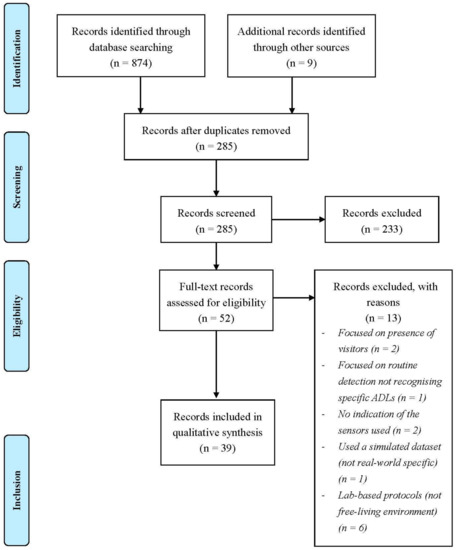