Antioxidants and Exercise Performance: With a Focus on Vitamin E and C Supplementation
Previous Article in Journal

A Qualitative Evaluation of Adverse Drug Reaction Reporting System in Pakistan: Findings from the Nurses’ Perspective

Benefits of Creatine Supplementation for Vegetarians Compared to Omnivorous Athletes: A Systematic Review

1.1. The Benefits of Vegetarian Diets on Health and Performance

There are many reasons why an individual may choose to practice a vegetarian diet, including religious beliefs, ethical considerations, perceived health benefits, or philosophical beliefs [1]. Along the continuum of vegetarian diets, there are several plant-based options of varying restrictiveness. Closest to the standard omnivore diet are the semi-vegetarians who avoid some animal products, most commonly red meats. Lacto–ovo vegetarians avoid eating animals and only consume dairy products and eggs in addition to plant-based foods. Individuals can be further classified into ovo-vegetarians, only consuming plant-based foods and eggs, or lacto-vegetarians, only consuming plant-based foods and dairy products [1,2]. Finally, vegans exclude all animal products including dairy products, eggs, meats, seafood, gelatin, and honey [1].
There has been a sharp rise in athletes who consider a vegetarian diet due to the potential health benefits [2]. Diets including unrefined plant foods are positively correlated with overall health, lifespan, immune function, and cardiovascular health [3,4,5]. High-level athletes often show symptoms of upper respiratory tract infections due to long-term stress placed on the body [6]; thus, maximizing immune function is of great interest to this population. Excess amounts of fat and poor food choices increase exercise-induced suppression of the immune system. When done correctly, vegetarian diets offer the correct amount of healthy fats that will not only decrease immunosuppression but also increase immunocompetence [6,7]. In this light, the American Dietetic Association and Dietitians of Canada state that vegetarian diets are a healthy alternative for athletes of all ages [8]. On the other hand, a vegetarian diet could be lacking in certain macro- and micronutrients if they are not properly supplemented to dietary intake [2]. For instance, some vegetarians may experience low iron, vitamin B12, vitamin D, riboflavin, calcium, and zinc intakes as these nutrients are found in high quantities in animal products [2].
As with all high-performance athletes, basic dietary requirements must be met as well as health and performance needs in order to ensure optimal performance [1,2]. Vegetarians, especially vegans, often consume less energy than omnivores, largely because of the high consumption of fiber in vegetarian diets which promotes satiety [9,10,11]. A vegetarian diet may be lower in protein when compared to an omnivorous diet; therefore, a vegetarian diet requires careful planning to ensure adequate protein consumption [12,13]. Nutrition professionals must pay careful attention to the quantity and quality of protein that vegetarians are consuming because plant-based protein is often not a complete protein [13]. This means the protein is missing essential amino acids, including leucine, valine, phenylalanine, histidine, lysine, methionine, isoleucine, threonine, and tryptophan [14]. Of concern, methionine is a precursor of creatine [15], a natural compound with proven benefits on sport performance.

Creatine is naturally found in animal tissues such as meats, fish, and poultry. As a result, there is decreased intake among vegetarian athletes [2]. Dietary intake of creatine is significantly reduced in individuals following a vegetarian diet (egg and dairy products may contribute to provide very small amounts of creatine), while in vegan diets, almost no exogenous source of creatine is consumed [15]. The amount of creatine is lower in serum, plasma, red blood cells, and muscle, but not in the brain in vegetarians versus omnivores [16,17,18,19]. Further, vitamin B12 deficiency (common in vegetarians) is linked with impairment in methionine production, and this may lead to lower creatine biosynthesis [20]. Therefore, creatine supplementation appears to be a logical approach to offset some of the nutritional concerns associated with vegetarian diets [21].

Approximately 1 g/day of creatine is synthesized by the body from arginine, glycine, and methionine [1]. In individuals consuming meat products, approximately 1 g/day is also consumed through foods. In vegetarian athletes, creatine stores could be lower because of reduced intake of meat. This has the possibility to affect their performance in high-intensity, short-term activities that largely rely on the anaerobic energy system pathways [1]. Approximately 90% of the body’s creatine is stored in muscle as free creatine and phosphocreatine [22]. During high-intensity exercise, phosphocreatine is broken down into creatine and a phosphate molecule. The phosphate molecule is then quickly paired with an ADP molecule to form ATP. This ATP is then used to power muscle contraction [22]. The concentration of phosphocreatine decreases rapidly after the onset of activity, leading to fatigue [12]. Starting an activity with a high store of phosphocreatine helps to enhance performance as well as recovery [22]. As vegetarians do not consume animal products, they may receive strong performance and recovery benefits with creatine supplementation.

2. How Does Creatine Supplementation Affect Omnivores?

Thousands of research trials have been conducted on the effects of creatine supplementation, mostly in omnivores; the results of these trials are summarized across a number of meta-analyses and systematic reviews [23,24,25,26,27,28,29]. The majority of data provide strong support indicating creatine supplementation is beneficial, in particular, for increasing upper and lower body strength [27,28,29], high-intensity anaerobic activities (especially when done in a repeated, intermittent fashion [23,25]), muscle mass [23,25,27], and recovery from exercise [25]; however, creatine supplementation is unlikely to improve aerobic exercise performance [24]. When combined with resistance training, creatine supplementation enables athletes to train at a higher intensity, leading to greater training adaptations, which result in greater anabolic gains [18,30]. During high-intensity and short-term exercise which relies mainly on anaerobic energy system pathways, it may be advantageous to have a larger creatine pool to increase anaerobic exercise capacity and shorten recovery time between bouts of exercise [25].

3. Differences in Creatine Levels in Muscle, Brain, and Blood in Vegetarians Versus Omnivores

Since creatine and phosphocreatine concentrations may be lower in the muscle of vegetarians, there is good potential that supplementation with creatine might improve creatine and phosphocreatine concentrations, and potentially enhance exercise performance and recovery in vegetarians. It should be noted that although creatine is found mostly in animal products, the creatine in most supplements is synthesized from sarcosine and cyanamide [39,40], does not contain any animal by-products, and is therefore “vegan-friendly”. The only precaution is that vegans should avoid creatine supplements delivered in capsule form because the capsules are often derived from gelatin and therefore could contain animal by-products. In our review of the literature, we found one systematic review on the effect of creatine supplementation in vegetarians [41]; however, it included a review of only three manuscripts with two of the manuscripts derived from the same study. The conclusions from this systematic review were therefore limited. Our objective was to systematically review randomized and prospective parallel groups or cross-over studies on the effect of creatine supplementation (compared to placebo) in vegetarians (compared to omnivores where possible) for outcomes including body creatine stores and exercise performance. We hypothesized creatine supplementation would increase creatine concentrations in the blood and muscle of vegetarians (to a greater extent than omnivores) and this would lead to improvements in anaerobic exercise performance.

Our systematic review was performed in accordance with the guidelines for the Preferred Reporting Items for Systematic Review and Meta-Analysis (PRISMA) statement. The literature search was conducted in PubMed and SPORTDiscus, including all dates up until 18 April 2020. Key words and Boolean phrases searched included “creatine” AND “(vegetarian OR vegan OR vegetarianism OR veganism)”. There were no restrictions on language or date. Since creatine supplementation can have short-term effects on muscle function, we considered any length of follow up.
The following population, intervention, comparator, outcomes, and study types (PICOS) were included: The population was vegetarians. The intervention was creatine monohydrate supplementation. The comparator was either a placebo and/or participants who were omnivores. Outcomes included muscle, blood, or brain measurements of creatine or phosphocreatine, any exercise performance measure, lean tissue mass, muscle fiber area, anabolic hormones, creatine transporter levels, and cognitive performance. Study type included randomized controlled trials (parallel group and cross-over trials) and prospective trials.
Titles, abstracts, and full manuscripts were reviewed for inclusion by two reviewers. Data extraction and determination of risk of bias using the most recently revised Cochrane risk of bias tool [42] was also performed by two reviewers. When there were disagreements, the reviewers either came to a consensus or consulted a third reviewer.

Figure 1 outlines the flow chart for the study selection process. Nine studies, published across 11 journal articles, were included. Creatine supplementation studies in vegetarians and effects on creatine concentrations and function of muscle and brain are summarized in Table 1. In Table 1, we present details such as type of vegetarian (i.e., vegan, lacto–ovo, ovo-vegetarianism) and length of vegetarianism of research participants. This was not always reported in the studies we reviewed; therefore, this is one aspect that can be improved in future studies, as these factors could impact response to creatine supplementation. Table 2 presents our risk of bias assessment of included studies. The overall risks of bias for most studies were classified as “some concerns” or “high”, with only one study considered “low”.

The review was designed by M.K.; data interpretation, analysis, and manuscript preparation were undertaken by M.K., K.S. and P.D.C. All authors have read and agreed to the published version of the manuscript.

The authors would like to thank Julianne Gordon and Jon Ko for their assistance in the literature search. 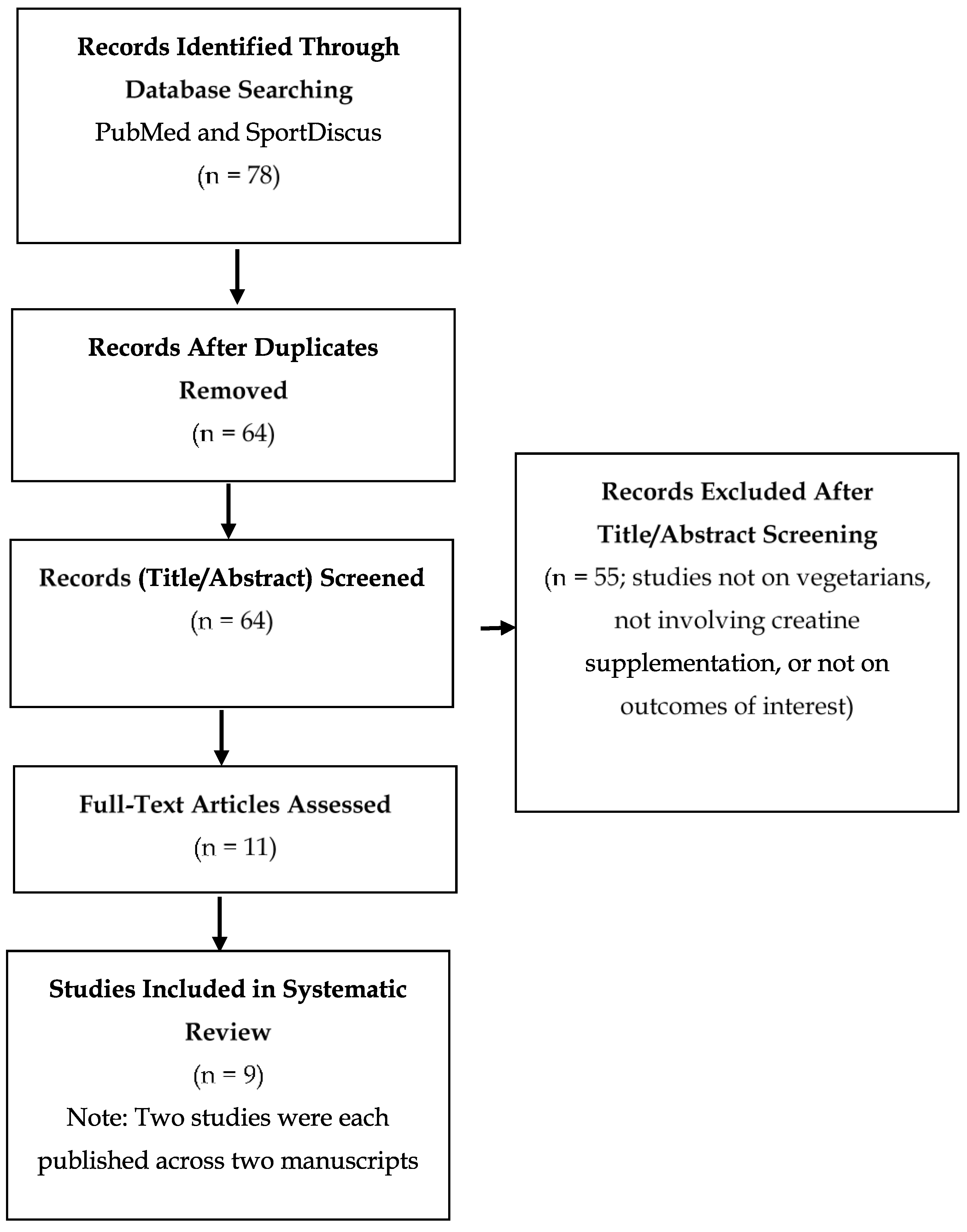