Sex Differences in Comorbidity, Therapy, and Health Services’ Use of Heart Failure in Spain: Evidence from Real-World Data
Previous Article in Special Issue

:
(1) Background: Pedestrian injuries (PIs) represent a significant proportion of road traffic injuries. Our aim was to investigate the incidence and mortality of PIs in different age groups and sociodemographic index (SDI) categories between 1990 and 2017. (2) Method: Estimates of age-standardized incidence and mortality along with trends of PIs by SDI levels were obtained from the Global Burden of Disease from 1990 to 2017. We also forecasted the trends across all the SDI categories until 2040 using the Statistical Package for the Social Sciences (SPSS Statistics for Windows, version 23.0, Chicago, IL, USA) time series expert modeler. (3) Results: Globally, the incidence of PIs increased by 3.31% (−9.94 to 16.56) in 2017 compared to 1990. Men have higher incidence of PIs than women. Forecasted incidence was 132.02 (127.37 to 136.66) per 100,000 population in 2020, 101.52 (65.99 to 137.05) in 2030, and reduced further to 71.02 (10.62 to 152.65) by 2040. Globally across all SDI categories, there was a decreasing trend in mortality due to PIs with the global estimated percentage reduction of 37.12% (−45.19 to −29.04). (4) Conclusions: The results show that PIs are still a burden for all SDI categories despite some variation. Although incidence and mortality are expected to decrease globally, some SDI categories and specific vulnerable age groups may require particular attention. Further studies addressing incidence and mortality patterns in vulnerable SDI categories are needed.
Keywords:
road traffic injuries; pedestrians; public safety; global burden; economic loss; health policy; healthcare system; health indicators

Every day, about 1800 pedestrians never return home due to road traffic injuries and fatalities [1]. An estimated 12 million pedestrian road traffic injuries (PIs) occur on an annual basis [1]. PIs are a major public health problem across all ages and sexes, accounting for nearly one quarter of all road traffic-related injuries [2]. Among all road injuries, PIs carry the highest risk of a person being severely injured, leading to significant morbidity, disability, and death [3,4]. Such a burden inflicts pain and suffering on injured pedestrians and their families and has an economic impact costing approximately 0.5% of the total world Gross National Product and 130 billion US dollars globally [5].
This surge has been due to rapid urbanization leading to an increased amount of motor vehicles as well as changes in the environment and lifestyle due to global economic development [6]. Risk factors of PIs are well described and can vary in different age groups and settings. For example, children’s cognitive development influences their ability to make safe decisions [7]. Adolescents maybe actively seeking out risk [8]. Moreover, longevity and aging lead to increased dependency on personal automobiles for work- and non-work-related activities, which may increase associated risks [9].
Critical reasons for the increase in PIs and a slower progress to reduce such occurrences could be the variation of socioeconomic factors and disparities between different age groups and regions globally. The ambitious United Nations goal to reduce injuries and deaths due to road traffic collisions by 50% in five years from 2015 to 2020 has not been achieved [10,11]. The new 2030 Agenda, referred to as the Sustainable Development Goals (SDGs), included road safety as an important part of global development and a crucial responsibility for governments, corporations, and civil society [11].
Studying global and social variation trends of PIs is essential to mitigate key risk factors. Additionally, such a detailed review will aid the adoption of evidence-based practices and solutions to reduce PIs and related deaths. Furthermore, quantifying a socioeconomic relationship with PIs would help to identify age groups, gender, countries, and regions where increased risk is documented, thereby allowing systematic planning to implement appropriate measures to reduce such risks. Although there has been a detailed report on road traffic injuries, very few studies have quantified PIs by SDI globally [12]. This study aims to investigate the incidence and mortality patterns of PIs in different SDI categories between 1990 and 2017. It also provides forecasts up to 2040.

The latest Global Burden of Disease, Injuries, and Risk factors study 2017 (GBD 2017) is a detailed, multinational, epidemiological study with enhanced methodology providing regional and global estimates. We extracted the data on PIs from the latest GBD 2017 dataset, which is available in the public domain. Ethics approval or permission is not required to use the GBD 2017 data. Age-standardized rates were used to allow comparisons of populations amongst different age groups. International Classification of Diseases (ICD) codes ICD-9 and ICD-10 were used by the GBD 2017 study to extract data for PIs [13,14]. In GBD 2017, the data were obtained from several sources, including public health research studies, vital registrations, verbal autopsies, police records, trauma registries, country-based surveys, health insurance records, emergency departments, hospital out-patient records, and hospital claim records. The PI estimation process in the GBD 2017 study used epidemiological meta-regression tools to produce incidence and mortality by age, gender, year, and location. The detailed methodology was explained in the methods description for the GBD 2017 [15].
The data sources were later systematically quantified using various injury modeling strategies and statistical methods by age, gender, year, country, and cause. A detailed outline concerning the methods of collecting and calculating data for the GBD 2017 study is provided elsewhere [16,17].

The sociodemographic index (SDI) is a composite metric of overall development, which has a strong positive relationship with health outcomes [18]. The measure quantifies and differentiates the countries and regions based on the spectrum of development. It encompasses three different aspects of development and is a geometric mean of income per capita, educational achievement of the population, and the fertility rate [19]. SDI is interpreted on a scale of 0 to 1, with a value of 1 indicating the highest development and value 0 indicating the lowest development. The SDI divides the world regions into five quintiles based on their SDI values from 0 to 1, i.e., low SDI (LSDI), low–middle SDI (LMSDI), middle SDI (MSDI), high–middle SDI (HMSDI), and high SDI (HSDI). A detailed methodology with regard to the calculation of SDI cutoff points is reported elsewhere [17].

Uncertainty estimations could be due to incomplete information, potential biases in information, or heterogeneity among information sources, data generation process, and model uncertainty [20]. Such measurement errors affecting the data input are expressed as the uncertainty interval (UI). The UI represents a range of values that reflects the certainty of an estimate. Entire measures have been reported with a 95% UI.

The Statistical Package for the Social Sciences (SPSS Statistics for Windows, version 23.0, Chicago, IL, USA) was used for statistical analysis. We estimated the percentage difference of incidence and mortality due to PIs for every SDI category with the available GBD 2017 estimates between two time points. We calculated the 95% UIs with the 2.5th and 97.5th percentiles range for the change based on the cause-specific model estimation for each GBD 2017 SDI, age group, gender, and time points between 1990 and 2017 [21]. The SPSS time series modeler with the expert modeler option was used to predict the future trends of PI incidence and mortality. None of the observed values during forecasting were marked as outliers.

3.2. Incidence and Trends by Age and Sex

3.5. Mortality Trends by Age and Sex

In Figure 4, we show the trends for age-specific mortality across SDI categories between 1990 and 2017. Globally, there is an increasing trend starting from the age of 10 to 14 years. Though mortality has reduced globally across all the regions, it is essential to note that the patterns in age trends have not changed in the last three decades.
In Figure 5, we depict the mortality trends by sex per 100,000 population. Globally, across all SDI categories, men had a higher mortality rate than women over time. Globally, the death rate for men in 2017 was 8.90 (8.21 to 9.95) compared to a 3.62 (3.35 to 3.95) death rate for women, which equates to approximately 150% more deaths in men. Furthermore, in 2017, the smallest difference in mortality rate between sexes was observed in the HSDI category, where it was notably twice as high in men at a rate of 2.32 (2.25 to 2.42), compared to 1.07 (1.03 to 1.11) in women.

To our knowledge, this study provides the first overview of global patterns and trends of incidence and mortality of PIs by different SDI regions. However, our results should be reviewed with consideration of the following limitations. Firstly, this study was undertaken using the secondary data from the GBD 2017, which could possibly have inconsistent coding, non-coding, or under-reporting of PIs, leading to overestimation or underestimation of PIs. Such coding errors are especially prevalent in under-resourced SDI regions such as the LSDI and LMSDI countries. However, with the GBD methodology, there is a clear framework to take care of such sampling and non-sampling errors [14]. Moreover, we predicted the future incidence and mortality trends of PIs based on the results obtained from 1990 to 2017. Further studies are required with primary data obtained from nationwide observational studies or trauma registries to verify our findings. Accordingly, trends in the pattern of incidence and mortality may change if national policies, transportation, and socioeconomic parameters related to PIs are modified.

Many parts of the world are undergoing economic and social development together with the development of road and transportation systems, including public transportation, which could have a major impact on the mortality and morbidity related to PIs. Moreover, national policies coupled with public health campaigns related to road and traffic safety are warranted to better educate both motorists and pedestrians. Future studies related to PIs should include time variations of these factors in their estimates. The advent of the technology and availability of driverless cars may have a major impact on traffic safety and reducing the burden of PIs.

This study did not receive any external grants from government, private, or commercial sources. 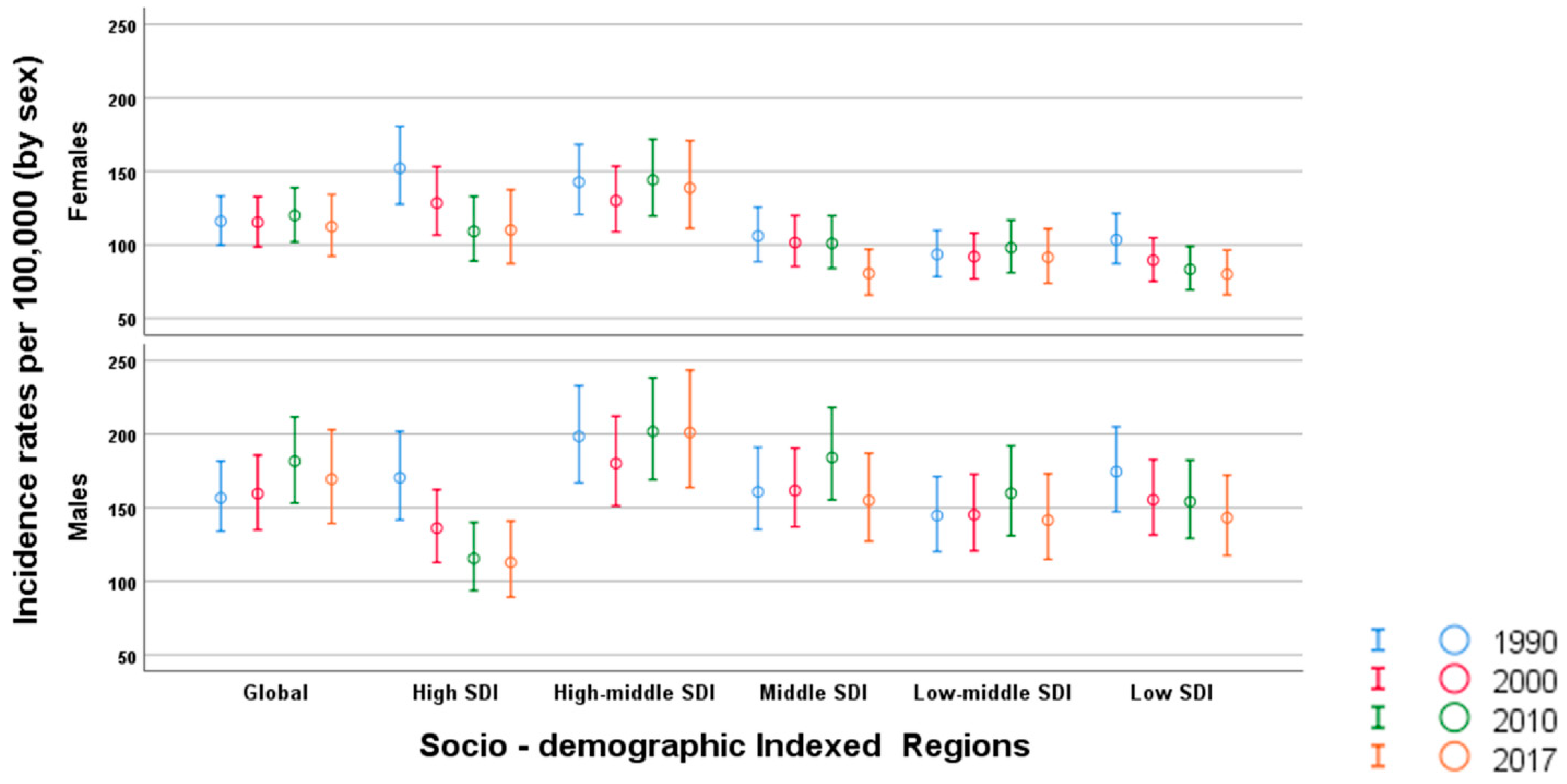