Sebastian Van As
5 and

Background: Child road traffic injuries are a major global public health problem and the issue is particularly burdensome in middle-income countries such as South Africa where injury death rates are 41 per 100,000 for under 5′s and 24.5 per 100,000 for 5–14-year-old. Despite their known effectiveness in reducing injuries amongst children, the rates of use of child restraint systems (CRS) remains low in South Africa. Little is known about barriers to child restraint use especially in low- and middle-income countries. Methods: We carried out observation studies and parent/carer surveys in 7 suburbs of Cape Town over a three month period to assess usage rates and explore the knowledge and perceptions of parents towards child restraint legislation, ownership and cost; Results: Only 7.8% of child passengers were observed to be properly restrained in a CRS with driver seatbelt use and single child occupancy being associated with higher child restraint use. 92% of survey respondents claimed to have knowledge of current child restraint legislation, however, only 32% of those parents/carers were able to correctly identify the age requirements and penalty. Reasons given for not owning a child seat included high cost and the belief that seatbelts were a suitable alternative. Conclusions: These findings indicate the need for a tighter legislation with an increased fine paired with enhanced enforcement of both adult seatbelt and child restraint use. The provision of low-cost/subsidised CRS or borrowing schemes and targeted social marketing through online fora, well baby clinics, early learning centres would be beneficial in increasing ownership and use of CRS. View Full-Text
Keywords: child injury; passengers; restraints; affordability; availability child injury; passengers; restraints; affordability; availability
►▼ Show Figures 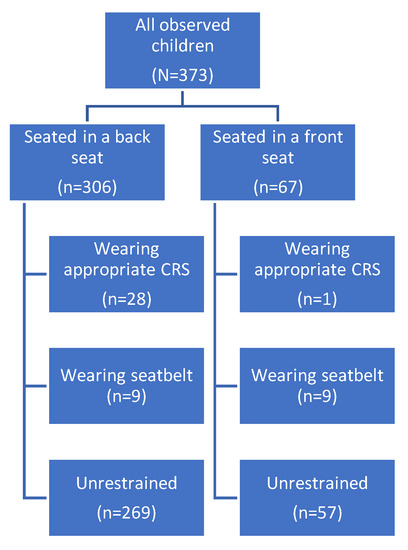