Economic Evaluation of Hepatitis C Treatment Extension to Acute Infection and Early-Stage Fibrosis Among Patients Who Inject Drugs in Developing Countries: A Case of China

We aimed to assess the cost-effectiveness of (1) treating acute hepatitis C virus (HCV) vs. deferring treatment until the chronic phase and (2) treating all chronic patients vs. only those with advanced fibrosis; among Chinese genotype 1b treatment-naïve patients who injected drugs (PWID), using a combination Daclatasvir (DCV) plus Asunaprevir (ASV) regimen and a Peg-interferon (PegIFN)-based regimen, respectively. A decision-analytical model including the risk of HCV reinfection simulated lifetime costs and quality-adjusted life-years (QALYs) of three treatment timings, under the DCV+ASV and PegIFN regimen, respectively: Treating acute infection (“Treat at acute”), treating chronic patients of all fibrosis stages (“Treat at F0 (no fibrosis)”), treating only advanced-stage fibrosis patients (“Treat at F3 (numerous septa without cirrhosis)”). Incremental cost-effectiveness ratios (ICERs) were used to compare scenarios. “Treat at acute” compared with “Treat at F0” was cost-saving (cost: DCV+ASV regimen—US$14,486.975 vs. US$16,224.250; PegIFN-based regimen—US$19,734.794 vs. US$22,101.584) and more effective (QALY: DCV+ASV regimen—14.573 vs. 14.566; PegIFN-based regimen—14.148 vs. 14.116). Compared with “Treat at F3”; “Treat at F0” exhibited an ICER of US$3780.20/QALY and US$15,145.98/QALY under the DCV+ASV regimen and PegIFN-based regimen; respectively. Treatment of acute HCV infection was highly cost-effective and cost-saving compared with deferring treatment to the chronic stage; for both DCV+ASV and PegIFN-based regimens. Early treatment for chronic patients with DCV+ASV regimen was highly cost-effective.
Keywords: hepatitis C virus; cost-effectiveness; antiviral treatment; people who inject drugs hepatitis C virus; cost-effectiveness; antiviral treatment; people who inject drugs

Hepatitis C virus (HCV) infection remains the leading cause of liver cirrhosis or hepatocellular carcinoma [1], and has a substantial negative impact on patients’ quality of life and functioning [2,3,4]. HCV infection can be classified as acute or chronic infection. The acute infection was defined as a new infection occurring from the time of exposure up through six months of infection [5]. Approximately 26% (95% confidence interval [CI]: 22–29%) of the acute-infected individuals would spontaneously clear infection, otherwise the chronic infection would subsequently develop [5,6].
People who inject drugs (PWID) were one of the most at-risk populations for HCV [1]. In 2017, there were an estimated 15.6 million PWID aged 15–64 years worldwide, and among them 52% (95% CI: 42–62%) were infected with HCV [7], accounting for 8% of current HCV infections globally [1]. PWID also accounted for the biggest proportion (estimated 23%) of acute HCV infections worldwide [1], and were at an increased risk of reinfection from HCV and excess mortality from drug overdose [8,9].
To eliminate HCV, the World Health Organization (WHO) put forward a 2030 target that 80% of diagnosed HCV cases would be treated, and suggested that PWID should be prioritized for treatment [10]. China has the largest number of PWID in the world, with an estimated HCV seroprevalence of 67.0% [11], and approximately 25% new infection [12,13]. Oral direct-acting antivirals (DAAs) regimen and the Peg-interferon (IFN)-based regimen are two types of antiviral drugs for the treatment of HCV. Due to the expensive nature of DAAs, in China and many other resource-limited settings where DAAs are newly or not yet approved, PegIFN-based regimen is still the frontline HCV therapy [14]. PegIFN as a monotherapy is the frontline therapy for acute HCV infection, while combining PegIFN with ribavirin (RBV) is the frontline therapy for chronic HCV infection [14]. In April 2017, the combination of Daclatasvir (DCV)+Asunaprevir (ASV) as the first generic DAAs was approved in China, and it represented a treatment option for chronic HCV genotype 1b infection [15], the predominant genotype (56.8%) in China [16].
Due to economic issues and limited health care infrastructure in China, as in other resource-limited settings, policy makers should determine which subgroup should be prioritized for HCV treatment. Regarding acute HCV infection among PWID [11], PegIFN and DAAs therapies have already been demonstrated to be with higher efficacy and shorter-duration than treating chronic HCV infection [17]. However, current clinic practice recommends deferring treatment to the chronic stage or monitoring patients with acute HCV for at least 12–24 weeks [5]. On one hand, treating acute HCV infection may lead to unnecessary additional costs and over-treatment, because some individuals would spontaneously clear infection and have no symptoms [6]. On the other hand, the cost-effectiveness of early treatment of acute infection was not confirmed. Only one modeling-based study from the United States suggested that treatment of acute HCV infection under the DAAs regimen was cost-effective compared with deferring treatment to the chronic stage, but it did not include HCV reinfection in the model [5]. This may result in underestimating or overestimating the benefits of treatment for acute infection among PWID patients. What’s more, the results might not necessarily be applied to the developing countries as the cost-effectiveness of HCV treatment was influenced by the cost of treatment and the risk of reinfection [18]. Therefore, it is necessary to confirm the cost-effectiveness of initiating therapy in the acute vs. deferring until the chronic phase of HCV infection, among PWID patients, especially in developing countries.
Regarding chronic HCV infection among PWID, the WHO recommends “treat all” based on previous cost-effectiveness studies, which suggested initiating treatment for chronic HCV regardless of the fibrosis stages [1]. However, these cost-effectiveness analyses were all conducted in developed countries, such as Australia [19,20,21], the Netherlands [22], the United Kingdom [23,24,25] and Italy [26]. Evidence on the cost-effectiveness of expanding treatment to the early fibrosis stage related to access to HCV treatment was substantially more limited in developing countries. Only one study in Egypt [27] suggested that immediate treatment of patients with early fibrosis stage was less expensive and more effective than delaying treatment, but it did not include the possibility of HCV reinfection in the model. This omission may result in underestimating or overestimating the benefits of early treatment for chronic infection [1]. In China, the oral DAAs have been confirmed to be cost-saving and cost-effective compared with the PegIFN-based regimen [28], but the cost-effectiveness of initiating treatment at an early fibrosis stage compared with advanced fibrosis stage was not reported. Furthermore, previous studies in developed and developing countries focused only on either DAAs or PegIFN-based therapy for HCV. They did not indicate how to adjust treatment strategy to local conditions in the presence of both drugs.
Thus, this study used the case of China to conduct a model-based analysis to examine the cost-effectiveness of different treatment timings under DCV+ASV and PegIFN-based regimens, respectively. With a hypothesis that early treatment was more effective, we first compared treatment at acute with deferring treatment until stage F0, to determine the cost-effectiveness of treating acute HCV, under DCV+ASV and PegIFN-based regimens, respectively. Then, we compared treatment at stage F0 with until stage F3, to assess the cost-effectiveness of early treatment for chronic HCV among PWID, under DCV+ASV and PegIFN-based regimens, respectively.

Based on natural history of HCV infection, we considered regression of liver damage and HCV reinfection among PWID. We developed a Markov cohort, state-transition model to evaluate the health outcomes and costs of treatment at different timing with DCV+ASV or PegIFN-based regimen. This model has been received by decision makers and clinicians [5,29]. The disease stage-transition reflect progression through the acute phase or 5 METAVIR (Meta-analysis of Histological Data in Viral Hepatitis) liver fibrosis stages (F0, no fibrosis; F1, portal fibrosis with septa; F2, portal fibrosis with rare septa; F3, numerous septa without cirrhosis; F4, compensated cirrhosis) to advanced liver disease (DC, decompensated cirrhosis; HCC, hepatocellular carcinoma; LT, liver transplantation; and Post-LT) and regression of liver damage or reinfection after patients cleared the virus. We simulated the clinical course of the patients and projected long-term outcomes such as quality-adjusted life years (QALYs) and costs. The model ran in a monthly cycle length until all patients died. Additional details were provided in Figure 1, and input parameters were summarized in Supplementary Table S1.

Acute HCV patient who failed to spontaneously clear the virus or be cured would progress to F0 fibrosis stage after six months. Patients at F0 who failed to be cured progressed through different stages of liver fibrosis (F0–F4). Patients with F4 could further progress to DC, HCC. Transition probabilities between states were obtained from published systematic reviews and observational studies. Patients with DC and HCC were eligible for liver transplantation. The likelihood of LT was estimated from previous studies as 0.008 (95% CI: 0.006–0.01) (Supplementary Figure S1).

Our base-case cohort was representative of newly diagnosed and treatment-naïve genotype 1b HCV RNA positive PWID in China. Patients coinfected with HIV or HBV were excluded. The mean age of the cohort at the baseline was 20.7 years old [30]. Distribution of HCV stages at baseline was calculated on the basis of previous investigation in China [12,13]: Acute 25%, F0 22.5%, F1 17.2%, F2 7.5%, F3 9%, and F4 18.8%. The model did not distinguish patients from viral concentration, sex, or race, although these factors may affect treatment outcomes [29].

2.4. Progression, Regression and Reinfection after SVR

Patients who cleared virus entered the recovered states, and some patients could experience regression of liver fibrosis. Despite being cured, patients in the F4_SVR state risked progression to DC or HCC, but with a greatly reduced rate [31,32]. To make a conservative estimation of the cost-effectiveness of treatment in PWID, we stated that reinfection would occur at a high proportion of 19.0% (range: 0.6–19.0%) [8,33]. Those re-infected patients would spontaneously re-clear the virus with a proportion of 52% (95% CI: 33–73%) [34], then other patients would re-enter the Markov HCV progression to the chronic HCV state to receive treatment. Those who failed treatment were not eligible for re-treatment. Previous studies had suggested that broadly expanded treatment could provide substantial health gains due to the reduced the reinfection risks [18]. In this study, due to the lack of data in China, we made a relatively conservative assumption of the expanding treatment’s potential for reducing HCV reinfection as 5% (range: 2.5–7.5%) [5], one-way sensitivity analysis would be conducted to determine its impact on cost-effectiveness.

The societal perspective of Chinese was adopted to calculate all direct medical costs for HCV management and therapy (Supplementary Table S1). All outcomes were presented on per cohort basis.
All costs were expressed as US dollars using official exchange rates as of 2018 (US$1 = 6.62 CNY) [43]. Regimen costs of pegIFN-based and DCV+ASV regimens were derived from previous economic evaluations in a Chinese setting [42,44]. The annual direct medical costs of managing patients at stages F0–F4, DC, and HCC were obtained from a real-world study in China [44], which included the costs of outpatient visits and post-treatment monitoring. The annual costs of liver transplantation and post-liver transplantation were gained from literature focused on health costs among chronic hepatitis B infection in China [45]. HCV-RNA and genotype tests were used to confirm infection. HCV-RNA test was also used to determine whether spontaneous clearance had occurred, and the relevant costs were obtained from local charges.
The model included health state utility values by fibrosis stages with and without SVR and disutility during treatment. Utility values were obtained from previous literatures based on SF-36 [28,46,47,48]. We assumed the utility value for the acute phase of HCV was equal to that for the F0 states, and post SVR or spontaneously cleared virus patients from acute phase was equal to that for the F0_SVR patients.

3.1.2. Cost-Effectiveness of Early Treatment at F0 Stage for Chronic HCV among PWID

3.2.2. Cost-Effectiveness of Early Treatment at F0 Stage for Chronic HCV among PWID

In conclusion, treatment of acute HCV infection was highly cost-effective and cost-saving compared with deferring treatment to the chronic stage, for both DCV+ASV and PegIFN-based regimens. For patients who have been chronically infected, early treatment for chronic patients with DCV+ASV regimen was highly cost-effective. In those resource-limited settings where DCV+ASV or other DAAs were not available, prioritized treatment for those with advanced-stage fibrosis may be a better option. In the future, some real-world studies are needed to confirm and quantify the effects of HCV treatment in mathematical modeling studies. Similarly, it is also important to further examine the cost-effective of HCV treatment in other developing countries, especially in low- and middle-income countries. 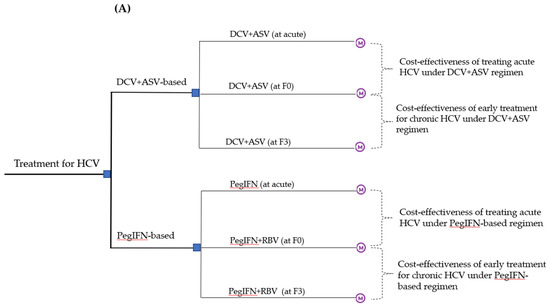 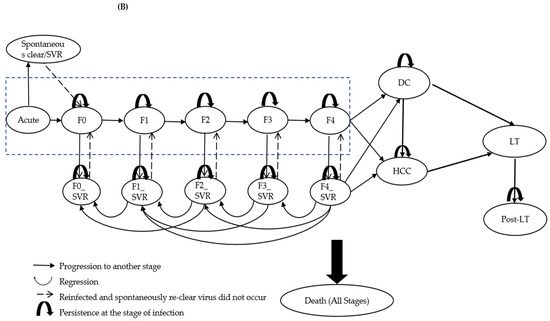