The fate of water and water-soluble toxic wastes in the subsurface is of high importance for many scientific and practical applications. Although solute transport is proportional to water flow rates, theoretical and experimental studies show that heavy-tailed (power-law) solute transport distribution can cause chemical transport retardation, prolonging clean-up time-scales greatly. However, no consensus exists as to the physical basis of such transport laws. In percolation theory, the scaling behavior of such transport rarely relates to specific medium characteristics, but strongly to the dimensionality of the connectivity of the flow paths (for example, two- or three-dimensional, as in fractured-porous media or heterogeneous sediments), as well as to the saturation characteristics (i.e., wetting, drying, and entrapped air). In accordance with the proposed relevance of percolation models of solute transport to environmental clean-up, these predictions also prove relevant to transport-limited chemical weathering and soil formation, where the heavy-tailed distributions slow chemical weathering over time. The predictions of percolation theory have been tested in laboratory and field experiments on reactive solute transport, chemical weathering, and soil formation and found accurate. Recently, this theoretical framework has also been applied to the water partitioning at the Earth’s surface between evapotranspiration, ET, and run-off, Q, known as the water balance. A well-known phenomenological model by Budyko addressed the relationship between the ratio of the actual evapotranspiration (ET) and precipitation, ET/P, versus the aridity index, ET0/P, with P being the precipitation and ET0 being the potential evapotranspiration. Existing work was able to predict the global fractions of P represented by Q and ET through an optimization of plant productivity, in which downward water fluxes affect soil depth, and upward fluxes plant growth. In the present work, based likewise on the concepts of percolation theory, we extend Budyko’s model, and address the partitioning of run-off Q into its surface and subsurface components, as well as the contribution of interception to ET. Using various published data sources on the magnitudes of interception and information regarding the partitioning of Q, we address the variability in ET resulting from these processes. The global success of this prediction demonstrated here provides additional support for the universal applicability of percolation theory for solute transport as well as guidance in predicting the component of subsurface run-off, important for predicting natural flow rates through contaminated aquifers. View Full-Text
Keywords: subsurface hydrology; percolation theory; solute transport; chemical weathering; water balance subsurface hydrology; percolation theory; solute transport; chemical weathering; water balance
►▼ Show Figures 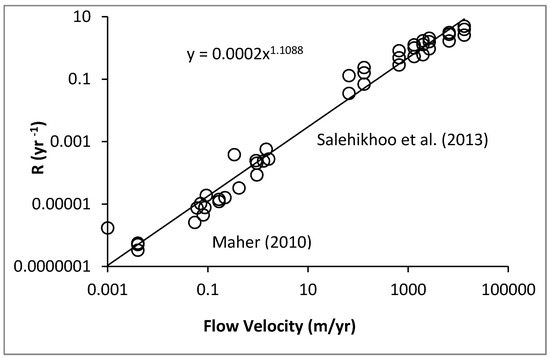