Enhancement of Chromium (VI) Reduction in Microcosms Amended with Lactate or Yeast Extract: A Laboratory-Scale Study

Neonatal Transport in the Practice of the Crews of the Polish Medical Air Rescue: A Retrospective Analysis

The aim of the study was to present characteristics of patients transported in incubators by crews of Helicopter Emergency Medical Service (HEMS) and Emergency Medical Service (EMS) of the Polish Medical Air Rescue as well as the character of their missions. The study was based on the method of retrospective analysis of neonatal transports with the use of transport incubators by the crews of HEMS and EMS of the Polish Medical Air Rescue. The study covered 436 medical and rescue transports of premature babies and full-term newborns in the period between January 2012 and December 2018. The study group consisted mainly of male patients (55.05%) who, on the basis of the date of delivery, were qualified as full-term newborns (54.59%). During the transport their average age was 37.53 (standard deviation, SD 43.53) days, and their average body weight was 3121.18 (SD 802.64) grams. A vast majority of neonatal transports were provided with the use of a plane (84.63%), and these were medical transports (79.36%). The average transport time was 49.92 (SD 27.70) minutes with the average distance of 304.27 km (SD 93.05). Significant differences between premature babies and full-term newborns were noticed in terms of age and body weight at the moment of transport, diagnosis based on the International Statistical Classification of Diseases and Related Health Problems (ICD-10), the most commonly used medications (prostaglandin E1, glucose, furosemide, vitamins), National Advisory Committee for Aeronautics (NACA) scale rate as well as the mission type and the presence of an accompanying person. View Full-Text
Keywords: Helicopter Emergency Medical Service; Emergency Medical Service; neonates; newborn infant; interhospital transport; incubator Helicopter Emergency Medical Service; Emergency Medical Service; neonates; newborn infant; interhospital transport; incubator
►▼ Show Figures 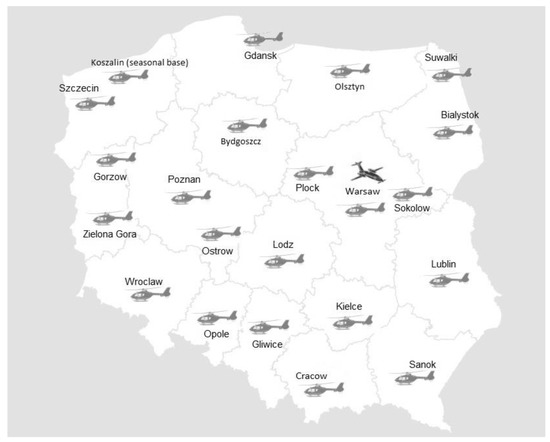