Spatiotemporal Analysis of the Population Risk of Congenital Microcephaly in Pernambuco State, Brazil

The Association of Knowledge, Attitudes and Access with Park Use before and after a Park-Prescription Intervention for Low-Income Families in the U.S.

We conducted secondary data analyses of pooled data from a clinical trial that prescribed park visits to children and their caregivers in a low-income, urban setting. Data were collected at the prescribing visit (baseline) and at one and three months of follow up from 78 families. Family characteristics were identified at baseline; regression models were used to explore changes during follow up in associations of park use with knowledge, attitudes and perceived access to parks. At baseline, park users differed from non-users in demographics, knowledge of park locations, attitudes about the value of park visits, but not affinity for nature. Park users were also more likely than non-users to feel that their neighborhood was safe for children to play in. Changes in knowledge of park locations, nature affinity, and perceived access to parks were each significantly associated with increased park use by families at one and three months after the park prescription. Adjusting for age, gender, race, poverty, and US birth, increases in knowing the location of parks were associated with an increase of 0.27 weekly park visits (95% CI 0.05, 0.49; p = 0.016); increases in feeling a caregiver had money to visit parks were associated with 0.48 more weekly park visits (95% CI 0.28, 0.69; p < 0.001); increases in perceived money for park outings were associated with 0.24 increased park visits per week (95% CI 0.05, 0.42; p = 0.01); each unit increase in nature affinity was associated with 0.34 more weekly park visits (95% CI 0.09, 0.59; p = 0.007). In other words, knowing where to go, valuing nature, and having time, and money contributed to increased likelihood of visiting a park. We discuss in terms of health behavior theory how demographics, knowledge, attitudes and perceived barriers to park use can inform park prescription interventions. View Full-Text
Keywords: park use; pediatrics; health; park prescriptions; behavioral theory park use; pediatrics; health; park prescriptions; behavioral theory
►▼ Show Figures 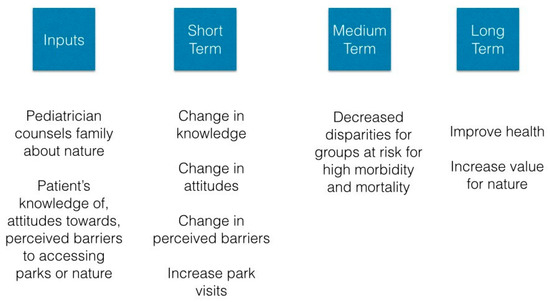 
Razani N, Hills NK, Thompson D, Rutherford GW. The Association of Knowledge, Attitudes and Access with Park Use before and after a Park-Prescription Intervention for Low-Income Families in the U.S. International Journal of Environmental Research and Public Health. 2020; 17(3):701. https://doi.org/10.3390/ijerph17030701


Razani, Nooshin, Nancy K. Hills, Doug Thompson, and George W. Rutherford. 2020. "The Association of Knowledge, Attitudes and Access with Park Use before and after a Park-Prescription Intervention for Low-Income Families in the U.S." International Journal of Environmental Research and Public Health 17, no. 3: 701. https://doi.org/10.3390/ijerph17030701