Psychological Correlates of Ghosting and Breadcrumbing Experiences: A Preliminary Study among Adults
Next Article in Special Issue

Equipment Became Better in Backcountry Skiing—Did Severity of Injuries Decrease? An Analysis from the Swiss Alps

Characteristics of Victims of Fall-Related Accidents during Mountain Hiking

The study evaluated characteristics of non-fatal mountain hiking accidents caused by falls. Questionnaires were sent to mountain hikers who suffered a fall-related accident in Tyrol (Austria) during a 3-year period. The questionnaire included details of socio-demographic data, physical activity, medication intake, defective vision, breaks, fluid intake, level of fatigue, muscle soreness, use of backpacks, use of hiking sticks, and type of shoes. Data of 405 individuals (57% females and 43% males) were included in the analyses. Victims were 56 ± 15 years of age, had a body mass index of 24.8 ± 3.5, and indicated 4.2 ± 3.9 h/week regular physical activity. A defective vision was reported by 70% of the victims, breaks were frequent (in 80%), and alcohol intake was rare (4%) among the interviewed hikers. Subjective level of fatigue was low and only 5% reported muscle soreness. A backpack was carried by 83% of the victims and the average weight was higher in males compared to females. The majority (61%) of the victims wore ankle-height hiking shoes with a profiled sole. Victims of non-fatal falls in mountain hiking are older than the general population of mountain hikers and are often afflicted with defective vision.
Keywords: mountain sports; accident; emergency; fall; risk mountain sports; accident; emergency; fall; risk

Mountain-sport activities are practiced by an increasing number of persons. In 2001, the number of tourists visiting altitudes above 2000 m was estimated at 40 million people per year in the Alps and worldwide, an annual sum of 100 million high-altitude tourists was assumed [1]. In the Alps, mountain hiking is the most attractive mountain-sport activity during the summer season with many millions of hikers in Austria each year [2] including healthy people, but also individuals with pre-existing chronic diseases [3].
Mountain hiking is recommended as a suitable physical activity for health prevention in young and elderly persons [4] due to it requiring use of a large muscle mass for a prolonged period of time at a predominantly moderate intensity [5]. In addition to the physical activity of mountain hiking itself, the exposure to moderate altitudes and therefore to mild hypoxic conditions, may have additional health benefits [6].
The other side of the undoubtedly positive health effects of mountain hiking activities is the risk of accidents, emergencies, and even fatalities. Previous studies calculated a mortality rate of about 4 deaths per 100,000 hikers per year [2], which is about 4-fold compared to alpine skiing [7]. Falls are responsible for nearly 50% of all fatal and non-fatal accidents during mountain hiking [8,9]. Therefore, the prevention of falls could effectively contribute to reduce accidents, to improve safety, and to optimize the benefit-risk-ratio in mountain hiking. Present research in mountain hiking focused mainly on cardiovascular emergencies. Several risk factors for cardiovascular emergencies (i.e., sudden cardiac deaths) during mountain hiking were identified and general preventive measures have been developed and published [2,8]. However, despite the high frequency, systematic research on mountain hiking accidents caused by falls is scarce and studies dealing with falls not related to mountain sports [10,11] cannot be used to derive recommendations for mountain hiking since external (e.g., terrain) and internal (e.g., fitness of the persons) circumstances are completely different in mountain hiking. Data of previous hiking-specific studies rely on routine data collection of rescue organizations or police reports [9,12,13] and, therefore, information is limited. Therefore, the goal of the present study was to provide detailed characteristics of non-fatal mountain hiking accidents caused by falls.

The present study was a 3-year (2016 to 2018) prospective trial focusing on non-fatal accidents caused by falls during mountain hiking in Tyrol (Austria). All subjects gave their informed consent for inclusion before they participated in the study. The study was conducted in accordance with the Declaration of Helsinki 2013 and the protocol was approved by the Board for Ethical Questions of the University of Innsbruck (certificate of good standing 07/2016).

2.2. Selection of Included Accidents and Victims

The Austrian Alpine Police (part of the Ministry of the Interior) routinely documented accidents during mountain-sports activities in the Austrian Alps. During the summer season, this documentation included nearly all accidents and emergencies with an emergency call via the emergency call center or the local mountain rescue service and all fatalities that occurred in the Austrian mountains. Instructed staff of the Austrian Alpine Police was responsible for data input using standardized forms and the database was updated daily. The standardized forms include an identification number, the type of the mountain-sport activity, the location of the accident (e.g., federal province), a rough classification of the accident (e.g., fall, cardiovascular emergency, exhaustion etc.), demographic aspects of the victims, and a short description of the accident’s sequence of events. Names and addresses of the victims are not part of the database and remain in the documents of the Austrian Alpine Police to guarantee the anonymity of victims. This database provided the primary source for the selection of the accidents relevant for this study.
The Austrian Board of Alpine Safety had access to the database of the Austrian Alpine Police for regular national accident reports. For the present study, the Austrian Board of Alpine Safety selected accidents, which fulfilled the following criteria: (1) non-fatal, (2) located in the federal province Tyrol (without east Tyrol), (3) categorized to the activity ‘hiking/mountaineering’, and (4) categorized to the type ‘fall’ during the summer seasons (May 1st to October 31st) each year. Data of the selected accidents and the victims were extracted from the database and transmitted to the Department of Sport Science (University Innsbruck) each week for further analyses.
In the next step, only victims of full age and with permanent residence in Austria or Germany were included. This procedure was due to organizational reasons of sending prepared questionnaires in the German language including a stamped return envelope to the victims (see below) and should not have resulted in a relevant selection since nearly 90% of the victims in the Austrian Alps are Austrian or German nationality [13]. Additionally, the short description of the accidents sequence of events and the location were checked to decide if the accident happened during mountain hiking or during another activity classified as ‘hiking/mountaineering’ by the Austrian Alpine Police. Thereby, according to the definition of mountain hiking, high-altitude mountaineering (e.g., accidents during a glacier traverse), and other activities (e.g., accidents during hunting or mushroom collecting) were excluded. Subsequently, all cases fulfilling the inclusion criteria were selected and corresponding victims were defined as potential study participants.
On a weekly basis, the Austrian Alpine Police was informed about the identification numbers of the selected cases in order to send the study documents in print form to the victims by mail. The study documents included an information letter about the study goals and the cooperating institutions, a participant information and consent form, and the questionnaire for data acquisition (details see below). The persons were asked to give written informed consent, to fill in the questionnaire, and to send both back to the Department of Sport Science using the stamped return envelope. Only returned questionnaires with the signed consent form were included for subsequent procedures. Returned questionnaires were checked in order to see if the accidents fulfilled the criteria (i.e., mountain hiking as activity and accident primary caused by a fall) for final inclusion into the study. A fall-related accident was accepted when the person slipped, stumbled, or twisted during mountain hiking (e.g., falls during a stay on a mountain hut were not accepted) which consequently resulted in a fall. In case of missing or ambiguous responses in the questionnaire, study participants were contacted by e-mail or phone to complete data from the questionnaire. This procedure was applied and has been proven in previous studies [2]. The flow chart in Figure 1 illustrates the procedure of accident inclusion, participant responses, and selection of the final sample size included into analyses.

The questionnaire was based on our previous studies [2] and additionally on other studies in mountain sports [14]. Expert interviews were used to construct items that could not be adopted from validated published questionnaires. A pilot project in mountain hikers (n = 50) was conducted during the summer season 2015 to validate the questionnaire, to improve clarity, and to facilitate statistical analysis before starting the main evaluation.
The questionnaire included the following details:

Victims of non-fatal falls in mountain hiking are markedly older than the general population of mountain hikers and are often afflicted by visual impairments. Therefore, defective vision, eventually in combination with or without the use of a visual aid, could play a major role in falls during mountain hiking. Therefore, mountain hikers should regularly check their visus and if necessary, the degree of their visual aid. Hikers with defective vision should take care, especially during downhill walking. The present data did not identify a special type of boot that is frequently worn by victims of falls and therefore, the potential importance of the type and the characteristics of shoes remains unclear. Further evaluations should focus on the identification of risk factors to derive evidence-based recommendations for the prevention of falls in mountain hikers. 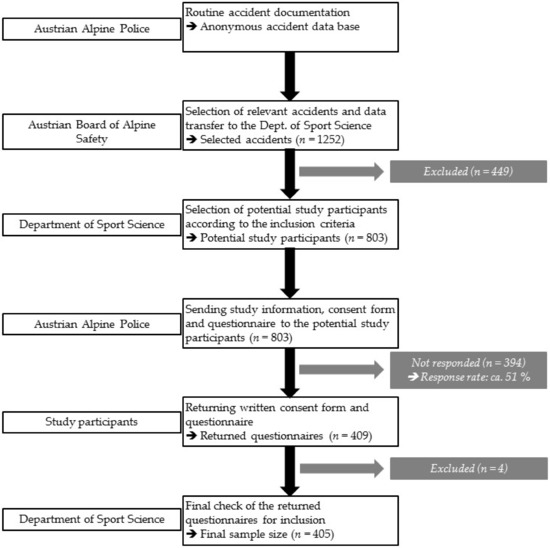 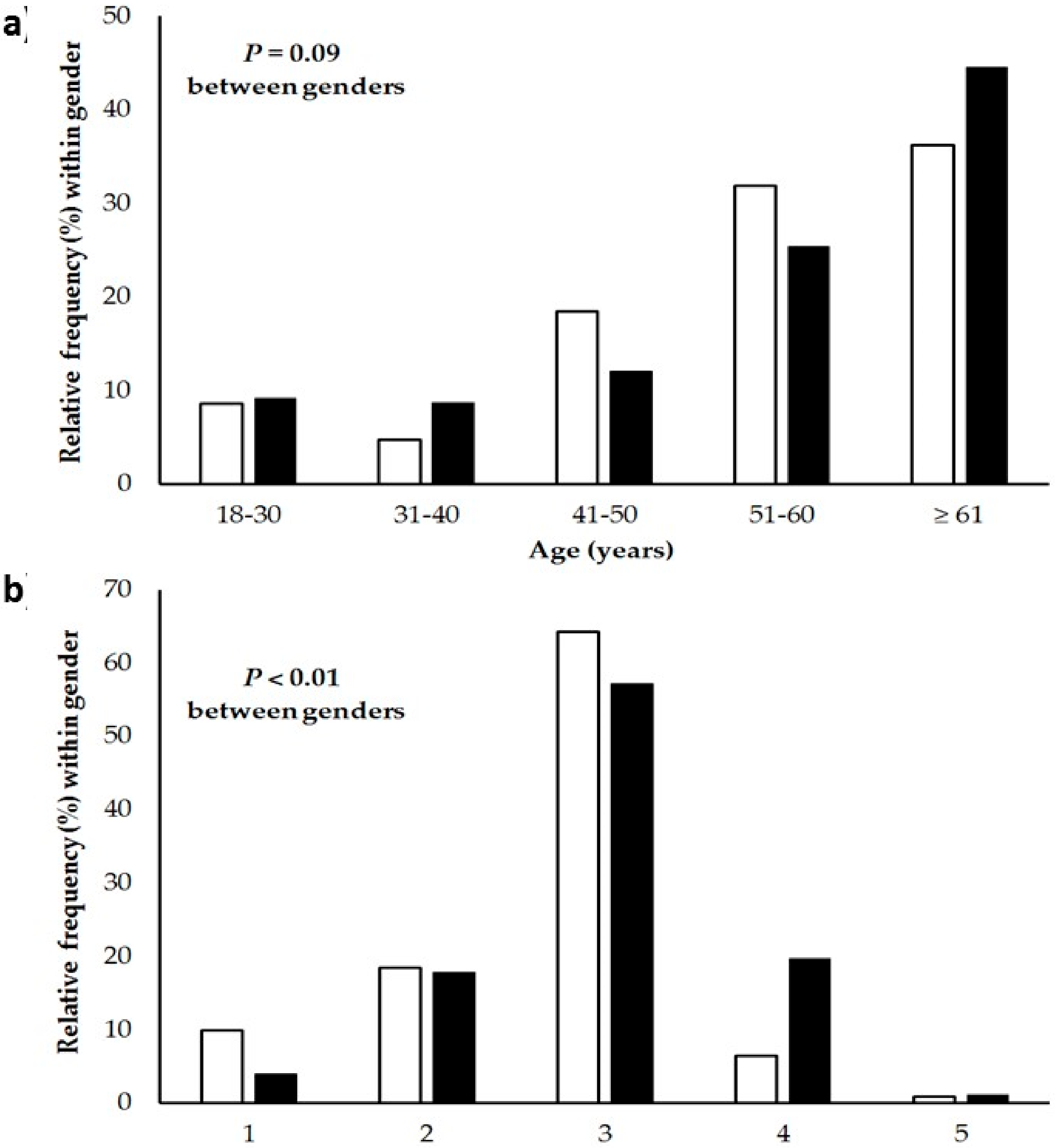 Table 1. Characteristic of the victims and circumstances of the accident.
Table 1. Characteristic of the victims and circumstances of the accident.
Values are means ± SD or absolute (relative) frequencies for the total sample and separated for female and male victims. Sample size varies due to incomplete data (n = 391–405 for the total sample size, n = 224–232 for females, n = 167–173 for males). p-value refers to differences between female and male victims. * Breaks/fluid intake/alcohol consumption during the tour at which the accident happened. ** Subjective level of fatigue at the time the accident happened.
© 2020 by the authors. Licensee MDPI, Basel, Switzerland. This article is an open access article distributed under the terms and conditions of the Creative Commons Attribution (CC BY) license (http://creativecommons.org/licenses/by/4.0/).
We use cookies on our website to ensure you get the best experience. Read more about our cookies here.
Accept
We have just recently launched a new version of our website. Help us to further improve by taking part in this short 5 minute survey here. here.
Never show this again