Stakeholder Analysis and Social Network Analysis in the Decision-Making of Industrial Land Redevelopment in China: The Case of Shanghai
Previous Article in Journal

Predictors of Plasma Fluoride Concentrations in Children and Adolescents

Excess fluoride intake during tooth enamel formation can result in dental fluorosis, a permanent discoloring of the tooth enamel [1]. Numerous studies also indicate that fluoride exposure during early brain development is associated with cognitive deficits in children [2,3,4,5,6]. Little is known, however, about the contribution of diet and other factors that may increase fluoride intake in U.S. children.
Since 1945, fluoride has been added to municipal water in many U.S. cities to prevent dental caries; however, foods, beverages, and fluoridated toothpaste may also contribute to total fluoride intake in children and adolescents. Fluoride can be found into a wide variety of foods and beverages if the items are manufactured (e.g., cereal, soft drinks) or prepared (e.g., pasta, juice prepared from concentrate, coffee, tea) with fluoridated water [7]. Other mechanisms of fluoride uptake are specific to certain foods and beverages [8]. For example, tea plants preferentially uptake or hyperaccumulate fluoride from the soil [9]. Grapes may be treated with cryolite [10]—a pesticide that decomposes to fluoride ion—and processed meats can have fluoride-rich bone particles introduced during mechanical deboning [11]. The use of fluoridated toothpaste may be another important source of fluoride exposure, particularly for young children who swallow it [8,12].
A contemporary assessment of factors influencing total fluoride intake in children and adolescents is critical for determining optimal levels of municipal water fluoridation, particularly in populations vulnerable to adverse health effects of fluoride exposure. Here, we explore associations of demographics, drinking water, diet, and oral health behaviors with plasma fluoride in a nationally representative sample of 6 to 19-year-old U.S. children and adolescents.

In a population of 6–19-year-old U.S. children, we found recent intake of green or black tea and fluoridated tap water to be strongly associated with plasma fluoride. Given the relatively high prevalence of tea consumption in this population, regulatory agencies should consider fluoride intake from green or black tea consumption when developing thresholds for the optimal amount of water fluoridation. In addition, populations with higher plasma fluoride concentrations (e.g., young children and boys) may want to consider limiting green and black tea intake. Finally, the ongoing monitoring of teas sold in the U.S. to identify teas with very high or low fluoride concentrations would improve recommendations to consumers, particularly those with high tea intake.

This research was funded by NATIONAL INSTITUTES OF HEALTH, grant numbers K23ES024803 and R01ES030101 and the Maine Economic Improvement Fund. 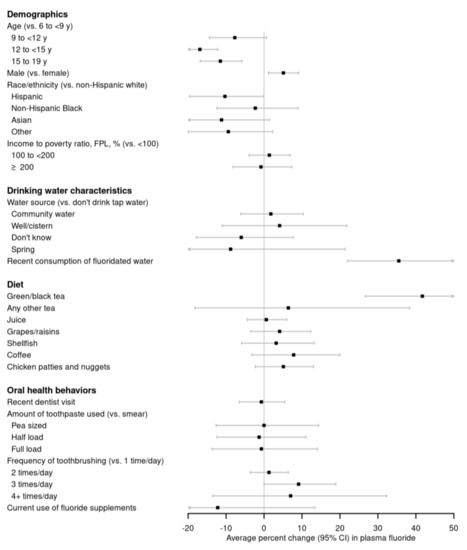 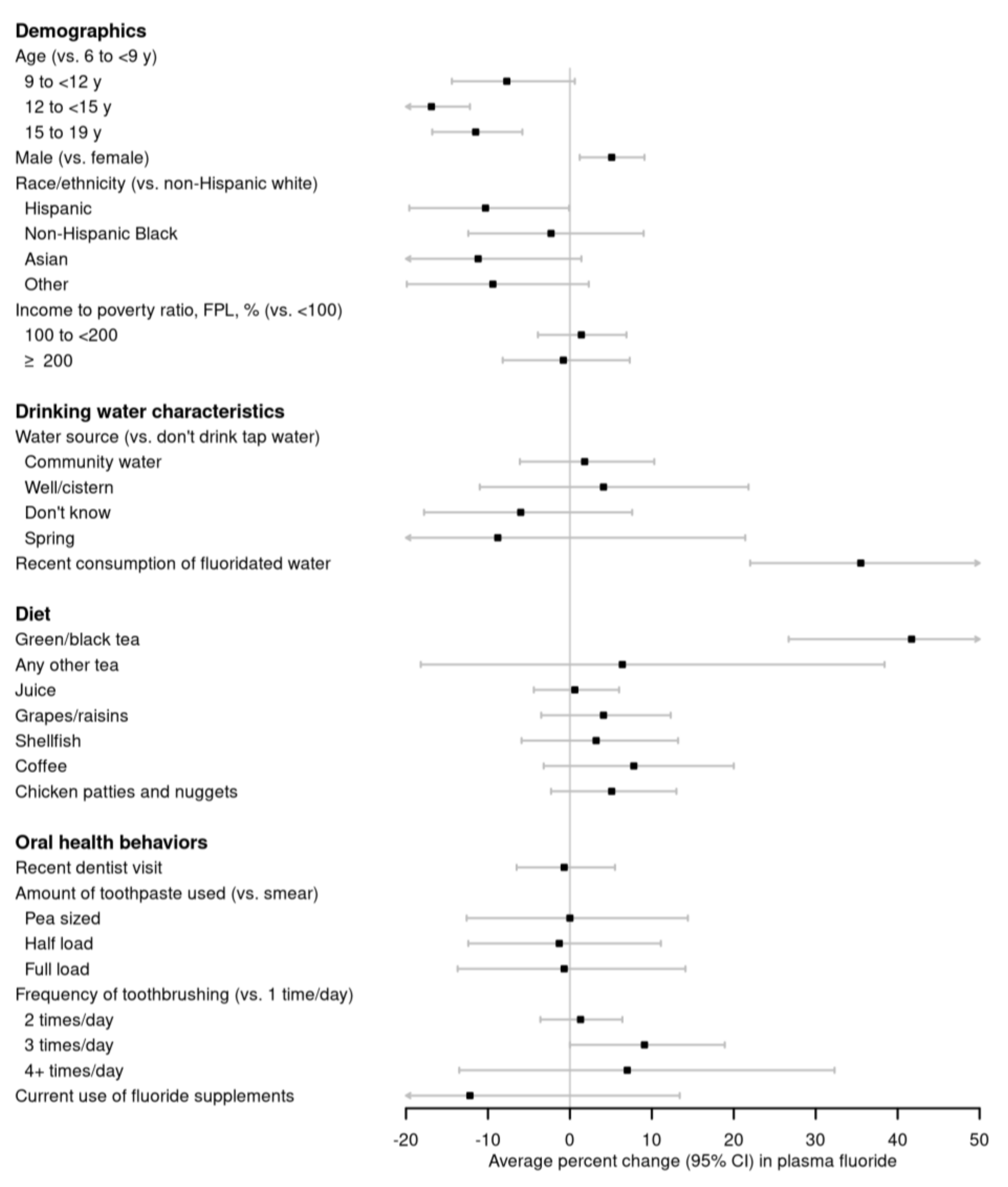 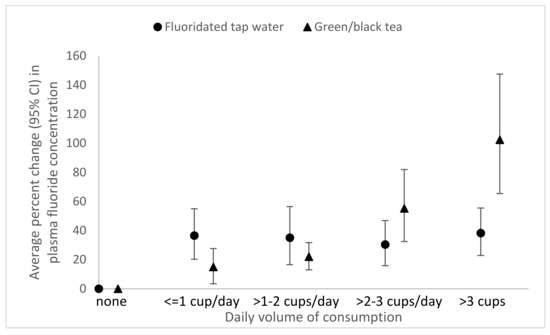 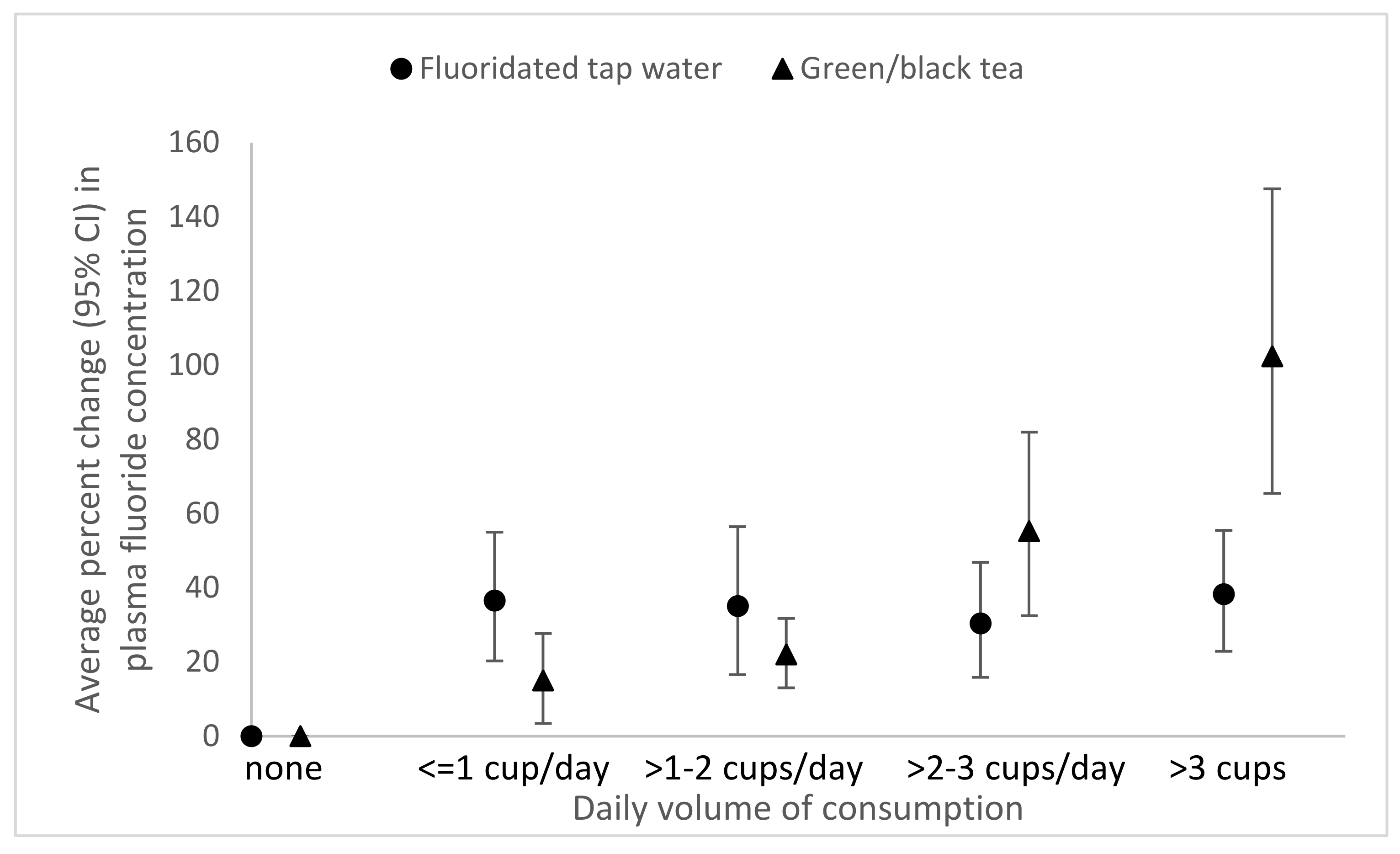