Public Awareness of and Action towards Heart Attack Symptoms: An Exploratory Study
Next Article in Special Issue

:
The aim of this work was to evaluate the effectiveness of a 12-week-long balance training program on the postural control of elite male beach volleyball players and the effect on balance when swapping to specific sports training in the sand in the following 12 weeks. Six elite players were tested before and after the balance training program and also 12 weeks after the balance training had finished. To this aim, a pressure platform was used to collect the following center of pressure parameters: path length, speed, mean position, and root-mean-square amplitude in the medial-lateral and anteroposterior planes. Romberg quotients for the center of pressure parameters were also calculated. The results of the present study showed better static postural control after specific balance training: smaller path length and speed under open eyes condition in dominant (p = 0.015; p = 0.009, respectively) and non-dominant monopedal stances (p = 0.005; p = 0.004, respectively). Contrastingly, 12 weeks after the balance training program, the path length and speed values under open eyes condition in bipedal stance increased significantly (p = 0.045; p = 0.004, respectively) for sand training. According to our results, balance training is effective to achieve positive balance test scores. It is speculated, and yet to be proven, that sand training could be effective to improve dynamic and open eyes postural control during beach volleyball practice. In beach volleyball players, a balance training program is effective to develop static balance but the effect of ecological sand training on dynamic performance deserves specific investigation.
Keywords:
athletes; posturography; core; stability; proprioception

We studied three elite international beach volleyball teams, six players (age 23.6 ± 3.3 years, height 188.2 ± 7.9 cm, body mass 77.7 ± 13.1 kg, BMI 22.3 ± 2.6 kg/m2, body fat 8.9 ± 2.5% (measured with a Tanita BC-545N body composition analyzer), professional experience 4.9 ± 1.8 years, predominance of arm and leg, right and left, 6/0). Three players played in the blocker position and the other three played in the defense position. The requirements to participate in the present study were to have competed in the national winter league and the National Circuit “Madison Beach Volley Tour” for three years, to have competed during at least the last year in international championships, and previous experience with balance training. A power analysis using G*3-Power (Heinrich Heine Universität, Düsseldorf, Germany) [31] indicated that this sample size provided 80% power to detect effects of d = 0.6 (medium effect) in a repeated measurement test with α = 0.05. The Ethics Committee at the University of Alicante gave institutional approval to this study, in accordance with the Declaration of Helsinki (UA-2018-12-19), with the consent of athletes duly informed of the procedure and parts of the study.

A baropodometric platform (FreeMed, Rome, Italy) was used for the stabilometric analyses, with an active surface of 400 × 400 mm, 8 mm thickness and a sample frequency of 100 Hz. The test was carried out three times with two minutes rest between trials. Stabilometric parameters were assessed three times and the average value was registered. The reference stabilometric values to express deviation of the center of pressure (CoP) were: path length, defined as the length of the total distance of the CoP over the course of the trial duration; speed, defined as total distance traveled by the CoP over time. It is suggested that increases in TE represent a decreased ability by the postural control system to maintain balance. Similarly, increases in CoP velocity could indicate a decreased ability to control posture [32]. Four displacement parameters were also measured regarding the average absolute displacements around the mean CoP: medial-lateral plane, anteroposterior plane, root-mean-square amplitude in medial-lateral plane, and root-mean-square amplitude in anteroposterior plane. The Romberg test was measured for 30 s in the following positions: bipedal stance with eyes open, bipedal stance with eyes closed, dominant monopedal stance with eyes open, dominant monopedal stance with eyes closed, non-dominant monopedal stance with eyes open, and non-dominant monopedal stance with eyes closed [14,33,34]. Traditional Romberg quotients for the CoP parameters were also calculated (eyes closed/eyes open) [35] as an indicator of proprioceptive and visual field contribution to postural stability [36,37]. A Romberg quotient higher than 1.0 denotes a greater postural sway during eyes closed condition [35]. The test order (positions and deprivation conditions) were randomized.
Data collection was initiated after the players were stable in an erect position on the baropodometric platform. The players remained barefoot and positioned with the feet facing forward. The distance between feet was considered according to the hip width. The arms remained relaxed and parallel to the body and the head faced forward. The players were asked to remain in this position during the evaluation process.

The conventional warm-up consisted of dynamic stretching and moderate aerobic exercises before the regular practice sessions. The time spent to perform balance training did not include the warm-up. The coach conducted the sessions and gave feedback on exercise techniques. Each 20 min session consisted of circuit training with 10 exercises (30 s work/30 s rest between exercises) and 1 min rests between circuits (two laps). Based on previous studies [17,39], the balance training consisted of performing static and dynamic exercises in which the participant’s equilibrium was more compromised and the exercises gradually progressed in complexity. In some exercises, the vision of the subject was totally or partially limited, so it was a challenge mainly for the core zone. The exercises were performed in monopedal and bipedal stances and auxiliary materials such as scales coordination, medicine balls, or unstable materials were used to create perturbations. The set of 10 exercises was as follows: bilateral squat on a BOSU ball (one for each leg) and two-hand bump using the wall; single-leg standing on inflated disk progressing to closed eyes execution; lateral medicine ball throwing on a BOSU ball (one for each leg); supine straight leg bridge on a Swiss ball; coordination scale and single leg squat; banded triplanar toe taps progressing to closed eyes execution; paloff press with a slight rotation progressing to monopedal stance; plank with elbows on a Swiss ball progressing to closed eyes execution; on a BOSU ball (one for each leg) the player used the Swiss ball to knock the beach volleyball ball to the coach; attack reception while standing with one or both legs on a BOSU ball; lunge on foam surface progressing to closed eyes execution. The main goal was to make the exercises as similar as possible to the real game actions [40], so that they could be transferred to beach volleyball.

Descriptive statistics (means and standard deviations), the distribution of normality (Kolgomorov–Smirnov and Lilliefors test), and Levene homogeneity tests were calculated for each stabilometric value. A repeated-measures ANOVA was conducted to compare postural control variables between baseline level, post-balance training, and post sand with post hoc comparisons using the Bonferroni test. A value of p < 0.05 was used to identify statistically significant differences. The percentage variation was calculated using the following formula: (Post-Test − Pre-Test)/Pre-Test × 100. Cohen’s d was used as a measure of the effect size of differences between tests and interpreted according to Cohen’s thresholds as small (0.00 ≤ 0.49), medium (0.50 ≤ 0.79), and large (≥ 0.80) [41]. Analyses were performed using the Statistical Package for Social Sciences v.22 (IBM, Armonk, NY, USA).

This study was supported by a pre-doctoral grant (ACIF/2018/209) from the Generalitat Valenciana, Spain. 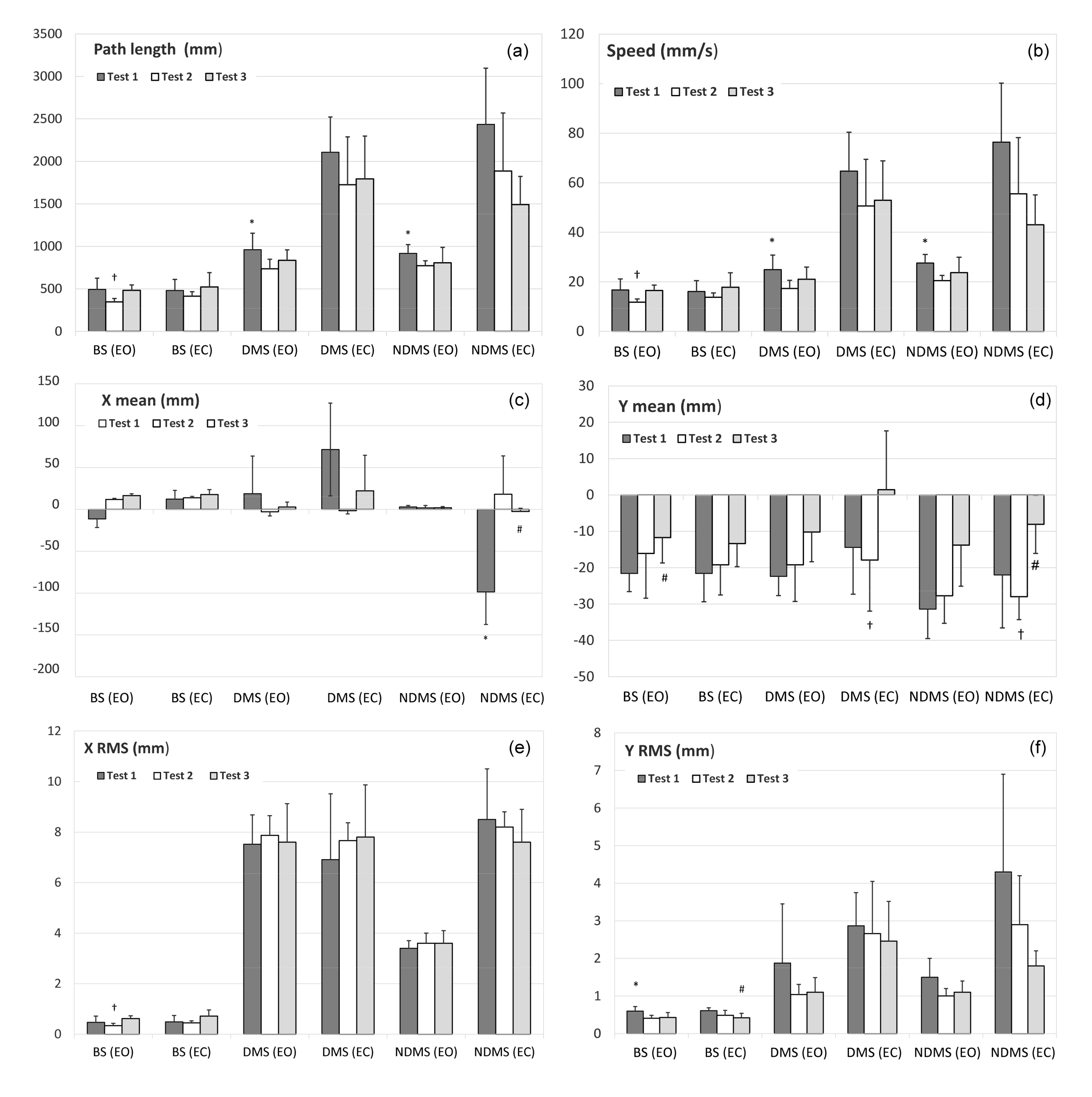