The Consumption of Sweets and Academic Performance among Mongolian Children

Previous studies have reported that a lower intake of energy-dense, nutrient-poor foods (such as sweets and candy) is associated with better academic performance [1]. Many studies on this topic have been conducted in developed countries including the US [2,3,4,5,6,7], Iceland [8,9], the UK [10], Norway [11] and Korea [12]. The study conducted in the UK, for example, reported a negative correlation between junk food consumption prior to school entry and academic achievements; this was explained by the negative effect of low nutrition quality upon cognitive outcomes [9]. Similar results were found among American children and this was explained by the effect of a high fat diet upon cognitive function [2].
The population segments consuming unhealthy foods differ between developed and developing countries. According to the nutrition transition theory, economic development and urbanization are associated with distinct changes in nutrition patterns among different population segments [13]. As a by-product of economic growth and integration, westernized dietary patterns (the consumption of processed foods, high sugar/high fat foods, sugar-sweetened beverages and fast food) have spread across the globe including to developing countries [14]. Initially, those with higher incomes living in urban areas start consuming westernized foods [13]; this trend continues until the knowledge of nutrition spreads across higher socioeconomic status (SES) groups who then begin to adopt a more prudent dietary pattern [13]. At this point, the consumption of highly processed food begins to shift downward to lower SES population segments [13].
Given these differing patterns of unhealthy food consumption, findings from developed countries may not be directly applicable to developing countries. More specifically, in developed countries, people from lower SES backgrounds are more likely to consume unhealthy foods such as sugar-sweetened beverages [15]; thus, SES can be a confounder between food consumption and academic performance. While the aforementioned previous studies [2,3,4,5,6,7,8,9,10] have adjusted their results for SES-related factors (e.g., parental income and education), such statistical adjustments do not necessarily guarantee their ability to extrapolate their findings to developing countries. On the other hand, in developing countries people with a higher SES are more likely to consume calorie-dense foods [16] than in developed countries such as the US [17]; however, few studies have evaluated the association in developing countries [18].
Mongolia is among the developing countries in the middle of the nutrition transition with children in urban areas consuming more sweets than those in rural areas [19]. It would be informative to investigate the relationship between the consumption of sweets and academic performance in such a country. This study aimed to investigate the association between the consumption of sweets and the academic performance of children in Mongolia.

This study was conducted using cross-sectional data from a longitudinal survey of schoolchildren in the capital of Mongolia, Ulaanbaatar. The original purpose of the survey was to collect maxillofacial morphological data from the general population of Mongolian children, inspect the association of these data via socioenvironmental and genetic factors and compare the results with data from Japan to reveal the cause of malocclusion [20,21]. The survey was conducted in two public schools, the biggest in each of the two largest districts in Ulaanbaatar (i.e., Bayanzürkh and Songino Khairkhan). Children in the first and second classes for each grade between four and ten were included in the survey. Further details concerning the survey have been reported elsewhere [20,21]. This study was approved by the Ethical Review Board of the Mongolian National University of Medical Science (No. 13-12/1A) and Tokyo Medical and Dental University (No. D2013-071). Informed consent for this study was obtained from caregivers and children. Consent to linking to the academic performance of participating children was obtained using the opt-out procedure and the collected records were anonymized for analysis.
Figure 1 shows the flowchart used to select participants for the study. Out of the 1540 students from all selected classes, 193 were excluded because we could not obtain informed consent (response rate: 87.5%). Of the remaining 1347 students, 324 were excluded due to the lack of information and omitted from the dataset before this analysis was conducted. In addition, information on academic performance or the consumption of sweets was missing for 84 and 152 participants, respectively, resulting in 787 students being included in the analysis.

The final grades for students provided by schools at the end of the school year were used as academic performance data. In Mongolia, all public schools have the same criteria for marking students, which were established by the government; marks are assigned from 0 to 100 with 60 being the passing mark. Among 20 subjects studied by the selected students across various grades, mathematics and the Mongolian language were studied at all grades; thus, they were selected as targets for the present study. For the purpose of this analysis, marks were standardized for each school grade for ease of comparison across different grades.
Students were asked to report on the frequency with which they consumed 25 food items (listed in Appendix A) over the previous month by choosing one of the following options for each item: “never had that food within the past month”, “consumed less than once a week”, “consumed once a week”, “consumed 2 to 3 times a week”, “consumed 4 to 6 times a week”, “consumed once a day”, “consumed twice a day” and “consumed more than three times a day”. Sweets were defined as snacks mainly containing sugar such as candies or chocolates; however, no food examples were provided in the questionnaire. Thus, the types of food considered to be sweets might have differed between children. This variable was dichotomized by the median (eat every day or less than every day) in the presented regression analysis.
Several other factors relevant to both academic performance and dietary habits were also evaluated by the questionnaire. Parents were asked to choose among the following six categories to indicate their household average monthly income: ≤200,000 tögrögs, 210,000–500,000 tögrögs, 510,000–800,000 tögrögs, 810,000–1,000,000 tögrögs, 1,000,000–1.8 million tögrögs and >1,800,000 million tögrögs (100,000 tögrögs ≈ 34 USD at the time of writing). For the purpose of this analysis, these categories were merged into three: <500,000 tögrögs, 500,000–1,000,000 tögrögs and >1,000,000 tögrögs. The education level of mothers was reported to be in one of the following five categories: never received a formal education, elementary or junior high school, high school graduate, vocational college and college graduate or higher. This variable was merged into three categories: primary school, secondary school to vocational college or college graduate and higher. The regularity with which students ate breakfast was assessed according to the following categories: never, sometimes and every day. Physical activity, apart from physical education classes at school, was categorized as occurring never, once a week, two to three times a week, four to six times a week and every day. Student mental health was evaluated using the strengths and difficulties questionnaire (SDQ) [22], which was used in a previous study to screen emotional and behavioral problems among Mongolian adolescents [23]. The SDQ score was categorized into the following bands: ≤15 (close to average), 16–19 (slightly high) and ≥20 (high). The body mass index (BMI) of the students was calculated from their heights and weights measured in schools with clothes on but without shoes. The BMI was used as a continuous variable in this analysis.

The association between the consumption of sweets and academic performance was evaluated using multiple linear regression analysis. To consider potential confounders, the following three models were constructed through the sequential addition of covariates: a crude model (Model 1); a model adjusted for gender, BMI, household income, mother’s education, regularity of eating breakfast, SDQ score and physical activities (Model 2) and a model further adjusted for dietary habits reported to be associated with academic performance such as the consumption of junk food (instant noodles, chips, juice) [1], vegetables [1], fruits [1] and milk [5] (Model 3). Two meat items frequently consumed in Mongolia, mutton and beef, were also adjusted in Model 3. The table in Appendix A shows the correlation between the consumption of sweets and other food items. Missing information concerning covariates was imputed using the mice R 3.6.0 software (The R Foundation for Statistical Computing, Vienna, Australia) package. Ten multiple imputations were performed using the classification and regression trees (CART) method [24]. P-values below 0.05 were considered to indicate a statistical significance. All analytical stages except multiple imputation were performed using Stata v.14 (StataCorp LP, College Station, TX, USA).

3.2. Association between the Consumption of Sweets and Mathematics Scores

Table 2 shows the association between the consumption of sweets and academic scores in mathematics. According to the crude model (Model 1), children who consumed sweets every day had significantly higher scores in mathematics (coefficient: 0.15; 95% confidence interval (CI): 0.01–0.29); however, this model did not largely explain the variation in the mathematics score (adjusted R squared: 0.01) and the association became insignificant after adjusting for gender, BMI, mother’s education, breakfast, SDQ, exercise (Model 2; coefficient: 0.12; 95% CI: –0.02–0.26) and consumption of other foods (Model 3; coefficient: 0.15; 95% CI: –0.02–0.32). Small portions of the variation in the mathematics score were explained by these models (adjusted R squared: 0.08 and 0.06, respectively); according to Model 3, being male, higher BMI, a higher SDQ score and a habit of consuming vegetables every day was significantly associated with lower scores in mathematics. The variance Inflation Factor (VIF) calculated from Models 2 and 3 did not suggest multicollinearity (all VIFs < 2).

3.3. Association between the Consumption of Sweets and Mongolian Language Score

5. Limitations and Recommendations for Future Research

First, while the data on the students’ academic performance were validated by the schools, food consumption data were self-reported. We divided the consumption of sweets variable by its median (eat every day or less than every day) to obtain a sufficient number of respondents in each group. Thus, we were unable to assess the dose-response relationship. Second, causal inferences cannot be drawn because this was a cross-sectional study with a small sample size. As we excluded children for whom information on academic performance and the consumption of sweets was lacking, the results might be biased. However, it was difficult to speculate upon whether the results were over- or underestimated because, of the 236 children excluded from the analysis, 218 lacked information on the consumption of sweets. Third, our results may also not be generalizable to rural areas in Mongolia or other developing countries. The participants were not asked about their place of residence, meaning that their SES could not be assessed precisely. Finally, only mathematics and the Mongolian language were considered in this study; academic scores in other subjects and the children’s non-cognitive skills are yet to be studied. Further research is needed to investigate the different associations found for mathematics and Mongolian language scores.

The present study suggests that previous studies linking the consumption of sweets and academic performance may have been weakly confounded by SES. Our data were collected from Mongolia, a country in the midst of the nutritional transition to a more developed world pattern. The consumption of sweets was positively associated with academic scores in Mongolian language classes but the association with mathematics scores was not statistically significant. Thus, the findings of the present study must be carefully interpreted. Accurate measurement of household SES should help further understand the association between food intake patterns and academic performance. 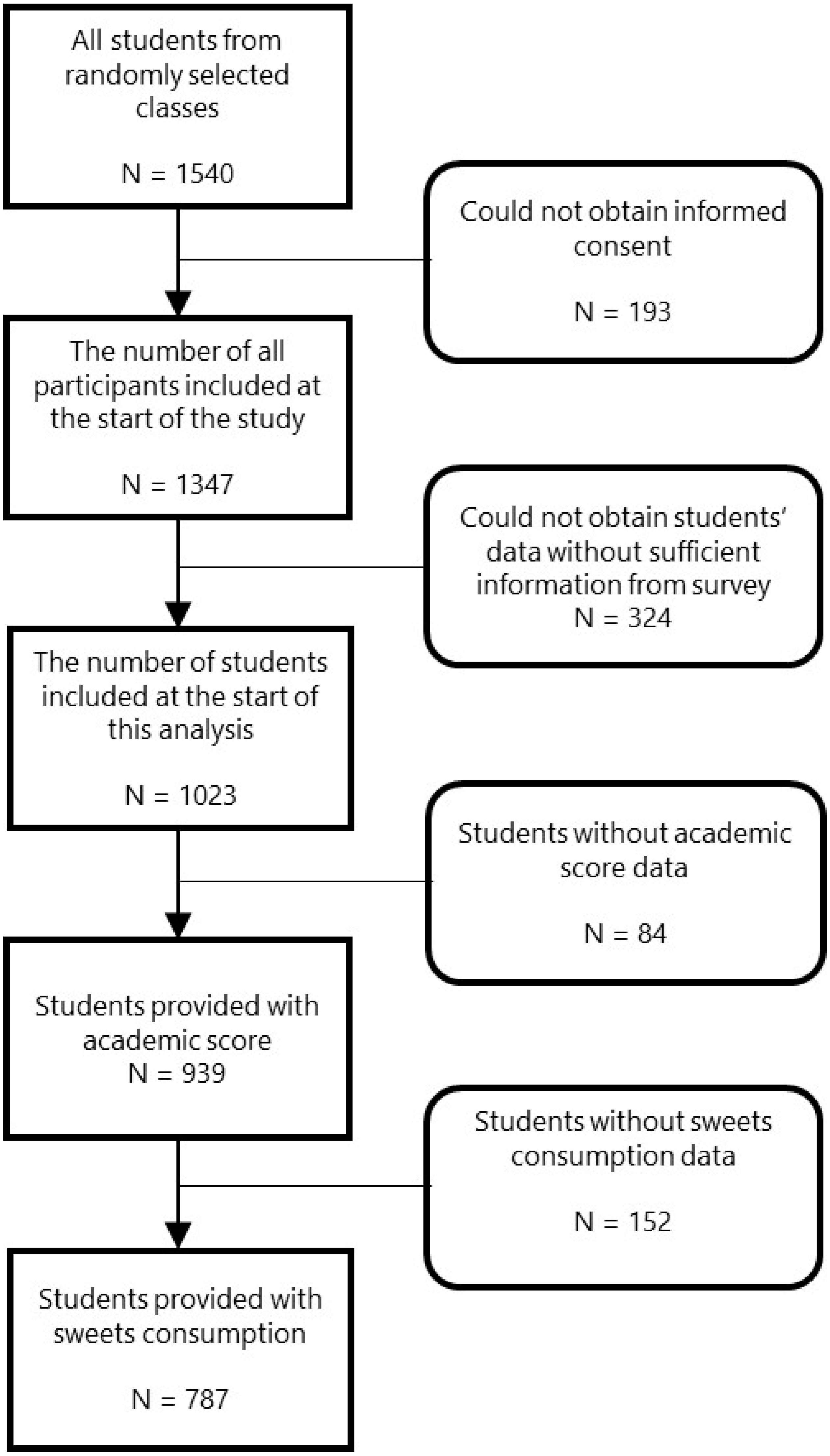