Factors Associated with the Psychological Health of Caregiving Older Parents and Support from Their Grown Children: Results from the China Health and Retirement Longitudinal Study
Previous Article in Journal

Identifying Children with Developmental Coordination Disorder via Parental Questionnaires. Spanish Reference Norms for the DCDDaily-Q-ES and Correlation with the DCDQ-ES

Does the Great Recession Contribute to the Convergence of Health Care Expenditures in the US States?

This paper examines whether the Great Recession has altered the disparities of the US regional health care expenditures. We test the null hypothesis of convergence for the US real per capita health expenditure for the period 1980–2014. Our results indicate that the null hypothesis of convergence is clearly rejected for the total sample as well as for the pre-Great Recession period. Thus, no changes are found in this regard. However, we find that the Great Recession has modified the composition of the estimated convergence clubs, offering a much more concentrated picture in 2014 than in 2008, with most of the states included in a big club, and only 5 (Nevada, Utah, Arizona, Colorado and Georgia) exhibiting a different pattern of behavior. These two estimated clubs diverge and, consequently, the disparities in the regional health sector have increased. View Full-Text
Keywords: great recession; health care expenditures; long-term; convergence analysis; Phillips-Sul great recession; health care expenditures; long-term; convergence analysis; Phillips-Sul
►▼ Show Figures 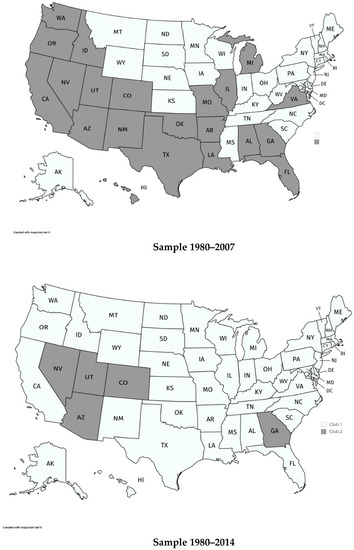 Clemente, J.; Lázaro-Alquézar, A.; Montañés, A. Does the Great Recession Contribute to the Convergence of Health Care Expenditures in the US States? Int. J. Environ. Res. Public Health 2020, 17, 554.


Clemente J, Lázaro-Alquézar A, Montañés A. Does the Great Recession Contribute to the Convergence of Health Care Expenditures in the US States? International Journal of Environmental Research and Public Health. 2020; 17(2):554.


Clemente, Jesús; Lázaro-Alquézar, Angelina; Montañés, Antonio. 2020. "Does the Great Recession Contribute to the Convergence of Health Care Expenditures in the US States?" Int. J. Environ. Res. Public Health 17, no. 2: 554.