Hydrogeochemical Characteristics and Conceptual Model of the Geothermal Waters in the Xianshuihe Fault Zone, Southwestern China
Previous Article in Journal

As a consequence of ongoing rapid economic development and expanding urbanization, increasingly large amounts of waste are being discharged into the soil. Among these wastes, heavy-metal pollutants, which are well known as high bioaccumulation, recalcitrant, and toxic, are particularly serious [1,2,3]. Heavy metals can enter into the human body via the food chain, posing serious threats to the environment and human health. Therefore, it is essentially important to remove and control the heavy metals from contaminated soil for its remediation, which has become an urgent problem to be solved around the world [4,5].
Compared with the conventional soil remediation methods, phytoremediation is regarded as an environmentally-friendly, low-cost, highly efficient method; most importantly, it causes less disturbance to the environment [6,7]. Phytoextraction, as one of the commonly used phytoremediation techniques, is based on the principle that toxic and harmful substances are transported from contaminated soil to plant shoots via absorption from the roots of the plant and then removed by harvesting the plants [8,9,10,11,12]. In the Cantabrian Mountains of southern Spain, areas contaminated by heavy metals from slag have been remediated by means of phytoextraction [13]. As a means of potentially enhancing the efficacy of phytoextraction, chelation-enhanced phytoextraction technology, which promotes the activation of heavy metals from the surface of soil particles into the soil by adding chelating agents, has been widely recognized by the majority of scientific research workers [14,15].
Commonly used chelating agents can be divided into three categories. The first is aminopolycarboxylic acids (APCAs), such as ethylenediaminetetraacetic acid (EDTA), diethylenetriaminepentaacetic acid (DTPA), S,S-ethylenediamine disuccinic acid (S,S-EDDS), aminotriacetic acid (NTA), and l-glutamic acid, N,N-bis (carboxymethyl) glutamic acid (GLDA) [16,17]. These chelating agents have a strong ability to complex Pb and Cd, and consequently promote plant uptake [18,19]. The second is natural low molecular weight organic acids (NLMWOAs), including CA (citric acid), OA (oxalic acid), and AA (acetic acid) [20]. The third is surfactants such as RH (rhamnose) [21]. To date, it has been established that numerous chelating agents exhibit different degrees of activation for lead (Pb), cadmium (Cd), copper (Cu), and zinc (Zn), and other heavy metals [22,23,24].
Red soil is a typical type of soil in the south of China with high iron oxide content and low organic matter content, which has a great impact on chelate activation for heavy metals from contaminated soil. Red soil areas are also one of the main distribution areas of non-ferrous metal mines, where heavy metal pollution (such as Pb and Cd) caused by mining is widespread. Moreover, acid rain is a typical climatic feature in the region of south China. At present, there are few systematic studies on the activation characteristics of heavy metal pollution in red soil and the effect of acid rain on activation [25]. In addition, thallium (Tl)-contaminated soil, caused by the excavation activities of non-ferrous metal mines, is also a typical pollution type. Although Tl is a very toxic element, there is relatively rare research on chelating-enhanced phytoextraction for Tl [26,27].
In this study, the preliminary, dynamic and equilibrium activation experiments were conducted to screen typical chelating agents (three types of nine chelating agents EDTA, EDDS, NTA, DTPA, GLDA, OA, CA, AA, and RH), and the effects of chelating agents dosage and pH conditions on the activation of Pb-, Cd-, and Tl-contaminated red soils was systematically investigated. Furthermore, combining with heavy metal speciation analysis, the mechanism of heavy metal activation was investigated, which provided potential application for selecting appropriate chelating agents for chelate-assisted phytoremediation of heavy metals in red soil.

The soil samples used in this study were collected from the forest top red soil (0–20 cm, red soil) near a pyrite area (22°59′25.5″ N, 112°00′40.5″ E) in Yunfu, Guangdong Province, China. Soils were dried under natural conditions. The dried soils were screened to remove large pieces of plant debris and stones, crushed, sieved through a 4-mm nylon sieve, boxed, and preserved for further use. The physicochemical properties of the soil sample determined in our previous study [28] are listed in Table 1.

In order to simulate heavy metal pollution in red soil, we artificially added CdCl2·2.5H2O, Pb(NO3)2, and TlNO3 to the prepared soil to further prepare Pb-, Cd-, and Tl-contaminated soils with 1000, 10 and 10 mg/kg, respectively. The contaminated soils underwent cycles of wetting (70% field capacity) and drying (air-drying) for 60 days to obtain a geochemical equilibration.

EDTA, DTPA, EDDS, NTA, OA, CA, AA, and RH were all of analytical grade and were purchased from Zhiyuan Chemical Reagent Co., Ltd. (Tianjin, China), whereas GLDA was purchased from TCI Chemical Co., Ltd. (Shanghai, China). Solutions of all nine chelating agents were prepared separately at a concentration of 7.5 mmol/L.

2.2.2. Influence of Chelating Agent Dosage and Solution pH on the Activation Effect of Heavy Metals

To assess the influences of the dosage of chelating agents and pH environment conditions on the activation effect, we designed different dosages of chelating agents to the red soils contaminated with Pb, Cd, and Tl, fixed the activation time when activation reaches equilibrium (known as the equilibrium activation experiment), and observed the equilibrium activation effects of heavy metals under two pH conditions (4 and 6.5, representing acid rain and non-acid rain, respectively). The specific procedure was as follows.
Different volumes (1.0, 2.0, 3.0, 4.0, 5.0, 6.0, 7.0, and 8.0 mL) of the typical chelating agent solutions selected from the previous experiment were added into the centrifuge tubes, and the solution pH was adjusted to either 4 or 6.5. The remainder of the procedure was the same as that described in Section 2.2.1. Each group of experiments was performed three times in parallel for a total of 288 groups. The activated soil was filtered and dried and left for sequential heavy metal speciation analysis.

2.2.3. Determination of Heavy Metal Speciations before and after Activation

For each of the three types of contaminated soils, a typical chelating agent was selected to examine the speciation changes of heavy metals before and after activation in the experiment. The specific procedure used was as follows.
We used a modified BCR three-step sequential extraction method [33] to determine the speciation of heavy metals before and after soil activation using the following four steps: (1) To examine the exchangeable fraction, we weighed 0.5 g of soil into a 50-mL centrifuge tube in which was added 20 mL 0.11 M acetic acid (pH = 2.8). The tubes were then shaken in a water bath at 25 °C for 16 h, followed by centrifugation at 3500× g for 15 min. The resulting supernatant was taken out, and subsequently added to 10 mL of deionized water, followed by shaking for 15 min to ensure that there was no residual sticky soil, and then the centrifugation was repeated and the supernatant collected. After repeating this procedure, the resulting supernatant was made up to a final volume of 10 mL. (2) To examine the reducible fraction, we took the residue from Step 1 and added 20 mL of 0.5 M hydroxylamine hydrochloride (pH = 1.5). After shaking and centrifugation, the subsequent procedures were the same as those described in Step 1. (3) To examine the oxidizable fraction, we took the residue from Step 2 and added 5 mL of hydrogen peroxide (pH = 2.2), shaken at 25 °C for 1 h, opened the lid and steamed at 85 °C. Thereafter, we added 5 mL of hydrogen peroxide, tightened the lid, and heated for 1 h in a water bath at 25 °C, and then opened the lid to dryness in 85 °C, cooled to room temperature, and added 25 mL of 1 M ammonium acetate (adjusted to pH = 2.0 with nitric acid). (4) The residual fraction was calculated as the difference between the pseudo-total concentration of heavy metal (Pb, Cd or Tl) extracted with aqua regia digestion and the sum of heavy metal concentrations in the three fractions described above.

The data were analyzed and plotted using the Origin software package. Data are presented as the means ± standard deviation (mean values ± SD). All data means were compared using an analysis of variance (T-test, p < 0.05).

3.2. The Effect of Chelating Agent Dosage and Solution pH on Heavy Metals Activation

3.3. Speciation Characteristics of Heavy Metals before and after Activation 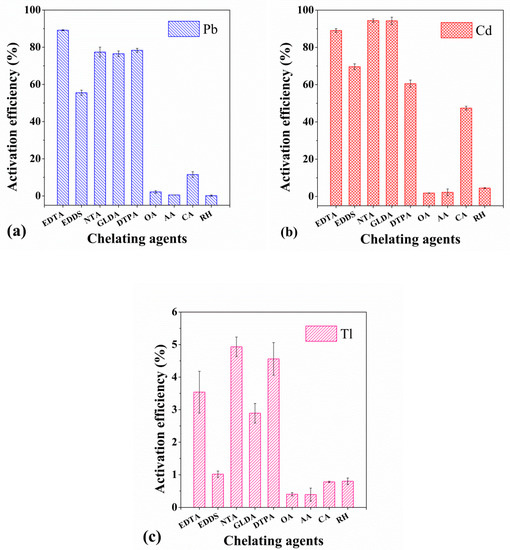 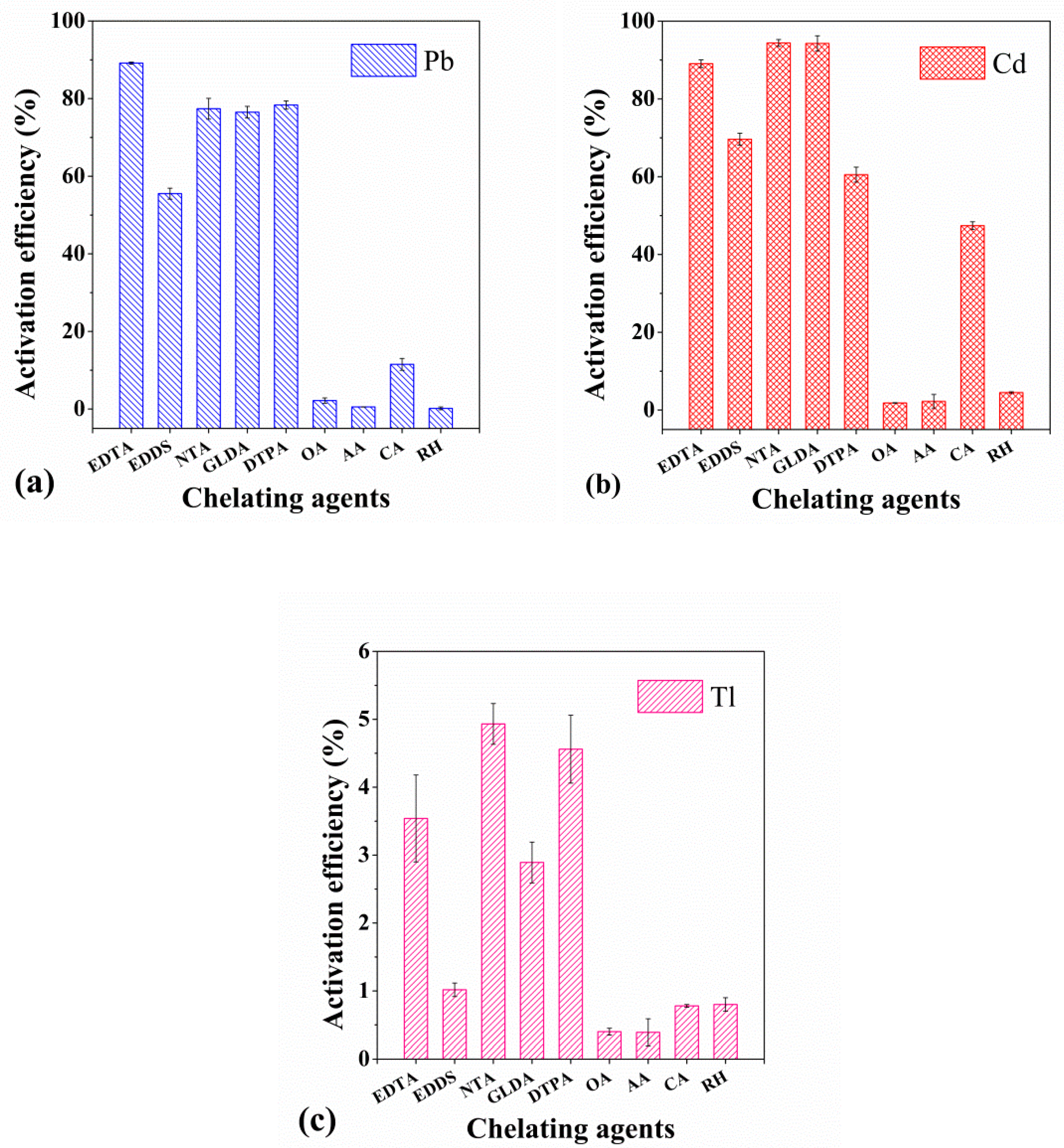 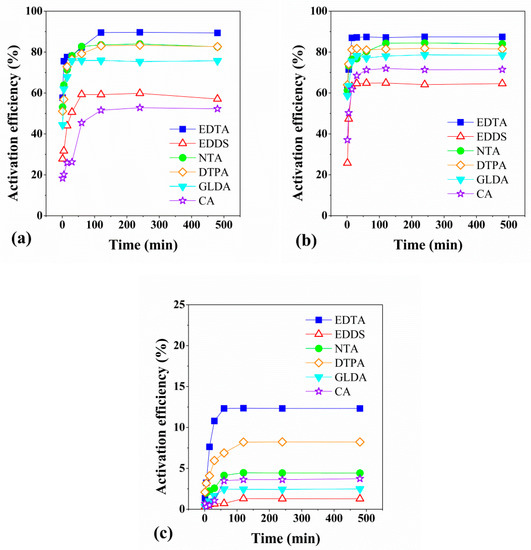 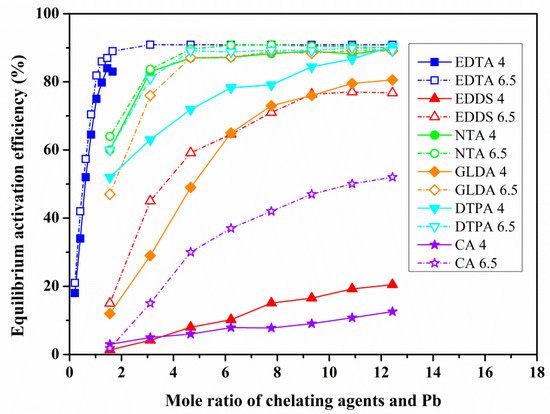 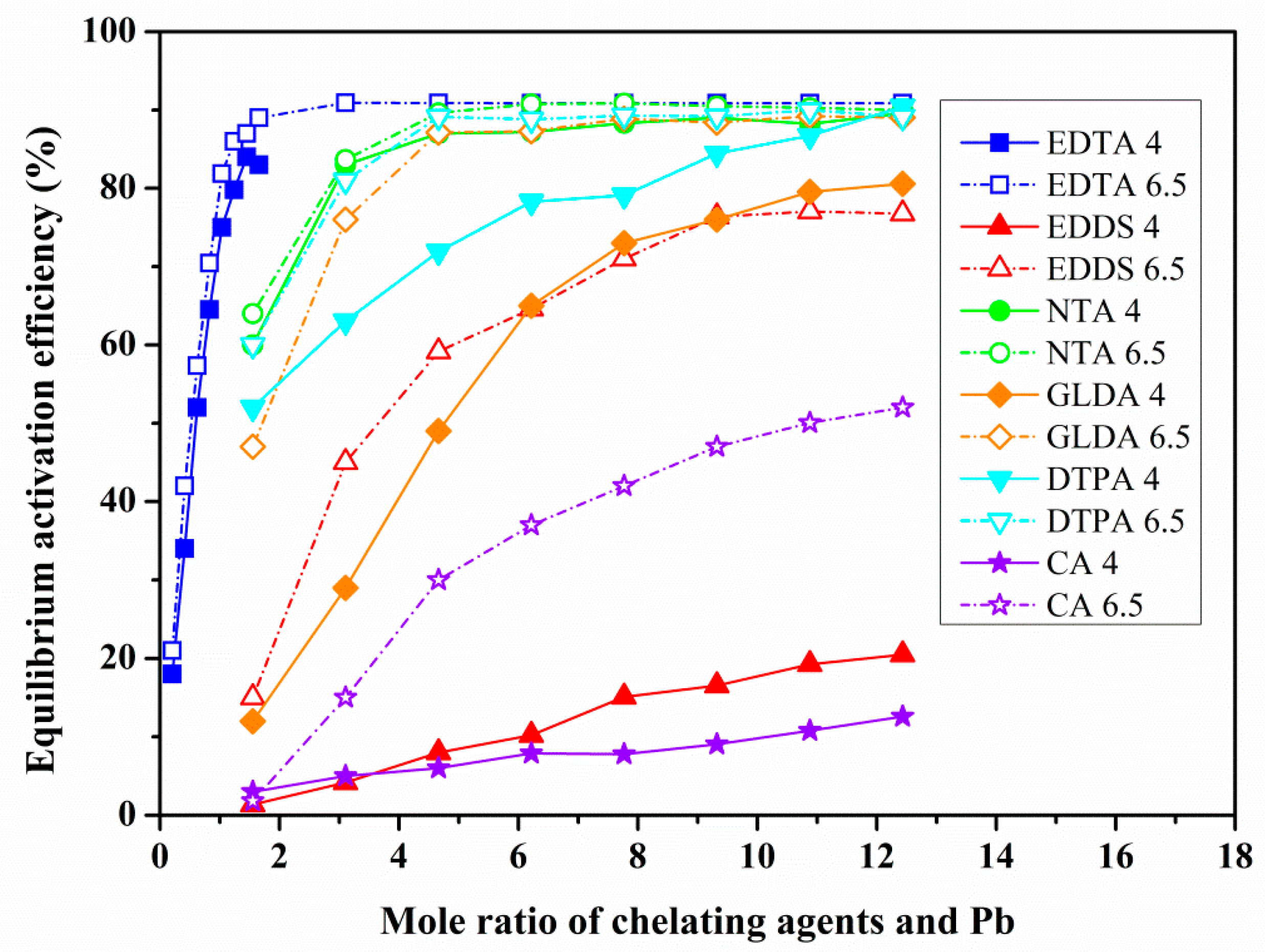 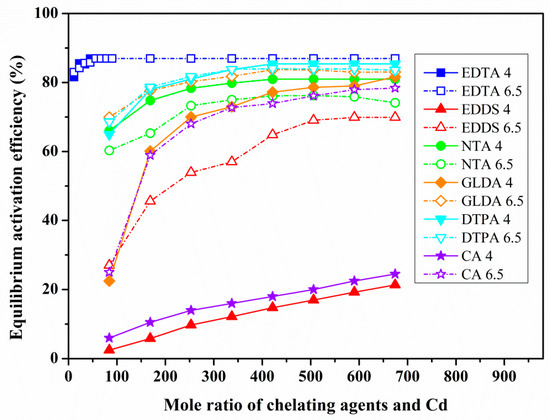 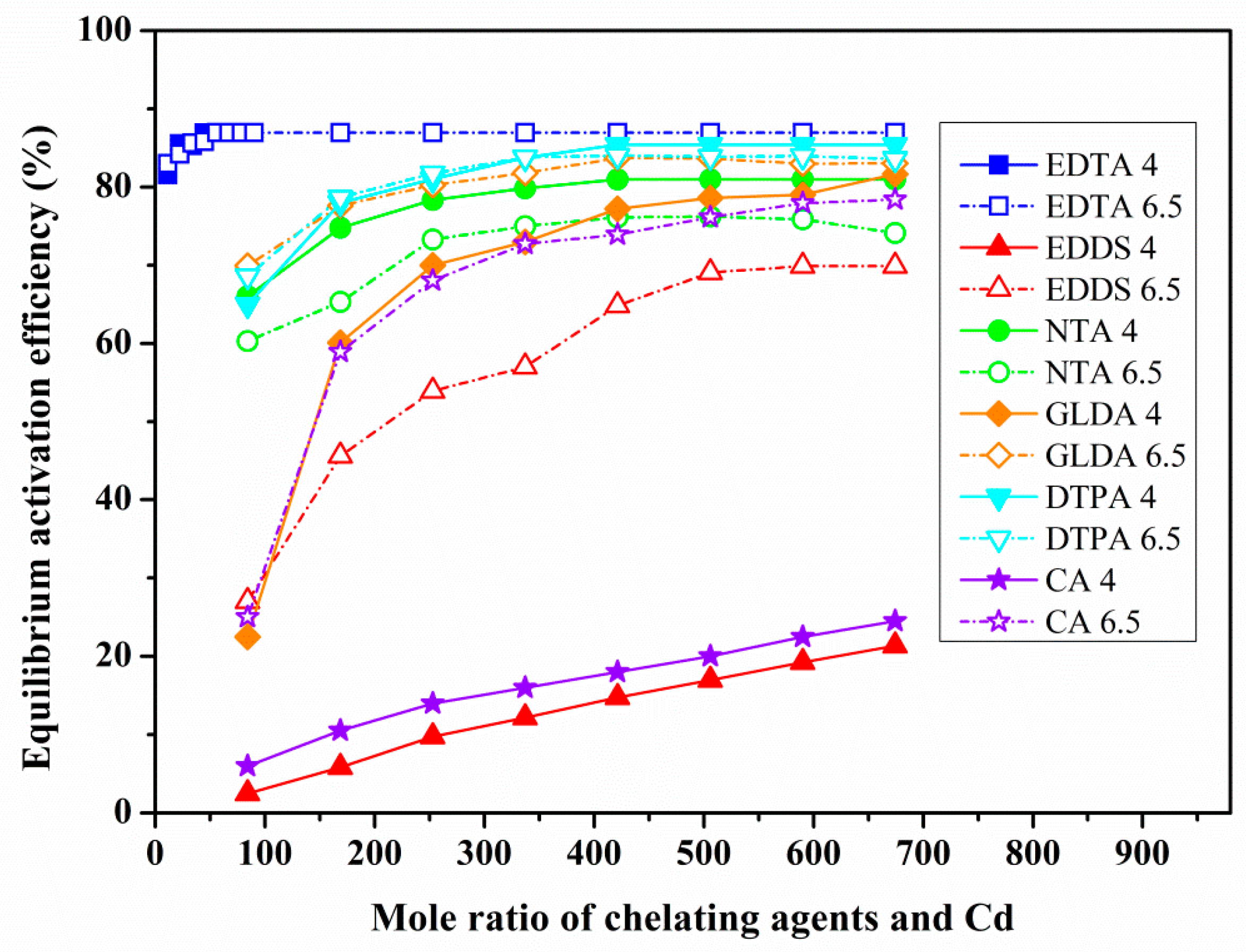 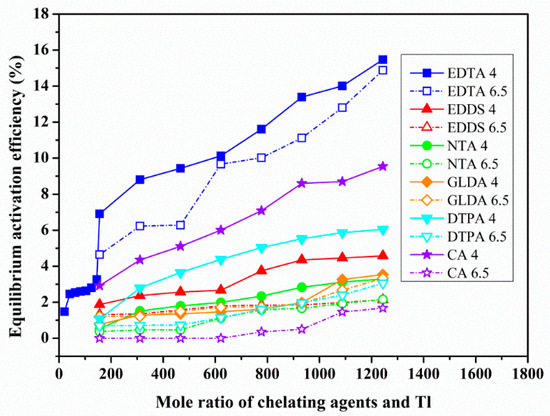 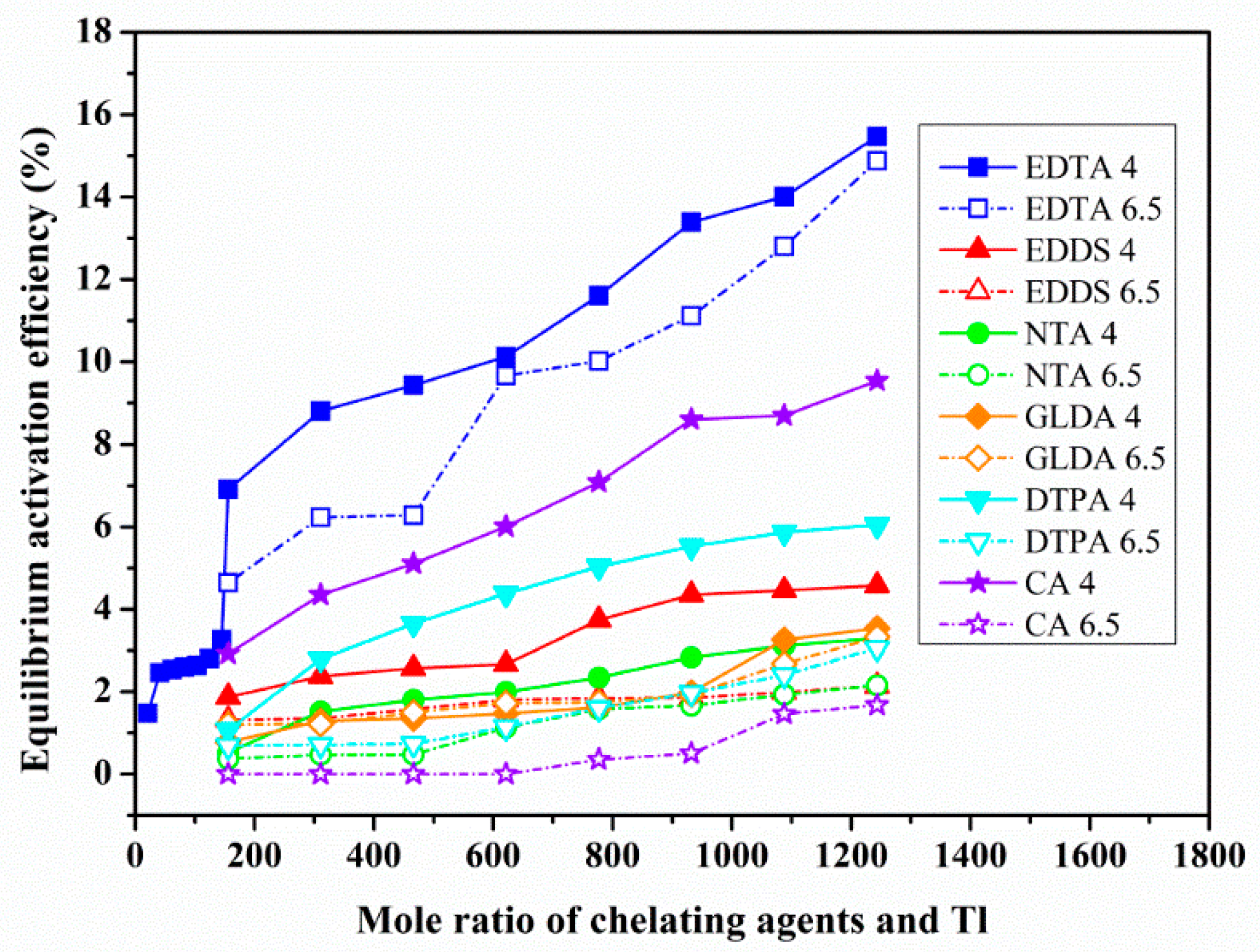 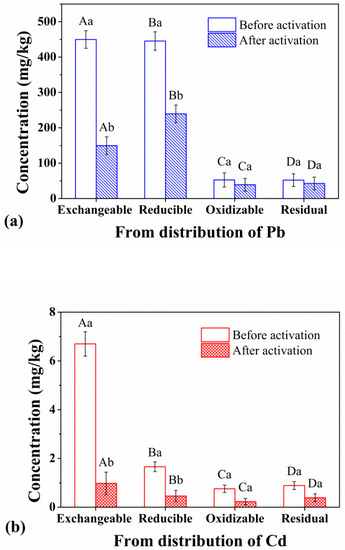 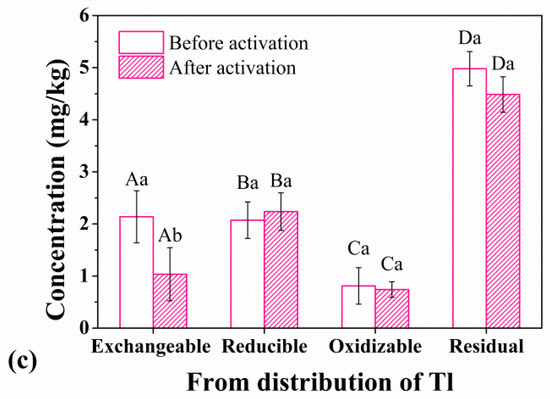 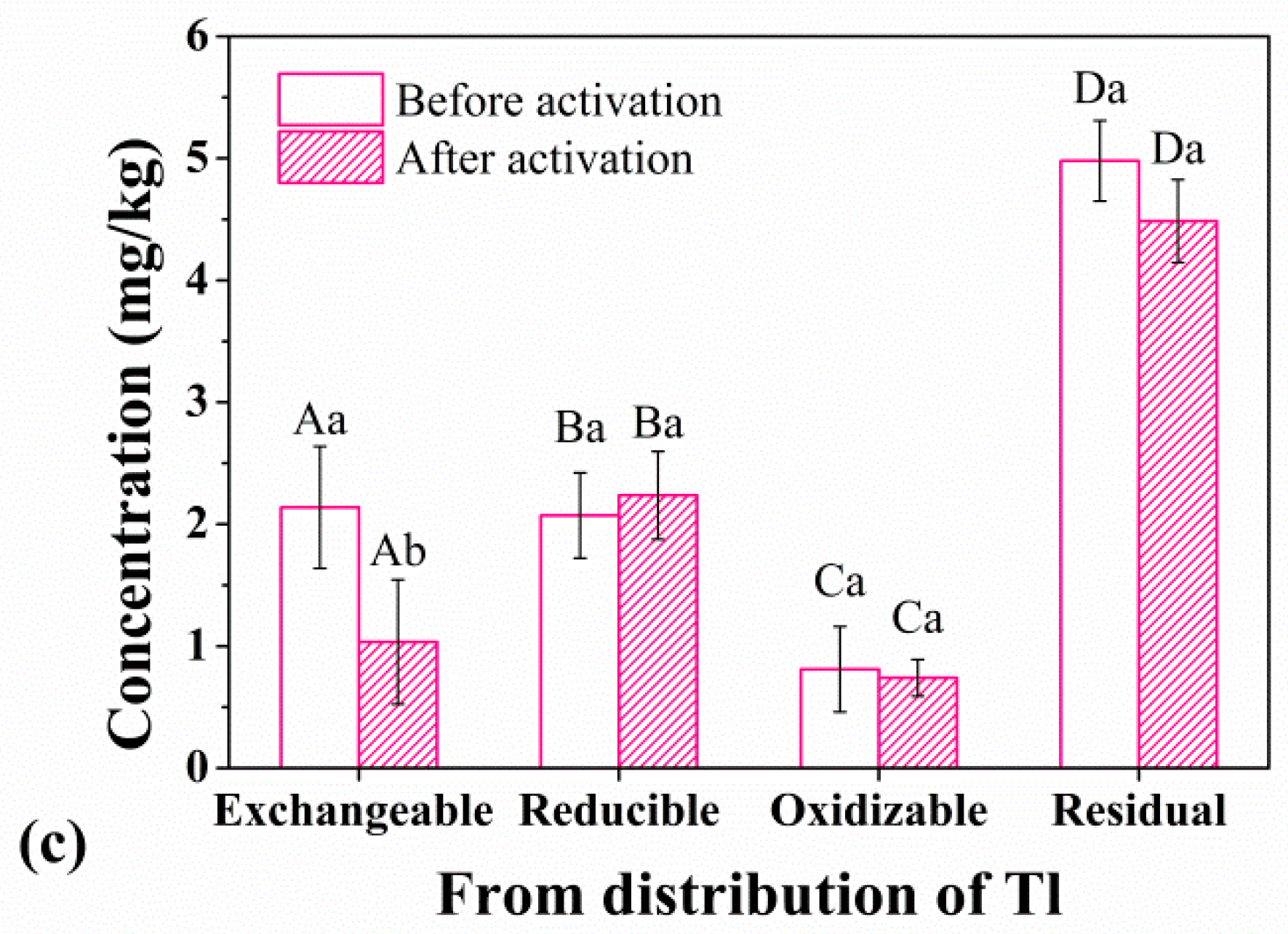 Table 1. Physiochemical properties of red soil.
Table 1. Physiochemical properties of red soil.
© 2020 by the authors. Licensee MDPI, Basel, Switzerland. This article is an open access article distributed under the terms and conditions of the Creative Commons Attribution (CC BY) license (http://creativecommons.org/licenses/by/4.0/).
We use cookies on our website to ensure you get the best experience. Read more about our cookies here.
Accept
We have just recently launched a new version of our website. Help us to further improve by taking part in this short 5 minute survey here. here.
Never show this again