Breastfeeding in the Community—How Can Partners/Fathers Help? A Systematic Review
Previous Article in Journal

Rheumatoid arthritis (RA) is a chronic autoimmune of an unknown etiology. Air pollution has been proposed as one of the possible risk factors associated with disease activity, although has not been extensively studied. In this study, we measured the relationship between exposure to air pollutants and RA activity. Data on RA patients were extracted from the Kuwait Registry for Rheumatic Diseases (KRRD). Disease activity was measured using disease activity score with 28 examined joints (DAS-28) and the Clinical Disease Activity Index (CDAI) during their hospital visits from 2013 to 2017. Air pollution was assessed using air pollution components (PM, NO, SO, O, and CO). Air pollution data were obtained from Kuwait Environmental Public Authority (K-EPA) from six different air quality-monitoring stations during the same period. Multiple imputations by the chained equations (MICE) algorithm were applied to estimate missing air pollution data. Patients data were linked with air pollution data according to date and patient governorate address. Descriptive statistics, correlation analysis, and linear regression techniques were employed using STATA software. In total, 1651 RA patients with 9875 follow-up visits were studied. We detected an increased risk of RA using DAS-28 in participants exposed to SO and NO with (95% CI: 0.0004–0.005, ) and (95% CI: 0.002–0.005, ), respectively, but not to PM, O, and CO concentrations. Conclusively, we observed a strong association between air pollution with RA disease activity. This study suggests air pollution as a risk factor for RA and recommends further measures to be taken by the authorities to control this health problem. View Full-Text
Keywords: air pollution; rheumatoid arthritis; DAS-28; CDAI; RA registry; KRRD; Kuwait; Middle East; AQI air pollution; rheumatoid arthritis; DAS-28; CDAI; RA registry; KRRD; Kuwait; Middle East; AQI
►▼ Show Figures 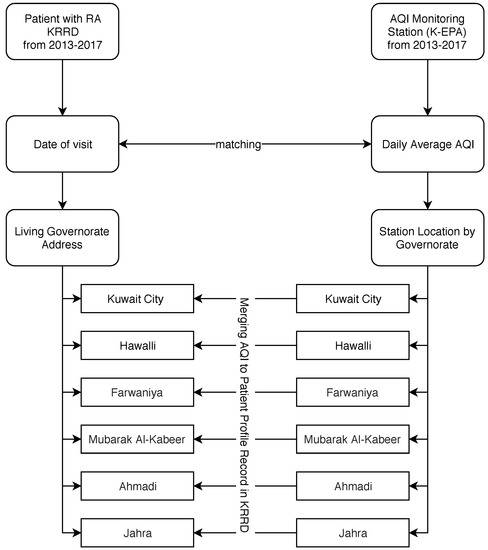