Attitudes of Mainstream and Special-Education Teachers toward Intellectual Disability in Italy: The Relevance of Being Teachers
Previous Article in Special Issue

(1) Background: The adverse health effect associated with extreme temperature has been extensively reported in the current literature. Some also found that temperature effect may vary among the population with different socioeconomic status (SES), but found inconsistent results. Previous studies on the socioeconomic vulnerability of temperature effect were mainly achieved by multi-city or country analysis, but the large heterogeneity between cities may introduce additional bias to the estimation. The linkage between death registry and census in Hong Kong allows us to perform a city-wide analysis in which the study population shares virtually the same cultural, lifestyle and policy environment. This study aims to examine and compare the high and low temperature on morality in Hong Kong, a city with a subtropical climate and address a key research question of whether the extreme high and low temperature disproportionally affects population with lower SES. (2) Methods: Poisson-generalized additive models and distributed-lagged nonlinear models were used to examine the association between daily mortality and daily mean temperature between 2007–2015 with other meteorological and confounding factors controlled. Death registry was linked with small area census and area-level median household income was used as the proxy for socioeconomic status. (3) Results: 362,957 deaths during the study period were included in the analysis. The minimum mortality temperature was found to be 28.9 °C (82nd percentile). With a subtropical climate, the low temperature has a stronger effect than the high temperature on non-accidental, cardiovascular, respiratory and cancer deaths in Hong Kong. The hot effect was more pronounced in the first few days, while cold effect tended to last up to three weeks. Significant heat effect was only observed in the lower SES groups, whilst the extreme low temperature was associated with significantly higher mortality risk across all SES groups. The older population were susceptible to extreme temperature, especially for cold. (4) Conclusions: This study raised the concern of cold-related health impact in the subtropical region. Compared with high temperature, low temperature may be considered a universal hazard to the entire population in Hong Kong rather than only disproportionally affecting people with lower SES. Future public health policy should reconsider the strategy at both individual and community levels to reduce temperature-related mortality.
Keywords: H-EDRM; climate change; extreme temperature; climate change; socioeconomic vulnerability; health disparities H-EDRM; climate change; extreme temperature; climate change; socioeconomic vulnerability; health disparities

The adverse effect of extreme temperature on human health has been intensively reported during the last decade [1,2]. Epidemiological evidence shows that both high and low temperature were associated with increased mortality and morbidity in western, Asian and African countries [3,4,5]. With the effect of climate change, extreme weather events are expected to be more frequent and intensive in the future, which may impose a significant health burden in the years to come [6]. Previous studies have also identified that temperature may pose different health impact to population with different characteristics, some risk factors related to the vulnerability of extreme temperature include pre-existing diseases, housing, behavior as well as socioeconomic status (SES) [7,8,9].
The association between health inequities and socioeconomic disparities have been well established [10,11,12]. A number of research revealed that such disparities were also existed for health effect induced by temperature [13,14]. Current research has shown inconsistent results on whether socioeconomic disadvantages were associated with higher temperature-related health risk, especially for cold weather [7,8,14,15]. Previous studies of such kind were mainly conducted by city or country-level comparison [8,16,17]. This may be problematic since other confounding factors such as lifestyle, behavior, temperature-related policy and acclimation are difficult to properly controlled. An intra-city analysis has advantages to minimize the effect of other confounding factors. This was rarely conducted in previously due to methodological challenges that SES data are often absent in retrospective health-related data in most countries.
In Hong Kong, the mortality registry can be lined with area-level census data, which provide an opportunity to perform such city-wide analysis in which the study population shares virtually the same cultural, lifestyle and policy environment. Hong Kong is a developed metropolis with one of the largest income disparities in the world. The Gini coefficient was reported to be 0.539 for original and 0.473 for after social benefit transfer and it continues growing in the last two decades [18]. The large income disparity gap provides a good example with which to investigate the modifying effect of SES on temperature. Many mortality and morbidity related to extreme temperature are predictable and preventable [19]. As highlighted in UNISDR Sendai Framework and WHO health emergency disaster risk management (Health-EDRM), understanding the health risk and vulnerable population are priorities to reduce the exposure and adverse health consequences that are associated with disaster and environmental hazards [20]. In this study, we aimed to (1) examine and compare morality risk associated with high and low temperature in the subtropical city and (2) to address a key research question of whether the extreme high and low temperature disproportionally affects population with lower SES.

Meteorological data including mean daily temperature, relative humidity and atmospheric pressure from 1 January 2007 to 31 December 2015 were obtained from Hong Kong Observatory, which is located at the center of the urban area. To adjust for the potential confounding effect of air pollution, daily mean air pollutant data including nitrogen dioxide (NO2), Sulphur dioxide (SO2), Ozone (O3) and particulate matter less than 2.5 μm aerodynamic diameter (PM2.5) of the same period were collected from the Hong Kong Environmental Protection Department. The daily air pollution variables were calculated by taking an average of ten general stations.

The corresponding daily non-accidental mortality data were collected from the Hong Kong Census and Statistics Department for analysis. The data also contain the cause of death, gender and age for stratified analysis. Cause of death was also analyzed which classified according to International Classification of Diseases, Tenth Revision (ICD-10) non-accidental (A00-T99, Z00-Z99), cardiovascular (I00-I99) and respiratory (J00-J98) diseases and cancer (C00-D48).

Several indictors have been chosen to reflect socioeconomic status (SES) in previous studies, including education, income, occupation, and race/ethnicity [7,14,21,22,23]. To further capture the multidimensional feature of SES, some studies used composite indices composed of multiple indicators to represent an individual’s socioeconomic advantage [24,25,26]. However, many of those indices were not officially adopted by local government, and aggregating SES may introduce additional bias when interpreting. In this study, we used a signal measure indicator, the median monthly household income (MHI) of a deceased person’s residential area, as a proxy to reflect the one’s socioeconomic status (SES). Income is the most widely used SES indicator, which directly and indirectly affects access to goods and services for health. In the 2011 Hong Kong census, the territory of Hong Kong was divided into 289 small areas, which are also known as Tertiary Planning Units (TPUs). To minimize issues regarding privacy, TPUs with a population less than 1000 were merged into the nearby TPUs to form 209 TPU clusters. One TPU was intentionally excluded due to the entire population within the area being prisoners, and therefore 208 TPU clusters were included in the final analysis. All TPU clusters were then grouped into four levels using the quartering method according to its MHI (52 TPU clusters in each group, where 1 indicates the group with highest SES and 4 is the lowest SES group), to evaluate whether there were differences in the effect of temperature on all non-accidental and cause-specific mortality (Figure 1). Each death record was linked with an SES group code according to his/her residential area by the TPU code.

Distributed lag linear and non-linear models (DLNM) were performed to determine the association between daily mortality and ambient temperature for each SES group. As daily mortality counts generally follow an overdispersed Poisson distribution, a distributed lag model with a quasi-Poisson regression was used to evaluate the health effect of heat and cold while adjusting for the temperature at different lag days. The model used the following formula: where α is the intercept; cb is the crossbasis matrix built up with dlnm() package in R; ns(): smoothing function using a natural cubic spline. A quadratic B-spline with three internal knots placed at the 10th, 75th and 90th percentiles of temperature was used to model the exposure–response relationship and a natural cubic spline was fitted with three internal knots placed equally spaced in the log scale to model the lag–response association [27]. 4 degrees of freedom (df) were used for potentially confounding metalogical and air pollutant variables. The model uses a maximum lag period of 21 days to capture the long delay of effects of cold and to exclude deaths that were advanced by only a few days (harvesting effect) [28,29]. The long-term and seasonality effect was controlled using 7 df per year. Day of the week (Dow) and local public holidays were also adjusted in the model. The Akaike Information Criterion for quasi-Poisson (Q-AIC) values were used for the choice of the degree of freedom.
The relationship between temperature and mortality was summarized as the exposure–response curve of relative risk (RR) accumulated across all lags. Minimum mortality temperature (MMT), with its 95% confidence interval (95% CI), was calculated. RR for total death and each SES group were estimated. Subgroup analyses for gender, age group (0–65 years and 65 years above) and cause-specific death (cardiovascular, respiratory and cancer) were performed. The results show that the MMTs for each subgroup analysis were close to 27 °C, so that was chosen as the fixed reference temperature to compare the temperature effect on each SES groups. Modelling choices were tested by a sensitivity analysis using different degrees of freedom for temperature and long-term trends, and length of maximum lag period. All analyses were performed using R project for statistical computing (version 3.6) packages dlnm and mgcv [30,31].

Hong Kong is a subtropical city with hot summer and mild winter. The mean and median daily mean temperature during the study period were 23.5 °C and 24.7 °C, with a range between 8.4 and 32.4 °C, respectively (Table 1). As a coastal city, the relative humidity is relatively high, with a median of 79%. Overall, 362,957 non-accidental deaths were included in the analysis after excluding cases without a valid TPU code (1.34%). There were more deaths in the lower SES group than higher SES in Hong Kong, with daily mortality ranging from 0 to 26 cases in the highest SES group and 14 to 192 cases in the lowest one (Table 2). Figure 1 shows the distribution of the TPU cluster by SES groups, of which the highest cluster (Deep Water bay, HK$178,000 or US$22,960/month) has reported 20 times higher median household income compared to the lowest (Tai O, HK$8000 or US$1031/month), indicating a large SES disparity among districts in Hong Kong.

Despite the fact that Hong Kong has a milder winter climate, the overall cold effect was found to be much stronger and last for a longer period than the heat effect on mortality in Hong Kong. The subpopulation with lower SES is more vulnerable to high temperature, but low temperature universally affects the entire population across all SES groups in Hong Kong. A higher cold effect was observed in groups with the highest SES, despite the different was not statically significant. The heat island effect is a risk factor for heat-related deaths, but it may provide a protective effect during cold weather. This study raises the concern of the health effect of low temperature in subtropical regions, which should be recognized as an important public health issue at territory level. Strategies on mitigating the cold effect should not only focus on populations with lower SES; additional public services should be provided for different socioeconomic classes in Hong Kong.

The authors would like to thank the Hong Kong Census and Statistics Department, the Hong Kong Observatory, and the Environmental Protection Department in Hong Kong for providing data for this study. 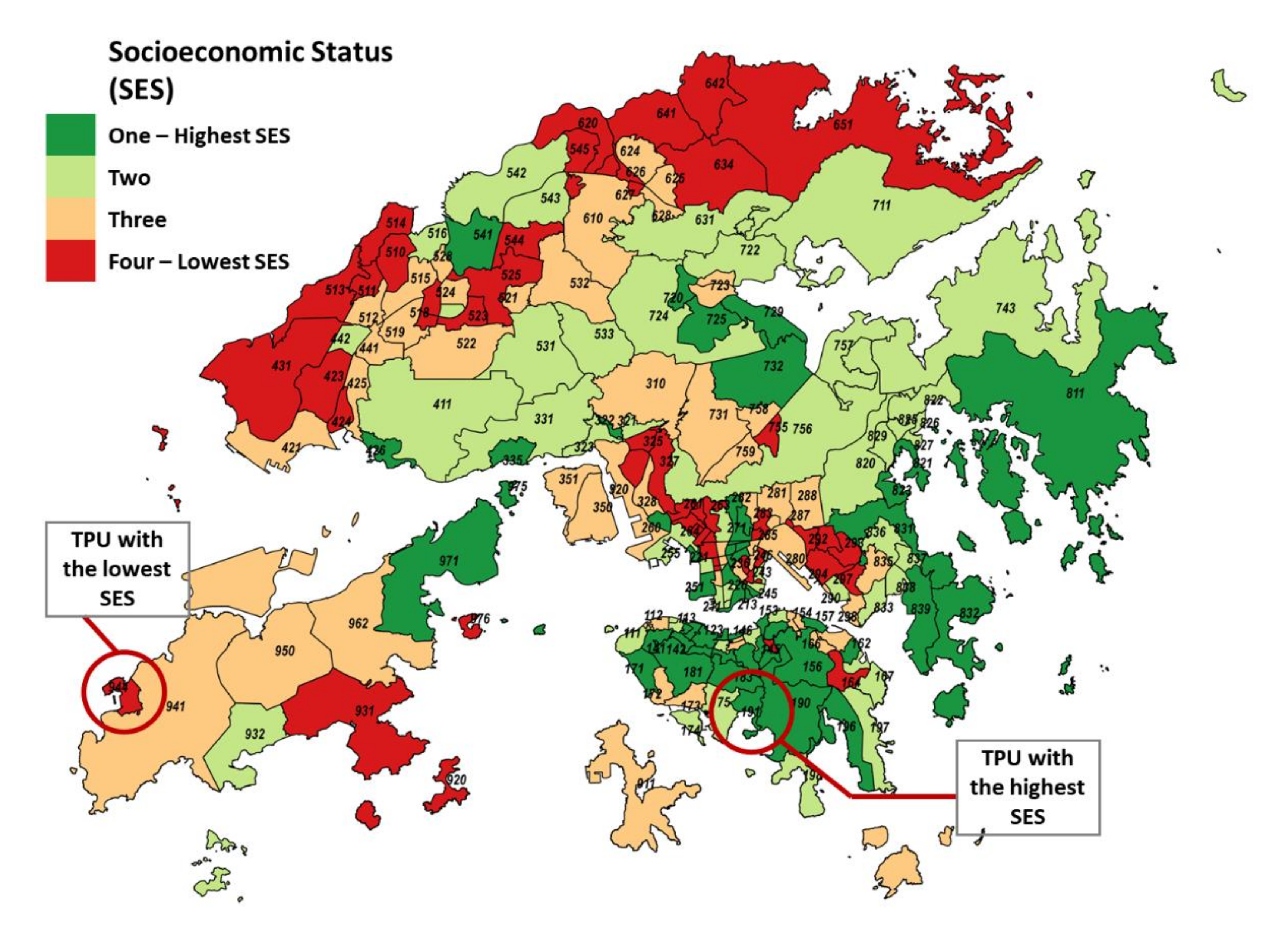 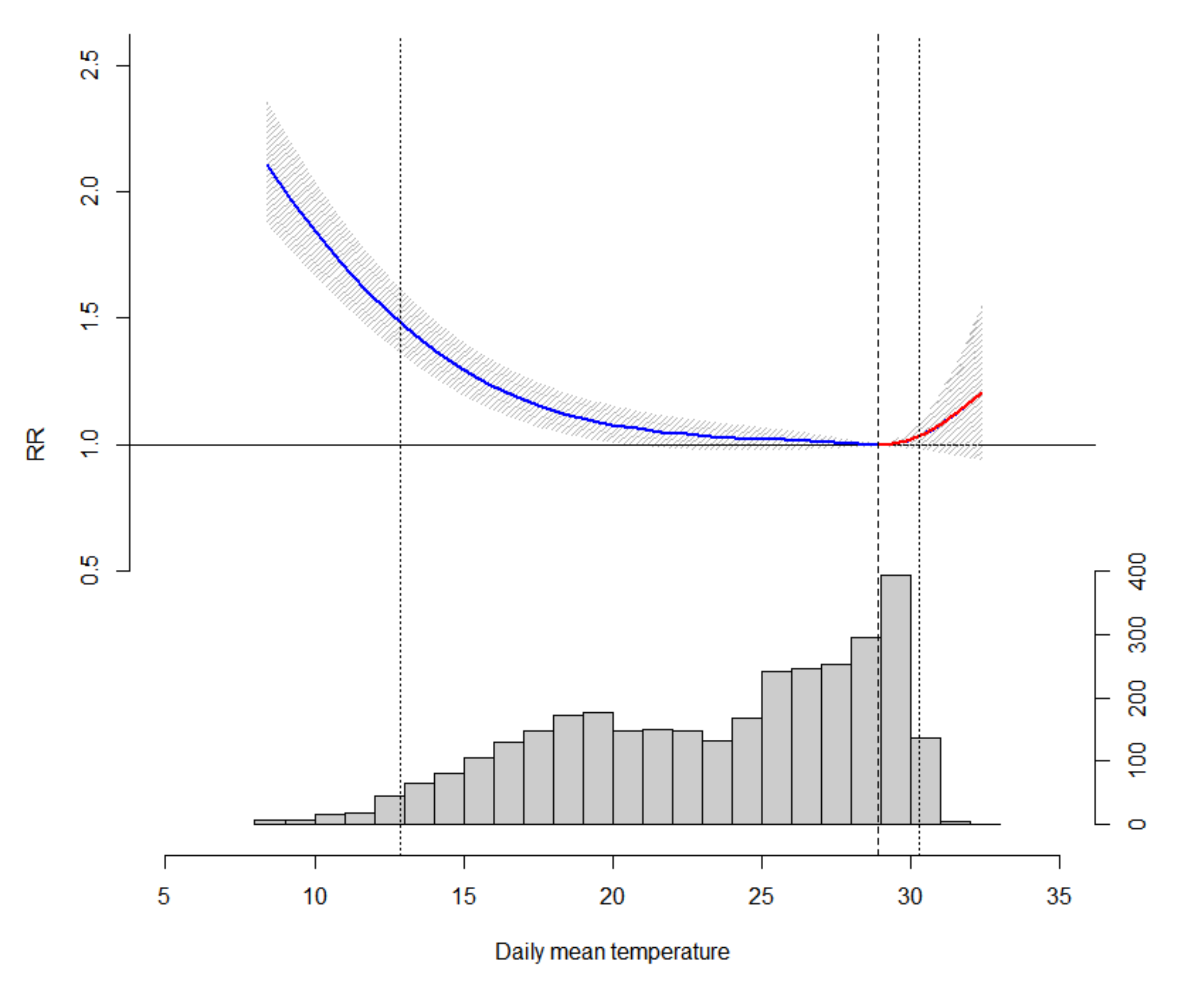 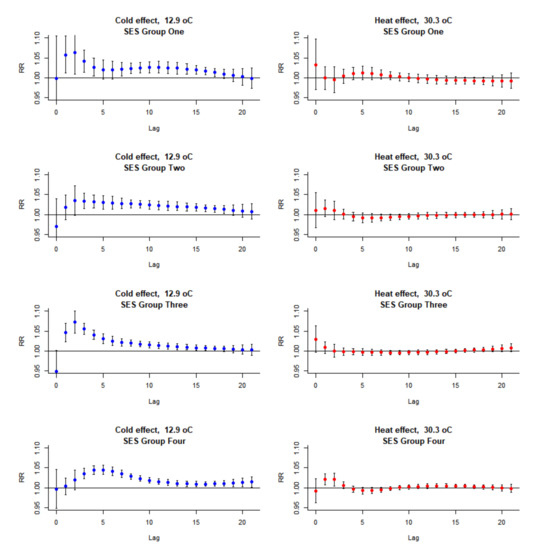 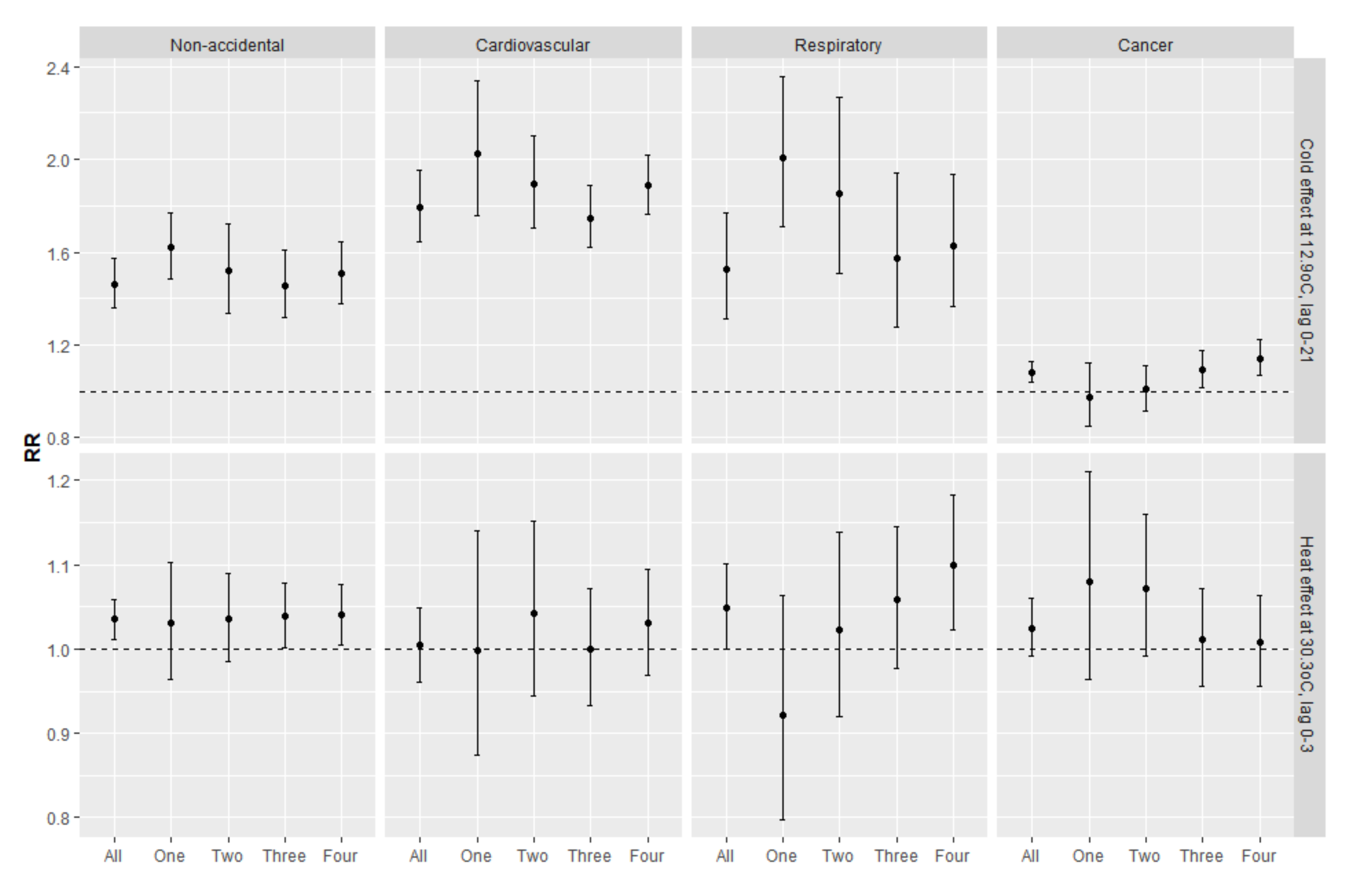 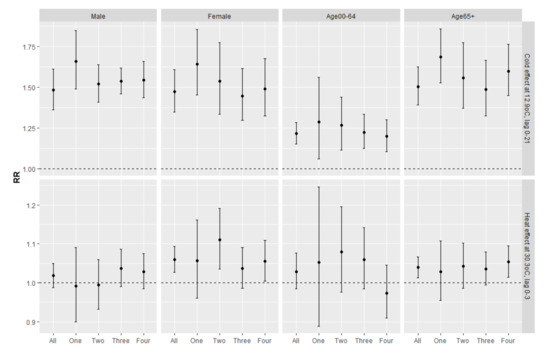