What Is Rural Adversity, How Does It Affect Wellbeing and What Are the Implications for Action?
Previous Article in Journal

The Prevalence of Cognitive Impairment on Admission to Nursing Home among Residents with and without Stroke: A Cross–Sectional Survey of Nursing Homes in Ireland

The organic geochemistry of six oil samples from the offshore Block 17 (Lower Congo Basin, northwestern Angola) was studied by a combination of classical biomarker and extended diamondoid analyses to elucidate source rock facies, the extent of biodegradation, and thermal maturity. Based on molecular data, oils are interpreted as depicting a mixture of two pulses of hydrocarbon generation probably from the Bucomazi and Malembo formations. Geochemical results also gave evidence of mixing of a lacustrine siliciclastic-sourced oil charge and a second more terrestrially derived oil type in the samples analyzed. A single genetic oil family was identified through hierarchical cluster analysis; however, two groups of oils were identified on the basis of their biodegradation levels using the Peters/Moldowan scale. Lower and upper Malembo oils have a slight depletion and a notable absence of n-alkanes, suggesting PM levels of 1 and 2, respectively. Most molecular maturity parameters of the oil samples suggest a maturity level equivalent to the onset of the peak of the oil generative window. View Full-Text
Keywords: Block 17; mixed oils; QEDA analysis; PM biodegradation scale; Lower Congo Basin Block 17; mixed oils; QEDA analysis; PM biodegradation scale; Lower Congo Basin
►▼ Show Figures 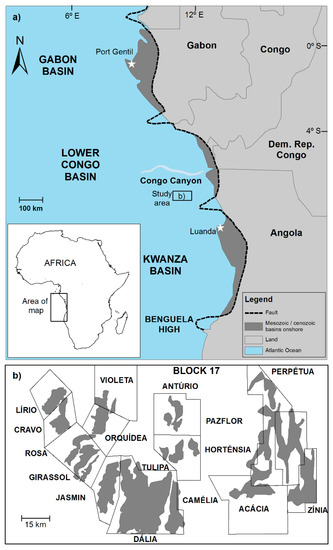