Cancer survivors suffer from emotional distress, which varies depending on several factors. However, existing emotion management programs are insufficient and do not take into consideration all of the factors. Social media provides a platform for understanding the emotions of the public. The aim of this study was to explore the relationship between the public’s emotions about cancer and factors affecting emotions using social media data. We used 321,339 posts on cancer and emotions relating to cancer extracted from 22 social media channels between 1 January 2014, and 30 June 2017. The factors affecting emotions were analyzed using association rule mining and social network analysis. Hope/gratitude was the most frequently mentioned emotion group on social media followed by fear/anxiety/overwhelmed, sadness/depression/loneliness/guilt, and anger/denial. Acute survival stage, treatment method, and breast cancer were associated with hope/gratitude. Early stage, gastrointestinal problems, fatigue/pain/fever, and pancreatic cancer were associated with fear/anxiety/overwhelmed. Surgery, hair loss/skin problems, and fatigue/pain/fever were associated with sadness/depression/loneliness/guilt. Acute survival stage and hair loss/skin problems were associated with anger/denial. We found that emotions concerning cancer differed depending on the cancer type, cancer stage, survival stage, treatment, and symptoms. These findings could guide the development of tailored emotional management programs for cancer survivors that meet the public’s needs more effectively.
Keywords: social media; emotional analysis; cancer; association rule mining; social network analysis social media; emotional analysis; cancer; association rule mining; social network analysis

Cancer is a significant disease burden worldwide. In Korea, cancer-related deaths accounted for 26.5% of all deaths in 2018, and cancer has been ranked as the leading cause of death since 1983 [1]. However, with the recent advances in cancer prevention, early detection, treatment, and follow-up care, the five-year survival rate for all cancers combined improved from 44.0% during 1996–2000 to 70.4% during 2013–2017 in Korea [2]. Since the life expectancy of cancer patients has increased, cancer survivors may face physical and emotional hardships from cancer-related and treatment-related short-term, long-term, and late health effects. Cancer survivors experience various physical challenges, such as physical impairment, severe fatigue, vomiting, and loss of appetite. They also face numerous emotional problems, including anger, fear, anxiety, depression, and loneliness, throughout the cancer trajectory. Many cancer survivors suffer from severe emotional distress, which can impair their ability to cope with cancer effectively and impact their quality of life. Anxiety and depression, which are most common among cancer survivors, have been reported to result in poor adherence to cancer treatment, poor cancer survival, and increased risk of suicide if not properly managed [3,4]. Emotional distress in cancer survivors has been associated with several patient and disease characteristics, such as age [5], gender [6], cancer type [7], and stage [7,8]. Hence, cancer survivors are increasingly interested in how to deal with these chronic emotional challenges. The general public also has an increasing need for information concerning cancer-related emotion because they may have cancer survivors around them as family members, friends, or co-workers [9].
The National Cancer Institute and the American Cancer Society (United States), as well as Cancer Research UK (UK), provide comprehensive cancer information on their websites. They also provide information on emotional problems experienced by cancer survivors, as well as providing information regarding the management of emotions. However, the emotions experienced by cancer survivors may vary depending on the gender, age, cancer type, and cancer stage. Thus, it is necessary to provide tailored information on emotional management, which requires a deep understanding of the emotions experienced by the public regarding cancer. Recently, the use of data obtained from social media has been proposed as a novel approach to understand the public’s emotional reaction to it. Social media platforms, such as social networking services (SNS), internet blogs, and online communities, have gained increasing popularity with the spread of smartphones and the internet over the last decade. Through these platforms, individuals report personal experiences, opinions, and emotions about cancer, sharing them with others in real-time [10]. Social media posts can be very useful in understanding the public’s emotions relating to cancer. For example, Crannell et al. [11] analyzed 146,357 tweets from cancer survivors and found that patients with cancer with favorable prognoses had higher happiness scores than patients with cancers with poor prognoses. However, this and other similar studies using social media data were limited to only one emotion [11] or classified emotions only as positive, negative, or neutral [12,13,14,15]. Thus, these studies did not provide a comprehensive insight into the public’s various emotions relating to cancer, such as depression, anxiety, hope, and anger. Additionally, social media data were collected in the previous research using only a few keywords for each topic of interest, which might not be sufficient to capture the full scope of emotions relating to cancer. As social media posts are written in colloquial language, consumer terms must be used to collect social media data. Thus, a list of concepts and terms for emotions about cancer used by the consumers provides a more appropriate framework for the collection and analysis of such data.
In this study, we used a cancer ontology previously developed by the authors [16] as a framework for social media data collection and analysis to investigate the public’s emotions concerning cancer. The ontology contained nine superclasses (cancer type, prevention, diagnosis, treatment, prognosis, risk factor, symptom, dealing with cancer, and emotion), 213 class concepts, and 4061 synonyms. The emotion superclass, which was one of the nine superclasses, was composed of nine classes (denial, anger, overwhelmed, anxiety, depression, loneliness, guilt, hope, and gratitude) with 454 synonyms. The synonyms included colloquial expressions (heteronyms, abbreviations, and slang) used by the public in daily life, which are useful for collecting social media data. This study explores the relationship between the public’s emotions about cancer and the factors affecting these emotions by association rule mining and social network analysis. The relationship between the public’s emotions relating to cancer and the factors affecting these emotions identified in this study will provide a framework for establishing tailored health information that supports the management of emotions.

In this study, we used 321,339 posts on cancer and cancer-related emotions. These posts were obtained from online cafés (online communities) operated by Naver and Daum, internet blogs operated by Naver, Daum, Tistory, and Egloos, Twitter, and 15 message boards (e.g., YouTube, Naver Knowledge iN, Nate talk), between 1 January 2014, and 30 June 2017, in Korea. Naver and Daum are the two largest online platforms in Korea. Tistory and Egloos are blogging platforms in Korea.

We collected posts on cancer and cancer-related emotions. As search keywords, we used 302 terms for concepts and synonyms of the cancer type superclass (such as malignant cancer, colon cancer, brain cancer, liver cancer, and breast cancer) and 454 terms for concepts and synonyms of the emotion superclass (such as surprise, embarrassment, contempt, anger, and worry) contained in the cancer ontology developed by the authors. As stop keywords, we used 418 terms (such as malicious virus). We collected posts on cancer, from which we then selected posts on emotions relating to cancer.
Of the 1,854,497 posts on cancer, 434,299 posts included keywords indicating at least one emotion. Of these, 112,960 posts contained advertising keywords (such as detoxification) and were excluded. Finally, a total of 321,339 posts were selected for analysis. Terms were extracted from the posts using ontology-based natural language processing (NLP). The data collection and NLP procedures were performed in collaboration with SK Telecom Smart Insight, a Korea-based big-data marketing platform. The company used web crawler and Java-based NLP tools, which were developed within the company. Each document was word tokenized and mentions of emotions and factors related to emotions in each document were identified using terms in cancer ontology.
The study was approved by the Institutional Review Board of the Seoul National University (IRB No. 1802/001-006). Collected posts did not have any identifiable personal information.

We classified social media according to the post’s length, as internet blogs, online cafés, and message boards allow for long posts, whereas Twitter posts are limited to 140 characters. We performed social network analysis to examine and visualize relationships between emotion groups or emotion-related factors that appeared together in each post in the two groups. The nodes in the network represent the emotion groups and emotion-related factors, while the edges indicate relationships between the nodes. Node activity was determined based on the degrees corresponding to the number of direct connections to the node. The strength of the relationship between nodes was assessed based on the edge weights corresponding to the number of interactions [20]. The network of the relationships between emotion groups and emotion-related factors was constructed using NetMiner 4.4.3.b (Cyram Inc., Seoul, Korea).

The relationship between emotion groups and emotion-related factors was assessed using association rule mining. The top five association rules with the highest lift are shown in Table 2.

We explored the relationship between the public’s emotions about cancer and the factors related to these emotions using social media data. By using consumer terms in the cancer ontology, we could collect comprehensive social media data related to cancer written by the consumers. We found that the most frequently mentioned emotion group was hope/gratitude, and general public engages in active social media activities during the acute survival stage, when they feel various emotions. Thus, it is especially important to manage the emotions of cancer survivors in the acute survival stage. Additionally, the usage patterns of social media channels differed depending on the age and cancer type. Younger generations or leukemia were mentioned more in social media pages, such as internet blogs and Twitter threads, created by affected individuals, whereas older people or gallbladder cancer were mentioned more in social media pages created by others, such as online cafés. Thus, internet blogs or Twitter could be used for younger people and online cafés could be used for older people as the primary social media channel for managing the emotions of cancer survivors. The findings of this study could guide the development of tailored emotion management programs for cancer survivors reflecting the general public’s needs by age, cancer type and stage, treatment type, symptoms, and survival stage.

This study was supported by a grant from the National R&D Program for Cancer Control, Ministry of Health and Welfare, Republic of Korea (No.1720250) and the National Research Foundation of Korea (NRF) funded by the Ministry of Science and ICT (NRF-2018R1A2A2A05022021). 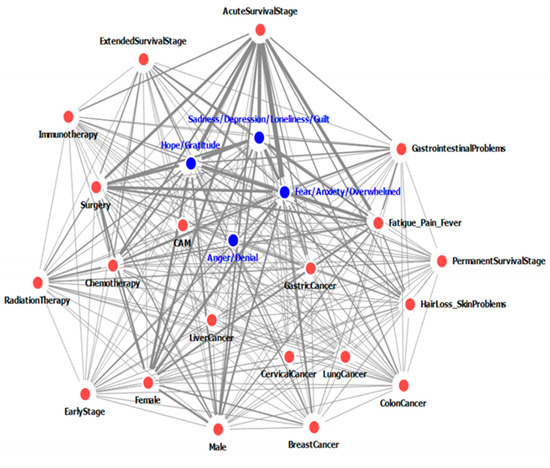 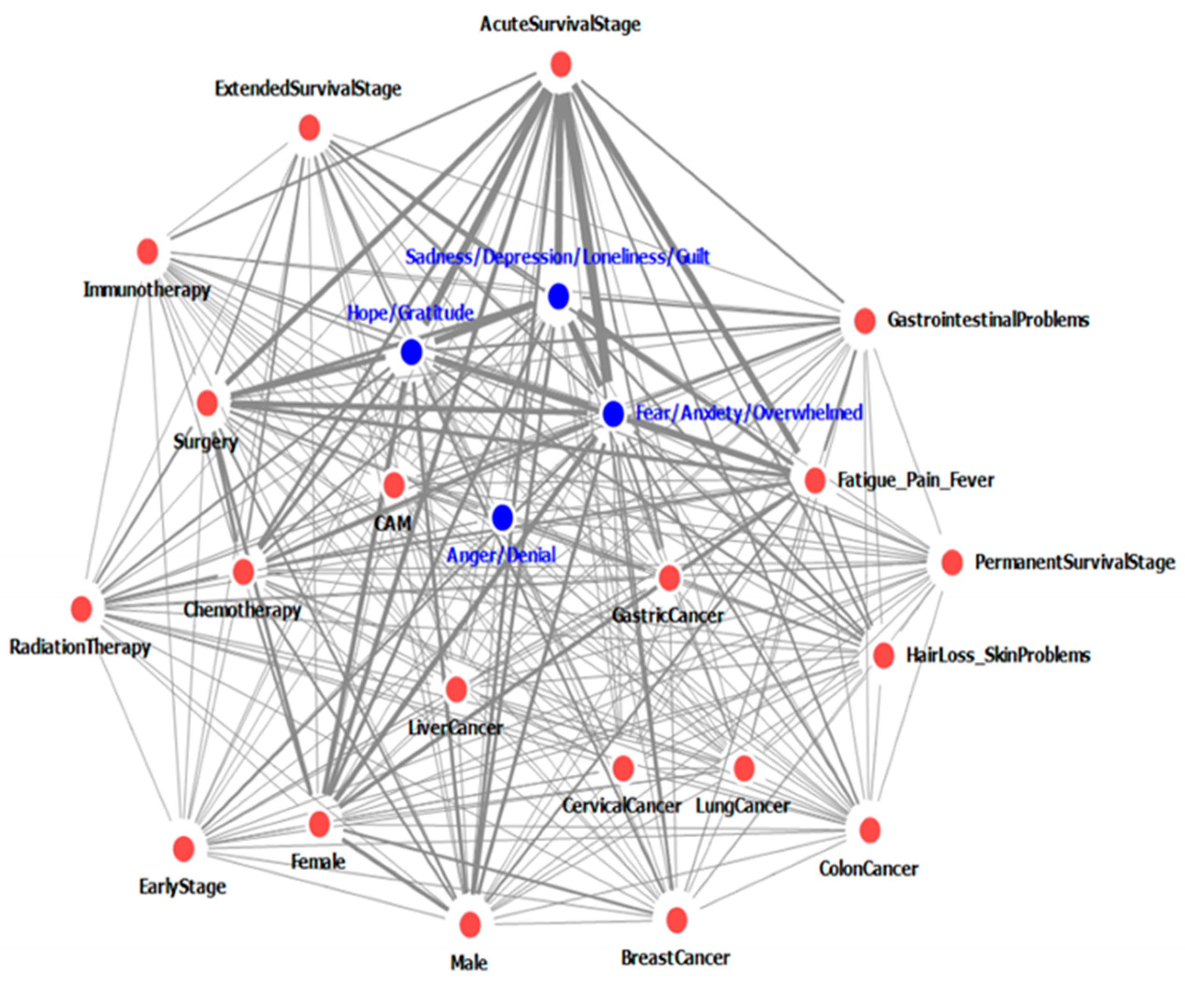 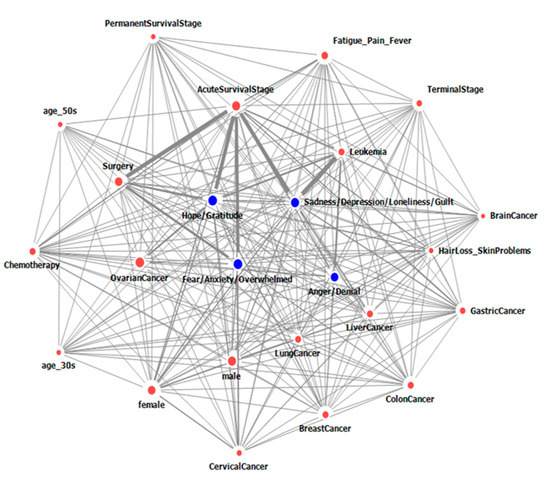 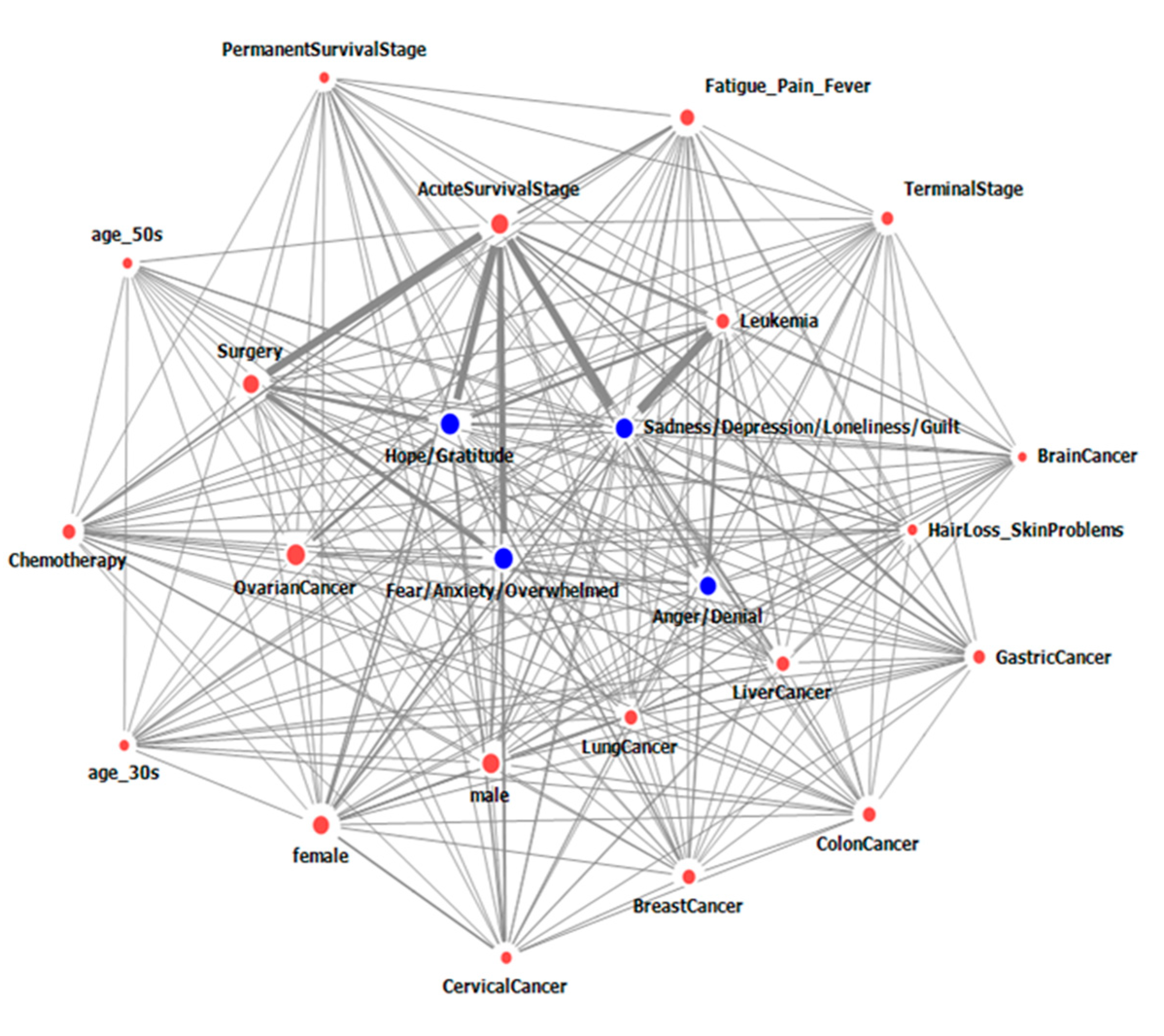