:
During the coronavirus-19 disease (COVID-19) pandemic, the basic strategy that is recommended to reduce the spread of the disease is to practice proper hand hygiene and personal protective behaviors, but among adolescents, low adherence is common. The present study aimed to assess the gender-dependent hand hygiene and personal protective behaviors in a national sample of Polish adolescents. The Polish Adolescents’ COVID-19 Experience (PLACE-19) Study was conducted in a group of 2323 secondary school students (814 males, 1509 females). Schools were chosen based on the random quota sampling procedure. The participants were surveyed to assess their knowledge and beliefs associated with hand hygiene and personal protection, as well as their actual behaviors during the COVID-19 pandemic. The majority of respondents gave proper answers when asked about their knowledge. However, females displayed a higher level of knowledge (p < 0.05). Most of the respondents declared not leaving home, handwashing, using alcohol-based hand rub, avoiding contact with those who may be sick, and avoiding public places as their personal protective behaviors. They declared using face masks and gloves after the legal regulation requiring people to cover their nose and mouth in public places was enacted in Poland. Regarding the use of face masks and not touching the face, no gender-dependent differences were observed, while for all the other behaviors, females declared more adherence than males (p < 0.05). Females also declared a higher daily frequency of handwashing (p < 0.0001) and washing their hands always when necessary more often than males (68.2% vs. 54.1%; p < 0.0001). Males more often indicated various reasons for not handwashing, including that there is no need to do it, they do not feel like doing it, they have no time to do it, or they forget about it (p < 0.0001), while females pointed out side effects (e.g., skin problems) as the reason (p = 0.0278). Females more often declared handwashing in circumstances associated with socializing, being exposed to contact with other people and health (p < 0.05), and declared always including the recommended steps in their handwashing procedure (p < 0.05). The results showed that female secondary school students exhibited a higher level of knowledge on hand hygiene and personal protection, as well as better behaviors, compared to males. However, irrespective of gender, some false beliefs and improper behaviors were observed, which suggests that education is necessary, especially in the period of the COVID-19 pandemic.
Keywords:
Coronavirus-19; COVID-19; SARS-CoV-2; hand hygiene; personal protective behaviors; adolescents; national population-based study; PLACE-19 Study

The PLACE-19 Study was conducted in Poland on a national sample of Polish secondary school students and analyzed their hand hygiene and personal protective behaviors. The schools were chosen based on the random quota sampling procedure conducted for each region of Poland (within voivodeships and counties) in cooperation with the local boards of education. According to the sampling procedure, secondary school students aged 15–20 years were invited to participate. In Poland, secondary school education is not compulsory, but the vast majority of adolescents are taking it up, as education is compulsory until the age of 18 years [36]. Thus, for the secondary schools in Poland, the net enrollment rate (NER) is estimated as 89.38% [37].
The present study was carried out at the Institute of Human Nutrition Sciences, Warsaw University of Life Sciences (WULS-SGGW). It was conducted in accordance with the Declaration of Helsinki, and all the procedures associated with sampling and data gathering were approved by the Ethics Committee of the Institute of Human Nutrition Sciences (WULS-SGGW).
Poland is divided into six main geographic regions with 16 administrative units, called voivodeships. The shape and size of these voivodeships depend on historic, cultural, economic, and geographic factors, and each voivodeship is further divided into counties [38]. To obtain a proportional sample of students from all the regions of Poland, the schools were invited to participate in the study based on their geographical distribution within voivodeships and counties. The random quota sampling procedure was applied and two stages of stratified sampling were carried out (Table 1), as described in the previous study [39], to obtain the sample from each segment based on administrative units of Poland equally distributed within voivodeships/regions. It was based on random sampling of counties for voivodeships and random sampling of schools for counties.
The principal of each school chosen for the study was informed about the study purpose and that participation of their school in the study was voluntary and would be arranged by the local boards of education if necessary. If agreed, the principal forwarded an electronic link for the questionnaire to the students who expressed their will to participate voluntarily in the study. The applied questionnaire did not collect any personal or sensitive data, and all the answers were anonymous. If needed, after 1 week of the first stage and after 1 week of the second stage, the principal was sent a reminder about the study.
The inclusion criteria to be fulfilled by the students for participation in the study were as follows: a student of a chosen school, aged 15–20 years, who provide informed consent to participate. The exclusion criteria were as follows: lack of any data and presence of unreliable answers in the questionnaire.
Based on the described procedure, a total of 2323 secondary school students (814 males and 1509 females) were included in the study and provided complete and reliable questionnaires. The scheme of recruitment of the participants is presented in Figure 1.

The sample size was calculated for the population of Polish adolescents (2,170,464, based on the data from the Central Statistical Office (CSO) in Poland [40]), at the confidence level of 95% and margin of error of 5%, while a percentage of 50% was assumed and the required sample size was estimated as 384 respondents. Thus, the gathered sample of 2323 respondents was interpreted as sufficient.
The answers provided by the male and female respondents were compared using the chi2 test. p ≤ 0.05 was interpreted as a significant difference between groups. Statistical analysis was conducted using Statgraphics Plus for Windows 4.0 (Statgraphics Technologies Inc., The Plains, VA, USA).

The study showed that female secondary school students were characterized by a higher level of knowledge on hand hygiene and personal protection, and they exhibited better behaviors when compared to male respondents. However, irrespective of gender, some false beliefs and improper behaviors were observed among the respondents; thus, education is necessary, especially in the period of the COVID-19 pandemic.

All the authors contributed to the study conception and design, performed the research, analyzed and interpreted the data, wrote the paper, and have read and agreed to the published version of the manuscript.

This research was funded by the Polish Ministry of Science and Higher Education, within funds of the Institute of Human Nutrition Sciences, Warsaw University of Life Sciences (WULS) for scientific research.

We would like to thank Translmed Publishing Group (TPG), a proofreading and copyediting company, for helping in copyediting this manuscript. 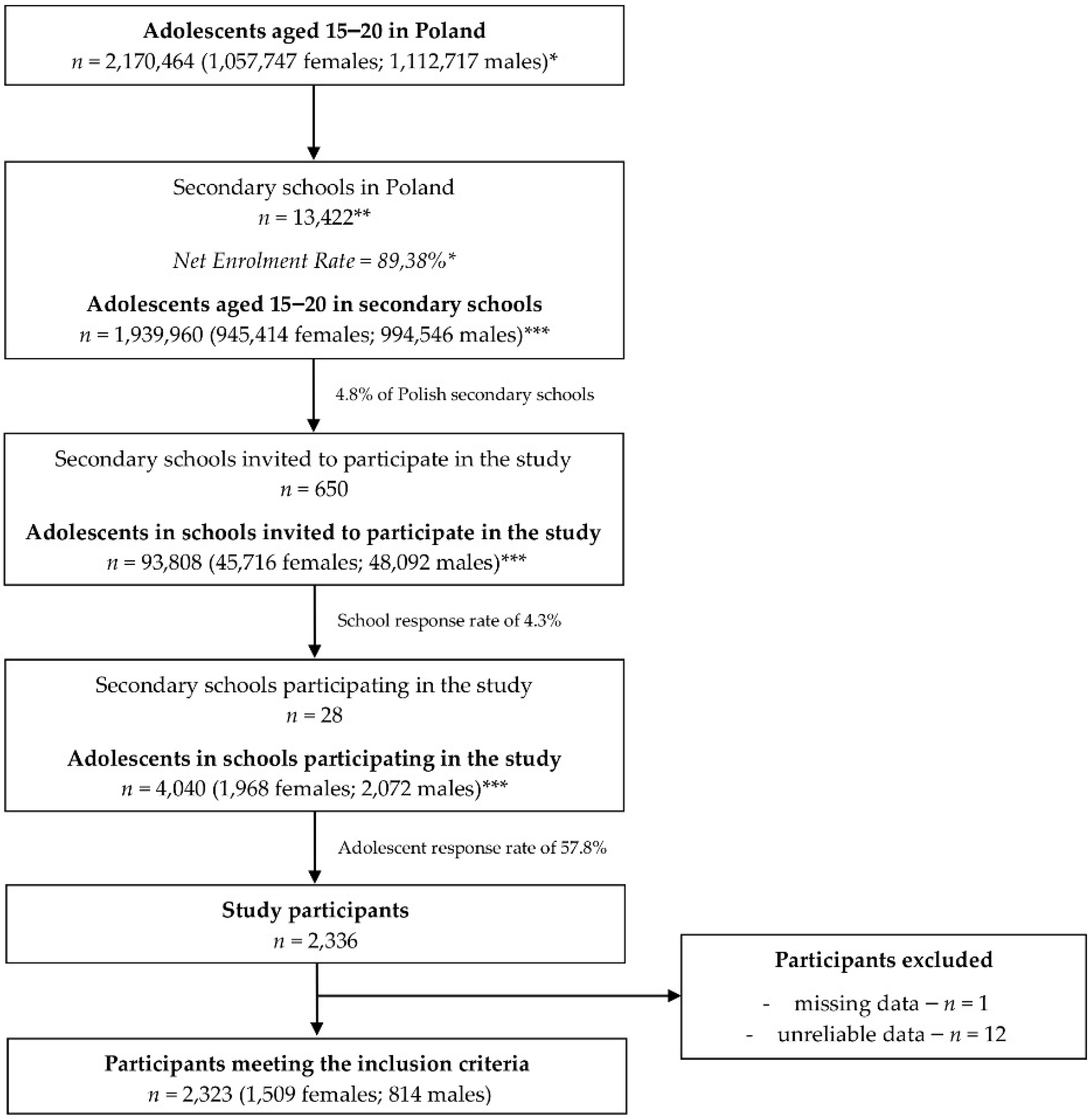