Schools are an important place for children’s exposure to electromagnetic fields, which may cause adverse health effects. To better understand environmental extremely low-frequency magnetic fields (ELF-MFs) exposure among elementary school students, we measured numeric values of ELF-MFs in five classrooms at four schools during digital learning class hours. The measurement of ELF-MFs was taken with an EMDEX II field analyzer. Specifically, we examined the level of exposure to ELF-MFs for each student’s seating position in the classroom. The results showed that ELF-MFs exposure levels were lower than those in the International Commission on Non-Ionizing Radiation Protection guidelines; however, there were significant differences in the level of magnetic field exposure at each school and at each student’s seat. The exposure to ELF-MFs at students’ seat positions was mostly caused by electrical appliances, electronic wiring, and distribution boxes, but the exposure level decreased as the distance increased. Therefore, it is important to design safe and appropriate environments for digital learning in schools, such as proper seating arrangements, to avoid ELF-MFs exposure to students as much as possible. Future studies should measure ELF-MFs levels in other areas and investigate the effects of exposure to ELF-MFs during school hours on children’s health.
Keywords: school; extremely low-frequency magnetic fields; measurement; exposure level school; extremely low-frequency magnetic fields; measurement; exposure level

Electromagnetic fields (EMFs) exist wherever electricity is generated, transmitted or distributed in power lines or cables, or used in electrical appliances. Since the use of electricity is an integral part of modern life, these fields are ubiquitous in our environment [1]. The use of electrical devices has increased every year due to increasing demands and population growth; thus, the possibility of exposure to EMFs has also increased. Therefore, there is growing public concern that EMFs exposure may cause adverse health effects in children. Since the nervous and immune systems of children are still developing, it is possible that they could be more sensitive to EMFs [2,3,4,5].
Exposure to external electric and magnetic fields at extremely low frequencies induces electric fields and currents inside the body [1]. Several epidemiological studies have demonstrated an association between exposure to extremely low-frequency magnetic fields (ELF-MFs) and childhood leukemia [6,7,8,9,10,11], which has led to their classification by the International Agency for Research on Cancer (IARC) as a “possible human carcinogen” (Group 2B) [1,12] in 2002. The association between exposure to ELF-MFs and the risk of childhood cancer has been extensively investigated in epidemiological studies [13,14,15,16]. Studies on disorders of cognitive function [17,18,19], disorders of memory performance, headaches, and sleep disorders [20,21] in relation to EMFs have also been conducted.
It is essential that exposure limits be implemented in order to protect against the established adverse effects of exposure to ELF-MFs [1]. So far, only acute effects have been established, and there are several international exposure limit guidelines designed to protect against these effects [22,23]. In some countries, such as Switzerland, Germany, and Sweden, environmental protection facilities such as kindergartens and elementary schools have provisions for separation distances and facility limits to protect children from ELF-MFs emitted from power facilities, base stations, broadcasting stations, etc.
A school is an important place for children’s exposure to ELF-MFs because they spend 7–8 h a day there. Although ELF-MFs levels measured in schools are commonly lower than measured residential fields [24], in order to effectively assess health risks, such as the assessment of ELF-MFs, exposure in schools should not be neglected. Additionally, few studies have measured ELF-MFs at each student seat and confirmed the distribution in a classroom. Therefore, the purpose of this study was to measure the levels of exposure to ELF-MFs during class hours in order to investigate the digital learning environment at school. The study findings could be used as a basis for establishing a safe and appropriate environment in terms of ELF-MFs for children.

This cross-sectional study was conducted to examine the distribution and level of exposure to ELF-MFs during digital learning class hours in elementary schools in Seoul, South Korea.

This study was conducted at elementary schools that indicated their intention to participate in the research. In December 2019, ELF-MFs were measured at five digital learning classrooms across four elementary schools. In each classroom, ELF-MFs were measured while maintaining the same environment as usual, and environmental factors such as temperature, arrangement and size of desks, and location of windows, doors, and electrical appliances were measured.
Additionally, the distribution of ELF-MFs in the classroom was assessed according to height (50 cm, 100 cm, 150 cm) at seven points (Figure 1). Additionally, ELF-MFs were measured at each student seat and the teacher seat for three separation distances (0 cm, 10 cm, 20 cm, 50 cm) from the computer monitor. ELF-MFs were also measured for electrical appliances and power supplies capable of emitting ELF-MFs in the classroom at each separation distance.

In this study, the professor and researchers at the Department of Health and Safety Engineering, experts in measuring EMFs, directly measured ELF-MFs. The equipment used for measuring ELF-MFs was EMDEX II (ENERTECH Inc., Greenville, IL, USA), which is typically used for measuring 60 Hz ELF-MFs such as those in household appliances. This instrument has an analytical sensitivity of 0.01 μT for the magnetic field at the maximum analysis sensitivity, and the maximum analytical value is 300 μT. The measurable frequency band is 40–800 Hz, which accounts for most of the electromagnetic emission in the very low frequency range, and the fixed frequency used in Korea is 60 Hz. The accuracy of the measured values is measured as ±3% magnetic field, respectively.
Determining the measurement conditions can be done using the Event marker button and Toggle button, and the measured conditions can be viewed through the liquid-crystal display (LCD) window. After the measurements were taken, data were transferred to the main computer, and the measurements were analyzed with EMCALC 2007 (Enertech Consultants, Campbell, CA, USA), an exclusive program for these data.

The results of exposure to ELF-MFs were analyzed based on the electromagnetic exposure levels in the International Commission on Non-Ionizing Radiation Protection (ICNIRP) guidelines [12]. Descriptive statistics (i.e., maximum, minimum, median, mean, and standard deviation values) were used for describing the level of ELF-MFs exposure during class.

This study was approved by the Institutional Review Board of Korea University (KUIRB-2019-0225-01).

As digital learning increases, questions have been raised about the effects on children of exposure to ELF-MFs from electronic devices used in digital learning environments. Therefore, in order to understand the distribution of ELF-MFs intensity in the classroom, the exposure level of ELF-MFs was measured at each student seat in five classrooms and compared with the ICNIRP guidelines. All five classrooms in the study showed ELF-MFs exposure levels lower than the ICNIRP standard, but two classrooms showed higher exposure levels than other classrooms, with such high exposure levels being due to the effects of electric distribution boxes, electrical wirings, and electronic appliances. In the other three classrooms, these devices were also present; however, ELF-MFs exposure levels were low because of a sufficient distance and proper shielding of electrical wirings. Therefore, in order to minimize the level of children’s exposure to ELF-MFs, it is necessary to manage environments in school, such as measuring ELF-MFs, minimizing electronic devices and maintaining separation distance from them, and properly placing student seats.

This research was supported by Basic Science Research Program through the National Research Foundation of Korea (NRF) funded by the Ministry of Education (grant number: 2018R1D1A1B07051103).

We would like to thank Hong of the Department of Health and Safety Engineering, Inje University, who directly provided advice on electromagnetic fields measurement. We would also like to thank the four elementary secondary schools that participated in this research. 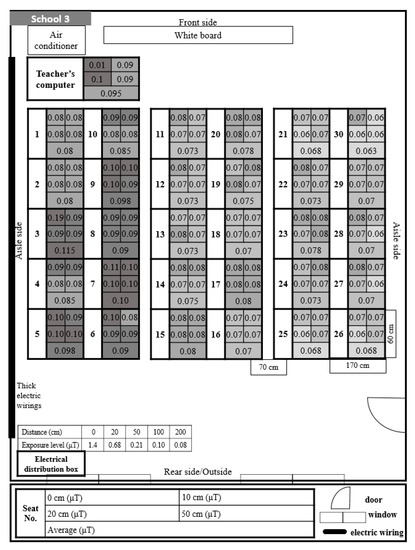 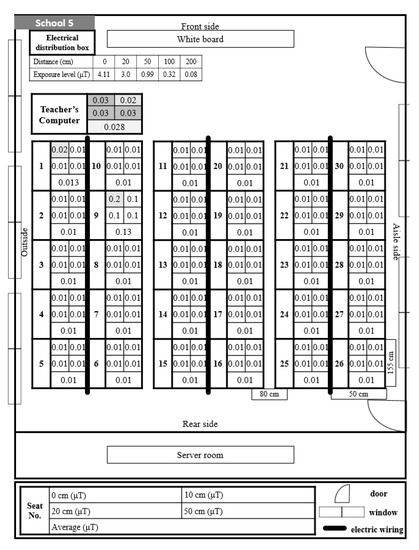