Acculturative Stress among Arab Students in Israel: The Roles of Sense of Coherence and Coping Strategies

Antimicrobial Efficacy of Fruit Peels Eco-Enzyme against Enterococcus faecalis: An In Vitro Study

Sodium hypochlorite (NaOCl), an effective endodontic irrigant against Enterococcus faecalis (EF), is harmful to periapical tissues. Natural pineapple-orange eco-enzymes (M-EE) and papaya eco-enzyme (P-EE) could be potential alternatives. This study aimed to assess the antimicrobial efficacy of M-EE and P-EE at different concentrations and fermentation periods against EF, compared to 2.5% NaOCl. Fermented M-EE and P-EE (3 and 6 months) at various concentrations were mixed with EF in a 96-well plate incubated for 24 h anaerobically. Minimum inhibitory concentration (MIC) and minimum bactericidal concentration (MBC) of M-EE and P-EE were determined via EF growth observation. EF inhibition was quantitatively measured and compared between different irrigants using the one-way analysis of variance (ANOVA), and different fermentation periods using the independent-samples T-test. M-EE and P-EE showed MIC at 50% and MBC at 100% concentrations. There was no significant difference in antimicrobial effect when comparing M-EE and P-EE at 50% and 100% to 2.5% NaOCl. P-EE at 6 months fermentation exhibited higher EF inhibition compared to 3 months at concentrations of 25% (p = 0.017) and 0.78% (p = 0.009). The antimicrobial properties of M-EE and P-EE, at both 100% and 50% concentrations, are comparable to 2.5% NaOCl. They could therefore be potential alternative endodontic irrigants, but further studies are required.
Keywords: eco-enzyme; endodontics; Enterococcus faecalis; fruit peels; root canal irrigants; sodium hypochlorite eco-enzyme; endodontics; Enterococcus faecalis; fruit peels; root canal irrigants; sodium hypochlorite

Endodontic treatment aims to eradicate infection and prevent reinfection within the root canal system. However, the complete elimination of debris and bacteria in the root canal system is impossible because of the complexity of the root canal anatomy [1]. The remnant bacteria, especially Enterococcus faecalis, are believed to be the most resistant microorganism that contribute to the persistent periradicular lesion after root canal treatment [2]. Different virulence factors, such as aggregation substance, lipoteichoic acid, and pheromones, have facilitated Enterococcus faecalis to survive in dentinal tubules up to 400 μm depth in a nutrient deficiency ecology environment and cause secondary infection [3].
The use of endodontic irrigants as an adjunct to mechanical debridement during root canal treatment is often emphasized for optimizing root canal disinfection. Among all endodontic irrigants, sodium hypochlorite (NaOCl) is widely accepted as the “gold standard”, because of its potent antibacterial and proteolytic activity. Its antibacterial efficacy, especially against Enterococcus faecalis, has been well established [4]. It is primarily attributed to chlorine, which induces irreversible oxidation of bacterial enzyme and disrupts the metabolic function of bacterial cells [5]. Nevertheless, its toxic effects on vital tissues in the event of accidental extrusion beyond root canal space have been documented. Damage could irreversibly occur in periradicular tissues involving soft tissue spaces and the neurovascular structures [6].
Natural plant extracts have been studied as a potential substitute for NaOCl as endodontic irrigants [7,8,9,10]. Fruit peels have displayed antimicrobial activities against a wide range of microorganisms, including Enterococcus faecalis [11,12]. Following fermentation, the antibacterial properties of fruit peels are further enhanced as organic substances are decomposed, yielding secondary metabolites known as bioactive compounds or phytochemicals [13,14]. The extraction of enzymes, organic acids, and phenolic compounds through the fermentation process is preferred over conventional methods that require costly solvents, involve the possible degradation of heat-labile compounds, and through which it is difficult to obtain high purity extracts [15]. Thus, fermented fruit peels, known as eco-enzyme, could be an alternative endodontic irrigant.
An eco-enzyme extracted from fermented unripe papaya (Carica papaya) peels is found to be rich in papain, which exhibits significant antibacterial efficacy against Enterococcus faecalis [16]. A study by Duarte and co-workers reported 0.8% of papain is equally effective as 1.0% NaOCl in inhibiting Enterococcus faecalis growth [17]. It has less harmful effects on vital tissues compared to NaOCl, as its proteolytic activities selectively target unhealthy tissues where α1-antitrypsin plasmatic antiprotease is absent [18]. Besides, phytochemicals found in the papaya peel eco-enzyme demonstrate a potential anti-inflammatory effect, which minimizes the chronic inflammatory process and tissue destruction, particularly in cases of apical periodontitis [19].
Similarly, eco-enzyme derived from pineapple (Ananas comosus) and orange (Citrus aurantium L.) peels have been shown to have antimicrobial as well as anti-inflammatory properties [20]. The synergistic effect of the two eco-enzymes increases the potency of their antimicrobial activity against a wide range of bacteria [21]. The high content of polyphenolic compounds and flavonoids in pineapple and orange peel extracts are found to be responsible for their excellent antimicrobial and antioxidant activities [22,23]. Bromelain from pineapple extracts is shown to be effective in killing Enterococcus faecalis by disrupting the peptidoglycan and polysaccharide components of bacterial cell membranes [24].
Numerous previous studies have looked into the antibacterial properties of different endodontic irrigants available on the market [25,26,27,28]. However, studies on eco-enzyme fermented from fruits and/or its peel as alternative endodontic irrigants are lacking. Hence, this study aimed to investigate the potential antibacterial activity using fermented fruit peel wastes (a mixture of pineapple-orange peel extracts and papaya peel extracts) at different concentrations and fermentation periods against Enterococcus faecalis in comparison to NaOCl.

Ethical approval was obtained from the research ethical committee of The National University of Malaysia (UKM PPI/111/8/JEP-2018-660) to conduct this in vitro study.

Two types of eco-enzyme extracts were prepared in this study according to the method described by Arun and Sivashanmugam (2017) [20]: (1) a mixture of orange peel (Citrus aurantium) and pineapple peel (Ananas comosus) eco-enzyme extract (M-EE) at four to six ratio and (2) papaya peel (Carica papaya) eco-enzyme extract (P-EE). Each eco-enzyme extract was prepared in triplicates by mixing 75 g fruit peels, 25 g molasses, and 250 mL tap water in airtight containers. Each of the mixtures was stored and fermented for 3 and 6 months. M-EE and P-EE with 100% concentration after the fermentation period were sterile filtered and further diluted to a concentration of 50%, 25%, 12.5%, 6.25%, 3.13%, 1.56%, and 0.78%, respectively, for antimicrobial efficacy test against Enterococcus faecalis.

Enterococcus faecalis ATCC® 29212TM bacterial strain was used in this study. The inoculum was prepared based on the Clinical and Laboratory Standards Institute (CLSI) protocol (2012) [29]. Enterococcus faecalis was cultured in brain-heart infusion (BHI) broth and incubated at 37 °C with 95% relative humidity for 24 h. The bacterial cell density was further adjusted to 0.5 McFarland Standards (1–2 × 106 CFU/mL).

Minimum inhibitory concentration (MIC) of both M-EE and P-EE extracts of different concentrations against Enterococcus faecalis was determined using CLSI (2012) protocol [29]. In brief, 50 μL of each of the following solutions: 2.5% NaOCl (positive control), BHI broth (negative control), M-EE and P-EE with different concentrations at a 3 and 6 months fermentation period, were mixed with 50 μL Enterococcus faecalis in a 96-well plate (Biologix, Selangor, Malaysia) and incubated under the anaerobic condition for 24 h at 37 °C. All samples were prepared in triplicates. The bacterial growth was observed with naked eyes and the appearance of the well plate was recorded as “no turbidity observed” (no bacterial growth) or “turbidity observed” (bacterial growth). Bacterial growth was also quantitatively measured using ELISA microplate reader (Thermo Fisher Scientific, Waltham, MA, USA) at 625 nm wavelength. Mean optical density (OD) of positive, negative, and tested groups were recorded and compared with its corresponding untreated control wells.

Minimal bactericidal concentration (MBC) of M-EE and P-EE against Enterococcus faecalis was determined by taking samples with no apparent bacterial growth in wells from MIC tests and cultured on BHI agar plates. After an incubation period of 24 h at 37 °C with 95% relative humidity, the agar plates containing M-EE and P-EE were inspected with the naked eye for any bacterial colonies growth.

Results were analyzed with the data collected from M-EE and P-EE of different concentrations at a 3 and 6 months fermentation period, NaOCl, and BHI broth, using Statistical Package for the Social Sciences (SPSS) Version 23 software (IBM, Armonk, NY, USA). The results from direct visualization in MIC and MBC tests were descriptively documented. The comparisons of mean difference in OD between M-EE and P-EE of different concentrations with 2.5% NaOCl (positive control group) and BHI broth (negative control group) at the two fermentation periods were tested using one-way analysis of variance (ANOVA). A univariate ANOVA was used to test within-subject effects and Bonferroni multiple comparisons were performed to detect differences in mean OD difference over the M-EE, P-EE, positive and negative control groups. The comparison of the mean difference between two fermentation periods for each tested group was analyzed using the independent-samples T-test. All tests were set at a significant level of 0.05.

The present study showed that the concentration of P-EE and M-EE at 50% and above exhibited significant antibacterial activity against Enterococcus faecalis. These results suggest that P-EE and M-EE could be exploited as a potential alternative to NaOCl as endodontic irrigants. However, further in vivo and clinical studies are required.

This research was funded by UNIVERSITY RESEARCH GRANT (GUP-2018-144) from The National University of Malaysia.

We wish to convey our utmost appreciation and gratitude to Dr. Ng Meei Yi and all the staff at Microbiology Laboratory, Faculty of Dentistry, The National University of Malaysia for their assistance and support throughout this research study. 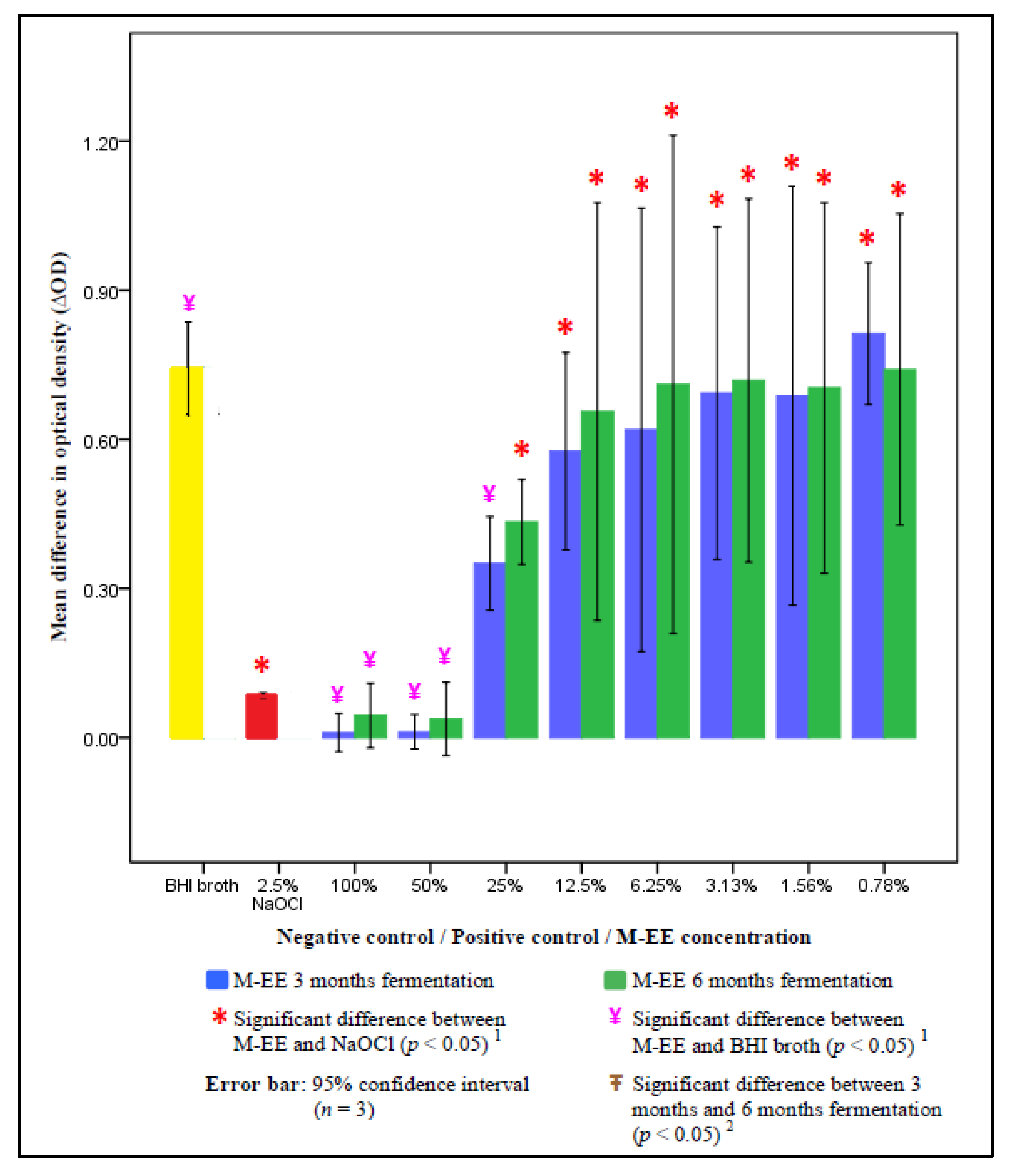 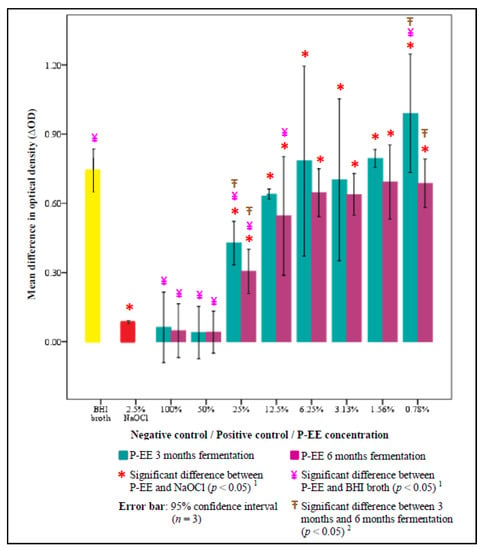 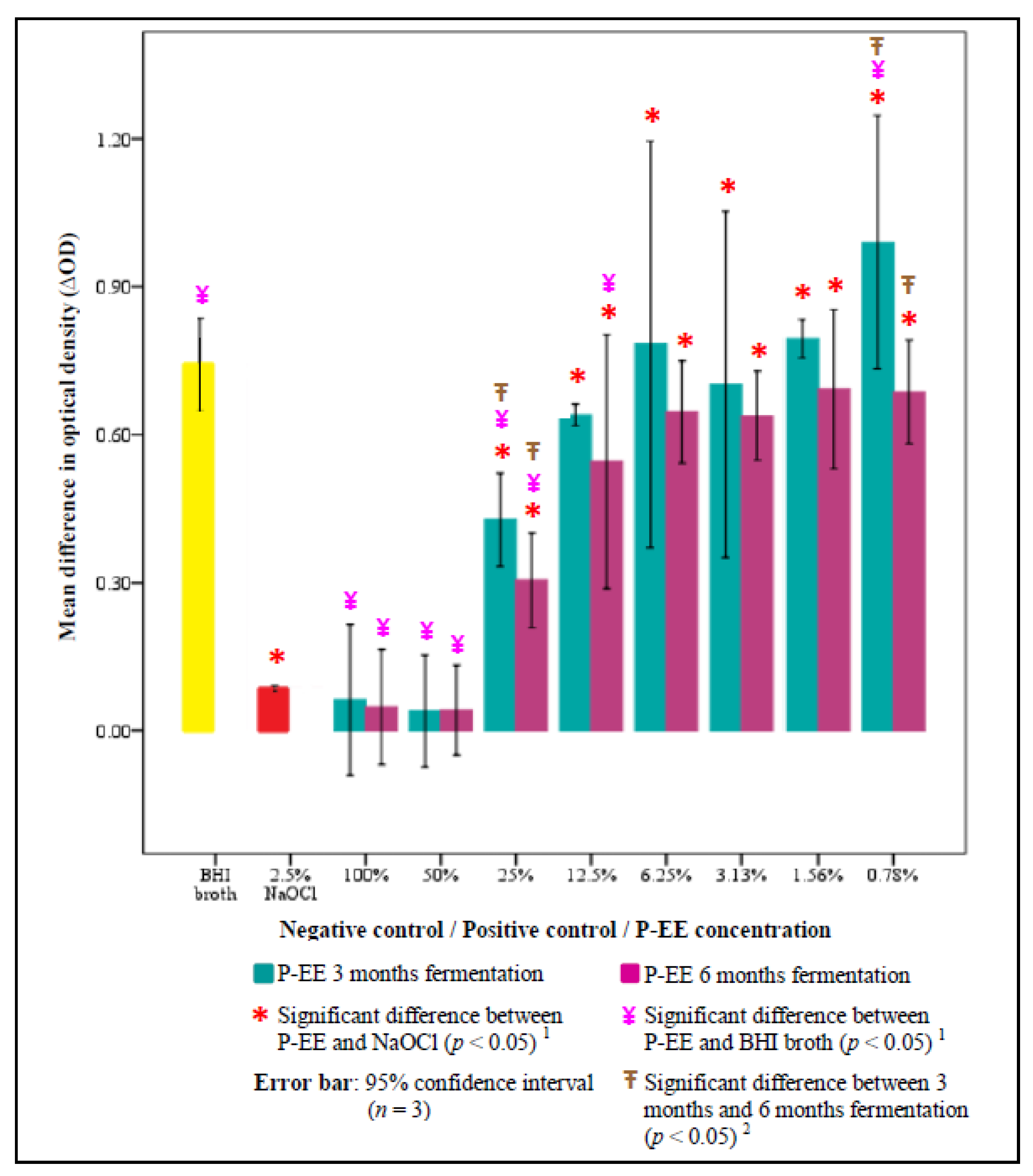