Effects of Gender and Age on Dietary Intake and Body Mass Index in Hypertensive Patients: Analysis of the Korea National Health and Nutrition Examination

Introduction: Many studies have been published, but none have pooled the useful evidence available in the literature to produce guidelines and health policies promoting healthy eating styles to prevent breast cancer (BC). The present study aimed to summarize the evidence produced to date, taking a judicious, critical approach to the quality of the studies analyzed. Methods: An umbrella review method was adopted, which is a systematic review of second-level studies, meta-analyses and literature reviews. Results: In all, 48 studies were considered: 32 meta-analyses, 4 pooled analyses, 5 systematic reviews, and 7 qualitative reviews. A higher intake of total meat, or red or processed meats, or foods with a high glycemic index, or eggs would seem to be associated with a higher risk of BC. Some foods, such as vegetables, would seem instead to have an inverse association with BC risk. One meta-analysis revealed an inverse association between citrus fruit and mushroom consumption and BC. Some nutrients, such as calcium, folate, vitamin D, lignans and carotenoids, also seem to be inversely associated with BC risk. The evidence is still conflicting as concerns exposure to other dietary elements (e.g., polyunsaturated fatty acids, dairy foods). Conclusion: Nutrition is one of the most modifiable aspects of people’s lifestyles and dietary choices can affect health and the risk of cancer. Overall, adhering to a healthy eating style may be associated with a significant reduction in the risk of BC. View Full-Text
Keywords: diet; cancer risk; breast cancer; cancer prevention; dietary intervention diet; cancer risk; breast cancer; cancer prevention; dietary intervention
►▼ Show Figures 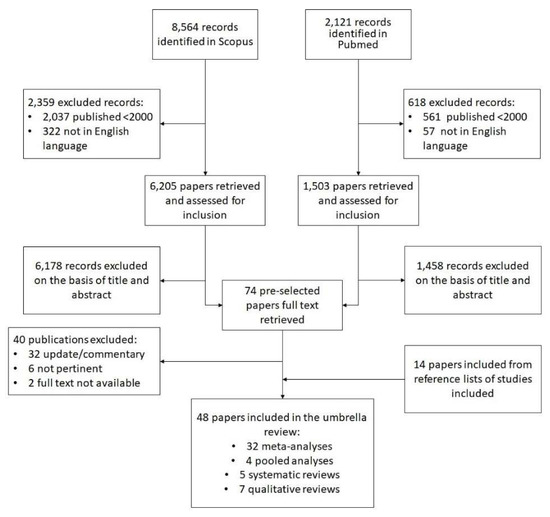